Ed. Note:  Santa Barbara art historian, curator and appraiser Alissa J. Anderson has a special affinity for desert paintings. She grew up in Lake Arrowhead and made frequent trips to Palm Springs as a youth. “I love the austerity of the desert,” she says. “That atmosphere. That silence. I love Swinnerton in particular. He captures the same loneliness that Edward Hopper has in his cityscapes.”

Many of Anderson’s clients, collectors of Western art, also pursue desert paintings.  In this article (it first appeared on Anderson’s blog), she appraises a Jimmy Swinnerton painting submitted by a reader. Swinnerton, a giant of the Coachella Valley art scene, spent his last days living on Pitahaya Street in Palm Desert.

For this month’s Art Appraisal of the Month I was thrilled to see a James Swinnerton (1875-1974) painting submitted. As an art appraiser for Anderson Shea Art Appraisals in Santa Barbara, I often appraise Western and California paintings — and there is just something about the desert that has long-inspired artists. In fact, the great American painter Georgia O’Keeffe’s most important work came only after she abandoned New York for New Mexico –never to return from the desert. 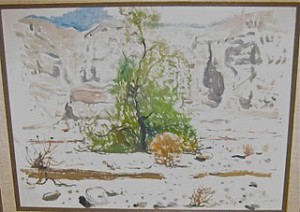 James (Jimmy) Swinnerton is certainly one of those painters who found their happiness in this vast, arid, and bewildering desert. For many artists, like Conrad Buff, Maynard Dixon, Clyde Forsythe, Fernand Lungren, Robert Rishell — the desert inspired artistic enlightenment. The abundant beauty that existed in the quiet of the desert became their muse.

James (Jimmy) Swinnerton was born in Eureka, California in 1875. Swinnerton was raised in Santa Clara and studied art at the San Francisco School of Design. As a young artist he became an illustrator for the San Francisco Examiner. While he briefly worked in New York, Swinnerton returned to Palo Alto, California. In the 1920s, he began traveling throughout the Southwest — painting desert scenes in Arizona, New Mexico, and California. He made frequent trips to the Navajo country, painting the Colorado River, dramatic desert buttes, and iconic big skies. He loved the four great North American deserts including the Great Basin, Sonoran, Mojave, and Chihuahuan — but also painted in Palm Springs, Santa Barbara, and throughout the West.

Artists like James Swinnerton made it their mission to explore America’s deserts through art. Just as the Hudson River School discovered spirituality in the Hudson River Valley and the California impressionist painters were inspired by the landscapes of the Pacific Coast, some artists found beauty in the desert.

Using a variety of techniques and styles, these painters explore the unseen virtues of the desert. Swinnerton’s contemporary, Conrad Buff (1875-1974)  a modernist, often painted Zion National Park, transforming desert buttes into geometrical, cubist forms. With a bold use of color and loose, sweeping brushstrokes – Buff’s purple rocks and pink cliffs depict the desert in a way not typically seen. Clyde Forsythe’s New Mexico painting capture the minimalist shapes and earthen tones of parched land, cliff, and sky. Maynard Dixon’s depictions of Tehachapi people and cattle are dwarfed by the ominous, thunderous sky and rolling hills. 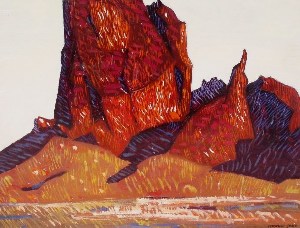 This month’s art appraisal is an oil sketch by James Swinnerton, entitled “Smoke Tree, Palm Springs.” Before beginning a painting, Swinnerton would complete a sketch in oil, in order to layout his composition. His finished works utilize ad photo-realist technique, whereas his sketches are much less detailed. In “Smoke Tree, Palm Springs,” Swinnerton juxtaposes the striking irony of the desert, depicting a parched tree swallowed by arid, rocky landscapes. Paintings like this are imbued with a certain loneliness and isolation, something inherent to the desert. The desert is a vast, hot, and often inhospitable place — but subtly beautiful as well.

Like the 19th century Romantic painters interested in the humbling power of nature over man, Swinnerton’s desert scenes rarely depict people. His paintings capture the expansive, alluring, and often mysterious qualities of a seemingly dry wasteland. He depicts the magnificence of monumental desert bluffs, quintessential desert skies, dramatic shadows cast upon an endless landscape, and the decorative radiance of simple sand and brush.

As a California art appraiser, I’ve found that collectors of Swinnerton’s paintings prefer his highly detailed desert landscapes — but the skill of Swinnerton’s work still makes this oil sketch of some value.

While the canvas appears to have some dirt and dust, “Smoke Tree, Palm Springs” is in good condition. A competitive demand exists for James Swinnerton’s paintings and this artwork is well painted, composed, and executed – placing my appraisal of the painting in the mid-range of Swinnerton’s market.

The Fair Market Value* of this painting would be estimated between $2,000-$3,000. A treasure indeed!

Please submit your painting, drawing, or sculpture for next month’s ART FIND appraisal. To be considered, mail a photo and brief description to: artsappraiser@gmail.com.

*©2010 Alissa J. Anderson. All Rights Reserved. None of the contents of this article may be reproduced, stored in a retrieval system, or transmitted in any form or by any means (electronic, mechanic, photocopy, recording, or otherwise) without the prior written permission of Anderson Shea Art Appraisals, and the appraiser’s signature.)

For more on Alissa Anderson, see:

Collectors, be sure to see Anderson’s article on investing in California art:

← Cady Wells and the Desert Modern
Elaine Mathews: Master of Rock and Earth →

23 comments for “An Appraiser Looks at Swinnerton”