If anyone can save the Salton Sea, I’m betting on Andrew Dickson. The Cal State U. Fullerton art professor has been quietly, intently focused on painting the Sea for 15 years. 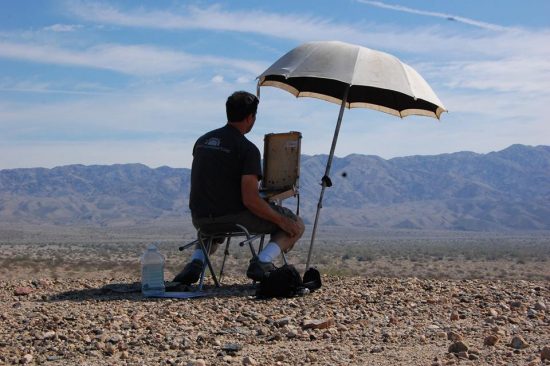 Andrew Dickson at the Salton Sea

Now you have a chance to study with him at his grandmother’s home in North Shore, February 27-March 1, 2015. To prove his desert worthiness, Andy recently powered through a summer AC outage–doing a series of charcoal drawings at Bombay Beach–with umbrella, ice cooler, sunscreen and lots of water.

He hopes to host ongoing workshops at his grandmother’s house and introduce more artists to the area. “I love bringing people out here,” he says. Around the country, artists are painting places they want to protect and the effort often pays off. The attention and devotion of landscape painters could be just the thing that tells the public: This Sea is worth saving.

Like millions of other Americans, La Quinta cove artist Diane McClary went to see the film Wild, about one woman’s journey on the Pacific Crest Trail. Unlike most viewers, though, she was surprised to see three of her paintings on the screen. As McClary wrote in her newsletter:

“Well over a year ago, I was contacted by the company that produced the film. They were interested in using some of my desert paintings in the movie. I granted them permission, but thoughts about it were quickly eclipsed by preparing for art festivals and constantly working on new paintings…

“There is a scene where Cheryl (Reese Witherspoon) is staying in a motel getting her gear together and preparing to take on ‘The Trail’. Hanging there on the walls of the motel room are three of my cactus paintings. You can probably imagine my surprise and excitement at seeing my work there on the big screen.”

Reese Witherspoon in the Movie “Wild”

Desert art fans and friends of Diane (the groups overlap considerably) share her excitement. For more on Diane and her unique series of “How to Paint the Desert” DVDs, see: www.DianeMcClary.com

When people call to ask about the value of a desert painting, I often refer them to Gary Fillmore, one of the very few experts in desert art anywhere. Now you have a chance to meet the Arizona-based appraiser, dealer, collector, author and independent scholar. He’ll be speaking on Western stagecoach artist Marjorie Reed, who lived for a time in Cathedral City, and died in Borrego Springs in 1996. Gary’s 2008  book All Aboard: The Life and Times of Marjorie Reed has already become a desert classic.

On February 27th, 2015, Gary’s evening lecture will cover Marjorie Reed’s life and work from her early childhood in Los Angeles–she was a prodigy who worked as a freelance graphic artist beginning at the age of 14–through her later years spent in the Anza-Borrego desert.

On Saturday Feb. 28,at  2 pm, Gary gives an overview talk–Early Painters of the Colorado Desert–recounting the lives and work of three of the most influential of the early California Desert painters: James Swinnerton, John Hilton and Carl Eytel.

The host is the Anza-Borrego Desert Natural History Association; stop by their well-stocked shop while you’re in town.

On Sunday, Feb 8, 2015, from 11-3 pm, The Agnes Pelton Society is hosting a tour of artists’ homes and historic pads. This is your chance to visit Pelton’s former home and studio. See the original diamond-scored concrete floors she trod, along with an impressive collection of early desert paintings amassed by owners Peter Palladino and Simeon Den. There are abundant riches to be found on this tour, including the historic Val Samuelson house (owned by photographer and early Cove resident Jeff Palmer), the studios of desert artists Ray Lanowy and Jessica Schiffman, the historic adobe of artist Gary Borgstedt, and the historic home of Willard Price, a journalist and world-traveler who was a close friend of Agnes Pelton. 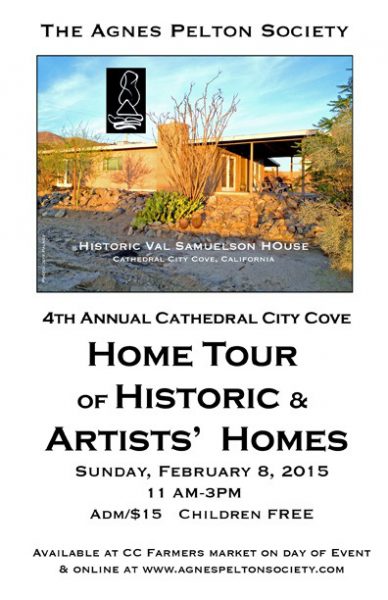 Palm Springs has been discovered…and discovered. If you’d rather be on the cutting edge, come to the Cathedral City Cove to experience the next best place for artists in the Coachella Valley. 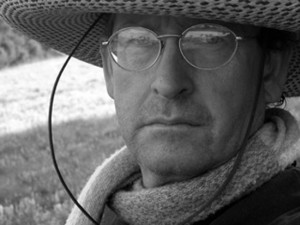 Now through March 11, 2015, see one of our favorite contemporary desert artists, Mark Kerckhoff, on display at Marcia Burtt Gallery in Santa Barbara. Mark has been a big influence on fledgling desert painters, perhaps because he has such a deep feeling for places–the building blocks of the landscape painting trade.

As he told Plein Air Magazine: “I love the freedom of being alone and away from people…I try to find places that seem like I’m the first person to come there and paint at that spot. I want to feel like a pioneer out there.”

Pick up the March/April 2015 issue of Fine Art Connoisseur, featuring contemporary artists of the desert. The desert focus of this elegant magazine is further evidence that the Smoketree School plays a growing role in California art.