When Arne Trettevik’s Alfa Romeo sputtered to a halt in Palm Springs in the late 1990s, it seemed his daring life was stalling out too. He had hitched dugout canoe rides in Belize, taught at Esalen and inspired consciousness pioneers such as Stanislav Grof.  Now–broke down and alone–he moved into a courtyard  cottage just off South Palm Canyon Drive, behind the current-day Knights Inn. 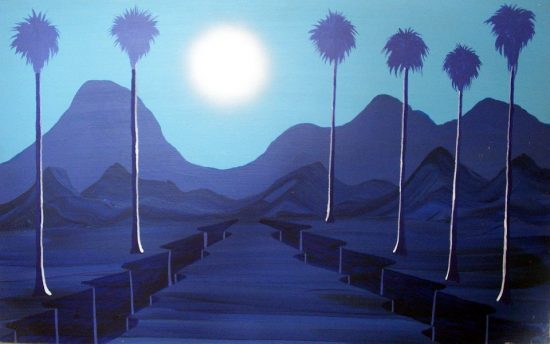 A persistent cough kept him housebound. Dust and dishes piled up in the apartment. Arne took to admiring the mountain (San Jacinto) out front and returned to the painting experiments he’d  pursued off and on for decades. As he worked–blues music playing in the background–his lifelong studies of anthropology and astrology coalesced in the desert landscape.

Arne died from pulmonary fibrosis in 1999. Sixteen years later, his paintings are stored in a part-time Airbnb rental in Palm Desert owned by the artist’s former wife, Carolyn Relei. Arne never sold paintings, never courted galleries, never hung out with artists. When he died, his entire collection ended up on Relei’s walls and in her garage. 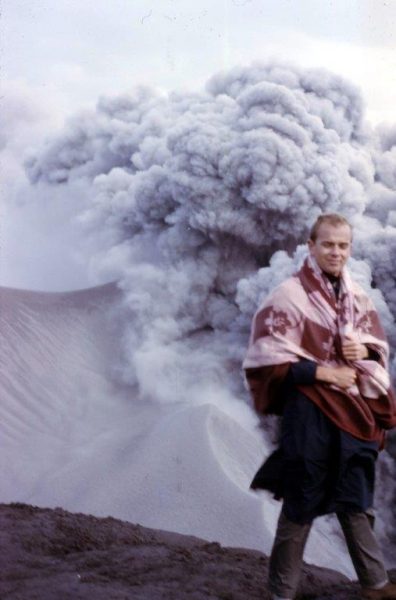 Carolyn first met Arne in an anthropology course at City College of San Francisco in 1962.  He would later complete degrees in anthropology, psychopharmacology and India studies at Sonoma State University. “He was only 23, but balding,” Carolyn says. “He looked like Mr. Hobbs, my anthropology teacher.”

Carolyn, then 18, looked up to Arne like a teacher. Throughout his life he attracted younger people seeking the enlightenment he seemed to possess. When Carolyn met him, he’d already completed a vision quest, of sorts, traveling through Mexico, Belize and Guatemala on a seven-month journey.

On later pilgrimages, he went to Costa Rica on a narrow gauge train with John Lily, Jr.  (son of the famous dolphin researcher); and he lived for a time with a Huichol family in Mexico. Because of Arne’s knowledge of astrology, the family dubbed him Star Shaman. “Arne pursued these peak experiences all his life,” says Carolyn. “There was no limit.” 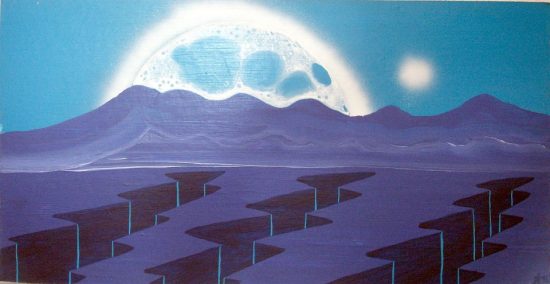 The Star Shaman was born Arnold Trettevik in Seattle in 1938. He grew up on a farm in Blaine, Washington, tending his father’s herd of 60 cows. But he chafed at farm life, escaping in science fiction and dreams of distant planets–themes that would show up in his desert paintings decades later. After leaving home he served as a radar operator in the US Air Force,  stationed in Morocco and Germany.

When Carolyn married the balding philosopher in 1963, she says: “My father was like ‘Oh my God.’ He was right. Arne was not practical. He could be your guru but he wasn’t going to pay the bills. He inspired a lot of people to study astrology and become vegetarians–but that’s not a career.”

Traveling in Mexico together, they frequented the salon of Cora van Milligen, a former Vogue model and activist for the Oaxacan Indians. “Opera singers, dancers, authors, the up-and-coming and the going-nowhere–they were all  there,” says Carolyn. It was at Cora’s that Arne met John Lily, Jr. and first tried psychedelics–the magic mushroom called hongo.

In the garage of Carolyn’s condo, she pointed out his very first painting, The Snail on the Trail, from 1967. She and Arne were then living near the Golden Gate Bridge, surviving on $140 a month on the GI Bill. They were reading Timothy Leary, studying astrology and taking LSD every Sunday.

These were the years of formal experimentation with LSD at respected institutions such as UCLA Medical School. Researchers used the drug in controlled experiments to probe human potential, as well as a treatment for alcoholism and psychiatric disorders. 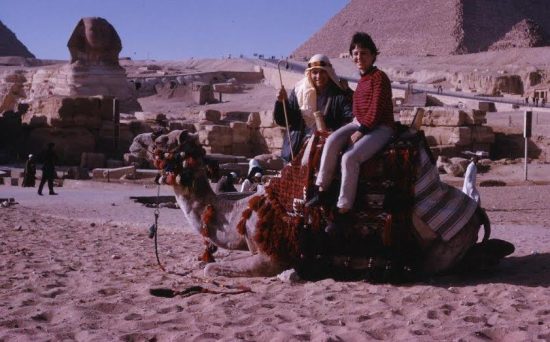 Engaged in their own experiments, Carolyn and Arne would take acid and walk down to the shore to study tide pools. It was Carolyn who suggested Arne try drawing the barnacles. His first paintings were tempera on paper, progressing to acrylic on board. These efforts had nothing to do with art theory. It was all part of a greater quest.

In the midst of their adventures–in 1970–the couple had a son, Erik. Arne and Carolyn parted a few years later, with Carolyn conceding that her father’s predictions were correct. Yet she remains the biggest supporter of a man who was a bit of a letdown as a husband and a father.

“Arne had a great loving personality and also a solitary side that became more apparent as the years went by,” Carolyn says. “He contacted his family only occasionally, allowing  a decade or more to pass between contacts. He often neglected his friends in the same way, making himself unavailable and hard to connect with.”

For 15 years Arne lived a hermetic life in a cabin in Sonoma County. The cabin had no heat and Arne would pass the short winter days with a blanket over his head, studying anthropology, Eastern mysticism, shamanism and astrology. 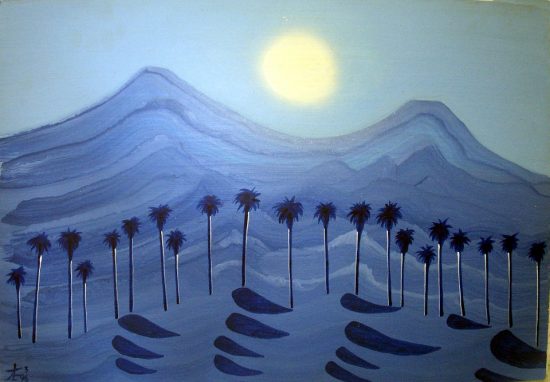 Of all the disciplines, astrology was his doorway into the expanded consciousness everyone craved in the psychedelic era. This was not the astrology of advice columns, but a deeper study of a very old science: the influence of stars and planets on human life.

Arne was known to carry an ephemeris (a book for calculating planetary positions) under his arm at all times. His work influenced Stanislav Grof and Richard Tarnas, both mythic figures in the world of consciousness studies. At Esalen, Arne exchanged ideas with people like Alan Watts, Joseph Campbell, R.D. Laing and Aldous Huxley. He was a full member of this fraternity of thinkers.

In later years, as their lives diverged, Carolyn had little contact with her former husband. She had a new family and was living in Northern California, working as a yoga teacher, an anthropology instructor and a glass artist.

Arne, increasingly solitary, had developed a troublesome cough and first went to Santa Fe for respite, then landed in Palm Springs–a place of refuge for so many “lungers” (people with lung ailments) over the years.

One of the few people who visited Arne during his last years in Palm Springs was Mark Linthicum, now a post-production supervisor in the film industry. They met when both had worked at a winery in Northern California. Though he was much younger, Mark was drawn to Arne–as so many were. “He was the wise man on the hill,” says Mark. “He was the smartest person I ever met.” 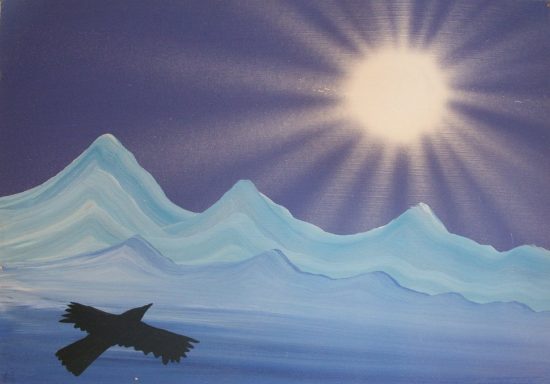 As Mark remembers: “He loved the palm trees. He just loved Palm Springs and he called it paradise. You can feel the heat of the Palm Springs sun in his paintings.”

As Arne neared the end, he was feverishly painting desert scenes inhabited with Egyptian goddesses and black ravens winging toward the light. “He was really preparing,” says Carolyn, who now divides her time between Palm Desert and Lodi.

Finally, for two nights in a row in 1999, Carolyn was unsettled by vivid dreams–her connection to Arne still intact over the decades. She got a call from Arne’s father saying he had died. Would she go collect his paintings?

Like the work of the contemporary Palm Springs painter Snake Jagger, Arne could be called a desert surrealist. His is a tidied-up version of the natural world. Dunes march and palm trees line up in an orderly way. In part, Arne was returning to the science fiction he loved as a child. The desert was a stand-in for perfect worlds on distant planets.

If you look at his life in one way, Carolyn says, he was a failure. He never made much money and he abandoned friends and family along the way. By a different measure, she says: “His interior world of mind and imagination was luminous.” 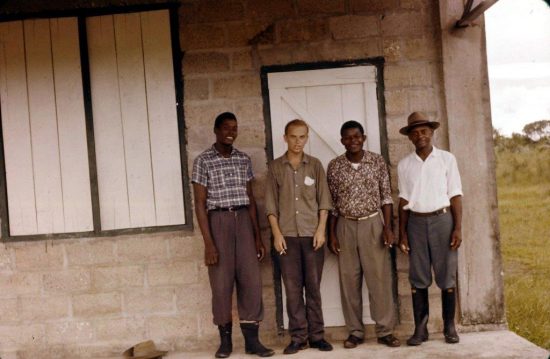 Arne broke through many people’s incredulity to make them believers in star charts and transits. As for desert art, he shares something with the greats.

Think of Agnes Pelton and her mystical mountains or Carl Bray and his glowing smoke trees. Arne took the landscape we all share and made it uniquely his own–a cosmology of raven, palm, dune and moon.