Up on Miracle Hill in Desert Hot Springs, the pueblo-builder and snake-tender Cabot Yerxa took painting lessons from his neighbor, Burt Procter, while Procter’s young daughter Ginny played on a packed dirt floor, sprinkled down with water to keep it cool. 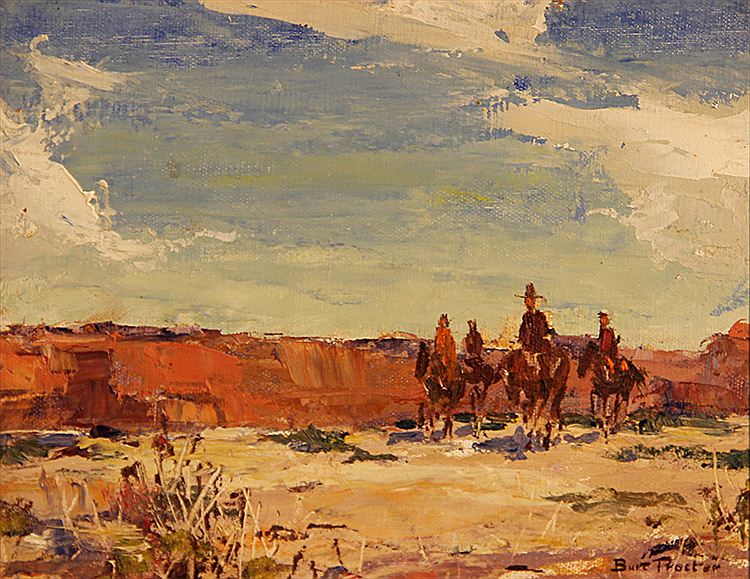 Procter had purchased land from Cabot and planned to build a cabin next door to the Pueblo, now a tourist attraction. He would be the first settler in Cabot’s dreamed-of arts colony. While the colony never materialized, Ginny and her parents often drove out from Corona del Mar in the early 1950s to camp on their land and visit the Cabots. One time they even went out at night with Cabot and his wife Portia to track UFOs.

Though she was too young to know it at the time, Ginny was witnessing one of the most poetic partnerships of the Smoketree School: The pueblo builder and the cowboy modernist. While Cabot is better known as an all-around desert character he also studied art in Paris and was a committed painter of Indians, Eskimos and palm trees.  He and Procter forged a friendship during many hours of walking in the desert, hunting for dinosaur bones and talking about art. 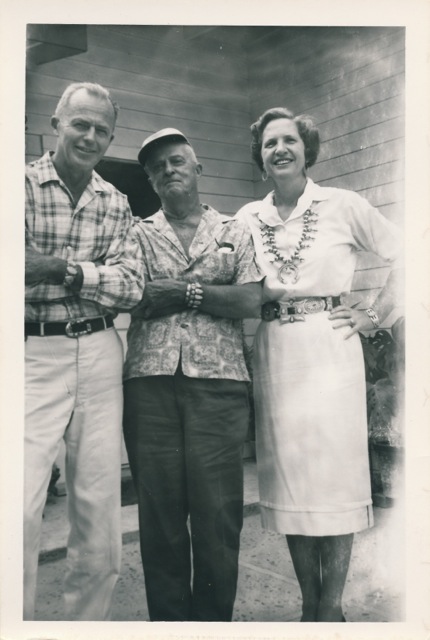 We’ll explore Cabot’s paintings in a forthcoming article. Here the focus is on Procter, a name that haunts the margins of desert art. He has his own chapter in the 1960 classic Painters of the Desert, and desert art collectors admire his work. Yet no one I’ve talked to seems to know much about him. He was no showman like John Hilton and no dandy like Jimmy Swinnerton, so he never developed a pop-star fan base.

I’d given up on finding out more until a friend introduced me to Procter’s daughter Ginny Bohannan, a ceramic and textile artist living on Orcas Island in Washington. Now thanks to Ginny we have the priceless photos you see here as well as more of her father’s story.

In the world of California and desert artists, Procter’s paintings stand out. The bold strokes are loose and modern while the subject matter (cowboys and buttes) is squarely traditional.  “My father was very much a cowboy at heart,” Ginny says.

Cowboy or Western art has often been disparaged but it was once a major part of the desert scene–and it remains popular in places like Jackson Hole, Santa Fe and Scottsdale. For those still on the fence about the genre, the modern-leaning Procter is a good place to start. 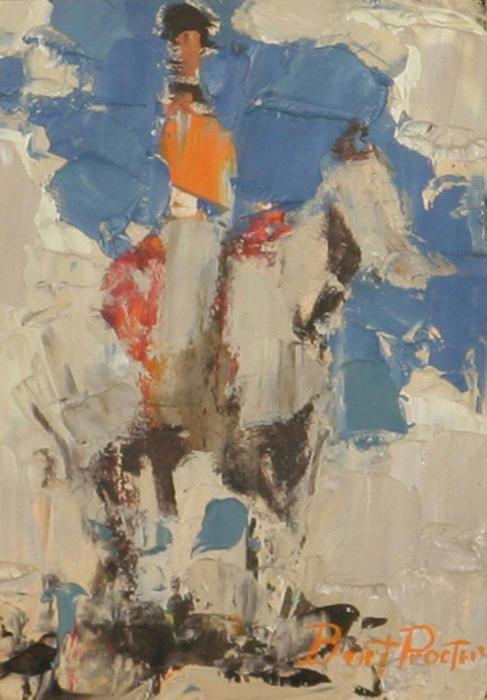 Born in 1901 in Gloucester, Massachusetts, Procter had an innate connection to horses. He started drawing stick ponies in the margins of Shakespeare by age four.  As a young man he studied mining engineering at Stanford University and went to work as a mining engineer at the Grand Canyon. Later he worked in advertising in New York, studying with “golden age” illustrators Harvey Dunn and Pruett Carter.

Migrating to LA in the 1930s, Procter studied at the Chouinard and Otis Art Institutes and then entered a five-year period of seclusion, working out his painterly destiny all alone. When he emerged, he went on to create one of the most unique styles in Western art. For clues to this later style (he specialized in coastal scenes and Navajo Indians along with the Palm Springs desert), gallery owner Robert Nelson says you have to look to Nicolai Fechin, also once a Palm Springs resident.

The owner of Manitou Galleries in Cheyenne and Santa Fe, Nelson calls Procter’s style “patterned art”. “His art is very Fechin-like,” he says. “That’s what sets him apart from all the California artists. It’s like he takes a two-inch palette knife and makes streaks of color, the way Fechin or John Franklin paints.”

A fan and collector of the cowboy modernist, Nelson purchased many of Procter’s paintings as well as his studio set-up after the artist’s death. The reassembled studio is on display at Nelson’s Museum of the West in Cheyenne, Wyoming.

Burt Procter’s former studio at Nelson Museum of the West in Cheyenne. Photo by Jim Steinhart of www.TravelPhotoBase.com.

Burt and Katherine Procter were married in 1936 and for a few years rented a small stone house in Araby from Christina Lillian. A patron of desert artists, Lillian remains a mysterious figure in local art history. She also owned the retreat in Cathedral City, Svenska, where Sam Hyde Harris stayed and painted.

“My parents loved the stone house and had a pet desert tortoise that lived in the front yard,” says Ginny. In his free time Procter went out hunting lost mines. The tortoise and the lost mines branded him as an authentic desert rat—undoubtedly one of the reasons he and Cabot Yerxa became such good friends. As Cabot once said of his fellow desert rats: “We rejoiced in being free men in a new, clean world.” 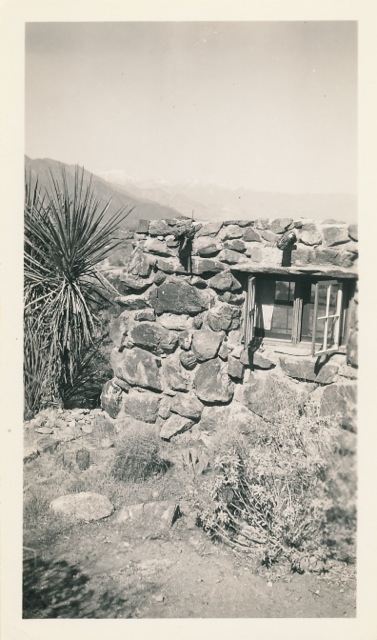 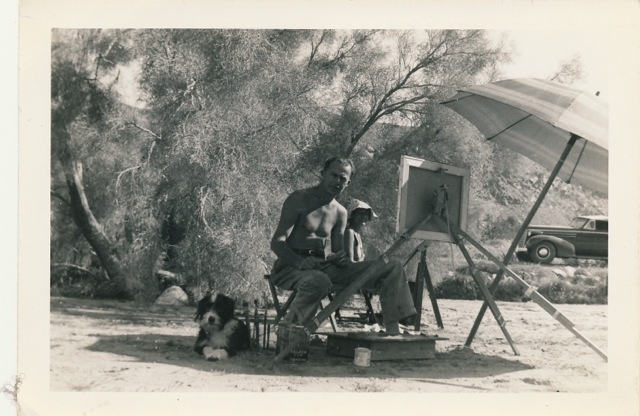 Procter and his dog Patches under a smoke tree.

The family’s main home was in Corona del Mar. Ginny grew up riding horses with her father along the three-mile stretch of beach at Crystal Cove. She started visiting Cabot’s when she was still in grade school in the 1950s. Cabot had begun work on the pueblo–with its 65 doors and 150 windows–in 1941.

Ginny and her best friend Shelley, the daughter of California watercolorist Rex Brandt, would wander out on the desert and return with pioneer artifacts, some still on display at Cabot’s. (The Brandts and Procters were neighbors in Corona del Mar.)

The Procter and Cabot families would go off to Navajo land, all of them draped in turquoise. Cabot was a wonderful traveling companion for a child, she says: “He was really sweet to me.” 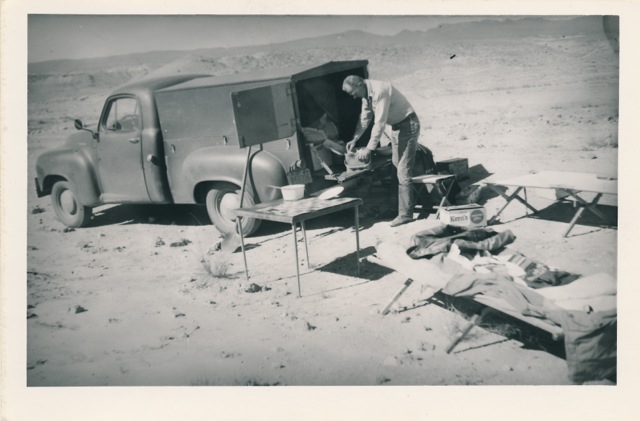 Burt Procter on a camping trip. The truck is Cabot’s. 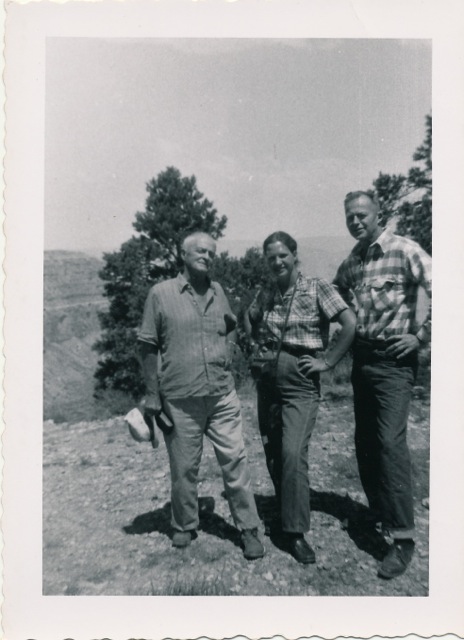 Cabot Yerxa, Katherine and Burt Procter at the Grand Canyon.

Back at Miracle Hill and her childhood perch on the packed dirt floor, Ginny had a boxseat view of the greats of the Smoketree School. “Brownell McGrew used to sit on the floor and play jacks with me,” Ginny says.  Nicolai Fechin was a family friend who sent Christmas cards every year.

Although Ginny doesn’t recall meeting him, another frequent guest at Cabot’s was the early Palm Springs artist Carl Eytel. Cabot first came to the desert in 1913 and met Carl Eytel in 1914. Ginny might have overlooked Eytel because he was small and quiet. Yet this melancholy man was the model for every nomadic nature boy (or girl) artist who came later. 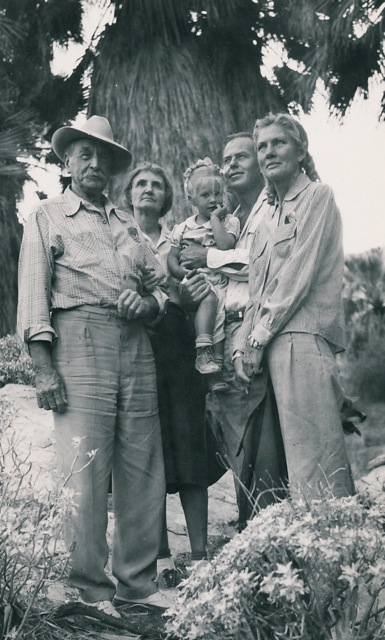 ***Correction. Peggy Pourtemour of Cabot’s museum pointed out that Carl Eytel died in 1925. While he visited Cabot he likely did not meet Procter.  The writer had artistic icon confusion.

Ginny remembers Cabot’s wife Portia Graham as “very girly, very fussy.” She didn’t appreciate the lack of plumbing in the pueblo. And Cabot—who died in 1965–may not have fully appreciated Portia’s devotion to the occult. Ginny remembers “a lot of eye rolling” when she wasn’t around. “I do remember my parents explaining to me about how everyone has different opinions and views of life and that we were not to dispute Portia’s beliefs even if we did not agree about the UFO thing.”

In 1968 the Procters settled full-time at 1037 Via Altamira in Palm Springs. Near the end of his life Procter began teaching Bill Bender his technique so he could pass it on to others. “We were the best of friends and judged many shows together,” says Bender, who now lives in Victorville. Procter died shortly after the lessons began. Bender, an accomplished cowboy painter in his own right, never did adopt the Procter style, a style that remains Procter’s own. 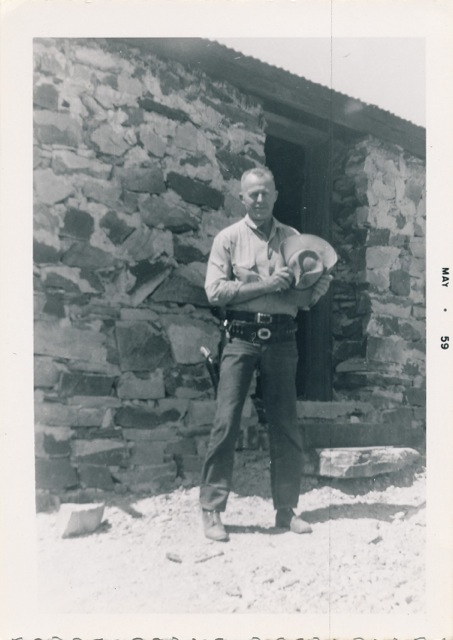 Burt Procter at the stone house, forever a cowboy.

“He was an amazing father and a very gentle man,” Ginny says. “I have always felt he never received his proper place in the art world. He was a private person and he didn’t play the politics or go to the parties or do what he might have done to promote his work. That was his choice.”

Always a cowboy at heart, Burt Procter also remained a student of composition and color all his life. Just before his death, in 1980, in Palm Springs, he said to Ginny: “If I live long enough someday I’ll get it right.” 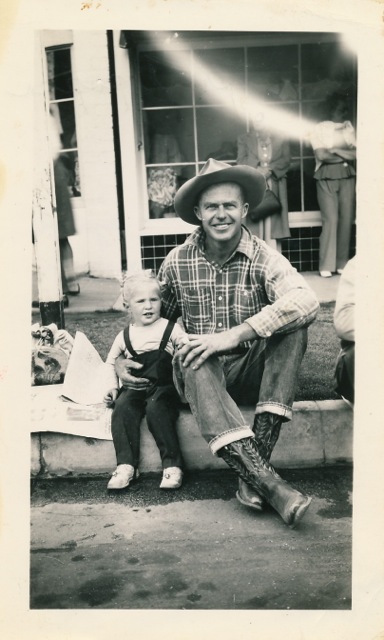 Burt Procter and Ginny at a Palm Springs parade.

← Q&A with Greg Frux: How to Be an Expedition Artist
Burt Procter Painting Demo Surfaces →

18 comments for “Burt Procter: A Cowboy Modernist on Miracle Hill”