Lora Woodhead Steere was only a baby in 1890 when she first rode a wagon into Strawberry Valley in the San Jacinto mountains. In 1946 she met Max Krone, who was founding a new school in Idyllwild, and Steere went on to teach the very first class at the Idyllwild School of Music and the Arts (now the Idyllwild Arts Academy). Steere taught for 16 years at the influential academy without ever accepting a paycheck. 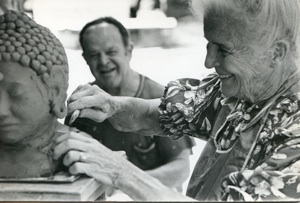 Steere was an acclaimed sculptor and also a paleontologist and naturalist. (A background in natural sciences seems to be a plus for any artist.) Steere’s devotion to the local mountains centered on Tahquitz Peak. A former student, Evan Mills, says the peak was her cathedral, in much the way Mount San Jacinto served as artist Agnes Pelton’s shrine.

Steere made more than 50 trips to the peak in her lifetime. Friends carried her on her last visit the year before her death in 1984. She died at age 96 in Idyllwild.

Learn more about this inspiring local artist and arts mentor at the Lora Woodhead Steere Retrospective. The exhibit runs from August 7th to September 3rd, 2010, at the Krone Museum on the Idyllwild Arts campus. The opening celebration is August 7th, from 11-12:30 at the Rustic Theater in Idyllwild. 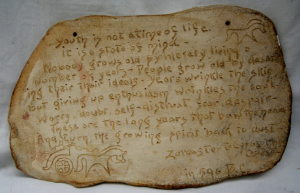 More from the Press Release:

Retrospective of the Art and Love of Life of Lora Woodhead Steere (1888-1984) Opens on August 7 in Idyllwild, Celebrating the 60th Anniversary of ISOMATA

IDYLLWILD, CA (July 6, 2010) – – A retrospective devoted to the art and the love of life of Lora Woodhead Steere (1888-1984), the legendary artist, naturalist, Idyllwild pioneer, and beloved first teacher at the famous Idyllwild School of Music and the Arts (ISOMATA), now called Idyllwild Arts, will open with a special event at 11am on Saturday, August 7th, at The Rustic Theatre. The exhibit opening and reception will follow at 1pm the Krone Museum on the Idyllwild Arts Campus. The event and exhibit is sponsored by Idyllwild Arts, Idyllwild Area Historical Society, and the Steere Family is free and open to the public.

KEYNOTE: DR EVAN MILLS, as a child was mentored by Lora W. Steere, making local headlines when he at 8 made his first trek to Tahquitz Peak along with Lora at 80 years-old making her 56th trip. Mills grew up to be one of a group of scientists whose research and writing helped earn the 2007 Nobel Peace Prize for the UN Intergovernmental Panel on Climate Change.

BOB KRONE, son of Max Krone, founder of ISOMATA and photographer on the film “The Ballad of Idyllwild” featuring Lora W. Steere. Helped build Campus 1947 to 1951. Member of Idyllwild Arts Board since 1967. Provost, Kepler Space University. a global educator, author, and consultant in Advanced Management theory and practice.

ROBERT B. SMITH, author of the acclaimed “Idyllwild and the High San Jacintos,” and board member of the award-winning Idyllwild Area Historical Society.

The GOLDEN GROTTO GROUP with Bruce Ryan, Buzz Holmes, Kent Weishaus, Amy Fogerson and surprise guests. All members of the group have long and special connections with ISOMATA, some spanning generations.

THE EXHIBIT will include a selection of Steere’s prized sculptures, Illustrations, archival photos, film, and letters from the collections of the Krone Museum, the Steere family, and other local patrons. Special highlights: A life-sized statue commissioned by Helms Bakery for the 1932 Olympics on loan from the LA84 Foundation and a collection of scientific illustrations and letters housed at the Smithsonian Institute.

BACKGROUND: Lora Woodhead Steere’s (1888-1984) parents first brought her to Idyllwild in the San Jacinto Mountains in an old camp wagon in 1890, when she was just two years old. Loving the outdoors she grew-up to study and receive advanced degrees in zoology and paleontology, although she won fame as an accomplished sculptor including a commission by Helms Bakery for a series of sculptures to commemorate the 1932 Olympics.

She returned to Idyllwild, taught the first class and donated the funds for the very first building at the famous Idyllwild School of Music and the Arts (ISOMATA), now known as Idyllwild Arts. Her colleagues included the most revered artists of the day, photographers Ansel Adams and Alfred Eisenstaedt; “Music Man” composer, Meredith Willson; folksingers Pete Seeger and Marais & Miranda, choreographers Bella Lewitzky and Merce Cunningham; potters Maria Martinez and Susan Peterson; and writer Norman Corwin. Lora taught sculpture for 16 years at the Lora Steere Sculpture Studio on campus. At the 2nd Annual Black tie dinner of the Associates of ISOMATA in 1971, Willson presented Lora with a plaque for her “devotion to art and love of life which has been an inspiration to all who have been privileged to know her.” Lora was equally famous for her community potluck dinners and more than 56 treks to Tahquitz Peak in Idyllwild until late in life. She died at 96-years-old in Idyllwild.