Hours before daylight, Elaine Mathews wakes up thinking of a palm tree or piece of sky she wants to work on. “I want to get started and I don’t want to wait,” she says. So while her husband, Steve, sleeps, she sneaks off to the garage studio she shares with a golf cart, a Honda, a leaf blower and other garden tools. 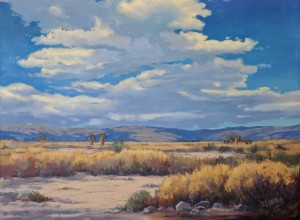 She sets a timer, then for the next few hours she paints tirelessly, occasionally spritzing herself with a water bottle (the wall A-C unit can’t keep up with the 115 degree temps.) When the timer rings she might tear herself away to pay bills or eat lunch. “I have to force myself to stop,” she says.

Mathews paints large semi-Impressionistic landscapes inspired by the work of early painters William Wendt and Benjamin Brown. Hers is the perennial story: The right kind of person meets the desert landscape and another Smoketree artist is born. 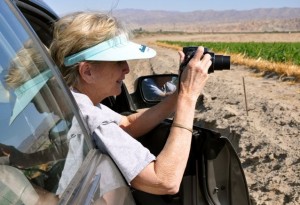 Elaine Mathews on a scouting trip. Photo by Christy Porter.

Fortunately, though, nothing about Mathews other than her work says artiste. She lives not in a garret but in an upscale Country Club. She’s a grandmother and former schoolteacher; the backseat of her Honda is full of crumbs and kids’ toys. Most days she wears whatever is comfortable to paint in. “I always get the prize for having the most paint on me,” she says. She’s not someone who talks about tones and values all the time, but if you drive around with her you can say with certainty: “She is not seeing what I’m seeing; she’s seeing a lot more.”

Mathews showed signs of incipient artistic obsession ever since she was a child growing up in Compton, copying the illustrations from “Hiawatha” and discovering the rocks and hills on family car trips to the San Gabriel Mountains. She went on to major in art at California State University, Long Beach, later earning an MA from Azusa Pacific University. There was little encouragement for traditional landscape painting while she was in school, she says: “It was all abstract and avant garde.” 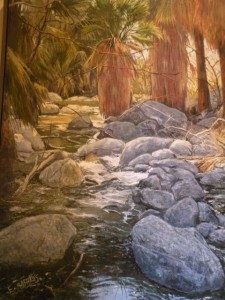 She taught art in the Anaheim public high schools and always painted on her time off. Living in Buena Park she often worked in her garage studio in the middle of the night with a pistol propped on her easel. “It wasn’t loaded. It was just in case I got a surprise visitor.” Over the years, Mathews mastered all the “California Classic” themes—Laguna Beach, the Sierras, Big Sur.

But then five years ago she and Steve moved to a golf course in the desert. It had been raining for days when they arrived. Clouds were bunching in and out of the San Gorgonio pass. When the rain let up Mathews started painting and has not stopped since.

“Living on the coast you’re always looking through a filter,” she says. “You come here and it’s like getting a new prescription for your glasses. It’s like moving to a new planet.” 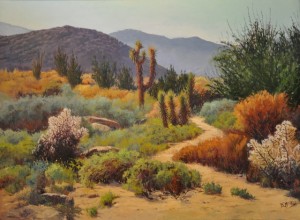 She visited the historic Desert Art Center in Palm Springs, looking for friends to paint with. There she met Louise Tennyson (who recently passed away), a welcoming guide who had painted with an earlier generation of Smoketree painters such as Karl Albert and Darwin Duncan. Tennyson and another painter, Eunice Sause, showed Mathews the Indian Canyons, Box Canyon, Araby, Eisenhower Trail, and Whitewater.

“I just immediately fell in love with it all,” she says. “The sun, the vastness, the loneliness. There’s just no place like this for being able to see so far.” Mathews had painted more in the studio than outdoors, but that changed once she met the desert. Soon she was even leading the Paint-Outs, monthly open-air painting excursions, for the Desert Art Center. (See Latest News for the schedule.)

She also began painting bigger and bigger canvases as large as 3 feet by 4 feet. “I don’t know how you capture this vastness in a little 6”x8” painting,” she says. She creates giant, palpable expanses of rocks and earth, with tough dead-looking plants waiting to come to life with moisture. 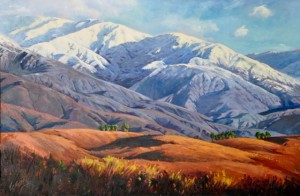 Mixing color, she believes, comes innately to her; it’s something she’s always known. Drawing isn’t as effortless so she carries a sketch pad; she’s been practicing on family trips to Big Sur for 40 years.  “I paint because I just feel we have been given such a beautiful, delicate, violent, rugged, colorful world and I marvel at it all.”

When she thinks a painting is finished she puts it in the living room next to the TV and keeps an eye on it for two weeks, looking for fixes. Meanwhile, in a corner of the garage opposite her easel, her husband Steve builds her frames and also works at his own sculpture.

She likes to sell paintings one-to-one to people she comes to know. When painting at the McCallum Pond at the Coachella Valley Preserve recently, she sold a painting to a couple who’d been coming there for 20 years to sit together on their secret bench. “They were happy they would now be able to visit the pond from their living room wall,” Mathews says. “Meeting people like this, hearing their stories is so rewarding.” 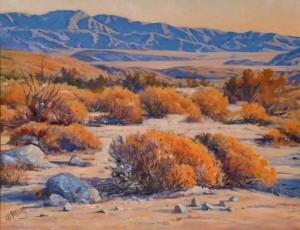 Another one of Mathews’ fans, Christy Porter, is a Palm Springs resident who has purchased seven of Mathew’s desert paintings. “Elaine is a rock master,” Porter says. “I can just feel the heat coming off the rocks she paints.”

“When I wake up I look right into a path painted by Elaine, and it’s just like I’m looking out the window into a rocky arroyo,” she adds. “Her paintings are windows on the desert.” 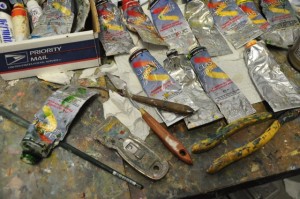 5 comments for “Elaine Mathews: Master of Rock and Earth”