March 7, 2019–When I last wrote about Desert X it was to warn you that the art carnival might be coming for your mountain. Little did I know they were coming for mine–the inviolate north face of Mt. San Jacinto. 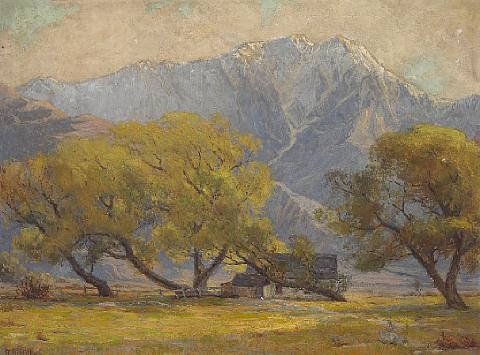 In the years I’ve lived in Palm Springs, the mountain has taken on totemic importance in my life, as it has for many others. Raymond Chandler called the peak “San Jack” in Farewell My Lovely, so I took to calling the mountain Jack after my father (named Jack) died. I’ve talked to the old mountain often in times of trouble.

For early and contemporary landscape painters in the Coachella Valley, this 10,834 foot granite face is as important as Taos Mountain was to the Taos Moderns. The view from Snow Creek, especially, has given shape to an entire body of landscape art. Artists even return here when they die. Agnes Pelton’s ashes are scattered on the mountain, as are the ashes of the Idyllwild painter Steve Hudson.

But now when I take a walk at Jack’s feet I’m confronted with an RV-sized orange cube surrounded by vehicle tracks and the footprints of thousands of Desert X tourists. No offense to Sterling Ruby or his Specter creation, but plopping a day-glo box in front of San Jacinto is like installing a kiddies’ bounce house in front of Half Dome–and inviting 200,000 kids over to play. 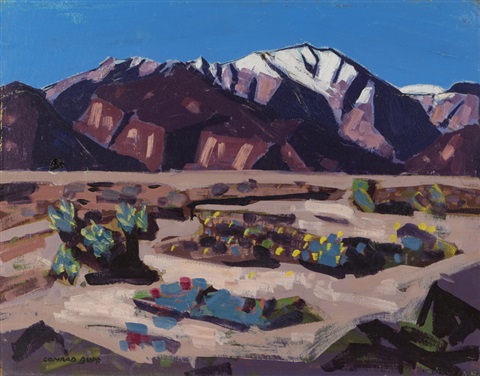 The site is part of our local Multiple Species Habitat Conservation area. The Coachella Valley Mountains Conservancy and Friends of the Desert Mountains have worked to purchase and protect large tracts here. They could not protect Jack from Desert X, however. The art biennial–a site-specific free-for-all funded by the Coachella Music and Arts Festival and other donors–arrived at the perfect time to exploit the landscape.

The old guard environmentalists are aging. A tireless defender, Jeff Morgan of the Sierra Club, died not long ago. Meanwhile, our local newspaper has been decimated by layoffs and budget cuts. In one of those Faustian bargains newspapers make to survive nowadays, the Desert Sun is an official “media partner” with Desert X. It’s hard to be an environmental watchdog when your name is on the swag bags. 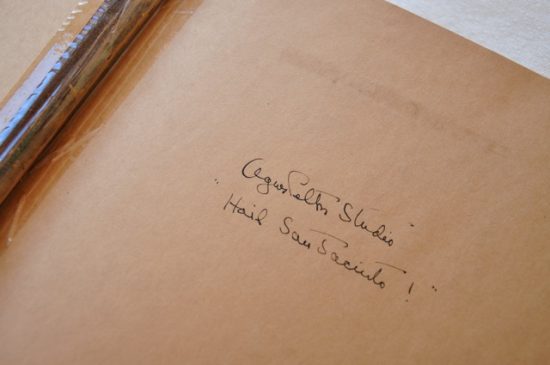 In a complicated twist, a Riverside County planning commissioner, Bill Sanchez–he also works as a builder in Rancho Mirage–actually constructed some of the Desert X exhibits. After four exhibits, including Snow Creek, were already installed and open to the public, Sanchez then secured a handshake OK with Riverside County. By this agreement, no permits are needed at Snow Creek and the other sites because fewer than 200 people visit at a time. Yet–judging by 2017 attendance numbers–more than 200,000 people will trample Jack’s flanks before the event closes.

The damage won’t end there. The orange cube has been Instagrammed and geotagged (GPS coordinates added to the image) thousands of times by visitors; Snow Creek road will remain a popular stop long after the cube is towed away.

To answer critics, Desert X executive director Jenny Gil frequently recites the Leave No Trace mantra, as if the words will resuscitate endangered fringe-toed lizards who have been mowed down by tourists from Encino. It’s too late to Leave No Trace. Desert Xers have already torn up the flanks of Jack, leaving vehicle scars that will take decades to heal. 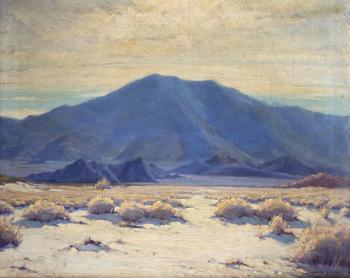 So what is the antidote to this disrespect? Desert painters, for one thing. As Thoreau noted long ago, only direct contact makes a person want to protect a place. An Instagram stop just doesn’t cut it. As Thoreau said, what we want is: “The solid earth! The actual world….Contact! Contact!”

The people most deeply in touch with Jack have been the Cahuilla Indians, mountain climbers and desert painters. I once listened in awe as the late Alvino Siva told me how Cahuilla shaman Pedro Chino transported himself beneath San Jacinto on an invisible waterway. Legendary hikers and climbers–Royal Robbins, Norman Clyde–became intimate with the granite itself.

Agnes Pelton kept an eye on Jack from her back porch in Cathedral City. So central was the mountain to her life that she wrote “Hail San Jacinto!” in her studio guest book. A contemporary desert painter, Elaine Mathews, similarly shows her devotion by greeting the peak in the morning: “Hey Big Boy.”

The damage caused to Elaine’s Big Boy by several hundred thousand Instagram tourists is no small matter. Yet I know Jack ultimately will prevail. Desert Hot Springs pueblo builder and homesteader-artist Cabot Yerxa knew this too, even though Desert X hadn’t been invented when he was alive. “Old San Jacinto Mountain cuts all men down to a reasonable size,” he said. “You can shout at San Jacinto, or swear at it…but there is no response. It cannot be threatened by force or impressed by money or reputation.”

Cabot seems to be speaking directly to Desert X directors Jenny Gil and Neville Wakefield. While newspapers falter, environmentalists age and agencies shuffle blame, the mountain retains its ancient authority. Before you dart off to the next pop-up Instagram art party, Jenny and Neville–look up and listen. 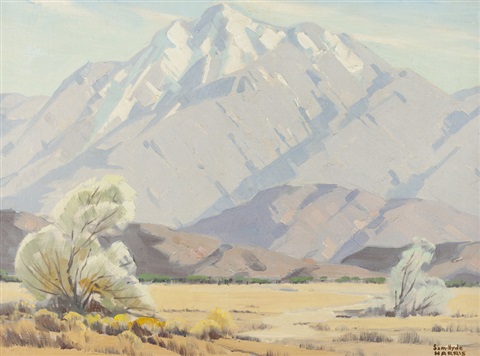