Despite its current popularity with fashion photographers, Wonder Valley can feel godforsaken on a hot summer day. It was just such a day when Joe Barrett huddled beneath a shade canopy and sent his drone into the sky to take photos of an abandoned five-acre homestead. 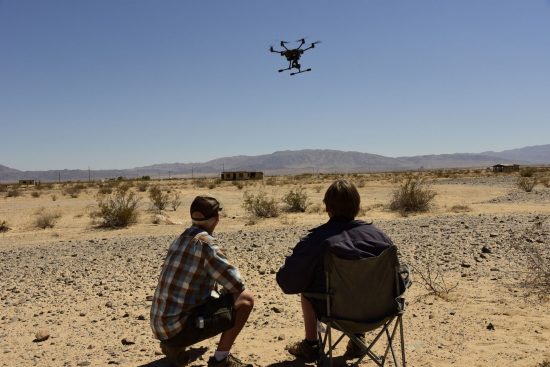 The original shack was busted up; no one had lived there for decades. But a neighbor had noticed–while browsing Google Earth–that there appeared to be rows of stones arranged to form words. Big words.

They were hard to make out from the ground so Barrett and his drone were enlisted to see what was there. As an image came into view on his small screen, he saw what looked like a huge mushroom etched with letters. “I could see it was something awesome,” Barrett said.

Barrett had been needing something awesome. A veteran of the film industry in LA, he’d been diagnosed with a rare neurological disease, Transverse myelitis,  and had temporarily lost almost all his mobility. Like so many before him, he retreated to the desert to recover. Living in Yucca Valley, he’d taken up drone photography.

His recovery was about to get a big assist from a homesteader named Hazel who died in 2012. Once the drone came back to earth, Barrett drove home in a state of anticipation. As he photo-shopped the images, what emerged was the secret garden of Hazel Iona Stiles (1913-2012), a hitherto unknown piece of land art. At 300 feet by 180 feet, it covers a bigger footprint than Salvation Mountain (Leonard Knight’s popular creation near Niland) with a similar flavor of visionary folk art. 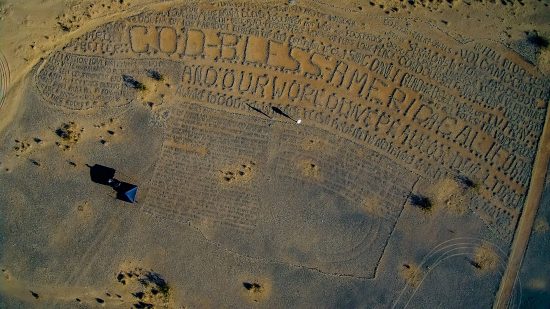 “Holy Cow, look at this!” Barrett said to himself. (You can see the results of the charmed drone flight in a photography display at the Wonder Valley Community Center in August, 2018.)

None of the neighbors knew the extent of the work as it’s almost invisible from the ground. Neighbor Jim Wheeler used to see Hazel working around her homestead alone, never with any visitors. She dressed “like a desert rat” swathed in a big hat and bandanas. “I thought she was just out decorating the yard,” he said. “I don’t think anybody ever knew anything about this.”

Even Hazel’s son, Jack Stiles, did not know what his mother was up to. When shown a photo of the artwork for the first time, the Castro Valley resident seemed bemused and said his mother was always one for hard work in the garden.

Hazel was gardening, but on a celestial, or possibly intergalactic, scale. She was born in Brownsville, Texas and later lived in Los Angeles, where she worked as a conductor on streetcars and then as a Rosie the Riveter in an aircraft factory during the war. She had three sons, Jack, Edward and Robert. Only Jack survives her today.

She moved out to remote Wonder Valley in the 1960s after a divorce. In a photo taken around that time, she appears confident and somewhat playful despite the fact that home was a primitive cabin with no electricity and no water. “It was not livable, really,” says Jack Stiles, who visited before the rock garden was in full bloom.

Hazel was a student of Christian Science–a metaphysical movement that reached its peak of popularity at the time she was a young woman in the 1930s. She tried her hand writing on spiritual themes. “She did a lot of writing but I don’t think it went anywhere,” says Jack. The shift to writing in rocks may have been just another way to get her message out.

Hazel began sorting and stacking piles of rocks around her property. Some of the rocks appear to be lava imported from the Amboy Crater. She spray painted some rocks and painted dots on others, starting work on her stone garden in the early 1980s–the same time Leonard Knight was busy building his mountain near Niland. 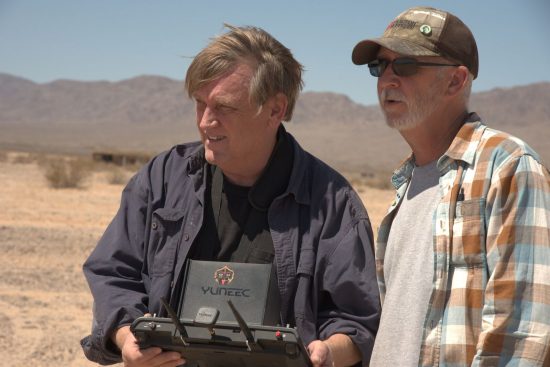 Ken Sitz–the man who discovered the work via Google Earth–observed that Hazel’s work resembles a giant Dr. Bronner’s bottle. Beneath the large letters are what appears to be smaller text, but the words are unreadable, perhaps erased by wind or floods. Sitz, who calls the creation Volcanic Gardens, speculates there may even be a secret code embedded in the small dots.

Hazel must have made thousands of trips over many years–choosing stones and pacing back and forth under the brutal sun–to spell out the riot of messages that run together in one jubilant rush. This is not the work of a morose hermit but an ecstatic messenger telling us to Sing Dance Pray and Turn off TV.

Placing stones one by one, she spelled lines from Shakespeare’s As You Like It, taking excerpts from a passage that reads:

Sweet are the uses of adversity,

Wears yet a precious jewel in his head;

And this our life, exempt from public haunt,

Finds tongues in trees, books in the running brooks,

Sermons in stone, and good in every thing.

The verse is a clue to Hazel’s philosophy: Nature offers all the wisdom we need, and there are secrets in the Wonder Valley stones if you take time to look. Peace and love are big themes for her, as well: Seek Peace Pursue Peace Work for Peace. Jack Stiles says his mother was always asking: “Why can’t we all live together peacefully? Everybody’s looking for the perfect world so why do bad things go on?”

A mystery: Who was Hazel Stiles addressing with her words? The letters are so large that the manifesto can only be seen from the air. The shack is on a major flyway into LA. In her isolation–and given her background building airplanes–Hazel may have been watching the contrails and fashioning messages for air traffic. Or, given the UFO culture in the Hi Desert, it’s possible she had a outer space audience in mind–though there is no evidence of that so far. 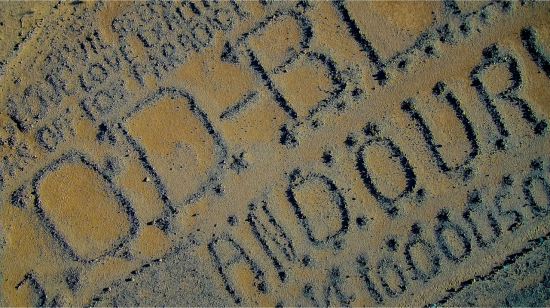 When asked who she might have been talking to, her son said: “Sounds like she was talking to the world.”

Another puzzle for her fans: How did Hazel map out her work on such a large scale that it could only be seen from space? As Joe Barrett  says: “Some would say she was divinely guided.”

The site has been protected until now by its ground-level invisibility and remote location. The fading of the original paint adds to the protective coloration. “The only reason it’s still there is because nobody saw it,” says Barrett.

But the moment the drone revealed the splendor of Hazel’s Garden, it was at risk. It’s an extremely fragile environment. Off-roaders have already left their tracks. One misplaced footfall can disrupt a quote from Shakespeare. The carefully-placed rocks are portable and at risk of being carted off by selfie-tourists.

The task of preserving Hazel’s Garden now falls on the somewhat reluctant shoulders of Ken Sitz, a recent Wonder Valley transplant from LA. “I don’t really want the responsibility but it’s too late now,” he says. “Something has to be done.”

“Ideally we can avoid it becoming another Hi Desert novelty and have it reflect and benefit in some way the Wonder Valley community–which is fairly poor and hard scrabble but filled with a unique blend of long-term residents and relatively newer creative types,” he adds. He’s assembled an informal preservation group to do further research and protect the artwork, which is on private land.

Whatever happens next, for those who were at the unveiling it was a life enhancing moment. After seeing the drone images for the first time, Joe Barrett said: “I don’t think I came down for three or four days. I’m going to spend the rest of my life trying to duplicate the thrill of that day.” 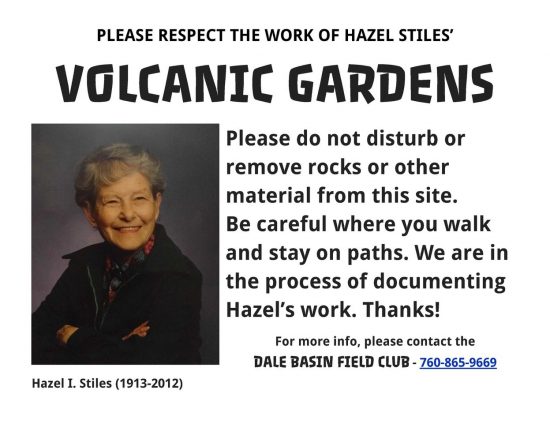