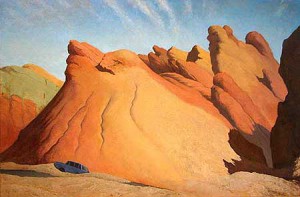 Long before the first art gallery opened on El Paseo, US Army expedition artists of the 1800s sketched the desert on foot. Baldwin Mollhausen braved wolves, grizzlies and snowstorms to make the earliest sketches of the Needles area. For survey artists like Mollhausen tramping through the sands was an essential part of painting a picture.

Today most landscape artists survey the terrain from a comfortable vehicle. However, some artists have returned to the original concept of art as a form of exploration, even risk-taking. The British artist Tony Foster, for instance, creates watercolor diaries of the world’s wild places while traveling by foot, raft and canoe. Santa Fe painter Peter Nisbett has explored the Grand Canyon for 20 years by foot, raft and paintbrush.

Two prominent desert artists in this small club of “adventure artists” are Janet Morgan and Gregory Frux.  From the unlikely homebase of Brooklyn, the couple has explored Antarctica, Bolivia, Glacier National Park and many wildernesses. But they return again and again to the California deserts, a place they know more intimately than many people who were born here. 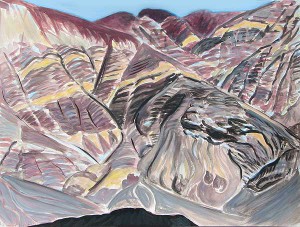 They have been artists-in-residence at Joshua Tree National Park, and completed three residencies at Death Valley National Park, as well as sojourning in the Mojave National Preserve and at the Salton Sea. What it takes to be a modern day explorer-artist, they say, is: “A willingness to be uncomfortable, nauseous, scared, confused, disoriented and otherwise put-out”.

Janet Morgan worked as an arts therapist with cancer patients before turning to art fulltime. Gregory Frux was trained as an architect. Both were imprinted with the desert early. Janet, who grew up in Michigan, went on family camping trips to Death Valley. As a young man, Greg went backpacking in the Four Corners region as part of a high school program. He was a wide-open teenager reading “Lord of the Rings” at the time (“The road goes ever on and on”) and the bare landscape left a permanent imprint.

The couple later celebrated their honeymoon on the Navajo reservation; Greg came to Joshua Tree as a rock climber. “He has a tactile understanding of rock,” Janet says. Before they began to paint the desert, they needed to develop a desert vocabulary, she says: “Rock strata, drifted sand, light on stone.”

In 2002, Greg returned again for an artist’s residency at the Lost Horse Ranger Station in Joshua Tree. The staff handed him the key to a remote cabin with no electricity and left him alone. “The first day in Joshua Tree I was freaking out—there’s nothing here to paint,” he says.

Late that day he became absorbed in an outcrop called Cyclops Rock and began to paint as the sun lit up the stone. Finally, he climbed by rope “into his painting” and was thereby initiated as a desert painter.

Climbing is a big part of Greg’s art. In an illustrated journal of the couple’s Death Valley trip (copies of their 2009 Death Valley Field Journal are for sale through their website: http://artandadventures.com/shop2.html) there is talk of ropes and pitches and belays. Along with the climber talk there is geology talk. Topping out on a pitch called Dark Shadows, Greg is surprised by “lovely layers of red, pink, yellow and pale sandstone.” 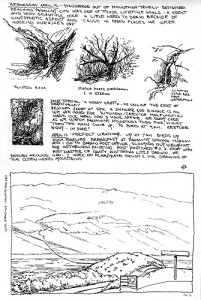 A page from Greg and Janet's Death Valley journal.

Adventure art involves getting physically close to the landscape rather than keeping it at windshield distance. On the Death Valley salt flats, 282 feet below sea level, Janet laid a thick tarp on the ground then stood on the 5×5 foot canvas itself and painted the 80-mile views: “Two mountain ranges, snow on top of Telescope peak, huge alluvial fans reaching toward me, red earth, green water, white salt, purple hills, bronze hills, blue sky,” she wrote. 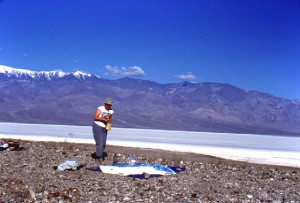 The two often paint side-by-side, but have different styles and different ways of working. “Sometimes I don’t want to see what she’s doing,” Greg says, “or I’ll ask permission to borrow a theme.” (Greg sometimes calls his companion “Morgan” in his diaries, as in: “Morgan painted three watercolors…lunch of cheese, oysters and bread…into Golden Canyon…battle blowing sand.”)

While some artists wait on the approval of critics, to Greg and Janet the highest compliments come from the Park biologists and rangers who really know the desert. When a Death Valley geologist praises a painting of a 1.6 billion year old rock formation, it’s better than a rave in ARTnews.

Among plans for the future, the couple wants to revisit Mojave National Preserve. Greg’s “Death Valley Tick List” includes climbing every peak in the park. Janet is working on finding a publisher for her inspired children’s book “Welcome to Death Valley.” 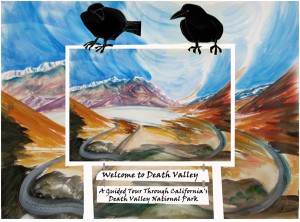 Adventuring in the desert is only a small part of what the artists do. Janet also paints goddesses, belly dancers and supreme beings; Greg paints Brooklyn street scenes and industrial landscapes.

For a taste of their very wide world, see their websites. Sales of Janet and Greg’s Death Valley Art Cards benefit Death Valley R.O.C.K.S., a program that brings LA schoolkids to Death Valley.