Editor’s note: In the early days of desert painting, Palm Springs was a tiny outpost in the wilderness and artists roamed the dunes like nomadic prophets. Among the top-tier artists here around 1920 were the three friends Guy Rose, Alson Clark and John Frost. In a sweeping new biography from the Irvine Museum, Phil Kovinick shares 12 years of research on one member of the trio. In this excerpt (West Again, 1919-1922), Frost is seeking relief from tuberculosis at Nellie Coffman’s Desert Inn and hanging out with a film crew shooting a Zane Grey movie. “Jack” is John Frost. Nimmie and Bo are his parents. Betty is the fated love interest. 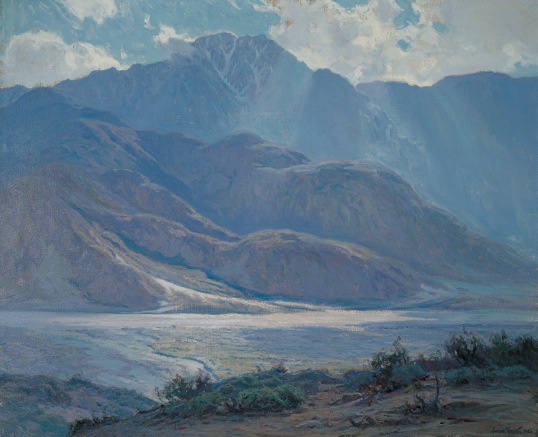 Jack kept in touch with his parents on a regular basis. Although his letters to them no longer exist, fortunately theirs to Jack through July 4, 1919, are extant. Through his correspondence and his sketchbooks from the trip, it is possible to trace his activities through a good part of the year.

Seeking a dry, moderate climate, Jack went first to Redlands, a city in San Bernardino County sixty-seven miles from Los Angeles. He apparently chose well, for the community possessed ideal, year-round weather for one with his illness.

In Redlands, Jack did as Nimmie implored him to do, “Rest, Rest, Rest.” Following the regime learned so well at the sanatorium in Davos-Platz, he spent most of his time relaxing and consuming wholesome meals, and he apparently limited his art activities to some sketching. As his health improved, he soon became restless with the monotony, a milieu that was relieved when Guy and Ethel Rose traveled from their Pasadena home to see him in mid-February. With the approval of his Redlands physician, Dr. Homer T. Joy, he was able to accompany them on a trip to nearby Palm Springs, his first visit to the desert community. Upon his return to Redlands, he began again to paint, and by month’s end he received the good news from the doctor that he was well enough to resume normal activities.

Eager to view more of California’s diverse scenery, Jack, with sketchbook in hand, visited San Diego County, spending a few days in Coronado. In March, after going back to Redlands, he went to Santa Barbara, followed by a return to San Diego County, this time making stops at Alpine and La Jolla. By the end of March, he had settled in Palm Springs, renting a bungalow at the famous Desert Inn, owned by Nellie Norton Coffman. Also staying at the inn was his ailing friend from New York, Warner Leeds, who was with his wife, Louise. 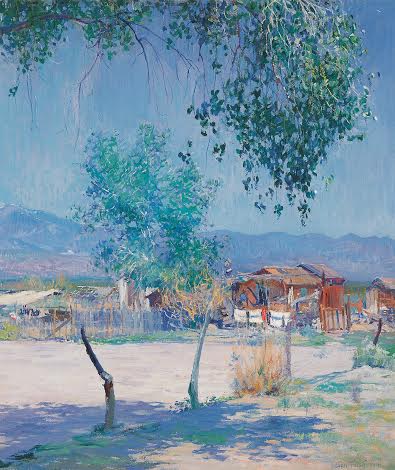 Jack had picked the right time to revisit the desert community of less than one hundred people: It was playing host to one of the many movie companies that used the area for productions in desert settings. Already being filmed were scenes for Desert Gold (1919), based on the novel by Zane Grey. Jack not only witnessed the making of a film for the first time but also got to know members of the cast, particularly Eileen Percy, a young ingénue from Northern Ireland who had been a Ziegfeld girl and had costarred opposite Douglas Fairbanks in a number of silent films. Shortly after the departure of the first film company, a second arrived to shoot scenes for another Grey classic, The Lone Star Ranger (1919), starring one of the most famous leading men of the era, William Farnum.

Again, Jack and the other people of Palm Springs were privy to first-class entertainment. As an added attraction, one of the cowboys in the film indicated to his friend “that he was thinking of bringing the young woman who became his bride down to the springs to get spliced.” At this point his friend and others in the cast took over and decided to make the arrangements for the ceremony. As reported in the Los Angeles Times:

A ramada in the back of the Los Palmas Hotel was transformed into an outdoor church, and the Rev. Dr. McLaren of the local Presbyterian Church performed the ceremony. 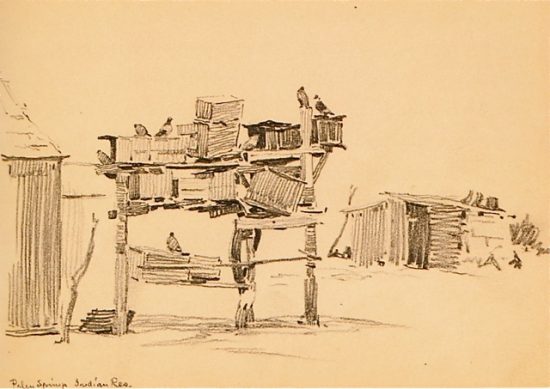 Guests at the wedding included all the villagers, the guests of the Desert Inn and the Indians from the Caliente Reservation, who, with the cowboys in their best chaps and brightest colored kerchiefs make a picturesque array.

Pistol shots from the weapons of the cowboys were the signals for the ceremony to commence, while at the end of the service the cowboys whooped it up and let go an enfilading fire of .33’s and .44’s.

Afterward, John Gordon Edwards, the film’s director, remarked, “Well-directed scene.” Farnum, who gave the blushing bride away, added, “I don’t think there will have to be a re-take.”

With summer fast approaching, the population of Palm Springs decreased dramatically, as Jack and others naturally sought out more moderate climates. By June 1, he was in Los Angeles, where he had rented a room at the Hollywood Hotel, in proximity to Betty and her mother. Showing concern that Jack would over-exert himself in helping Betty care for her ailing mother, Nimmie wrote, “Betty’s Mother knows that you are in California for your health, of course. It seems a little hard on Betty, but she is young and has plenty of time to wait, I suppose.” 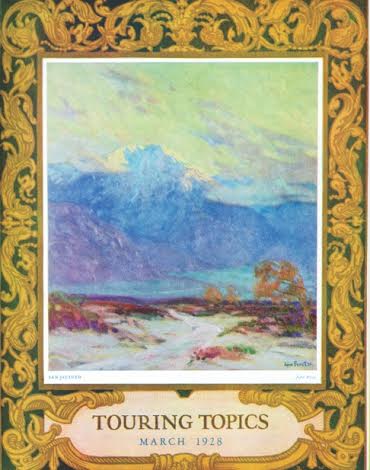 Later in June, he sailed to Avalon on Santa Catalina Island; while there, in one of the last extant letters from his parents in 1919, he was cautioned by Nimmie not to rush into anything with his new love interest. In the remaining months, until December, no information is available about his activities. Certainly, Betty continued to be a regular topic in his later correspondence, as was Bo and Nimmie’s planned move to California.

In mid- December 1919, Bo wrote to Daggy [a family friend], informing him that he and Nimmie had left Morristown on the 9th and joined Jack at the Desert Inn:

Jack decided some time ago that he did not want to return to the East, he has improved very much in health and he likes the place and the people and wants to live in California for the rest of his days. Naturally where Jack is is the place for us so we decided to come out here to live with him. 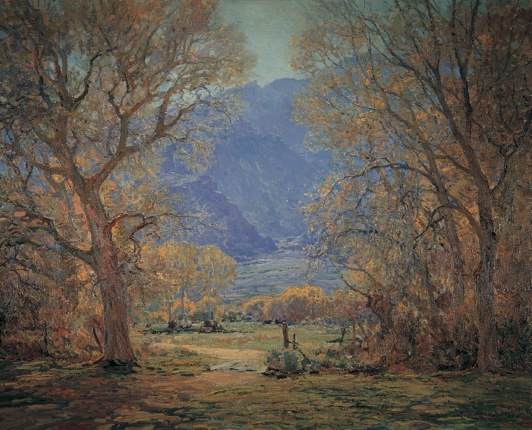 This place is an oasis in the Colorado Desert, a Hotel and a lot of bungalows, all one story and very neat and comfortable. . . .

The whole place covers probably 200 acres and all around it is desert, the same old desert that has existed for centuries. It is amusing to go out with Jack when he paints and not a hundred yards or so from the road and see 20 or 30autos pass in a morning.

It is a beautiful place to paint, yellow sand, green creosote bushes and the best pale yellows and houses, with beautiful snow capped mountains all around the valley.

Bo also discussed Jack’s work, but he failed to mention that residing in the bungalow next to theirs were Betty and her mother.

Regarding Jack’s progress as a painter, Bo told Daggy that his son’s work had “improved wonderfully, remarkably, he gets some beautiful things, nearly all desert stuff, he is much easier and freer, had got rid of the edginess that was in his work of two years ago, and his color is excellent. He is encouraged constantly by sales, sold a picture yesterday. I hate to part with his pictures, but it is a good thing to sell them, it shows appreciation, and encourages him.” 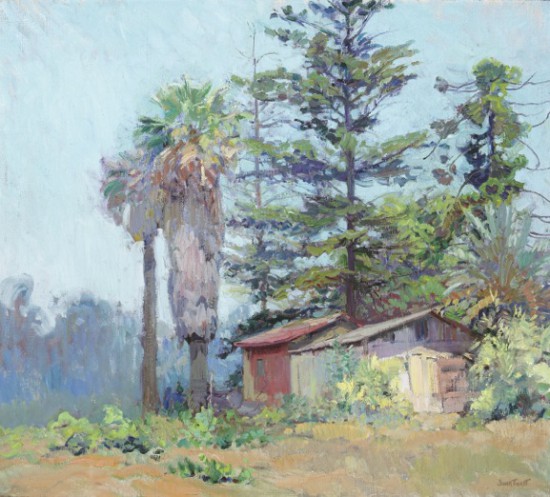 Bo could well have added that during his son’s latest sojourn in the West, dating from early February until the Frost family went to Pasadena in May 1920, his work had been sought by numerous individuals, including several celebrities. Eileen Percy, who was soon to gain star status, posed for a number of sketches and bought several. Farnum, too, became a collector. Some of the cowboys working in the Grey films found his renderings appealing—truly pleasing Jack—and acquired a number of them, prompting Bo to say, “I am delighted to hear that they [the cow punchers] wouldn’t sell your picture.”

Phil Kovinick is an independent writer, researcher, lecturer and consultant who co-curated exhibitions on desert and mountain landscape art at Laguna Art Museum and Saddleback College. Along with his wife, Marian Yoshiki-Kovinick, he authored An Encyclopedia of Women Artists of the American West. 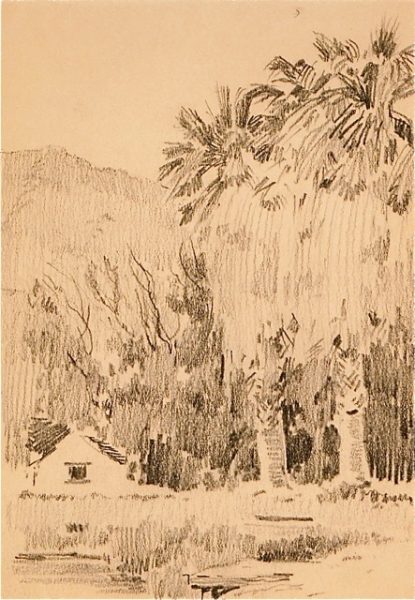 ← Henry Mockel: The Philosopher of Flowers
Bidding On Agnes: A Newbie Goes to An Art Auction →