Nature’s Secrets, a large desert landscape painting by Joshua Lawrence Meador, hung prominently in every home my mother lived in. My parents purchased it in 1963 as the centerpiece of our living room. They were told Nature’s Secrets was painted in Palm Springs, one of their favorite vacation destinations. 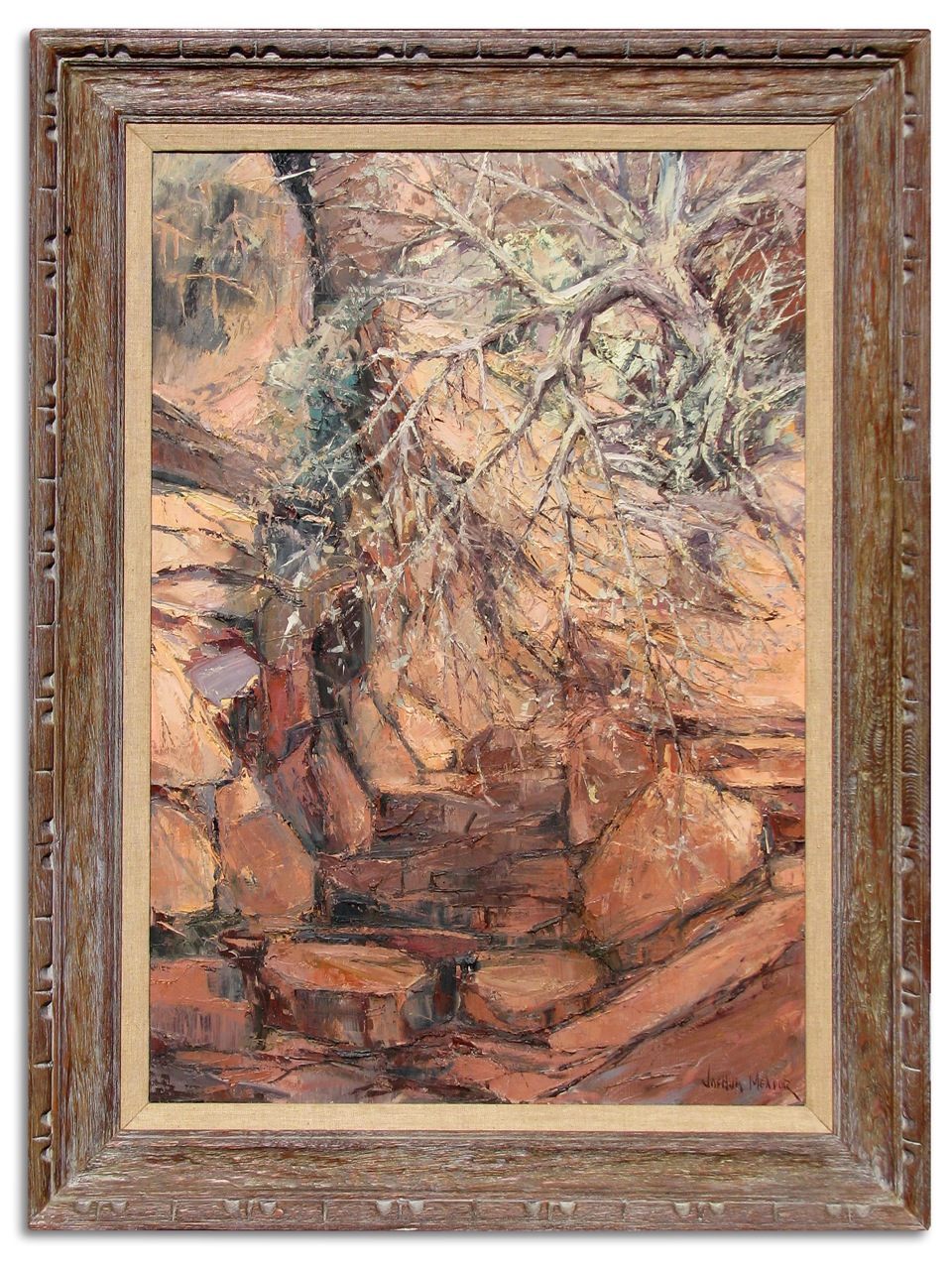 My mother had a great appreciation for the arts. Her father, Harold Newsom, was a lesser-known Bay Area painter active in the 1920-40s. Her great uncles were the Newsom Brothers, well-known Victorian-era California architects, famous for the wildly ornate Carson Mansion in Eureka, California.

A few years ago, I began doing research on Josh Meador and discovered the significant role his employer, Walt Disney, contributed to the school of desert artists. Meador was Disney Studio’s head of special effects from 1939-60. He won the 1954 Academy Award for special effects in the Disney animated film 20,000 Leagues Under the Sea.

Though best known for his special effects in Disney Classics including Snow White, Bambi and Fantasia, Josh Meador was trained in fine arts at the Art Institute of Chicago, where he graduated with honors in 1935. Almost immediately, he landed work at Disney Studios. 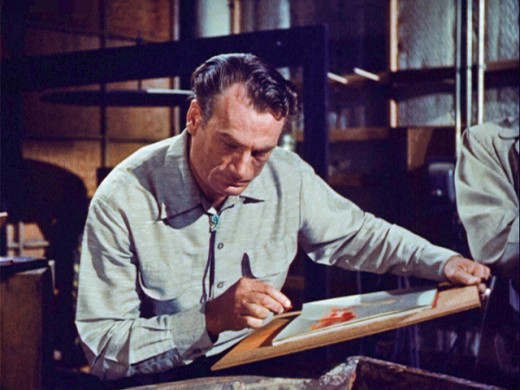 When I was growing up in La Canada, California, Josh Meador lived in nearby La Crescenta, and was a family acquaintance of ours—along with his fellow Disney artists Preston Blair and Ralph Hulett. Meador was also close friends with the noted Western artist Conrad Buff, who lived in nearby Eagle Rock.

My interest in Meador — in addition to the family connection—is because his career somewhat parallels my own. I earned a BFA in drawing from the California College of Arts and Crafts, and have worked as a commercial illustrator for over 35 years. When I was growing up, I studied illustration with Disney artist Ray Vinella. Like Meador, I attended art school, and have a fine arts degree, but make my living as a commercial illustrator. Also, like Meador, I am a painter, and use my training to create fine art.

In the early 1930s, Disney started coming to Palm Springs to visit Smoke Tree Ranch, a private enclave and exclusive dude ranch. He built a home there in 1948. His other major accomplishments overshadow the fact that he was an ambassador for the desert, and frequently invited desert artists who worked for his studio to paint at the ranch. 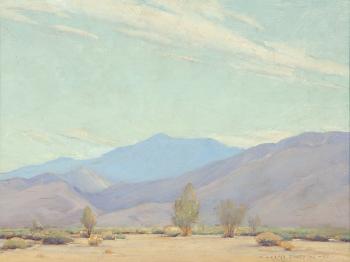 “It appears Walt used stays at his Palm Springs ranch as one of the perks he passed out to his friends and valued employees — his version of Hearst Castle,” says Daniel Rohlfing, co-owner of the Bodega Bay Heritage Gallery. Rohlfing’s wife and business partner Linda Sorensen handles the Meador estate for the gallery. Together Dan and Linda have done much to document and promote Meador’s work.

Meador’s granddaughter, Talitha Meador, says the artist spent time in the desert mining as well as painting—making him a true desert rat. Disney must have been especially fond of Joshua Meador’s work, as the family collected over 50 Meador paintings.

Smoke Tree Ranch and the surrounding desert served as inspiration for Disney’s 1953 nature documentary The Living Desert, part of the True Life Adventure film series. Filmed in Arizona and also the Coachella Valley, it won the 1954 Oscar for Best Documentary and (some say) inspired the nature documentary genre still popular today.

Walt Disney commuted to his desert getaway in his eight-passenger Beechcraft Queenair, according to a 1965 article in Palm Springs Life. Today, Smoke Tree Ranch is an exclusive resort. The Disney house has been preserved, and with it—according to Chief Operating Officer Tracy Conrad—a collection of plein air desert landscapes by Josh Meador.

Meador worked on animation effects for the Living Desert film. According to Palm Springs Life: “The cameraman went to the Salton Sea to photograph mud pots and out on to the desert to record the opening of the night blooming flowers.” Lloyd Mason Smith, an early director of the Palm Springs Desert Museum (today the Palm Springs Art Museum), worked closely with the crew.

The success of the film and Disney’s love of the desert in turn led to the (now defunct) Nature’s Wonderland exhibit at Disneyland. The exhibit had several incarnations: First mule trains, and later a narrow-gauge railroad took passengers through desert canyons. 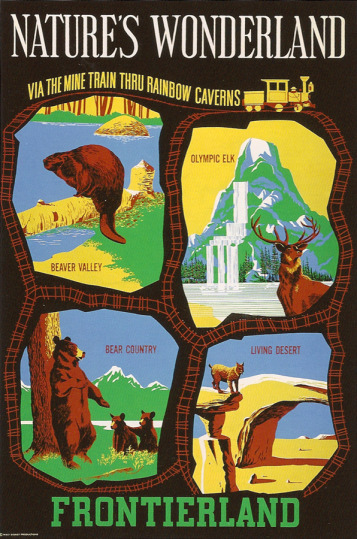 Walt Disney’s daughter, Diane Disney Miller, says her father sent Meador to Smoke Tree Ranch on assignments to do plein air landscapes. It is unclear whether these assignments were to produce studies for Disney film productions – or to paint fine art to decorate the Disney home.

Diane Disney Miller has seen our painting and believes it is indeed a plein air piece that was painted in the canyons near Smoke Tree Ranch — possibly in Andreas Canyon. There is a second, similar Smoke Tree Ranch desert painting displayed at the Disney Family Museum at the Presidio in San Francisco.

In the upper left of our painting, there are distinctive petroglyphs or pictographs. They could be a loose impression, or possibly a faithful rendering that might be used to identify the exact spot the painting was made. Coachella Valley archaeologist Harry Quinn says he does not know of a panel that looks like this in Andreas Canyon, but the figures are true to local rock art.

The son of Disney artist Ralph Hulett looked at the painting recently, and placed it somewhere in the early 1960s, but the Meador’s numbering system suggests it was painted earlier.

If the painting dates to the early 1950s, it may well be linked to the film. The title alone suggests a connection. The palette and composition also resembles the dioramas in the Nature’s Wonderland attraction known to every kid who grew up in Southern California in the late 50s and 60s. According to Linda Sorensen, Nature’s Secrets, which measures 40 x 27”, is the largest known work by Josh Meador.

Joshua Meador was living in Mendocino County when he died in 1965. He was recently honored by his hometown of Columbus, Mississippi, with a Josh Meador Trail marking points of interest in his life. While his Columbus days are well documented, it’s less known what trails he took through the desert. Further research will uncover more on Meador and Disney’s connection to the Smoketree School.

Karl Edwards is an illustrator living in Portland, Oregon. www.karledwards.com

Nature’s Secrets has been in the writer’s family for decades. They are now ready to pass it on to a new owner, and ideally return it to its rightful home in Palm Springs. For more information: illustration@karledwards.com.

For more on Joshua Meador: 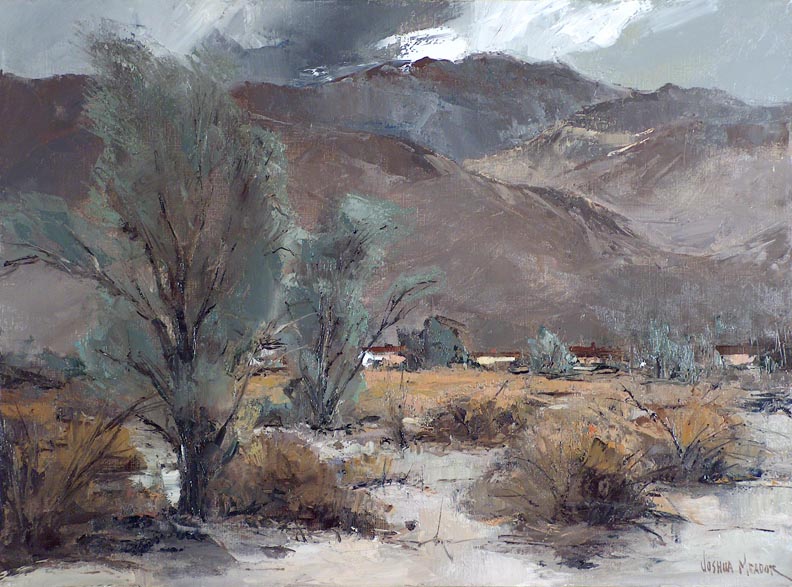