One of the premier Impressionist painters in the US in the early 1900s,  Julian Itter was also a Mojave desert artist and gold miner. Yet none of his desert paintings have been found. Adrienne Sadlo, a student at Eastern Washington University, hopes to find the paintings as part of her thesis project on Itter. Before moving to California in 1926, Julian Itter painted extensively in the mountains of Washington state, helping to preserve Lake Chelan and earning the title Father of North Cascades National Park. 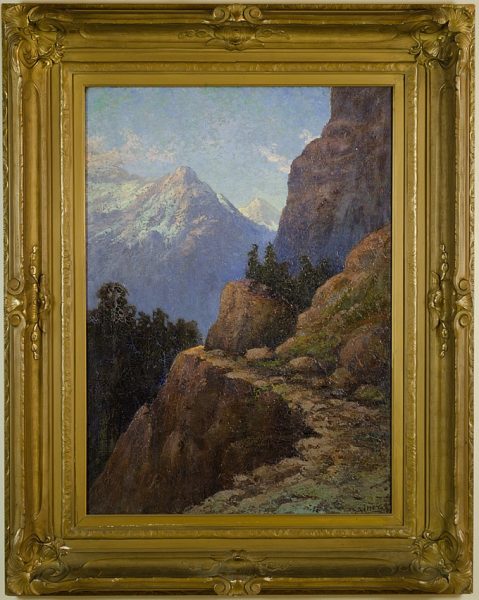 “When Julian moved to Southern California in 1926 he kept his passion for art and painted a whole series of desert and ocean landscapes in oil and watercolors,” Sadlo says. “He held exhibits for wealthy patrons, and he displayed his work in galleries throughout Southern California, most notably Laguna Beach.

“From 1933-1939, he resided in Barstow, California, where he was president of the Mojave Desert Mining Association, a collective group of mine owners.”

This is a desert artist worthy of rediscovery. If you find one of his missing paintings, you can reach Adrienne at adrienne.sadlo@eagles.ewu.edu

Another forgotten artist for your Watch List: Anna Bell Krebs, also known as Columba or Columba Krebs Culverwell (1902-1998). If there’s anything better than a Lost Desert Artist (LDA), it’s an LDA who is a Theosophist–like Cabot Yerxa and Agnes Pelton–and also a UFO devotee. 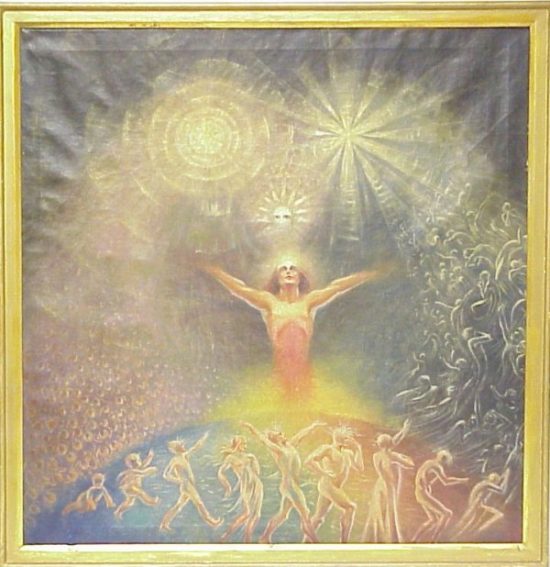 This find is thanks to Mark Esping, who writes: “I am contacting you because of a notation I found that Columba lived somewhere in the vicinity of Joshua Tree. She was associated with some of the early UFO contactees. She painted in oils and also did drawings. She published a cartoon strip, which appeared in South American papers and later was published as a soft cover book in the United States. It was titled Skuddabub.”

It took six months of diligent sleuthing for Mark to put together the name Columba with Krebs. He is gathering biographical material to accompany a reprint of a book by Columba–The Moon is Inhabited. If you own a Columba Krebs painting or have further information on her life and career, please leave a comment below or write to Mark Esping: nequathebook@gmail.com.

If your summer travels take you to Orange County, consider a visit to the new Hilbert Museum of California Art at Chapman University. The Museum, which opened in February, is devoted to the California Scene painting movement– watercolors that depict narratives of everyday life. The collection was a gift from longtime collectors Mark and Janet Hilbert. The Newport Beach residents also have a home in Palm Springs and are fans of desert art.

In an era when modern art is ascendant, the Hilberts have consistently championed the less-fashionable but emotionally engaging works of artists such as Millard Sheets, Emil Kosa Jr, Phil Dike and Rex Brandt. Many of these artists painted in the Palm Springs area in the course of their careers.  Thanks largely to the Hilberts, the Scene artists have risen in status and have a permanent place in California art history. 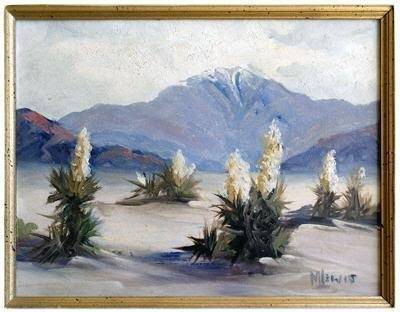 “I found the painting some years ago in San Juan Capistrano and have loved it since,” Linda writes. In fact, she liked it so much she made it her screensaver. The artist is included in Gaudens’ guide as Mary A. Lewis, one of a small group of early Sacramento landscape painters. Her style was influenced by William Merritt Chase, her teacher in a 1914 class.

Thank you to Linda Malloy and everyone who has written with leads to under-recognized desert artists.

The National Park Service celebrates its 100th birthday in August, 2016; corresponding art exhibits around the country illustrate the enduring link between landscape artists and the National Parks. As part of the festivities, Michael Gordon exhibits his Joshua Tree and Death Valley photographs at the Viewpoint Photographic Center in Sacramento, August 10 to Sept. 3rd. 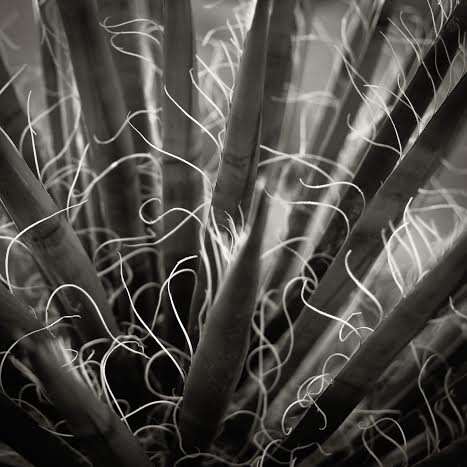 In another National Parks event, Erin Hanson–previously featured on this website–sold out all 40 paintings from her Painted Parks exhibit  at St. George Art Museum in Utah. She uses hand-mixed paints and a thick brush for a sculptural effect that is clearly popular with collectors. 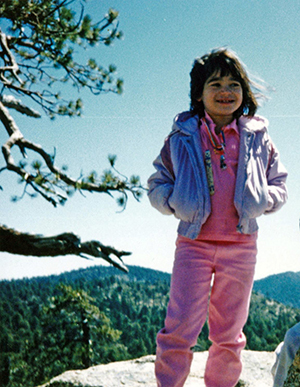 Hanson has been camping in the parks since she was a child growing up in LA. A frequent visitor to Joshua Tree and Anza-Borrego, she assures us there will always be more park paintings. “I will continue to paint the National Parks for the rest of my life,” she says, “and I hope my paintings inspire you to visit your favorite Park this year.”

Read about her wilderness adventures here:

If you’re traveling in Arizona this summer, art dealer and scholar Gary Fillmore suggests you stop by the Desert Caballeros Museum in Wickenburg to see an exhibit (through November, 2016) on artist Marjorie Thomas. The pioneering Arizona artists were soul-kin to the Smoketree painters of the Palm Springs area, sharing a respect for Indians and a passion for empty places. They often wandered across state lines seeking prime desert vistas.  Gary Fillmore explores the life of Marjorie Thomas–a traveling companion to Zane Grey–in his captivating blog Looking for Jimmy.

Indio artist Glenda Nordmeyer alerts us that her friend Bill Ogden has been named the Sawdust Art and Craft Festival’s 50th anniversary guest artist (June 24-August 28, 2016). The artist, who lives in the mountains above Palm Desert, is an esteemed 1970s surf artist who also paints desert landscapes. Ogden was a founder of the original Laguna Beach Sawdust Festival, and he painted this year’s festival poster. 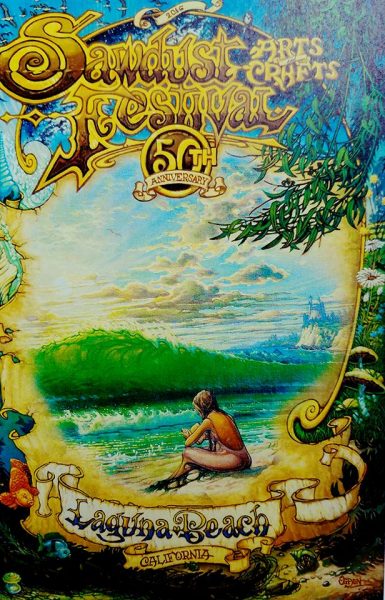 Walking the Labyrinth with Greg Frux and Janet Morgan

If you’d like to be an adventure artist in the style of Erin Hanson and the great Tony Foster (a nomadic watercolor painter), consider taking a wilderness immersion trip this October, 2016. Join teachers Greg Frux and Janet Morgan as they wander Southern Utah’s labyrinths of canyons, with paints. This is a 4-night, 5-day explore-sketch-paint tour with some of the most dedicated adventure artists around. 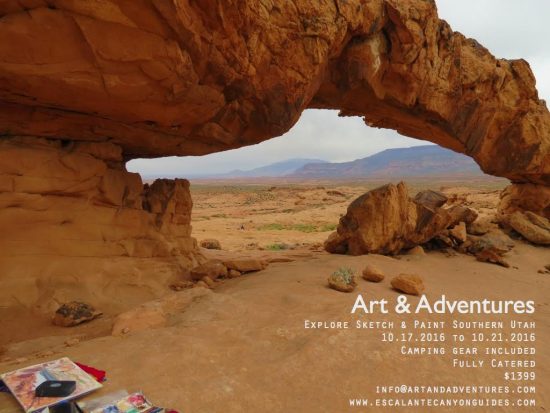