When Barbara Nickerson put an ad in the Borrego Sun looking for early Borrego desert paintings, she wound up filling in missing pieces of California art history.

The Executive Director of the Borrego Art Institute, Nickerson appealed to local collectors who may have paintings of the area in their homes. Right away, the calls came in. “We are in the midst of a happening!” Nickerson reported soon after her notice appeared. “We’ve got three nice Bartkos, four or more Marjorie Reeds, one large Ivan Messenger…” 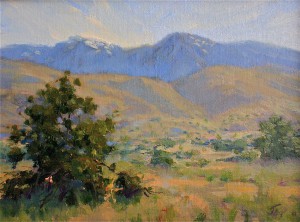 To bring the past and present together, 14 contemporary artists also made a pilgrimage to the final home of stagecoach painter Marjorie Reed. The group spread out with their easels around Reed’s red shack on the route of the Butterfield Overland Stagecoach. Inspired by the location, Invitational first-place winner Jeff Sewell painted “Marjorie’s View” in honor of Borrego’s most famous artist. 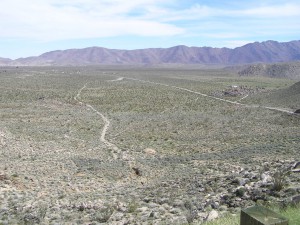 In the historic display, “Rim of the Mojave Desert” by Ivan Messenger, was on loan from Kay Levie, who just retired after 27 years at the Borrego Sun. The painting hung by her desk, and was given to her as a going-away gift. A member of a group called the San Diego Moderns active in the 1930s, Messenger owned a home in Julian and traveled down the Banner Grade to paint the desert.

Artist Liesel Paris, who owns a gallery in town, loaned an artist’s sketchbook by Armand Vallee, an Austrian-born painter who died in 2009. His diverse specialties included primitive cave art, totem poles and the California desert. 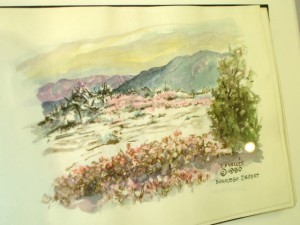 Roy and Amy Jennings loaned a selection of William Bartko’s works. Bartko was a member of the Desert Art Center in Palm Springs, and lived in Borrego Springs from 1961 until his death in 1989. The exhibit included a rare black-and-white smoketree by Bartko. Usually painters depict the iconic smoketree as silvery grey-green.

A desert painting by William Galen Doss, one of the earliest Laguna Beach painters, was on loan from Craig and Barbara Claypool.  Doss was Craig’s great-uncle. 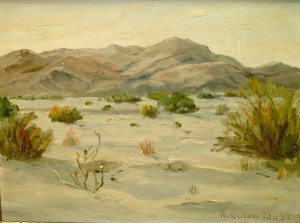 California Desert Art donated a 1930s Edith Purer painting to the Institute’s permanent historic collection. Purer was an early California botanist who turned to painting while out hunting desert specimens.

The Park family loaned Marjorie Reed’s “The Butterfield Mail in Mason Valley”.  One of the best-loved Western painters anywhere, Reed first visited the red shack on the old Campbell Ranch at the suggestion of artist John Hilton; she lived there in her final years until her death in 1996. 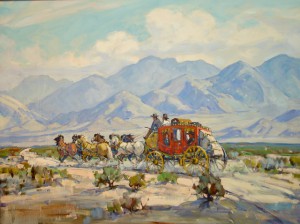 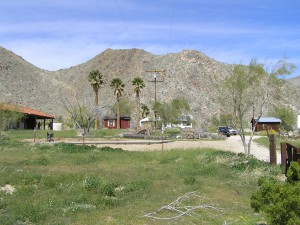 As the Borrego exhibit shows, each California desert region—Mojave, Death Valley, Anza-Borrego, Palm Springs–cultivated its own subgroup of artists. The particularities of those enclaves are still being discovered. In Borrego, for instance, most artists did not come from LA or Laguna but drifted over the pass from the active art community in San Diego. Some of San Diego’s (and California’s) most enduring Impressionist painters—Maurice Braun, Alfred Mitchell, Charles Fries—frequented Borrego in the first half of the 20th century. Another Borrego Impressionist who came over the hill from San Diego, Charles Reiffel is famous for his undulating brushstrokes and bold, modern use of color.

The great painters brought students and disciples with them to Borrego. The scope of the works they painted in this quiet desert region is just starting to be discovered, as artist Barbara Nickerson continues her hunt. The success of the Borrego exhibit shows there is a lot of desert art history still to be found—if you just ask. 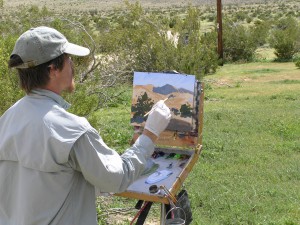