Inspired by the recent California Desert Art article on Lynda Keeler’s maps, Michael Moore sent some of his own “imaginary topographics”. For decades, the widely exhibited artist has been exploring and mapping the northern Great Basin Desert. He grew up in the LA suburb of La Canada, studying with George F. Anderson (an Ansel Adams-style photographer) and getting to know the California desert. His maps are included in a current exhibition, The Space(s) Between, a multi-site event in Colorado through July 25, 2021. 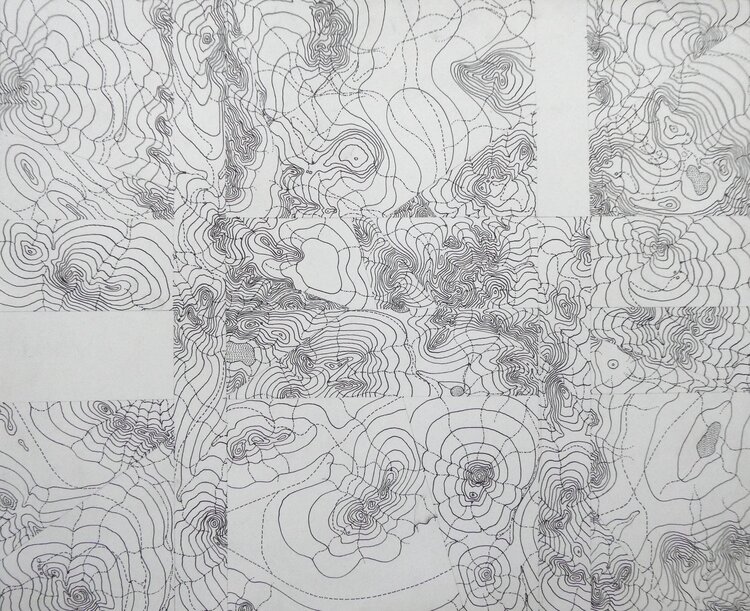 The show boldly invites landscape—often a taboo or antiquated theme in the contemporary art world—back onto the stage. Moore’s own maps are “a direct result of wandering, turning USGS topos this way and that, wondering what the hell could be down that vanishing two-track on the mesa, across the dry lake, over the next hill…”

My introduction to Carl Chew started with an unassuming note: “My parents owned two Henry Mockel oil paintings. I’m trying to see if there is an appropriate collection that might want them.” It turns out that Chew is a celebrated, psychedelic-pop artist from Seattle–though his website says he is the World’s Most Famous Unknown Artist.

“Both my parents and I knew Henry,” he wrote, referring to the botanical artist from Joshua Tree. “My father, Robert Chew, was a desert ecologist teaching at USC. My mother, Alice Chew, taught biology and zoology at Santa Monica College. As a young family in the 50s we spent lots of time camping out in the desert around Twentynine Palms. Later on my parents began work on 20 acres down in southeastern Arizona in the Chiricahua Mountains, where they moved to permanently in 1978. They both loved Henry Mockel’s work and owned numerous serigraphs of his, along with quite a few paintings. After getting my own degree in zoology I turned to printmaking and received my MFA from the University of Washington in 1975. I love my memories of chatting with Henry and his wife and purchasing a number of his works myself. 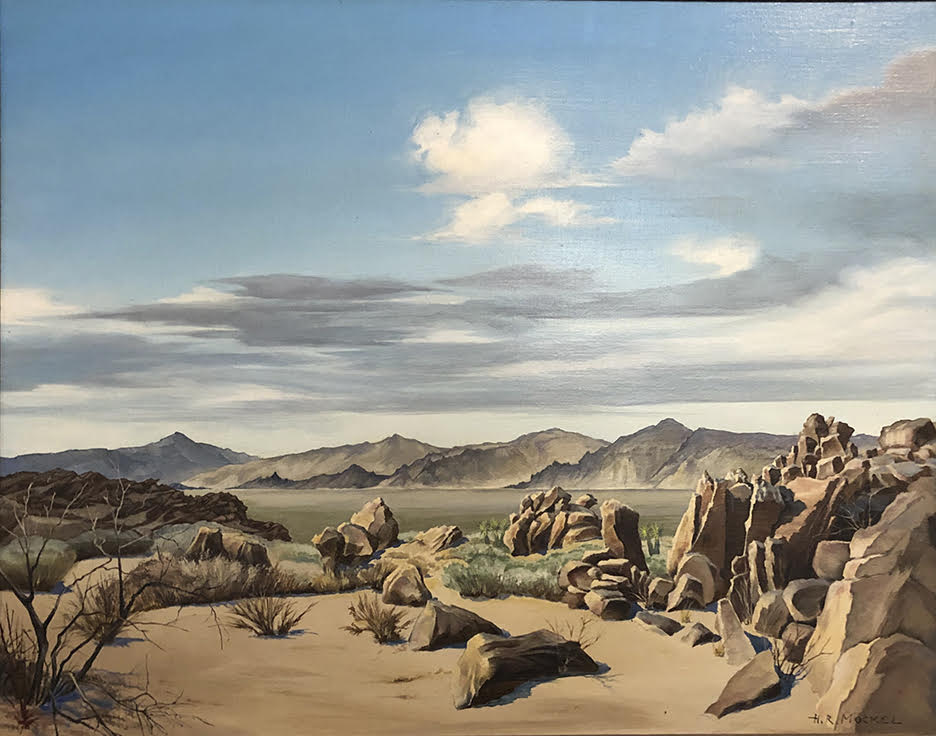 “Being a young enthusiastic printmaker myself,” he adds, “my memories center around the awe I had for Henry’s craft. His drafting/painting skills in creating 40+ screens to complete the beautiful nuanced colors in his prints. His exacting patience in being able to print all those screens perfectly. His choice of gorgeous papers to print on. These are the things we connected on.”

Chew would like to further Mockel’s legacy by donating his two Mockel paintings to a public collection, museum or university–or by selling them to a private collector of Mockel’s work.

Glenda Rice rescued an Agnes Pelton abstraction that had been discarded by her late cousin’s estate, in a story first detailed here. She and her husband Rick visited the Palm Springs Art Museum last week to see the resurrected painting. Glenda wrote:

“What a journey this beautiful painting has taken. It came into my possession back in 2011 after the passing of my cousin, Mario Acord. The executor of his estate told our family if we wanted what was left of his possessions we’d have to come to Tucson and pick them up, otherwise everything was going to the Goodwill. Rick and I headed to Tucson to bring home whatever was left to divide up with the Acord family. Among the things was this painting by Agnes Pelton, Translation, 1931. I had seen it hanging on Mario’s wall during visits and always loved it, but unfortunately never asked him about it or where he got it. No one else wanted it so I was more than happy to take possession of this interesting piece of art. I had no idea who the artist was, I just loved the colors and the calming way it made me feel.” 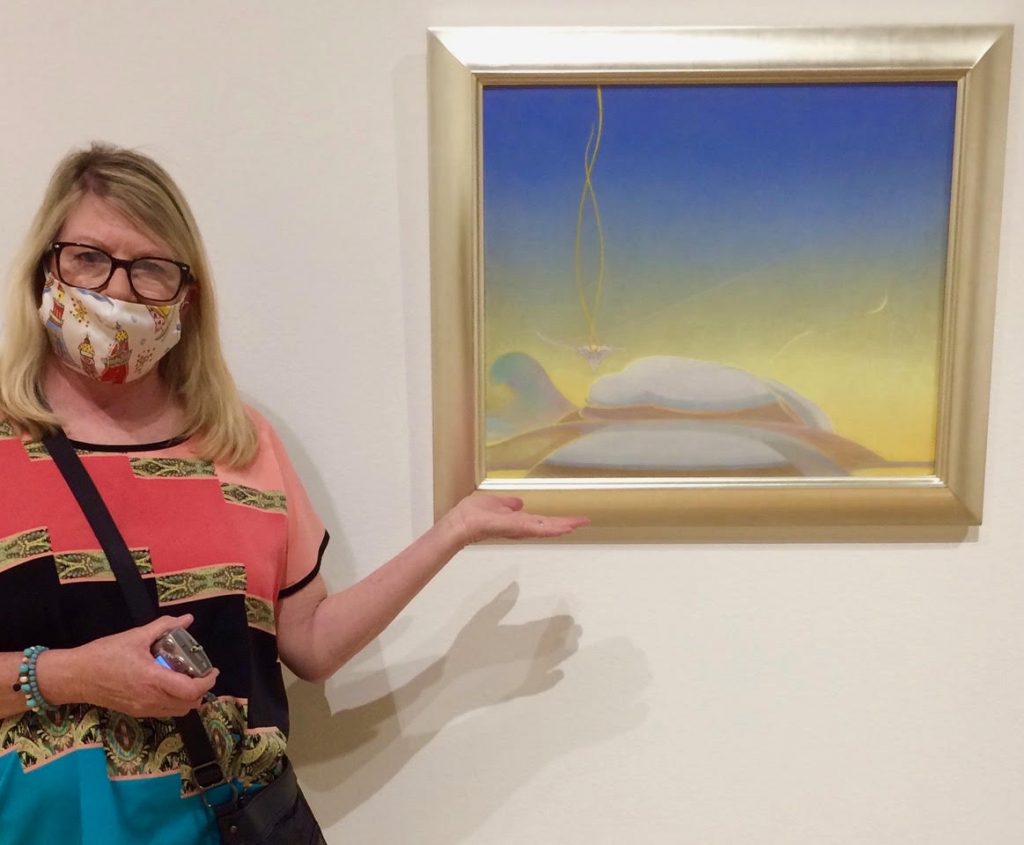 Glenda Rice with the painting she rescued, at the Palm Springs Art Museum.

“We did know it needed preservation work,” she adds. “We spent some money and had the work done, brought it home and hung it on our wall….In 2017 we sold it to a well-known art dealer and here it is currently at the Palm Springs Art Museum as part of the Agnes Pelton, Desert Transcendentalist exhibition.  Turns out Rick and I were only a temporary custodian of this special piece of art.”

Agnes Pelton: Desert Transcendentalist is on view at the Palm Springs Art Museum through September 6, 2021.

A Tribute to Ron Backer

Ron Backer dropped into the Coachella Valley from South Dakota and immediately tuned in to the stories of pioneer schoolhouses, stagecoaches and Indian wells. He molded those tales into his “story paintings”. When his wife, Elie, called to tell me Ron had passed away on Christmas Eve, 2020, I knew we’d lost our own Steinbeck. Elie told me about something that happened the night he died. Several police officers remained at the Backer home after the paramedics left. The lights in the house were low, so the officers switched on their flashlights in the hallway. Amazed by the scenes on the walls, they reverently went from painting to painting, talking in low voices as if they were in a gallery. At the hour of Ron Backer’s death, the police officers marveled–as I do–that this storyteller lived quietly among us. 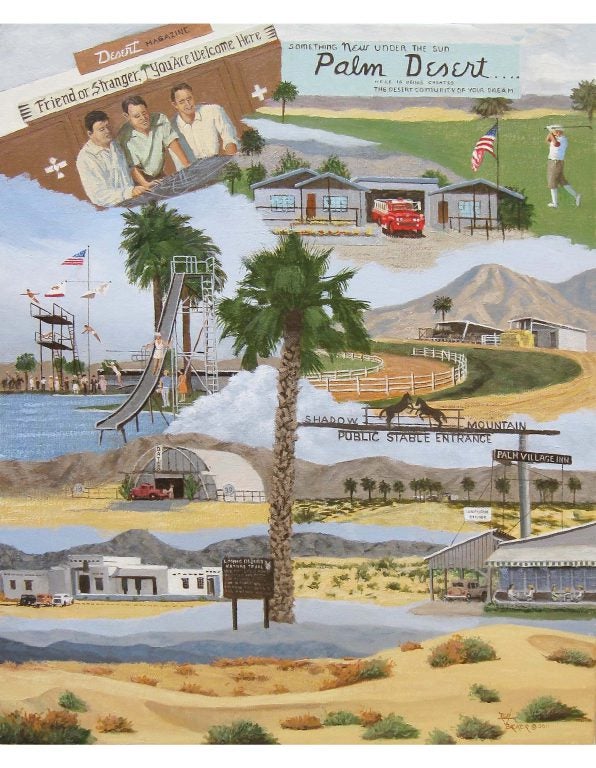 In Memory of Daniel McCarthy

A major figure in desert rock art, Daniel McCarthy, died in February, 2021. An archaeologist who served as tribal liaison for the US Forest Service, he spent decades recording California rock art, pictographs and petroglyphs. He was a Vietnam Veteran who was awarded a Purple Heart. Upon returning home from the war with shrapnel in his leg, he found solace in the deserts and mountains, according to his friend Travis Armstrong. McCarthy later returned to Vietnam and Laos to aid recovery efforts of MIAs. Many people, including myself, met him on one of his traditional agave hunts in the Santa Rosa mountains. Each hunt wound up with an agave roast at the Malki Museum. His collection belonging to the Agua Caliente Cultural Museum can be found here: https://calisphere.org/collections/14202/

A tribute by Travis Armstrong: https://scahome.org/announcement/daniel-mccarthy-a-tribute/

Read more about Daniel McCarthy in this edition of News from the Dorothy Ramon Learning Center in Banning–one of the richest publications in the region.

In the current issue, editor Pat Murkland introduces us to the lore of Ferocactus, otherwise known as barrel cactus, and invites readers to send art and poems honoring native plants:

When the Desert Hot Springs Historical Society purchased the circa-1946 Pil-O-Rox rock house for their new headquarters, they didn’t know they were getting a desert art monument in the deal. A perfect example of vernacular architecture (made from indigenous materials), the house was built from native rock by Lee Watkins. Watkins also built every piece of furniture in the house from cholla wood, harvested from the Devil’s Garden (seen in the Dorothy Ramon newsletter, above) cholla fields nearby. “We have been trying, but have found no cholla furniture,” says society spokesperson Marge Snell. Contact the historical society if you find an original Lee Watkins cholla chair.

In more Desert Hot Springs news, historical society researcher Sue Swafford recently turned up the story of Betty Hamilton, a forgotten folk artist who built historical tableaux from discarded hair curlers, macaroni, the fur of an Alaskan husky and other objects. If you visited the town in the 1980s, you could pay a visit to the Kingdom of the Dolls museum, viewing scenes ranging from the beheading of Anne Boleyn to the collapse of the lead singer at a Black Sabbath concert. Hamilton “single-handedly reconstructed the history of civilization, depicting scenes and events as faithfully as she could, all at the scale of eleven-inch dolls,” wrote Sean Dockray. 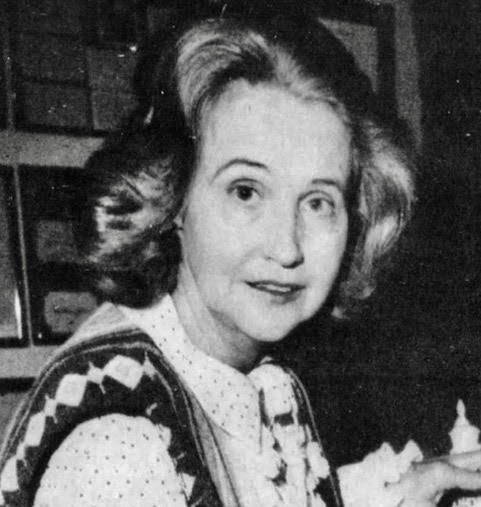 Betty Hamilton, creator of the Kingdom of the Dolls in Desert Hot Springs.

When Hamilton moved to Joshua Tree in 1990, she hoped to find a new operator for the museum at 66-071 Pierson. “Her fondest hope was that someone would take care of her babies that she had spent 30 years of her life creating,” Swafford writes in the historical society newsletter, Desert Footprints. “Sadly, it was not to happen.” We can still hope some of the dolls show up—remnants of Betty Hamilton’s imagined worlds.

Martha Turner was hanging framed artwork over the bed when a tornado hit her Texas home. This led to the epiphany that quilts were lighter and safer to hang on the wall. “That was the start of my art quilting and I’ve been making them ever since,” says the artist, who now summers in Nebraska and winters in Borrego Springs.

She and her husband and their friend Chan were hiking in the renowned Slot in Borrego this past winter, when Chan stopped to stack a rock sculpture. Martha’s husband Bob snapped a picture and Martha later translated the timeless desert moment—person plays with rock–into fabric. 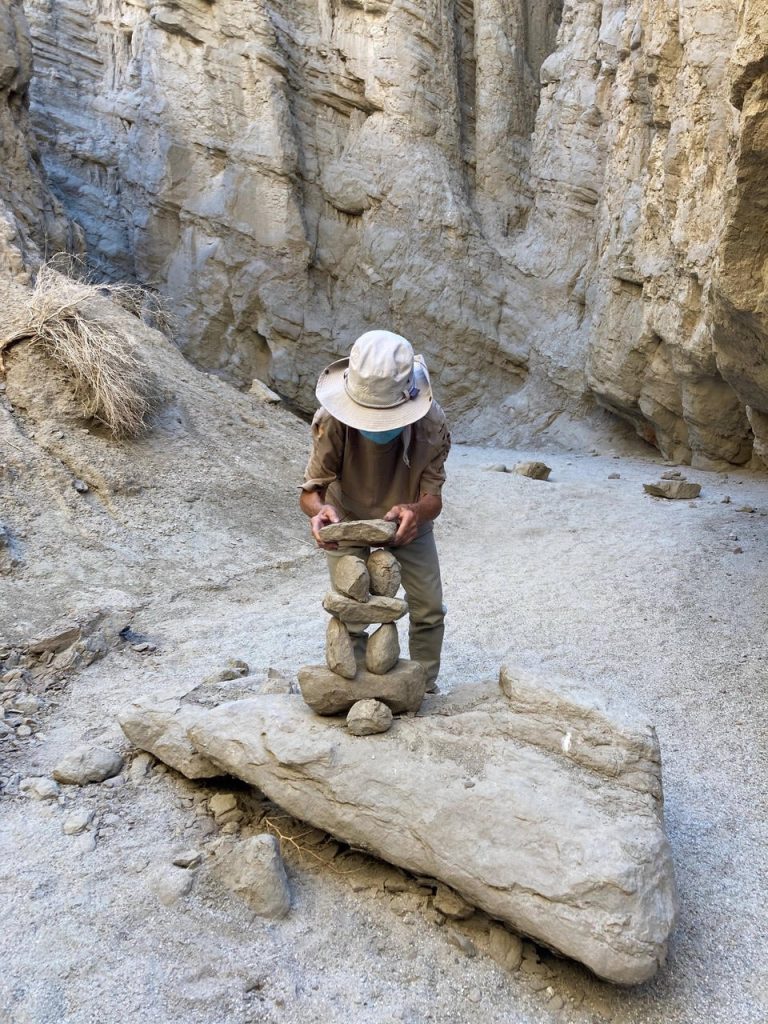 Bob Turner’s photograph of Chan stacking rocks in The Slot. 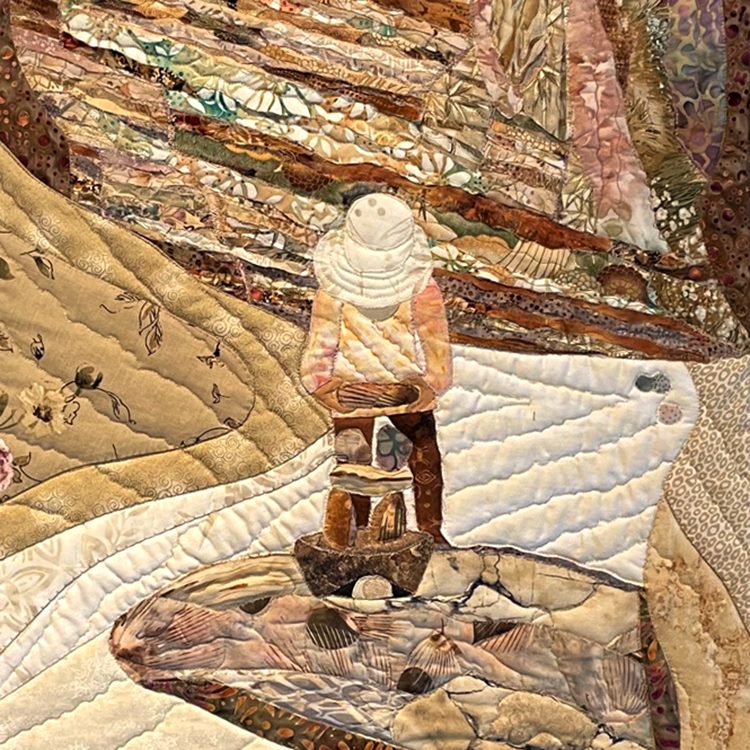 The quilt recently appeared in a show at the Borrego Arts Institute. With that show and others, Borrego Springs surges into first place as a destination for authentic desert art. The Borrego Arts Institute plein air event last month attracted the best line-up of painters I’ve seen of late. Spend some time on their Facebook page catching up with spirited artists such as Martha Turner, Martha Larlham, Barbara Tapp, Ryan Jensen, Natasha Isenhour, Jim Wodark and many more.

Fiber art may be the perfect medium to capture desert time and rock, judging by the work of Martha Turner and also Catherine Clark. A resident of the White Mountains in Arizona, Clark has served as artist-in-residence at Montezuma Castle and has an upcoming residency in September, 2021, at the Painted Desert/Petrified Forest National Park. She studied geology and taught 9th grade science, a background that helps her “take the long view” of life and art. In her piece, Triassic Timewall, “shadowy creatures formed in a time when the earth was younger march across the face of a cliff above modern-day scientists carefully examining fragmented fossils of their bones.” 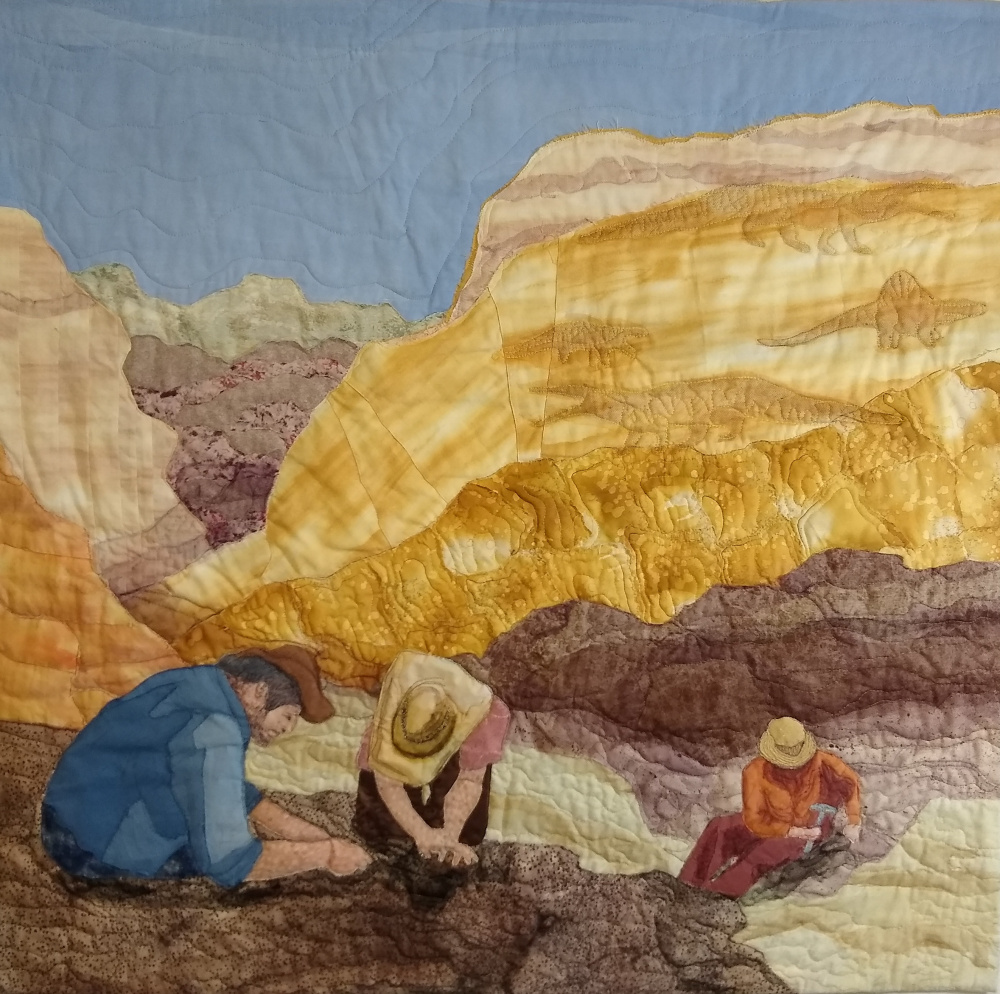 Mari Coates’ novel, The Pelton Papers, depicting the life of Agnes Pelton was published at the start of the pandemic but still managed to find a devoted audience. Now that Pelton’s exhibition is open at the Palm Springs Art Museum, stop by the Just Fabulous shop downtown on April 17, 2021, 3-4 pm, and hear Pelton read from her graceful novel. With the passing of the ur-Pelton scholar Michael Zakian, Mari Coates likely knows Pelton’s story as well as anyone you’ll meet.

Warner Graves, grandson of early Mecca photographer Lula Mae Graves, continues to follow in his grandmother’s desert immersion tradition. The Cathedral City resident has been intensively painting the local canyons, as well plenty of ferocactus, catsclaw and cholla. “I’m mad for cacti,” he says. See the results of his study at the 29 Palms Art Gallery through April 25, 2021. He shares the stage with Khyrysso Heart LeFey, whose patterned work is inspired by quilting. 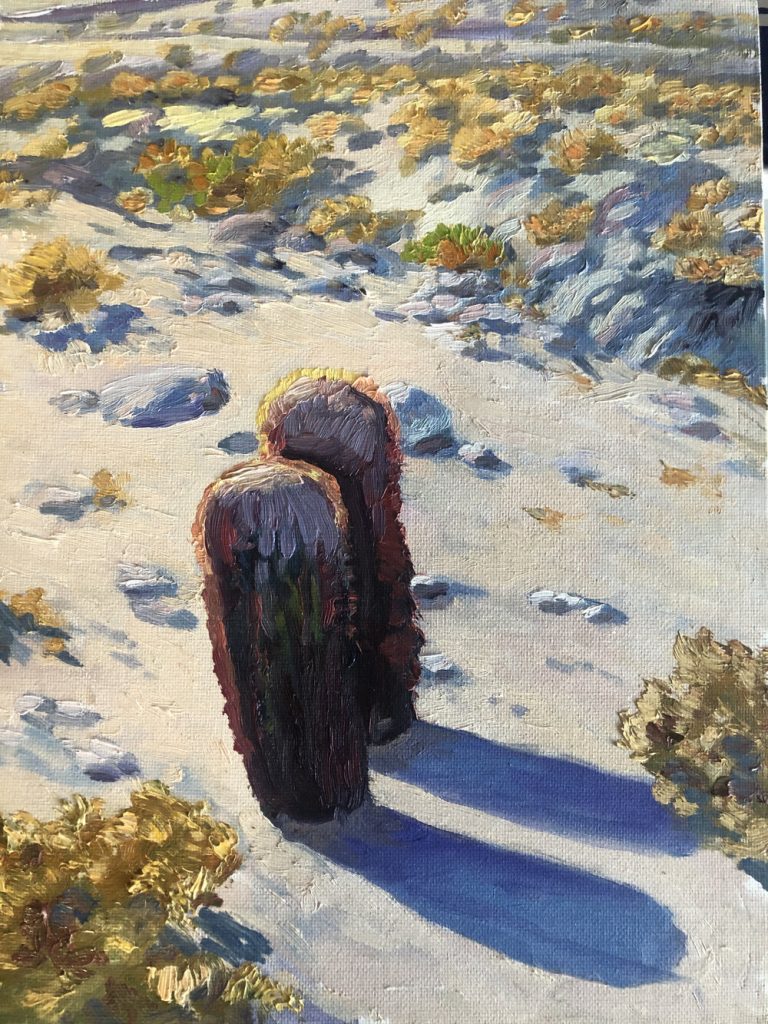 The book that Warner Graves and I edited—Postcards from Mecca—is featured in an exhibition at the Grace Carpenter Hudson Museum in Ukiah starting in May, 2021. The photographs on display tell the story of Lula Mae Graves and Susie Keef Smith, postcard photographers based out of the Mecca post office. Thanks to the nonprofit Exhibit Envoy, Susie and Lula will be traveling to several small California museums. The Grace Hudson location is a good fit for the duo, as Grace Hudson was herself an early painter of the Pomo people of Northern California. Augmenting the desert photos are early photographs of the Mendocino country by Hudson’s father, A.O. Carpenter. 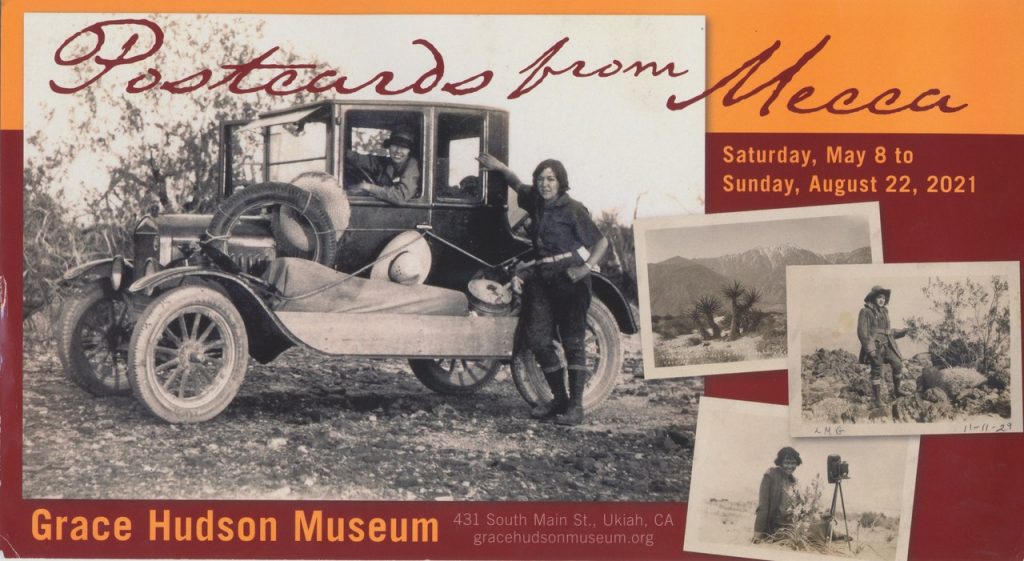 Ruth Nolan was named the first-ever Mojave Desert Literary Laureate by the environmental organization Basin and Range Watch. The Palm Desert resident is a former wildlands firefighter and a professor of English and creative writing at College of the Desert. In her new role, Nolan will help others to tell their own Mojave stories, a critical step in encouraging the next generation of artists, poets, writers, quilters and cartographers.