Never underestimate the benefits of publishing on the California Desert Art website!  A couple of years ago I had the pleasure of having my article, “Smoke Tree George: The Fabled Life and Times of George Frederick Gleich,” posted, and, over time, several people have written to say they owned a Gleich—either to share the image, tell an anecdote about it, or to ask whether it had value. 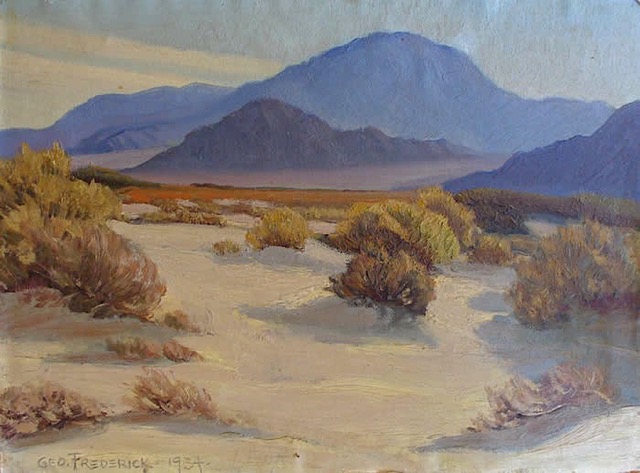 But a few months back, out of the blue, a bonanza!  Richard Adair, a retired university professor, was going through his now-deceased grandmother’s belongings and found two sketchbooks by an artist named George Gleich. 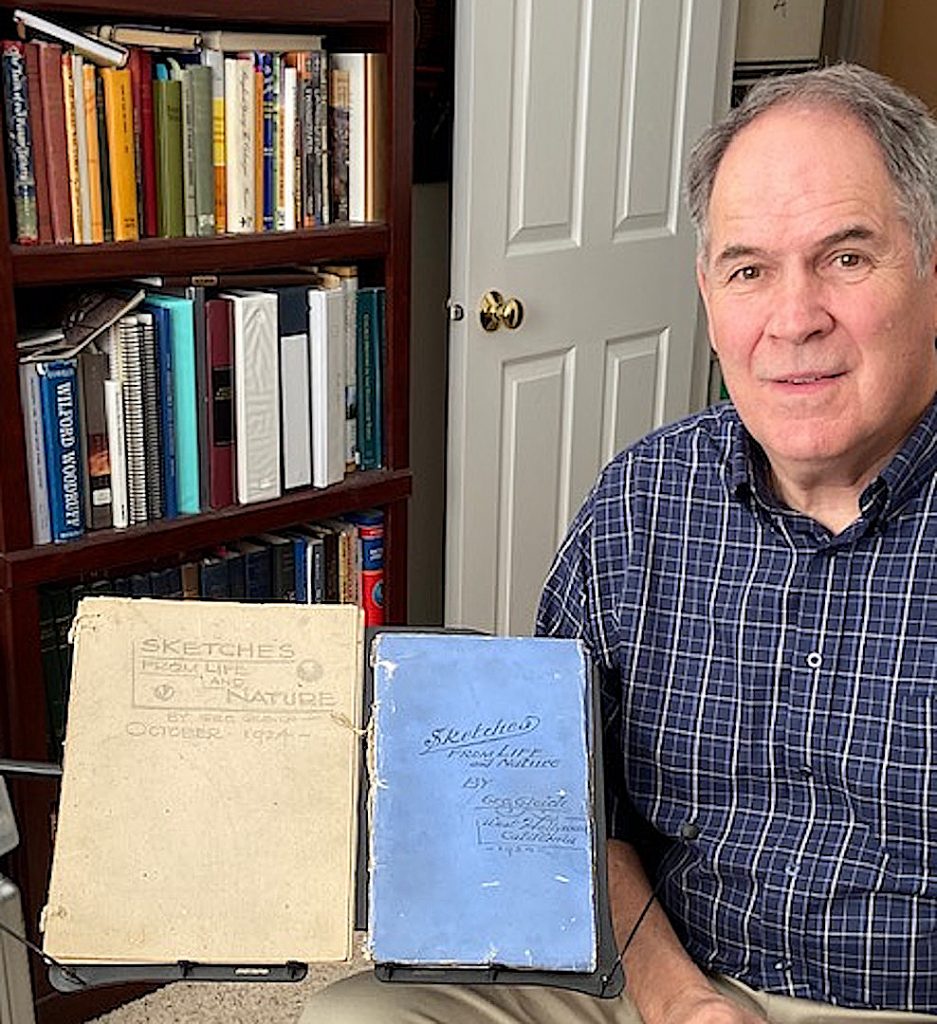 A Google search turned up the Desert Art website and my article about George Frederick, aka George Gleich, and Mr. Adair’s first question was whether or not these were his sketchbooks. One look at them confirmed for me that, yes, this was indeed the work of the one and same George Frederick Gleich.  Best of all, the books located George geographically in 1924—a gift, since his whereabouts in the mid-20s had eluded me so far in my research.

The sketchbooks, both titled “Sketches from Life and Nature,” cover a period of time between the first sketch on January 13, 1924, and the last sketch on November 19, 1924.  My prior George Frederick research had tracked him from his 1889 birth in Bamberg, Germany, to his 1911 migration to the United States, and to Keokuk, Iowa, where he lived, until heading west in 1923.  There was no further hint to his whereabouts until he, already described as a “desert artist,” cropped up in Long Beach, California, giving a lecture.  The 1930 census then placed him in Palm Springs.  George’s Arizona period began when he married in Yuma in 1934, maintained a studio in the Tucson area in the late 1930s, and, by 1940, moved to Mesa where he lived until his death in 1964. 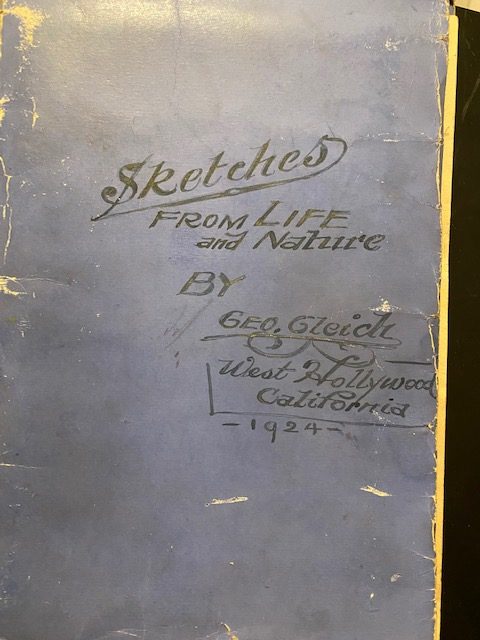 Sorting the sketchbook images by date places George Gleich in West Hollywood, California, in February 1924, in Illinois through most of October 1924, and back in California at Camp 13 in Fontana by November 1924.  Since George indicates that he drew most of his annotated sketches “from nature,” we can assume that he was physically in those places on those dates.

Gleich was boarding in West Hollywood, California, in the home of Mr. and Mrs. Bahne S. Andressen when he created the earlier book, ““Sketches from Life and Nature by George Gleich – West Hollywood, California.”  (He refers to Mrs. Andressen as his “landlady.”)  A little research revealed that, like George, Bahne “Barney” Andressen was a German immigrant who had arrived in the USA in 1873, married another German immigrant, and was living in Keokuk, Iowa, at the same time as George Gleich. 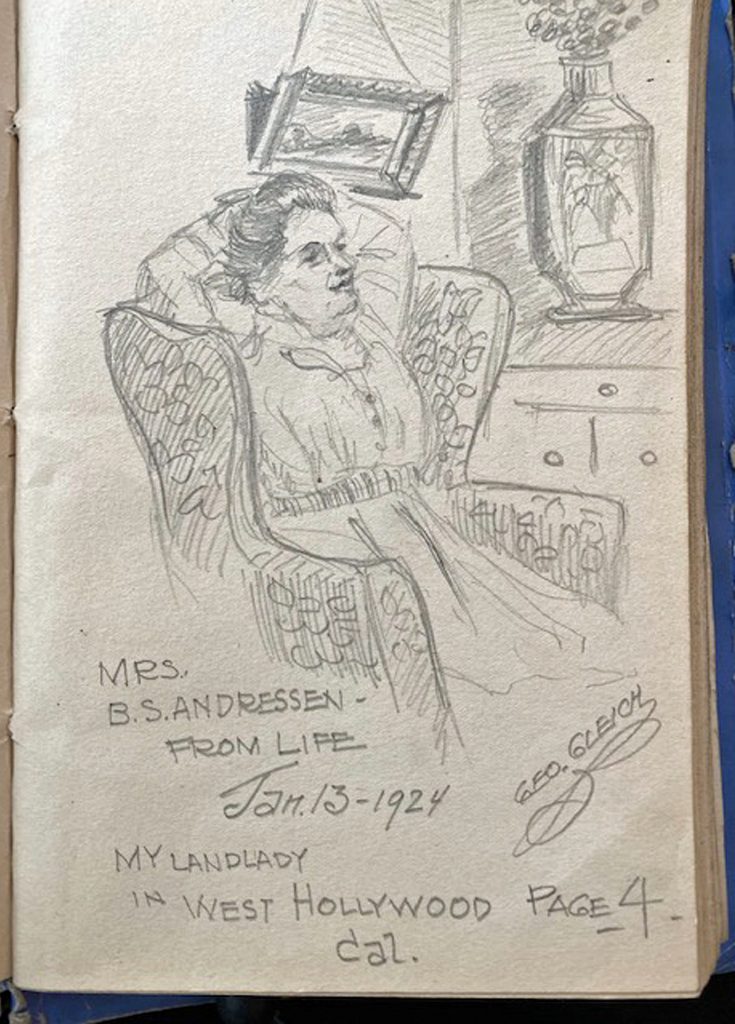 The Andressen’s youngest child, Mabel, according to her 1920 wedding announcement in the Keokuk Gate City Daily, attended the Los Angeles Bible Institute.  She met and married a Stanley Dodge in Los Angeles.   A 1922 Hollywood newspaper personals column notes that Mrs. Andressen was visiting her daughter, and by 1924 the Los Angeles City Directory lists Bahne S. Andressen at 8627 West Knoll Drive, West Hollywood.   Bahne Andressen in 1924 was around 70 years old and most likely retired from his traveling-salesman career.  So, my best guess is that around 1923 the Andressens had moved to California to be near their daughter and son-in-law, and by 1924 George Gleich wound up in West Hollywood, boarding with acquaintances from Keokuk, Iowa.

There are 42 pages in the West Hollywood sketchbook, the first dated January 13, 1924, and the last, February 18, 1924, with one page a detailed index of the sketchbook’s contents. 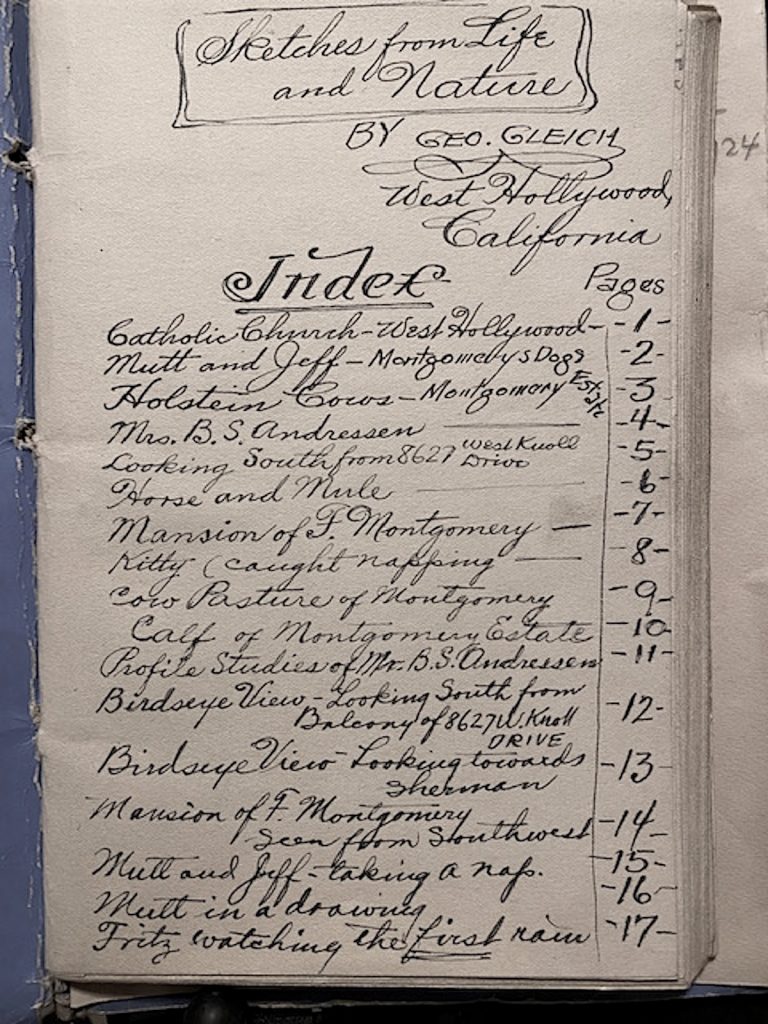 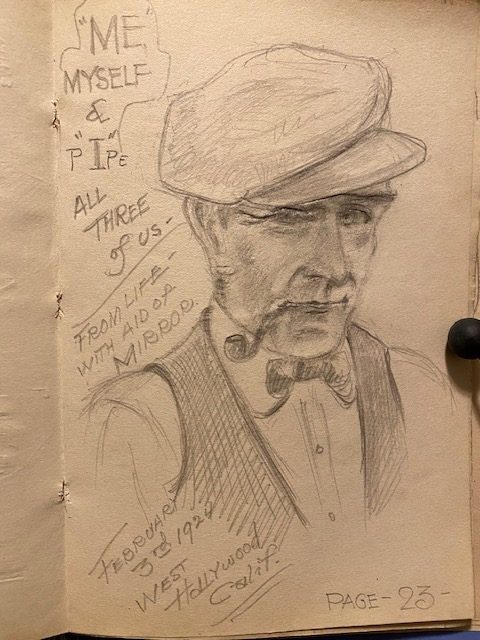 The city views are a wonderful look at the rural mid-20s California area that is now the glitzy Sunset Strip. The Catholic church George sketched, just north of his boarding house, was the old wood-framed St. Victor’s, built in 1906 to serve Mexican oil-field and railway workers.   A sketch made from the front porch of the Andressens’ house shows enormous oil fields, Catalina Island, the Pacific Ocean, and the famous concrete Heinz 57 emblazoned on a mountainside in Baldwin HIlls, advertising the Heinz Company’s 57 varieties of condiments. 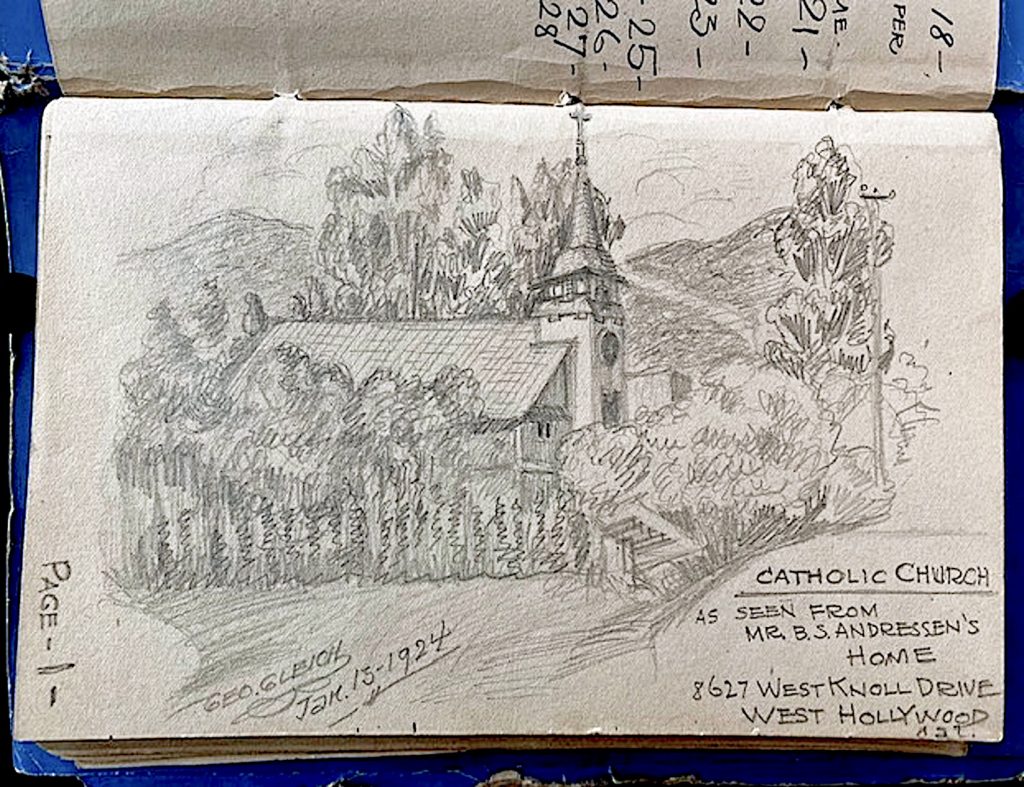 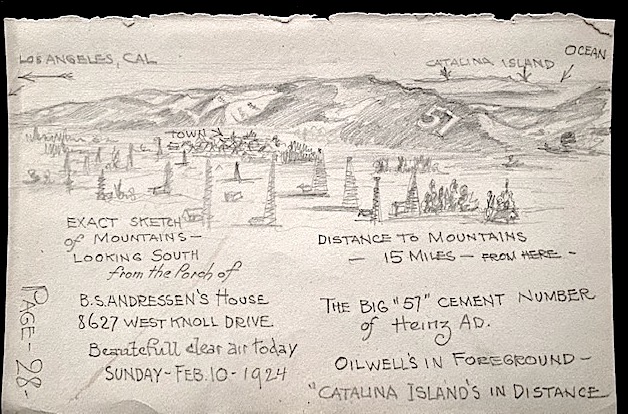 George also sketched a man named Fritz Lehman to whom he refers as “my sidekick at Montgomery’s”, the dogs of “F. Montgomery”, Holstein cows in Montgomery’s pasture,  and images of the Montgomery mansion. In 1912 Francis S. Montgomery had assumed management of his father-in-law Victor Ponet’s business interests and enormous 240-acre ranch in West Hollywood.  The Montgomery estate was located just north of the Andressen’s home on West Knoll St., and it’s possible that both George Gleich and sidekick Fritz Lehman were employed there and both boarding with the Andressens. The last sketch in the West Hollywood book is dated February 18, 1924, and the first sketch in the second book, October 3, 1924.  Wherever George was during these missing six months, we can be pretty sure there were sketches being made. 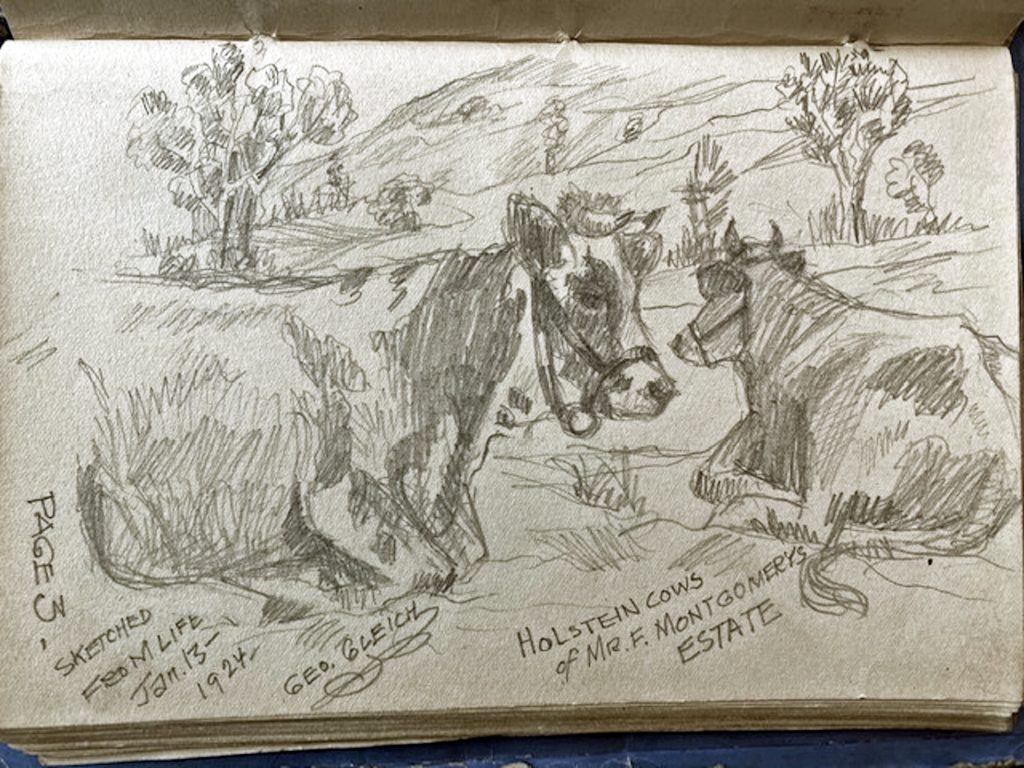 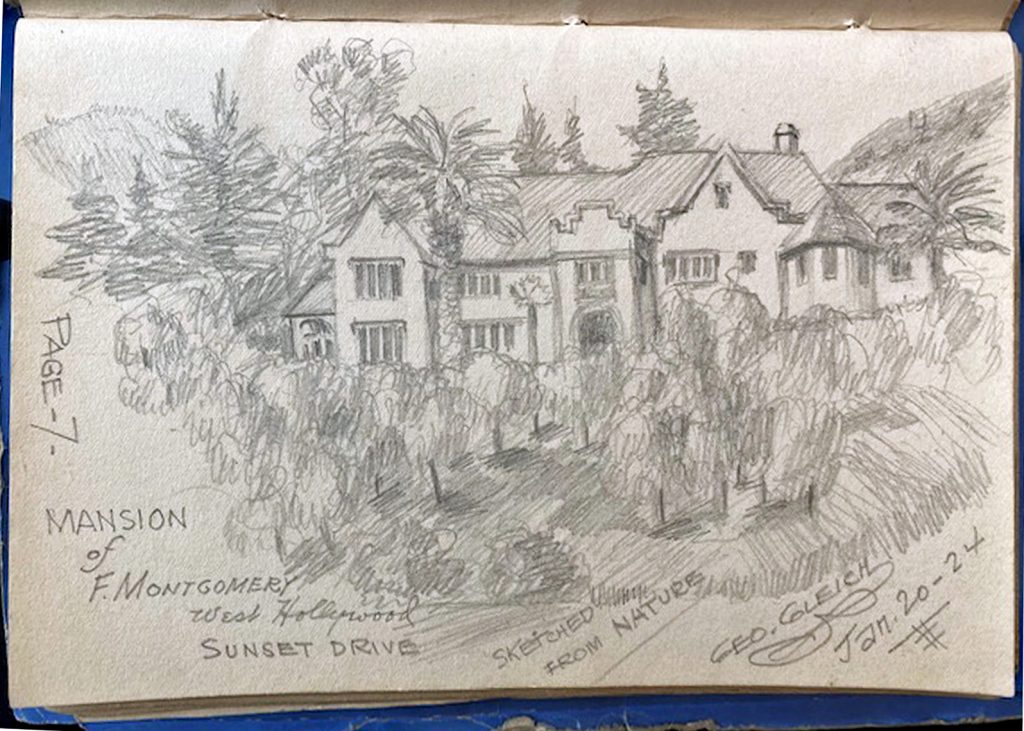 The drawings in Mr. Adair’s second book were made in Hamilton, Illinois, at the well-known, more-than-slightly funky art colony called Ivy Wild.  In my initial article about Gleich, I had conjectured that he had had some sort of contact with Ivy Wild since George had claimed to have accompanied George Upp, a fairly prominent artist associated with Ivy Wild, to Mexico on a portrait-painting jaunt.  Of course, George would have been familiar with the infamous Ivy Wild since Hamilton, Illinois, is just across the Mississippi River from Keokuk, Iowa.  However, sketchbook #2 does confirm that he had actually spent time at Ivy Wild and knew George Upp personally.  Gleich sketched there for at least two weeks, and his last Ivy Wild drawing is dated October 23rd. 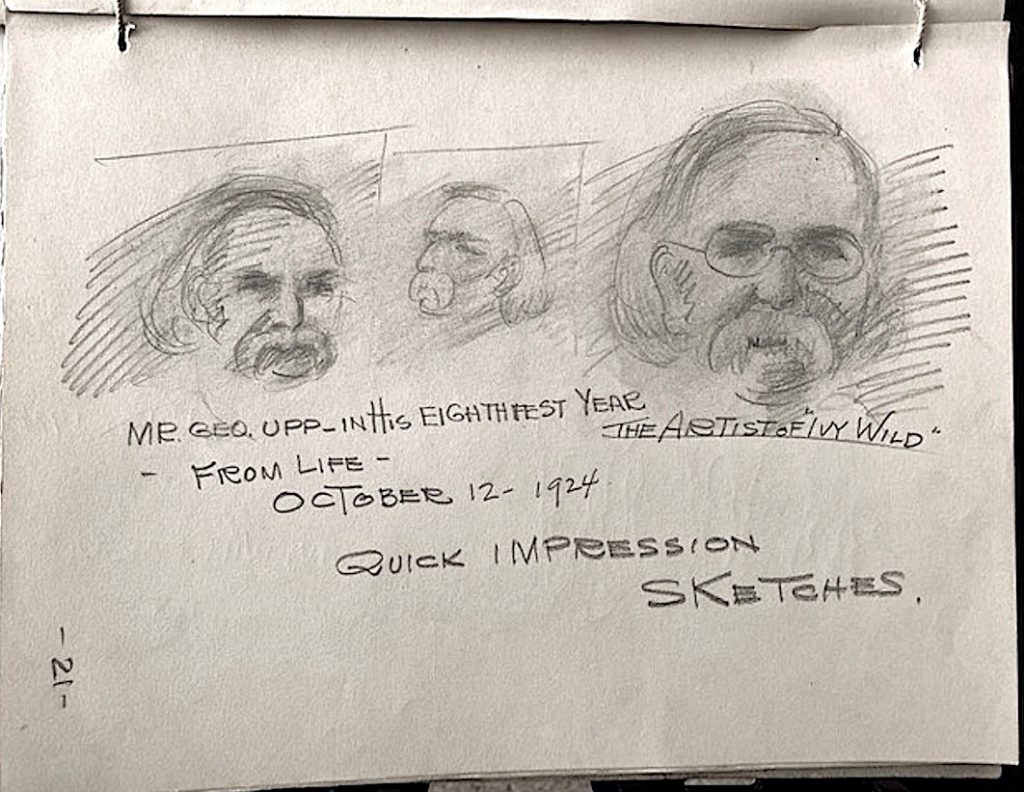 Ivy Wild was a 130-acre farm owned by artsy Augustus and Alice Green. The Greens’ son Harry shared his parents’ interests, and he is reported to have invited artist George Upp to visit Ivy Wild. Upp became the “man-who-came-to-dinner” and never left.  Harry also invited Edwin Johnston, a musician, poet, and avid gardener, to live there. (Augustus, Harry, George Upp, and Ed Johnston are all buried in the front yard at Ivy Wild where, every evening, Alice Green served Augustus a filled dinner plate, placing it on his gravestone.)  Russell Hiram Duncan, a young painter, also took up residence at Ivy Wild for years, and was sketched by George Gleich.  George also drew animals in Alice Green’s pastures—and their bones, her dogs, and many tree-covered landscapes.  He also dedicated one page of the sketchbook to a statement of composition rules spelled out in a beautiful calligraphic hand. 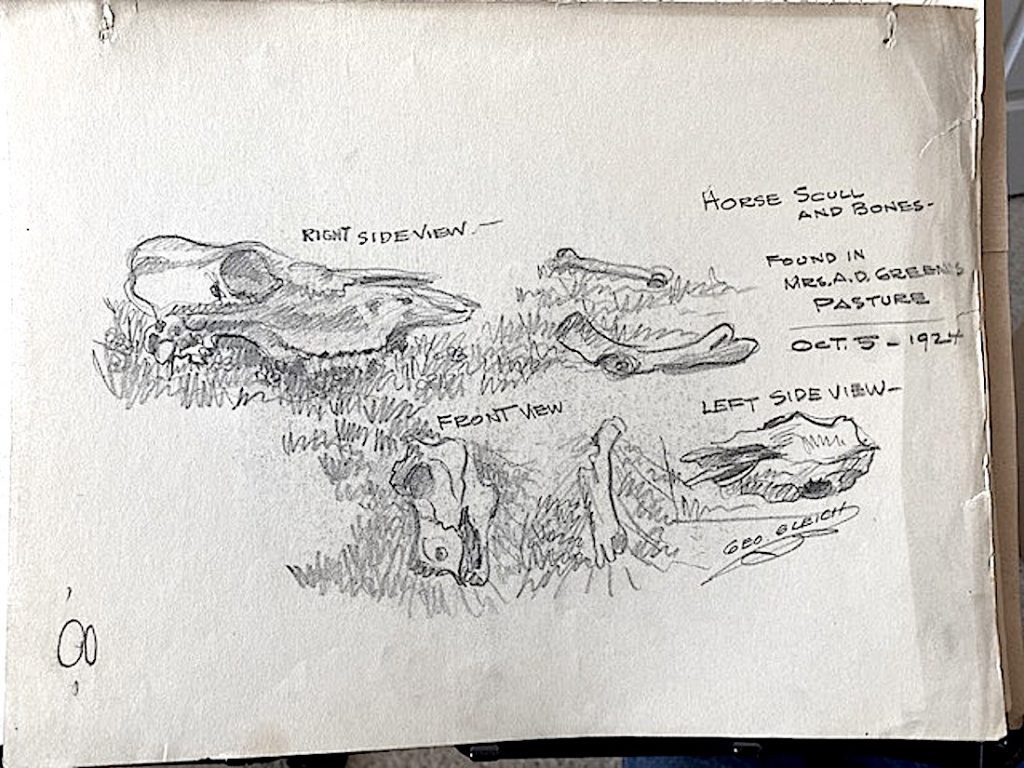 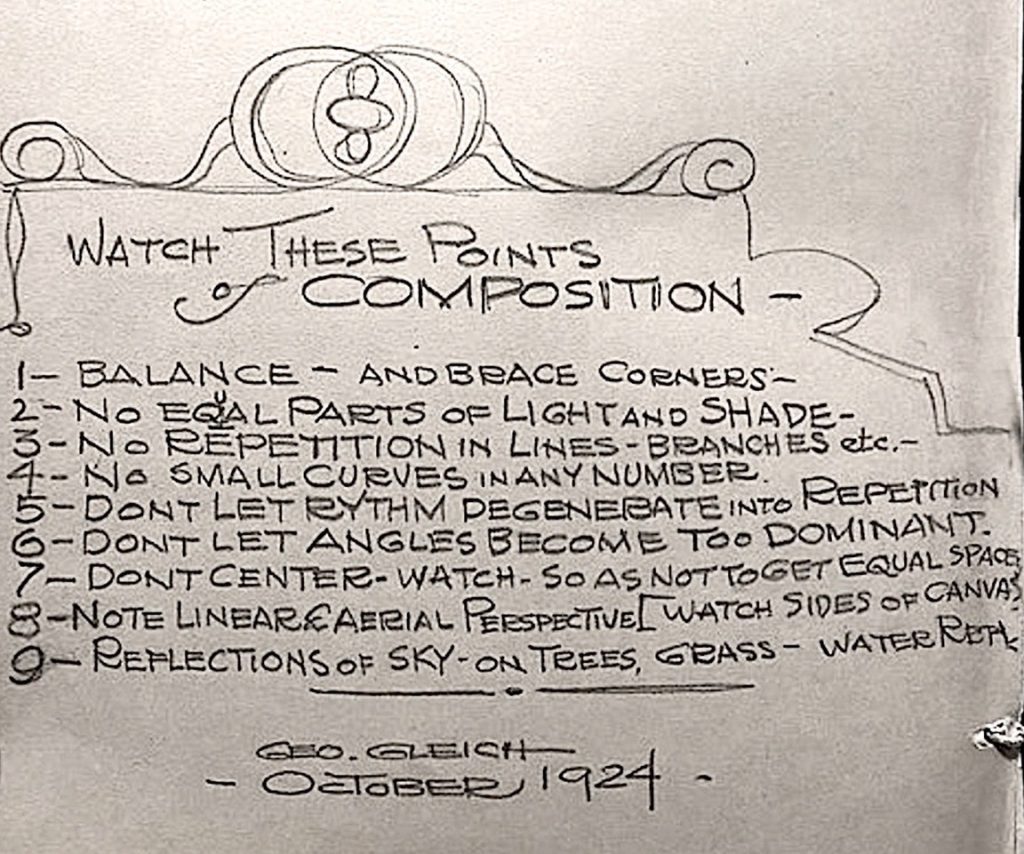 One of his images shows the location of the “last Mormon battle”, interesting because of Gleich’s later connection to the Adairs, descendants of a notable pioneer Mormon family.  That battle was part of the mid-19th century “Mormon War” between Mormons and non-Mormons, culminating in the death of Joseph Smith and the subsequent migration of the Latter Day Saints to Utah. 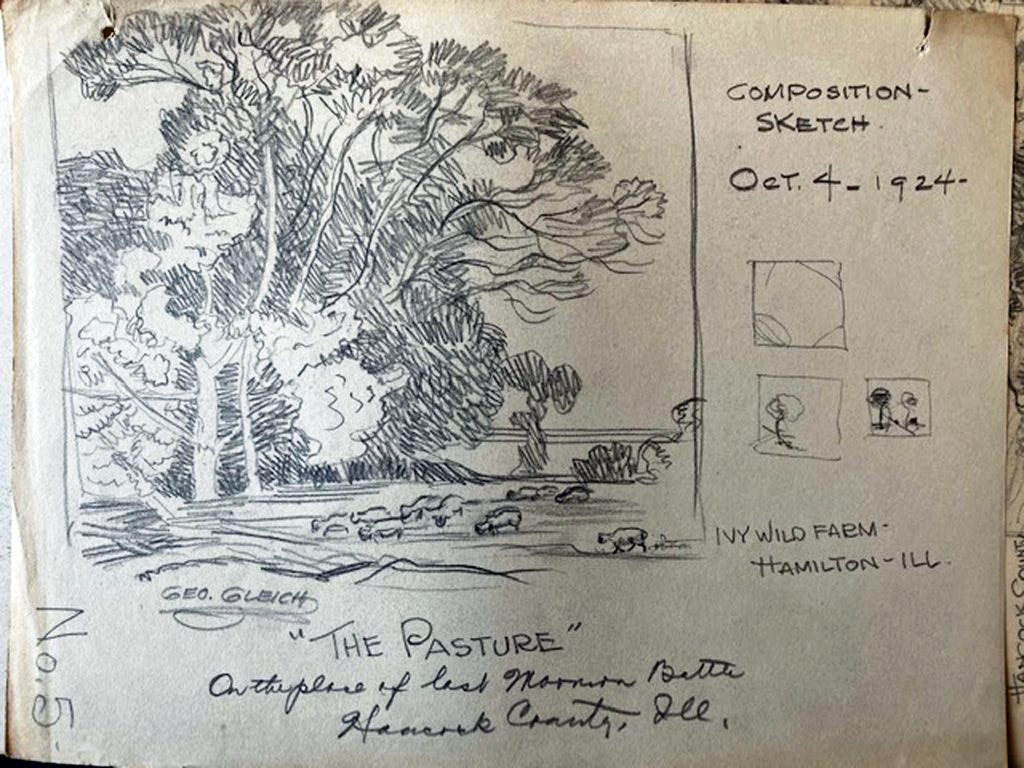 November finds George Gleich back in California—now in Fontana at Camp 13, probably a labor camp connected to the 17,000-acre Fontana Farm Company.  The Company was owned by A. B. Miller who had transformed a greasewood and sage plain into citrus orchards, hog farms, cattle ranches, and ultimately into the town of Fontana.  George Gleich may well have worked here, but we will never know whether he gifted his sketchbooks to the Adairs or left them behind and the family couldn’t bear to discard them.   Richard Adair described his grandparents Dagbert M. And Fiametta Smith Adair as “poor folks, transplants to California from southern Utah to find work. They were in Fontana for only a couple of years.”  However it seems that Dagbert had done well, having been hired for a managerial position at Fontana Farms.  The San Bernardino County Sun newspaper reported on January 30, 1924, that “Mr. and Mrs. B. M. Adair and three children will occupy Camp 13 while Mr. Adair will act as foreman to Unit 13.”   From November 9th to the 19th, George Gleich filled 28 pages with Camp 13 sketches. He drew the three Adair children, Smith, Adeline, and Virginia. 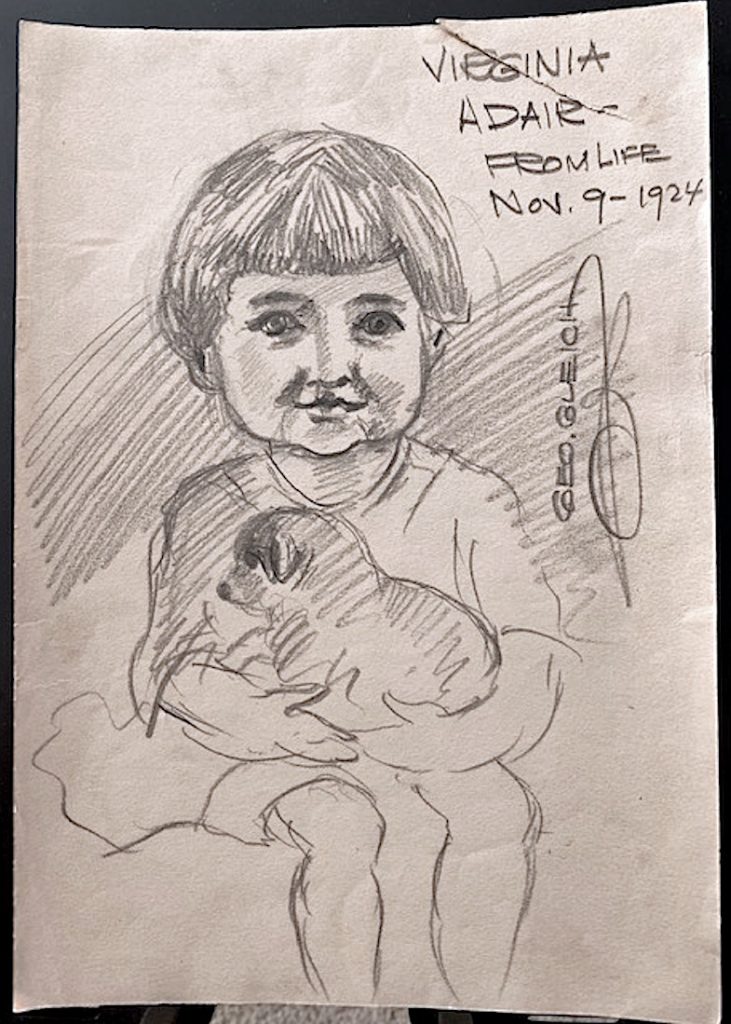 He drew camp mules, yet more dogs, and a be-speckled man named Berger, possibly a fellow worker, writing to his sweetheart by kerosene lamp-light. 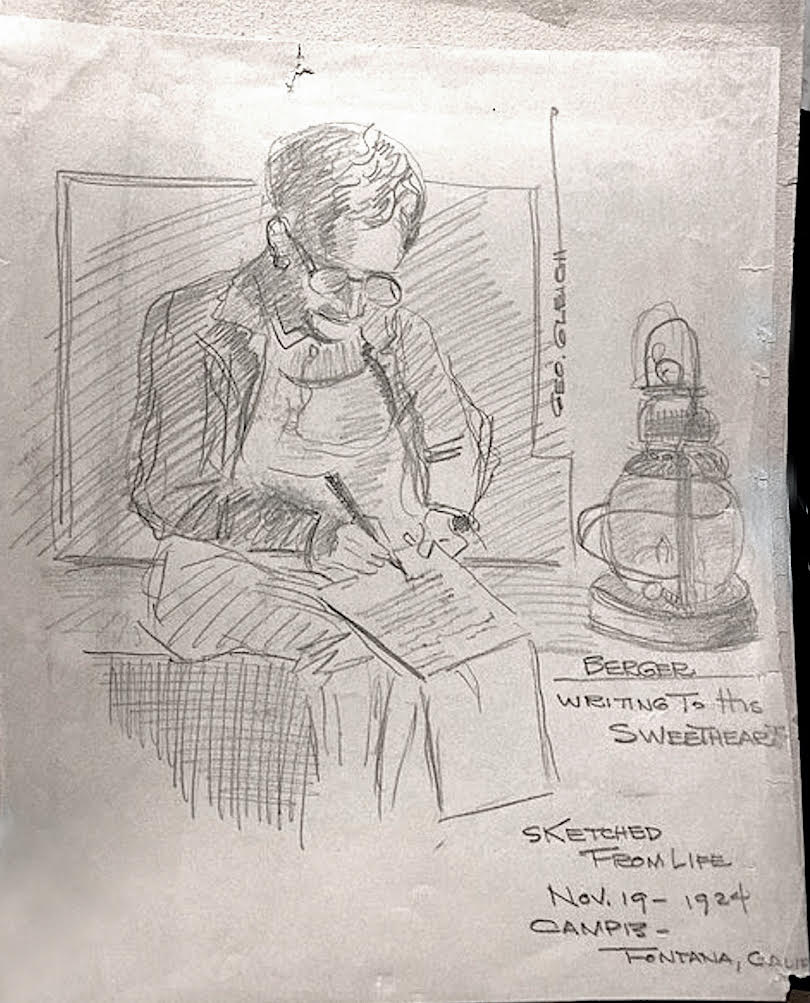 These two sketchbooks, so generously shared with us, have value beyond simply satisfying my curiosity about George’s location during the years for which I couldn’t account.  They also have significance as a contemporary look at West Hollywood, California, when Sunset Strip was grazed by cows and surrounded by oil fields.  And, for those interested in learning more about that surprisingly avant-garde Illinois artist commune called Ivy Wild, what a delight to see the faces of George Upp, Ed Johnston, and Russell Duncan.  The sketchbooks also provide a closer look at George Frederik Gleich as the self-taught artist attentive to his craft—two pages devoted to numbered lists of rules for himself: “Watch These Points of Composition.”

What fun this has been, tracing George’s well-illustrated footsteps back and forth across the country nearly one-hundred years ago.  My sincere thanks for this adventure go to Richard Adair who shared these sketchbooks that will soon have a permanent home at Brigham Young University and to the California Desert Art site that first published the intriguing story of George “Smoke Tree” Frederick Gleich,

Rebecca Ragan Akins:  A theatrical costume and puppet designer with over 130 shows to her credit, Akins has been involved for many years with arts education in Arizona–recently concluding a 21-year stint as Curator at the Arizona Museum for Youth.  The Tempe resident previously taught and was costumer/costume designer at the University of Denver Theatre Department. In 1985 Akins received the Arizona Women’s Partnership Governor’s Award for “Women Who Create,” and her own artwork has appeared in many galleries and exhibitions.  Over the years she has received many AriZoni Theatre Awards for Excellence in Costume Design. Akins is active in the local arts community — guest-jurying exhibits, moderating arts panels, and serving on the boards of the Central Museum Association of Arizona, the Museum Association of Arizona [MAA], the New School for the Arts & Academics, the Executive Board of the Tempe Municipal Arts Commission, and the Daniel Nagrin Theatre, Dance & Film Foundation.

After having spent quality time poking and prodding at George Frederick, Akins has developed a keen interest in the artists of the desert southwest—those intrepid souls who willingly sacrificed security and comfort to follow their bliss. Akins can be reached at rrakins@cox.net. 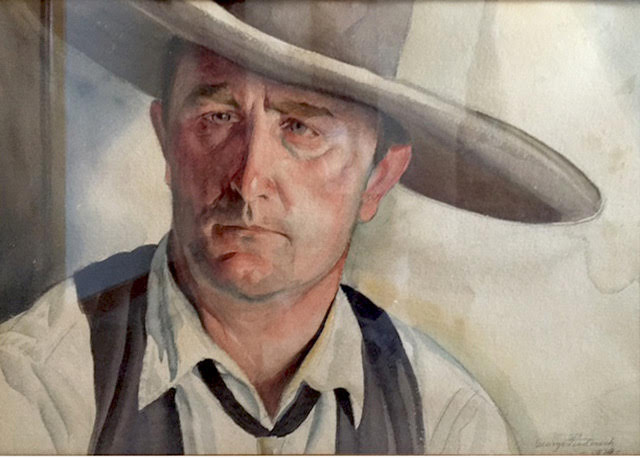 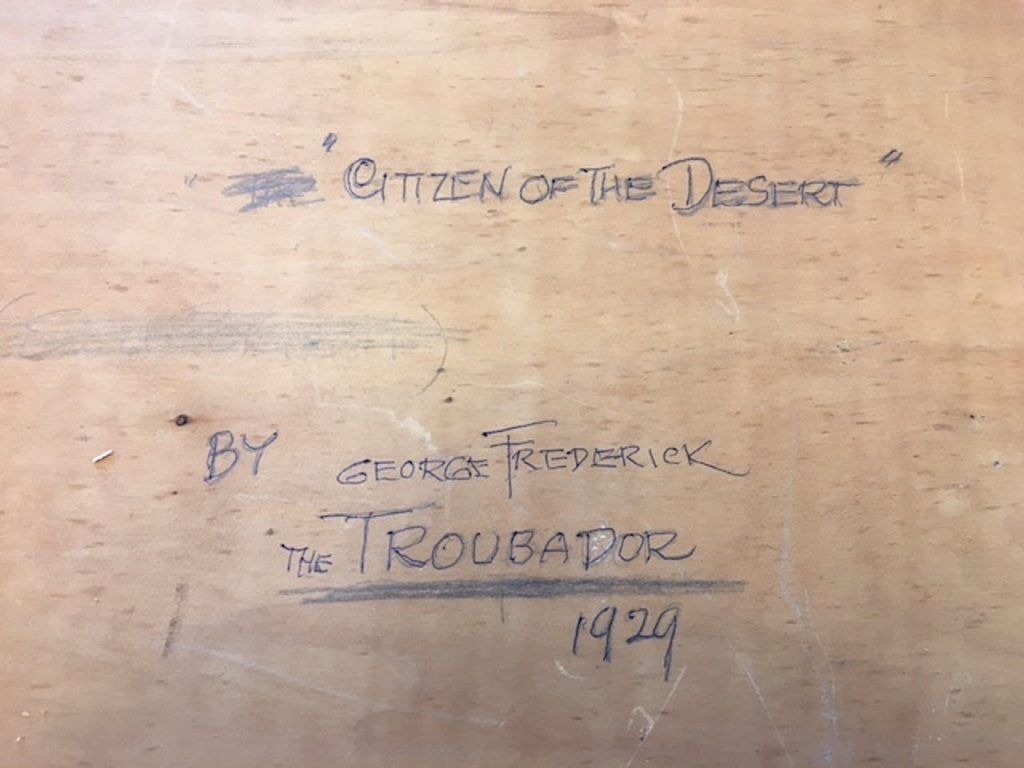 Note on back of the self-portrait.

9 comments for “Out of the Blue! George Frederick Gleich’s 1924 “Sketches from Life and Nature””