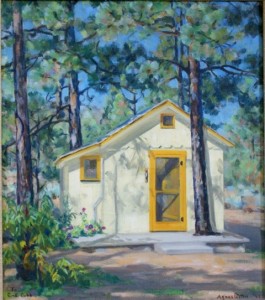 Agnes Pelton's painting of her cabin on Thomas Mountain

Mount San Jacinto, above Palm Springs, played a big role in Agnes Pelton’s life and vision. From the porch of her little house in Cathedral City the artist studied and painted the peak, a symbol to her of upward yearnings. At age 60, she moved physically closer to the mountain when she purchased a get-away cabin in the village of Thomas Mountain. For those of you who drive Highway 74 from the desert to Idyllwild, Thomas Mountain is the cluster of cabins on your left as you cross the open “Bonanza”-like plain through Garner Valley.

Until now Pelton scholars have not known the location of the cabin, but the mystery began to crack when Cathedral City’s first mayor, Robert Hillery, shared his memories with California Desert Art. He said the cabin was built by Claude and Edna Cobb (owners of the first market in Cathedral City) and sold by them to Pelton. The house was near the old water tank at the top of  Barbara Lee Drive in Thomas Mountain Village.

Now, adding further impetus to the cabin-hunt, CDA has received an e-mail from Linda and Kirk Edgar of Long Beach, who just purchased a rare Pelton painting of the cabin itself. They bought it from a friend who said the work hung on his wall for five years in a simple wooden frame painted grey.

The Edgars’ first love is early regional California and American art; they had no attraction to abstraction until they saw a Pelton show at Pepperdine University in Malibu. Linda has been thinking about why Pelton’s abstracts speak to her: “It is the same feeling I get when I see something in nature,” she writes. “It is like when you go through that tunnel in Yosemite and come out into the valley for the first time. Pelton has captured that essence in her work.”

The Edgars dream of someday owning a Pelton masterpiece. (If Linda won the lottery, she says, that’s what she’d do with the dough). Meanwhile, they revel in the cabin painting along with a small Pelton desert scene with a taste of infinity about it. “I think it has the fourth dimension that has been written about her work,” Linda Edgar says. Their landscape, “Desert Glow”, appeared in the recent show at the Orange County Museum of Art and also in the catalogue: “Illumination: The Paintings of Georgia O’Keeffe, Agnes Pelton, Agnes Martin and Florence Miller Pierce.”

Below is Linda Edgar’s original e-mail describing the cabin painting. Does the actual cabin still stand? Stay tuned to CDA for a report on the expedition to find Agnes Pelton’s cabin. 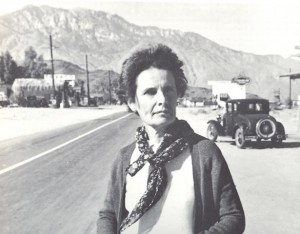 Agnes Pelton in front of Cobb's market on Highway 111 in Cathedral City, 1932. Behind her is Mount San Jacinto.

We own a painting by Agnes of a small cabin in the woods. The cabin is painted a creamy yellow with a screen door and small window trimmed in October yellow. The inside door is slightly open, giving you a hint of what is inside. The pines around the house include rich blue and purple tones. On the front left hand lower corner it states “To C. + E. Cobb”. It is signed by Agnes Pelton and dated ‘42.

Your article has answered many questions that we never thought could be answered. I can now guess that she painted it for her friends Claude and Edna Cobb, a portrait of a humble place they all loved. Your documentation of a glimmer of time has given this painting for me a new connection to Agnes, of her life and joys. I can imagine her waving with her bag of paints in one hand as her friend Hillery’s dad drives away. I found additional information about the cabin on page 94 and 122 in “Agnes Pelton: Poet of Nature”. I can only imagine the skies and flora she studied around her cabin that are still reflected in her work today. A cool place to stay in the summer to hike, read, reflect and paint.

I hope one day that we can drive up Thomas Mountain and find that cabin and like you get a rush of Agnes Pelton energy.