When Lydia Sohlberg Deere took her sketch pad down to Palm Canyon in the 1920s, she was a mature woman with a career in hat making behind her. Born in 1873, she operated a millinery shop with her twin sisters and taught Scandinavian handiwork at Swedish Lutheran Bethany College. Swedish was spoken in her small Kansas town; even the newspaper was in Swedish. 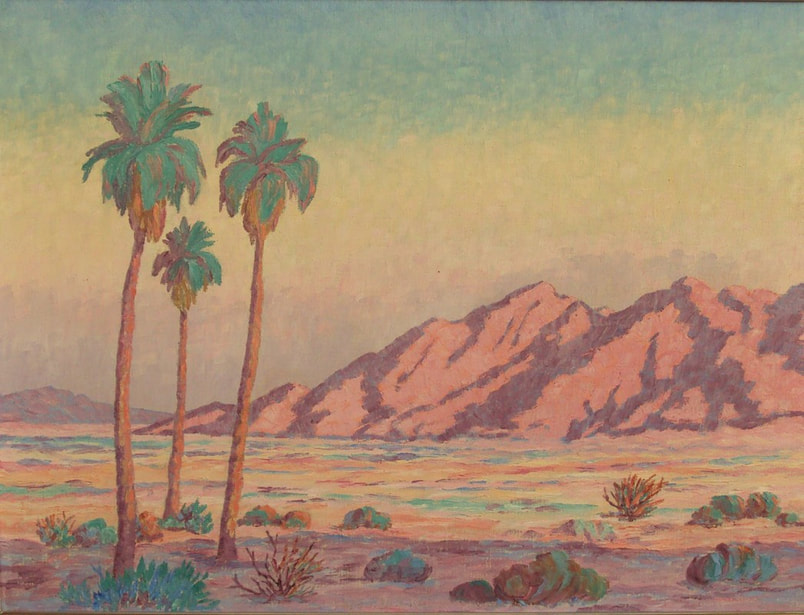 Despite her planted roots, she yearned toward the blocky outcrops and vibrating colors of the desert—a pull encouraged by her art teacher, the celebrated landscape modernist Birger Sandzén. There was just something in the terrain and ethos of Lindsborg that turned people West.

I was first smitten with Lindsborg, Kansas, when researching the Sven-Ska rebel, Christina Lillian (1888-1976). The tidy burg somehow produced the radical visionary who became friends with Agnes Pelton and founded the Sven-Ska artists’ colony in Cathedral City. It seemed to me Lindsborg contained the best of all worlds: Tradition and liberation. 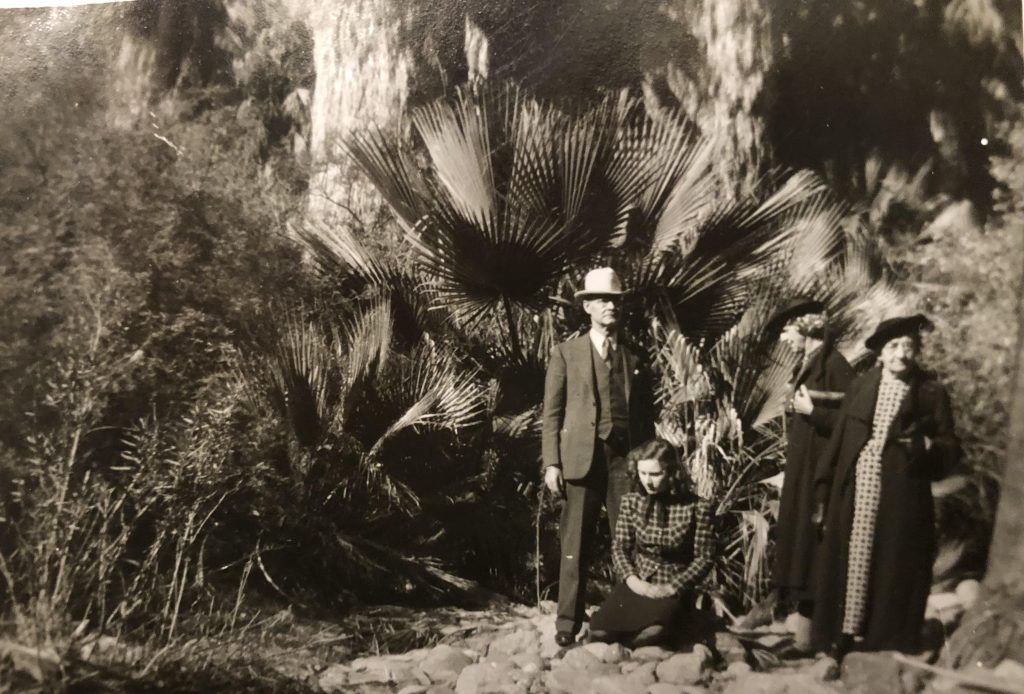 Christina was such a find that I could hardly believe there was another Lindsborg woman wandering around the Indian Canyons in the 1920s. Everything I now know about Lindsborg Visionary # 2 is thanks to Fran Cochran, a great grand-niece of Lydia Sohlberg Deere (1873-1943). The Menlo Park resident maintains an extensive website about her Swedish kin. She supplied the images you see here.

I’d like to tell you that Lydia Sohlberg Deere and Christina Lillian (who was 15 years younger) knew each other, perhaps sharing a canteen on sketch trips to Mt. San Jacinto. While that is chronologically possible–and it seems almost impossible that they didn’t know of each other–there is so far no evidence that one followed the other to Palm Springs or that they connected here.

Lydia (I’ll call her by her first name) got her artistic start as a photographer soon after the first Kodak camera was released in 1888. She outfitted herself with gear and began taking pictures of her family and friends. From there she expanded to documenting life in her small Kansas town. Like Susie and Lula of the Postcards from Mecca book, she was a self-appointed documentarian of home. 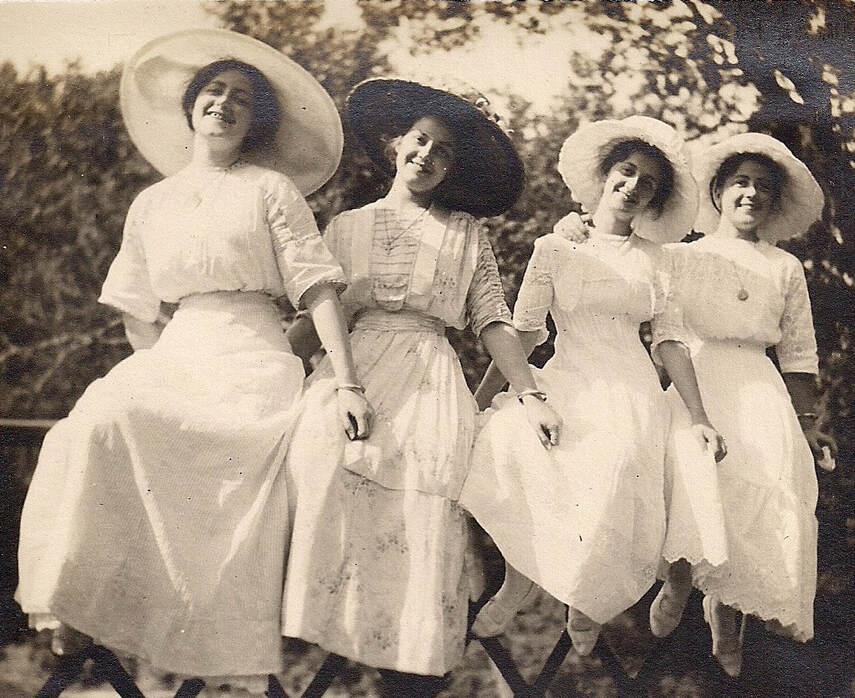 In 1906, Lydia became Dean of Women and Matron of the Lane Hart Women’s Dorm at Bethany College, which still operates today. She taught Scandinavian handiwork–teaching girls to embroider for hope chests–at Bethany. This Swedish skill set was something she had in common with Christina Lillian, who also was a seamstress and made costumes in Hollywood when she came West.

Both women were well-schooled in ladylike attributes. “Sit in erect position, never resting any part of arm on table,” Lydia wrote in her sewing instructions. 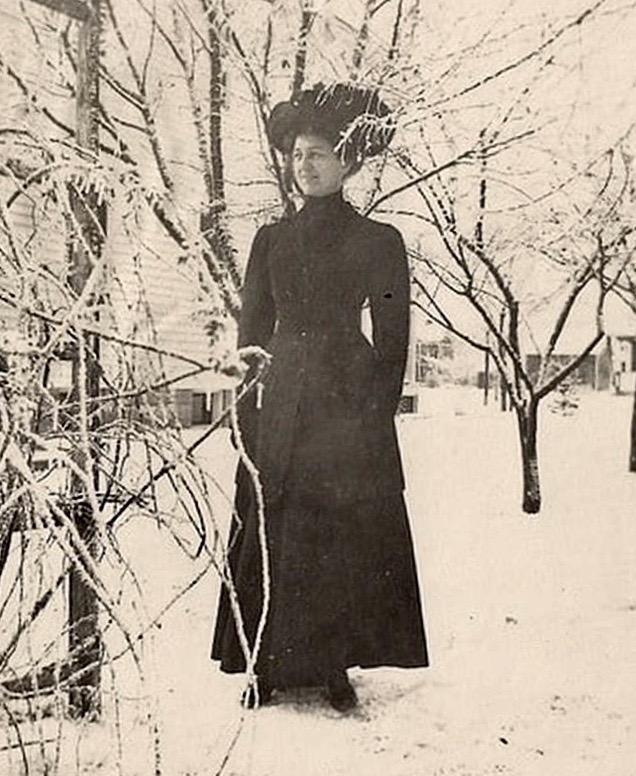 When Lydia was 43, she married Emil O. Deere, a science professor and administrator at Bethany College. The marriage cemented her role as a pillar of the town. The couple began to make trips West, following waterways and hunting for agates. “Please bear in mind that Emil is a geologist, which fact determines the course of most all our travels,” Lydia wrote in a letter home.

Lydia was learning to read the landscape on these driving trips. Her early black and white photos of central Kansas show a definite feeling for bare, bold terrain.

She had long known Swedish painter Birger Sandzén, who came to Lindsborg fresh from his Paris studies in 1894. But it wasn’t until Lydia was 46 that she actively pursued painting, taking classes with Sandzén at the college. The instructor was known for his Van Gogh-like landscapes of the Rocky Mountains, and Lydia was likely encouraged by him to sketch and paint in the West. 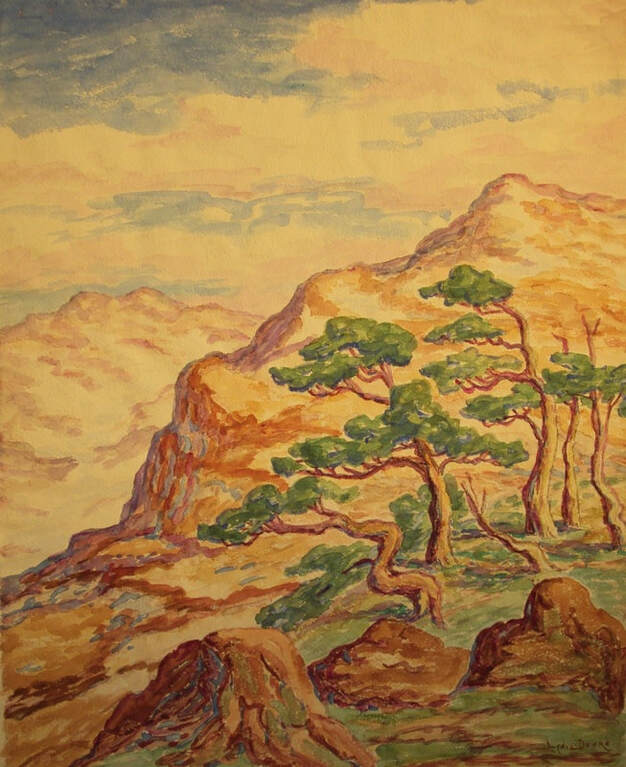 The art historian William H. Gerdts once said Sandzén was “a significant figure in the development of Modernism,” aligning him with Arthur Dove, John Marin, Marsden Hartley and other modernist painters. “Isolation in the American heartland” might have inhibited his fame, Gerdts speculated. We might ultimately say the same of Lydia.

Both Sandzén—and later Lydia–painted the grain stacks outside Lindsborg, in a nod to Claude Monet. Both explored the Smoky Hill country and the Smoky Bluffs outside town, following the footsteps of the Spanish explorer Francisco Vasquez de Coronado. (Few Western history fans know that Coronado traversed Kansas in 1542.) The sandstone bluffs primed the painters for the desert arroyos they’d later encounter. 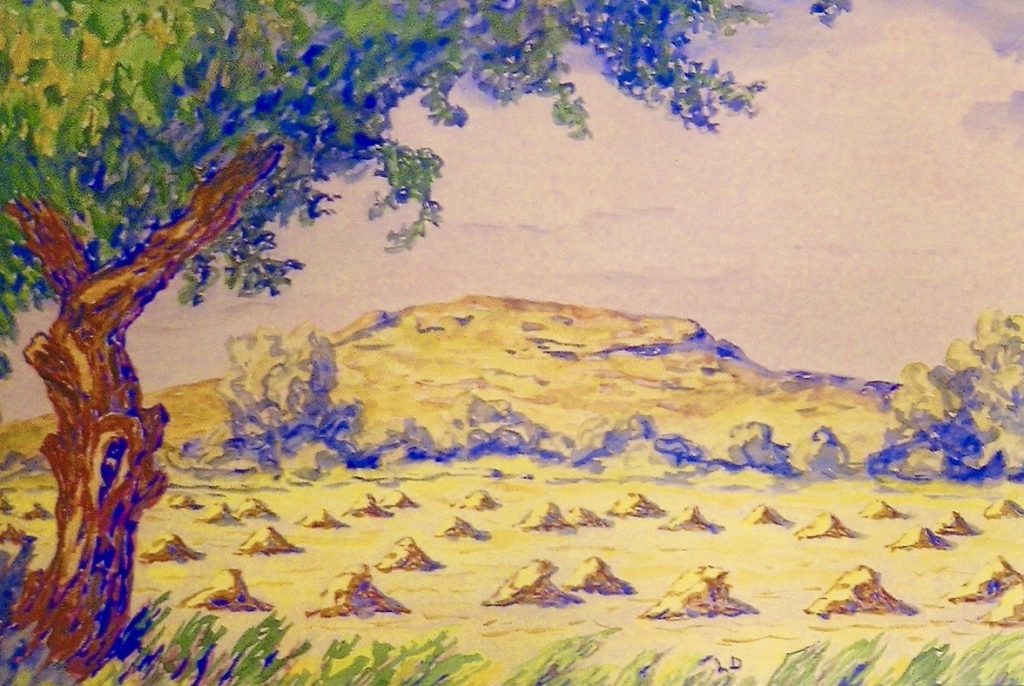 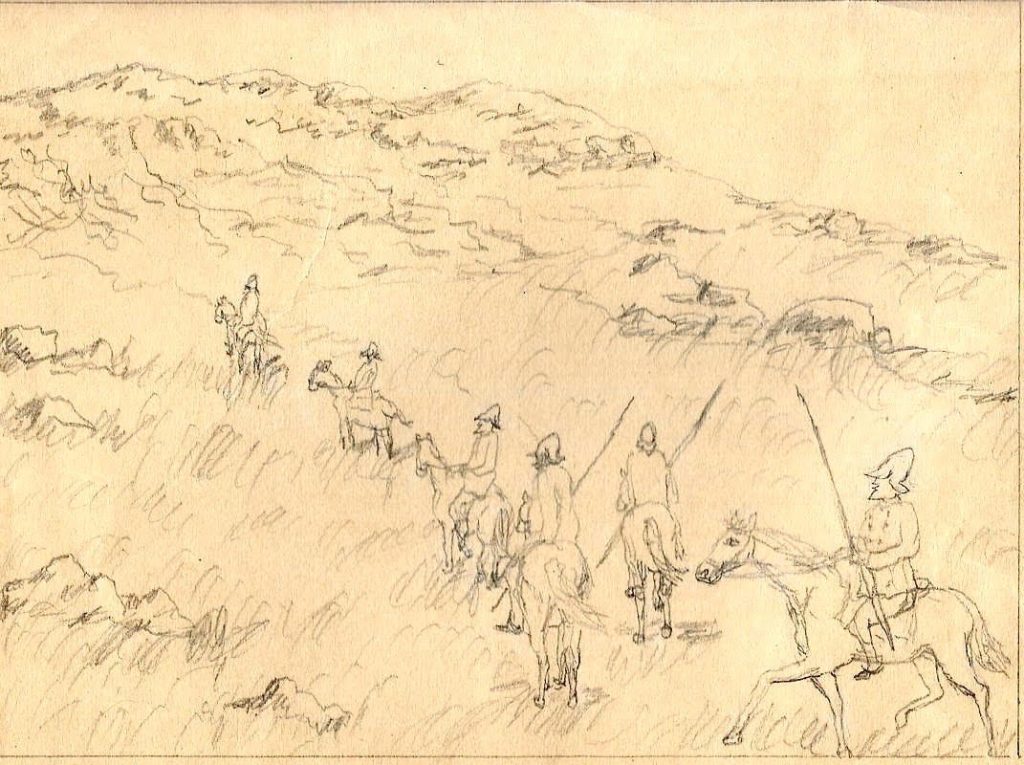 Westward Sandzén went; and westward followed his student. Lydia made sketchbooks on her travels in Colorado, Wyoming, Utah, Arizona and New Mexico. She became a member of the Prairie Water Color Painters, showing her work alongside Sandzén and his other students.

Lydia often visited her sister, Selma, in Santa Monica, venturing out to the desert to sketch and paint. The California desert was a ritual testing ground for early landscape painters and Lydia made several trips to the Coachella Valley: Point Happy, Mt. San Jacinto, the Indian Canyons. 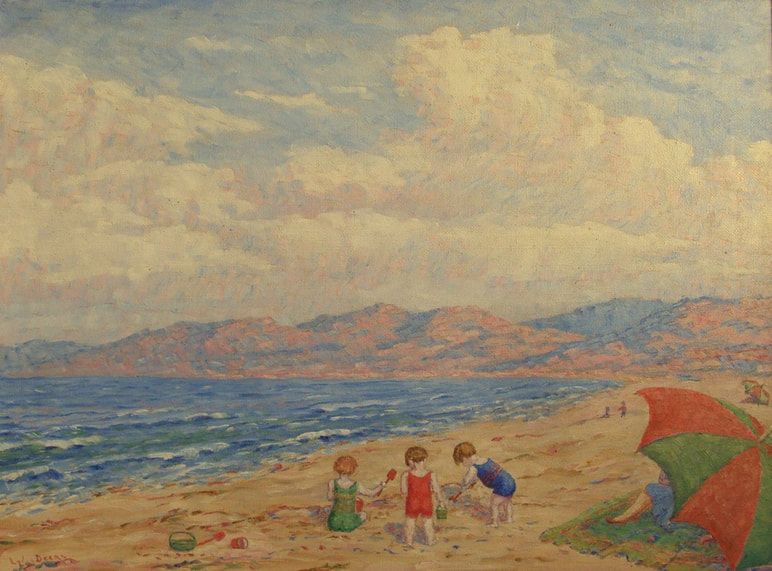 As Lydia sketched in the sun in a desert canyon, I have to wonder if she ever contemplated staying—as Christina Lillian had done. What was she thinking as she surveyed this exotic land? Could she abandon her rule-laden life—”never work without a thimble”—and break from generations of tradition? She was clearly on fire for the desert, but she had so many ties and duties in Kansas. 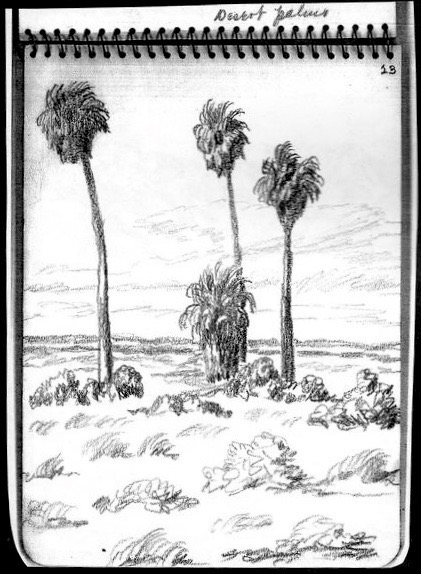 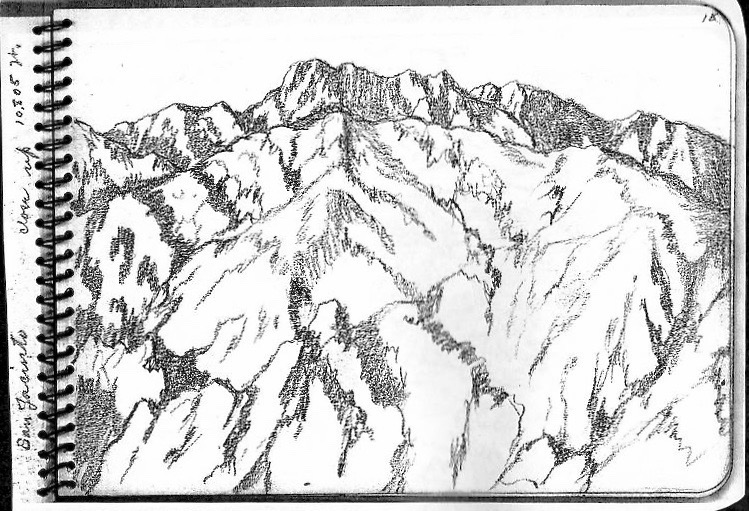 “Although Lydia was an artist and an independent woman in many areas of her life, she was also married, a homemaker, a church member, and very connected to her siblings, to the college and to the community,” says Fran Cochran. In other words, Lydia had to return to Kansas.

Lydia Deere died in 1943, Emil Deere in 1966. Much of Lydia’s art was then given away and sold in two major auctions. It was 75 years after Lydia’s death that Fran Cochran and her sister, Melinda Cochran O’Leary, donated most of the artist’s archives to the Birger Sandzén Memorial Gallery in Lindsborg. Only a few of her desert and Western paintings have surfaced but there are likely more hidden away in the home galleries of longtime Lindsborg residents.

A small collection of Lydia’s photographs were exhibited at the Sandzén Memorial Gallery in 2005. There followed a series of exhibitions around Lindsborg, including a showing of all 130 photographs at a Main Street Gallery. The 2011 show was titled: Lydia’s World: Early 20th Century Hidden Art and Photography of Lindsborg’s Lydia Sohlberg Deere. 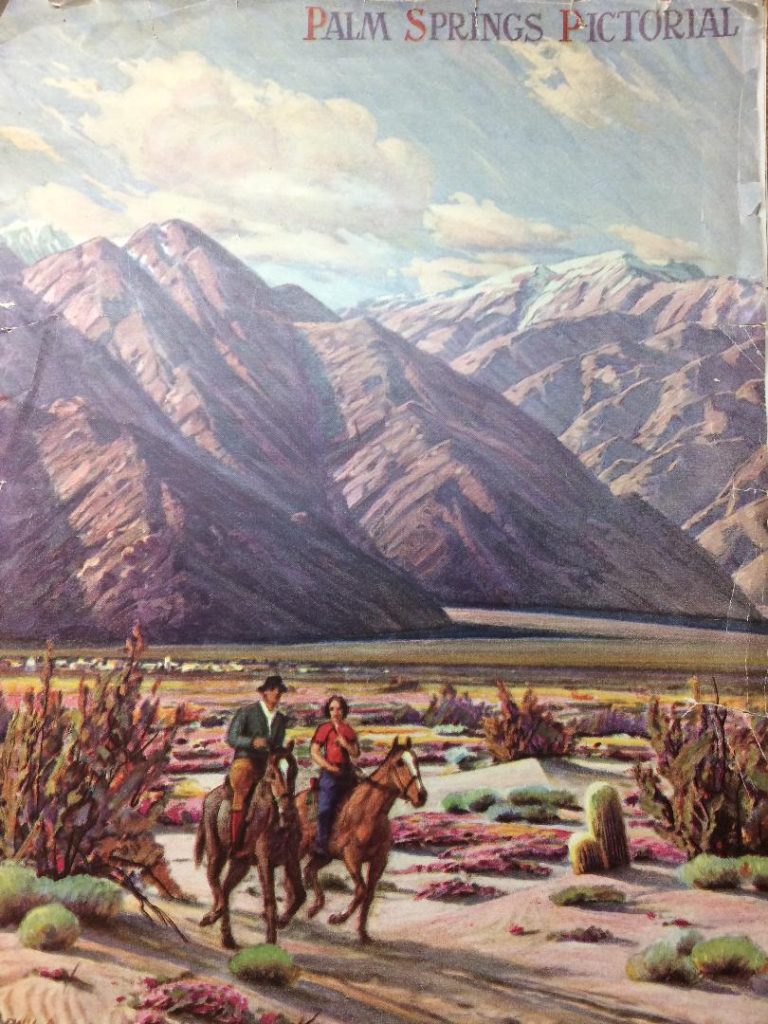 Lydia Sohlberg Deere brought this Palm Springs Pictorial home with her. She admired the cover painting by Harry Wagoner.

The story of Lydia Sohlberg Deere is one of those “what if” tales of forgotten women artists. What if Lydia came to painting earlier in her life? What if she lived in Santa Fe and not Kansas? Would she be known beyond Lindsborg?

While her later life was more conventional than Christina Lillian’s, the two women are sewn of the same Lindsborg cloth. Christina didn’t leave Lindsborg behind; she always stayed close to relatives there. And when Lydia returned east, she brought with her a Palm Springs Pictorial from 1938 as well as Palm Springs scenes on postcards. Studying the printed images, she was able to continue painting the desert long after snow covered the prairie. 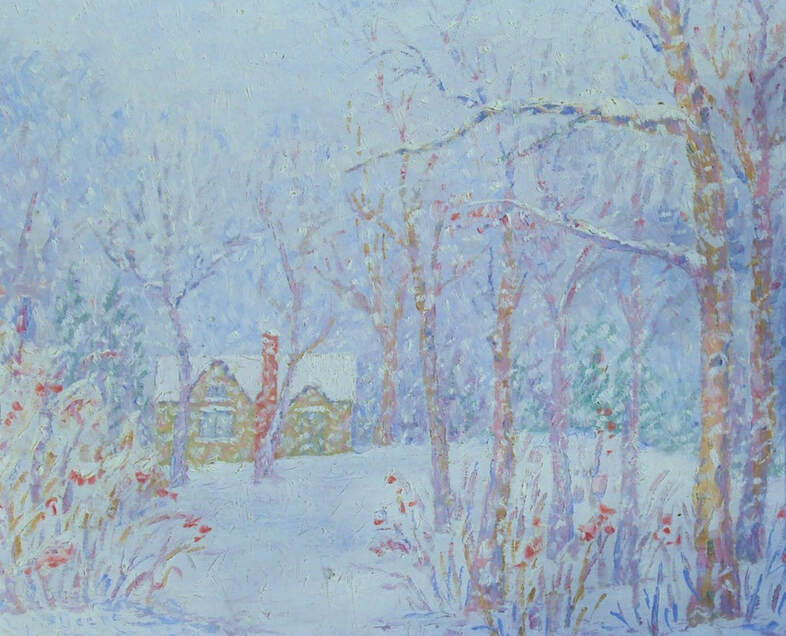 For more on another product of Lindsborg, Emma Christina Lillian, see: https://www.californiadesertart.com/the-lost-colony-of-sven-ska-christina-lillian-and-the-cathedral-city-artists/