There’s a new name in the pantheon of mapmaker artists. Joining a distinguished line-up that includes Desert magazine’s Norton Allen, Obi Kaufmann is a poet-artist-adventurer who set out to inhale the entire state of California by hiking, camping, dreaming, painting and drawing maps. 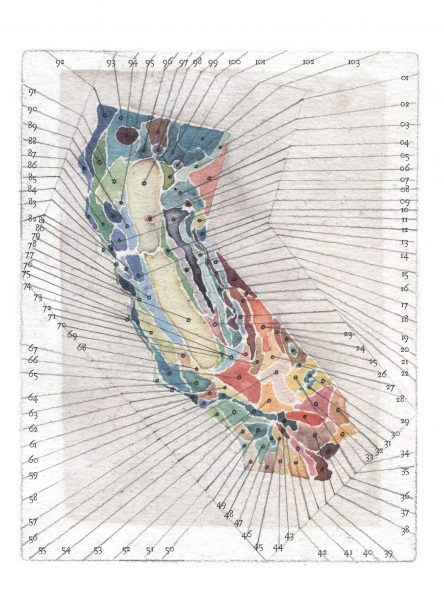 His mammoth compendium, The California Field Atlas (released this month from Heyday books), combines more than 300 hand-painted maps with watercolor paintings of mountains and wildlife. Obi will be signing books at the Borrego Art Institute on September 14th, 2017. His artwork from the chapter Of Life, Death and the Desert will be on display at the gallery through October 8, 2017.

The Oakland resident says he loves California like “an infatuated child”. His book is a highly idiosyncratic exploration of that love as well as the mapmaker’s art. These are not maps in the usual navigational sense, but instead a mythic cartography shot through with paganism. The Atlas is built on the assumption that every natural feature of California is alive and that there’s power in reciting place names: Mojave, Tehachapi, Borrego… 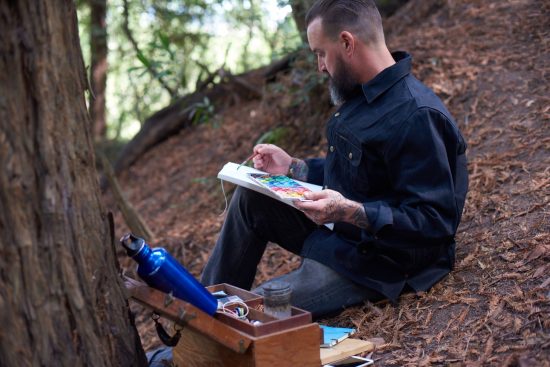 You’ll find familiar features here such as Old Grayback (San Gorgonio), the Colorado River, the Santa Rosas and San Jacintos as well as Joshua Tree, Death Valley and the Mojave–all braided into an epic visual narrative of California’s landscape. In these excerpts from the introduction, Obi explains his mission:

This is a love story.

California is the land where I was born and where, having spent a happy life walking through its forests and sleeping out under its stars, I hope to someday die, far off trail under some unnamed sequoia. My spirit is of this place, and to sing of its living spirit is to sing the most interesting song I’ve ever heard. Although I understand California’s puzzle-like personality as well as I have ever understood anything, I still feel like a novice—an infatuated child, a lost and humble beggar asking for its natural wisdom. I want to hold the whole of California in my hand, like a diamond or a spinning top; I want to coax this single piece of the universe into opening up its secrets. By writing this book, I seek to participate in the wild reimagining of this place, past the scars inflicted over the past 200 years, to reveal a story about what has always been here and what will remain long after our human residency here is through. I am a poet and a painter, and my work is based on a mode of naturalist interpretation that builds from hard science to focus the inner lens of truth. With the publication of The California Field Atlas, I present a new portfolio of invented geography that balances ecology and aesthetics as driving and orienting forces.

I have been working on this book my whole life. Many of these maps were sketched ten years ago on scraps of paper and have changed little since, while some have gone through ten versions in the last six weeks. 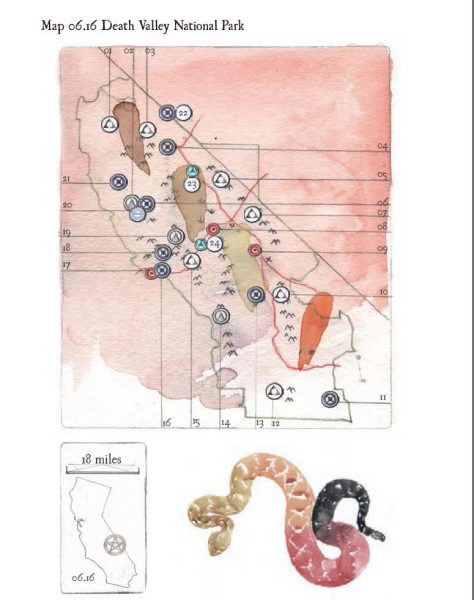 The California Field Atlas is organized into ten chapters that move through time, element by element, in a reimagining of California as a heroic capsule, beholden to not much outside of itself that is complete and eternal. Human beings make few incursions into these maps, and those that do may seem transitory or even ineffectual in light of California’s broader presence. That being said, this is a book of maps composed in the early 21st century, when the systems of human ecology seem to have infiltrated every natural system except perhaps in the deepest reaches of backcountry wilderness. Issues like the damming of rivers, man-made climate change, and what tomorrow may bring are addressed throughout the book at multiple junctures. However, with the exception of chapter 9, which is based on the largely arbitrary political overlay that makes up California’s 58 counties, humanity is a second thought.

I make more reference to major walking trails in this book than I do to roads. Trails tell a different story in that they are often designed to follow ridgelines or to penetrate deep wilderness, unlike a concrete monstrosity useful only for the automobile. The chapters are divided by elemental theme and not by adjacent geography, so one map might follow another that depicts an area several hundred miles away. 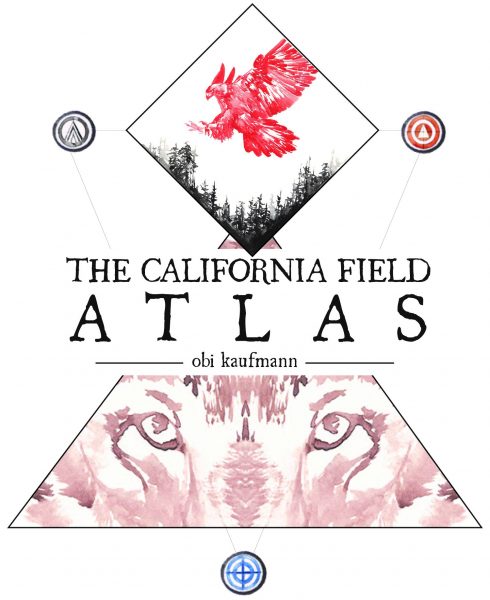 My palette was chosen largely from an intuitive place, from my many decades of walking California, and it was designed to convey an abstract spectrum between warm and cold, forested and barren, urban and rural, low and high, and a thousand other polarities open to personal interpretation. Throughout the book, you will find portraits of critters, flowers, or other wild features of the local landscape. I am a wildlife painter; this is my background, vocation, and passion. I have chosen each creature as a kind of totem protector of the region it represents. I see a pantheon of biodiversity on display and an almost topographic relevance in the well-rendered animal, as if the aesthetic truth in form between the portrait and the map are philosophical equivalents, and whatever the reference might be, meaning resonates in the transmitted beauty. 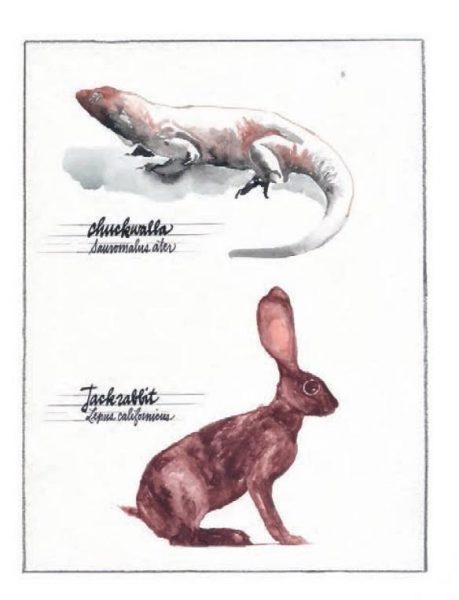 After you have acquainted yourself with the chapter structure of The California Field Atlas, the flow of the maps within each chapter, and the mode of information conveyed in each map, then the poetry of the book will be available to you. You can sit with the words. The names are the heart of the power in the geography.

A map can be an invitation, an invitation to wield power over a place, to understand its systems and to be counted among its people. The power of geographic literacy is rewarding in its own right, but it is essential to being known as being from any certain place. The California Field Atlas is ultimately a map to some intrinsic part in the identity of every Californian: an invitation to those from here to understand what “here” actually is, and for those not from here to maybe understand what being a Californian actually means. This book offers a great unburdening of ignorance and empowers all of California’s native and adopted children with a useful mythology, a tool belt to help them unlock their own place within California. This book is not full of road maps, and it won’t help you if you are lost in the woods. It comes with a different set of guarantees and assurances, in that it plainly lays out the entirety of the state as a single, integrative being composed of living patterns and ancient processes. The book describes California’s core systems of geography, ecology, and topography and shows how those individual systems conspire together to become greater than the sum of their parts.

The Borrego Art Institute celebrates the publication of The California Field Atlas on September 14, 2017 from 5-7:30 pm. Drop in for appetizers and wine and say Hello to Obi Kaufmann. There’ll be a silent auction of a painting from the book, to benefit the Anza-Borrego Foundation. Obi’s desert artwork will remain on display in the gallery through October 8, 2017.

On Friday, September 15th, 2017, from 3pm to 5pm, Obi Kaufmann will sign books at the Anza-Borrego State Park Visitor’s Center. 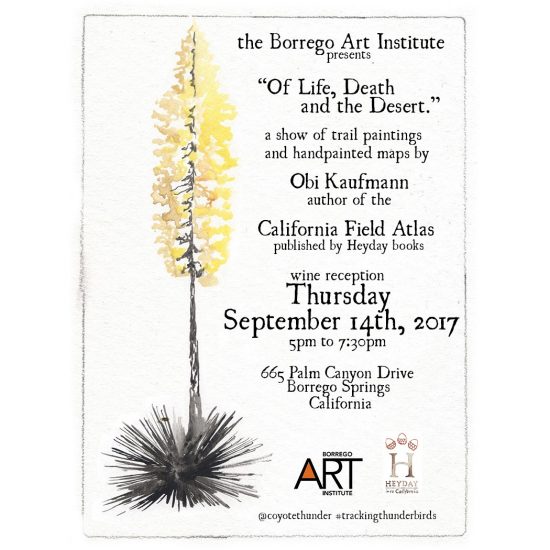