Join me in saying Thanks to the state of South Dakota for sending Ronald Backer our way. It’s as if the Great Plains groomed this artist just for us–salting him with treks to Spirit Mound and seasoning him with the lore of Deadwood. They wrapped him in tradition and delivered him to Palm Desert with the specific task of bringing Americana to the Coachella Valley. 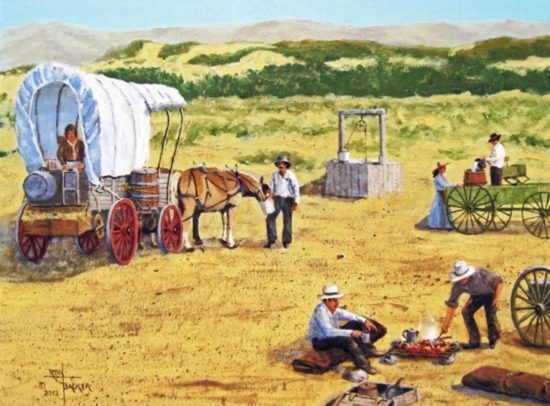 County Well on the Bradshaw Road in Indian Wells.

The poor man doesn’t know what he’s up against. With metal sculptures in the medians, Chihuily glass anemones in the galleries and Donald Judd’s minimalist bunkers occupying the new museum—it’s clear that the modern rules this young city. 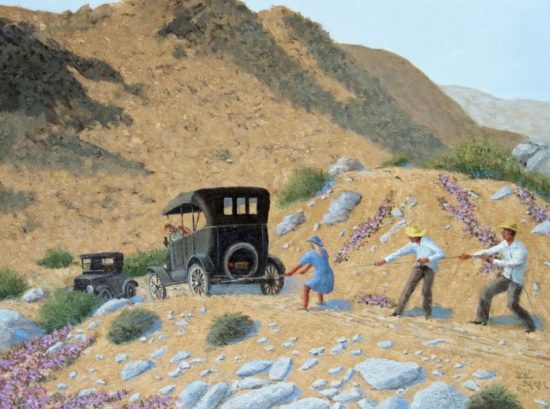 Almost There. The Bradshaw Trail.

In contrast, when I went to visit Backer and his wife Elie Marty at home recently, I felt like I was paying a call on Norman Rockwell and Tammy Wynette. Ron paints like the great illustrators of the early 1900s; Elie is an equally rootsy country music composer and singer. The couple collaborates on everything, so the paintings morph into ballads and ballads into paintings.

I knelt on the floor to study Backer’s new Coachella Valley paintings propped here and there against furniture and walls. Here were the stories I knew—the Bradshaw stage, the old county well in Indian Wells—melded with the landscape I love. Here was someone else who sees how the stories and landscape of the Coachella Valley are resoundingly intertwined.

Like the late Carl Bray, who provided ongoing yarns for each of his paintings,  Backer offered a running commentary on the characters in each painting as I trailed him around the house. “Story paintings,” he calls them.

On his easel was an in-progress painting of the Agua Caliente stage stop, based loosely on a sketch by Carl Eytel. “The muleskinner is coming in from the Colorado River,” Backer said. “The mules are roughed up and need halters.  The man in the white shirt, Jack Summers, was hired by Bradshaw to run the station…”

In the same room, above the copier, a woman steps off the Deadwood stage in one of Backer’s South Dakota paintings. The prairie and the desert collide everywhere in this house. 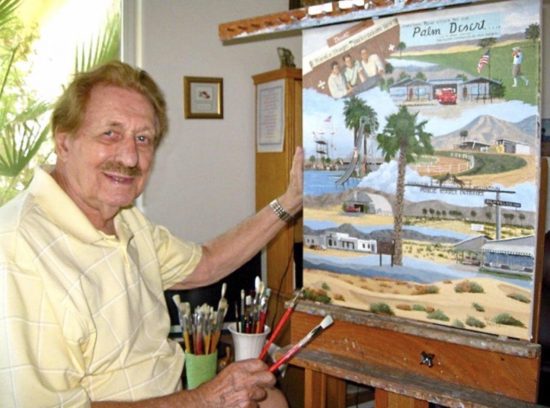 Ron Backer working on his poster for the Palm Desert Historical Society.

Ron was born in Worthing, South Dakota in 1922. As a boy he milked cows and skied to a one-room schoolhouse in winter. As a young man, he attended the Fred Archer School of Photography in LA but his artistic interests were put aside while he raised two sons with his late wife, Mavis Thompson.

Backer then went to work for NASA as a purchasing officer; he assisted in the Apollo Space Program. “I missed the art part of my life,” he remembers. “So I told my wife: ‘Get me a paint set for Christmas’. Evenings I’d go down in the basement and paint.”

After his wife was killed in a car accident in 1973, Ron became reacquainted with the girl next door. Elie Marty was hanging clothes on the line at her mother’s house in Centerville, south of Sioux Falls, one day. Ron was sitting on a bench under the cherry tree next door. Elie’s mom, watching through a window, hollered “Minnie’s son is home!” The couple was married in 1977.

Ron retired from NASA in 1979, determined to be an artist. He and Elie moved to California; he took art classes at Laguna Beach School of Art and the Otis Art Institute, as well as attending workshops sponsored by the Cowboy Artists of America. 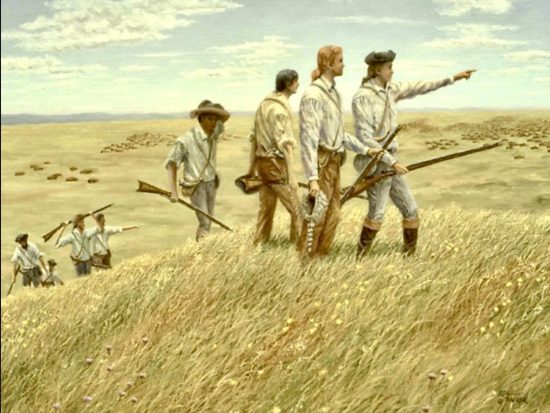 Lewis and Clark on Spirit Mound

Though gaining ground as an artist, he was still groping for a direction: “Where do I belong? What am I going to do?” One day in 1988, on a return visit to South Dakota, he and Elie climbed Spirit Mound, a prominent landmark on the Lewis and Clark expedition. Leaning into a hot prairie wind, they snapped photos and took turns posing as expedition members wielding make-believe muskets. The painting Ron made from the photos—Lewis and Clark’s Spirit Mound—was reproduced as limited edition prints and sold to raise money for the preservation of Spirit Mound. The National Park Service liked Ron’s paintings so much, they incorporated them in their kiosk at the site.

The popularity of his Spirit Mound paintings gave Backer his focus. He would paint like the great historical illustrators he admired, Mort Kuntsler and Harvey Dunn (also a South Dakota lad). “I said, OK, this is where I belong.” It was not a trendy choice. Narrative historical paintings (the equivalent of epics in literature) were popular in the 18th century. The genre became prominent again in the early 1900s, the golden era of book and magazine illustration. But since then the scene has mostly fizzled, aside from a small clique of men who paint Civil War battles.

The bias against narrative painting is so great that Backer has heard potential buyers say: “If you didn’t have a person in that painting, I’d buy it.” Yet South Dakotans appreciate his efforts. He was inducted in the South Dakota Hall of Fame in 1996 as “Artist of the Year”.

After moving to the desert in 1990, Backer began spending time at local historical societies and looking for themes for his work. He discovered, for instance, the old Thermal Schoolhouse, which opened in 1902 with nine students. “I like to find a place and an event,” he says. He also looks for inspiration in movies and country tunes. The more romance, the better. Sometimes Elie hears a song and asks: “Will you paint that, Ronnie?”

While “folk art” and “primitive art” can be pejorative terms these days, Backer’s paintings are decidedly non-slick and non-academic. In their focus on characters and stories, they indeed have a lot in common with folk songs and ballads.

Backer faced challenges on his new turf. He had generations to get to know the plains; the California desert was all new to him. Also, the history is thinner here. It requires more teasing out, more imagination. Fortunately, Backer believes imagination has a righteous role in art. “Legends are more interesting than documentary history,” he says. “There’s always more there.”

In a sign his vision is making inroads, the City of Palm Desert just booked him for a one-man show in their Community Gallery during Desertscapes in April, 2013. “The Art in Public Places Commission, who does the selecting for the gallery, was interested in both the quality of Ron’s work and the historical and educational approach that he takes,” says Deborah Schwartz, public art coordinator for the city. ”His work falls in nicely with the upcoming season. “

Modernism has been good to the desert, but still we have been half-starved for something more traditional and nourishing. Ron Backer is happy to be it. “I’m just loving what I’m doing out here,” he says. “I just wish I’d started sooner.” 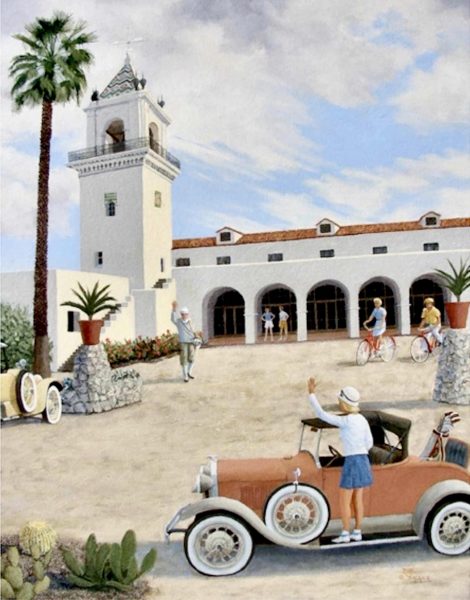 8 comments for “Ron Backer: Bringing Americana to a Stronghold of Modernism”