I was walking through the library at Idyllwild Arts Academy one day when my attention was grabbed by hunks of color in the shape of a familiar local landmark: Suicide Rock. The colors were almost cartoonish, but the painting drew me in perfectly. 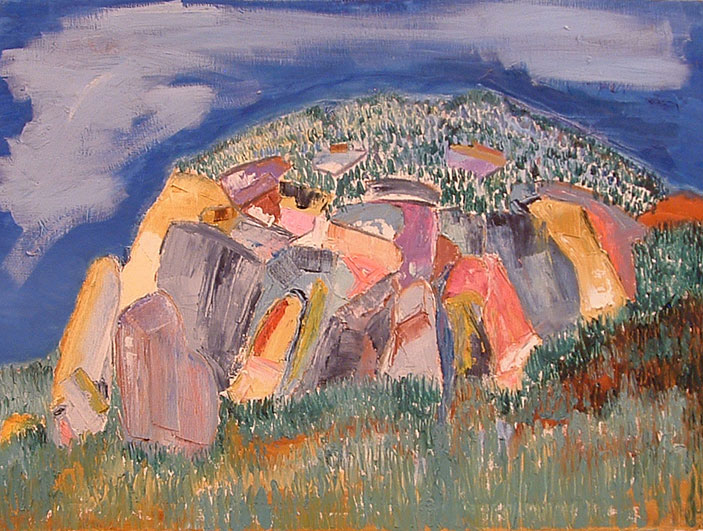 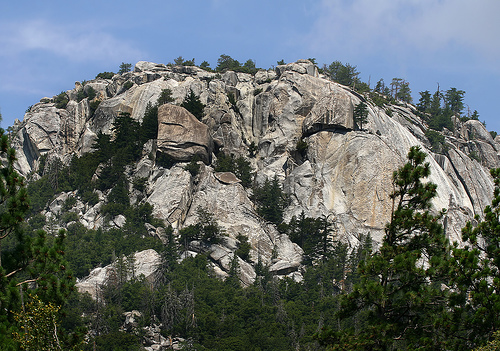 On the wall near the painting I found a note with contact information. I had a hunch the man who painted Suicide in outrageous regalia knew his rock. But I could not have guessed at the many-layered story or the great spirit behind the painting. This is why I say: If you find a desert painting you like and the artist is under-known, start scratching.

The artist was Steve Hudson. Jayne Davis, a retired teacher living in Idyllwild, told me her partner Steve–a third generation California landscape painter–had died unexpectedly of a heart attack a year earlier. Just before his death he’d been painting feverishly late at night to Bach and Brahms. 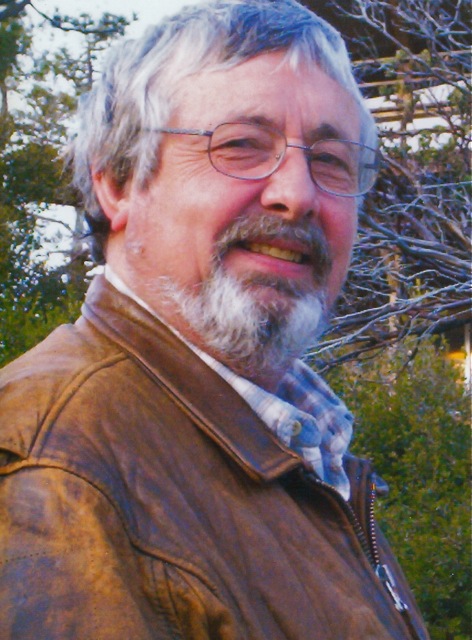 In telephone calls, emails and a subsequent visit to Jayne’s house in the mountains, I got to know this artist and teacher. I can’t think of another painter who so completely claimed the local mountains as his subject. He grew up in little Mojave desert towns where his father—also a painter—worked as a dynamiter for a rubber company. As a small boy, Steve wrote: “I could be found most days wandering the sagebrush in my six-guns and chaps and riding down rustlers.”

He earned a BA in English at California State University, Long Beach, in 1972 and came to Idyllwild in 1985, before there was much of an arts campus. When he started work as a maintenance man for the art school, he spent an entire winter camping on the Academy grounds in the cold. The administration soon recognized his talents and he was promoted to public relations officer and then teacher.

It was a fortuitous meeting of a place and a man. Founded in 1946, Idyllwild Arts was originally known as ISOMATA, Idyllwild School of Music and Arts. While never well known to the public, Idyllwild Arts has long been a cauldron of inspiration, hosting visiting artists such as Ansel Adams, Harry Sternberg (printmaker and muralist) and Cathedral City’s Val Samuelson. Young lives are changed here, and Steve Hudson had a hand in changing many of them.

He seemed destined to teach art, a subject entwined with his other major interests: history, mythology and heroes. On his blog (see link below) he wrote about everything from Caravaggio’s Death of the Virgin to Mr. Potato Head. He was especially known for moving lightly between high and low brow culture, and for refusing to value one over the other.

Steve also had a talent for place. Apache Peak, Spitler Peak, Garner Valley Rocks, Toro Peak, Strawberry Valley–these are just some of the local sites that appear in his paintings. He studied John Constable’s skies and became known for his own momentous clouds: “Dancing shivas of destruction and renewal,” as he called them.

His love for the California landscape was at least partly inspired by his father, James Hudson (1921-2004), a painter of the Owens Valley and the Sierra.  James’ father Forrest F. Hudson was also an artist in Long Beach in the 1930s, making Steve a third generation California Impressionist.

Young Steve often went along on his father’s sketching trips. On one occasion Steve told his dad that his mountains didn’t look like the actual mountains they were looking at. “I’m not painting the Sierras,” James answered. “These are my Sierras.” In the same way, Suicide Rock became not the real granite but Steve’s granite.

When he painted the version that caught my attention, he had just returned from a trip to Santa Fe –“the colors of that region still hot in my mind,” he wrote. “Most of it was executed with a palette knife and I was thinking about Cezanne the entire time.” This explains my pleasant shock when I saw the rock. It was Cezanne and Santa Fe and Steve Hudson all jumbled together to make a familiar place new and right. 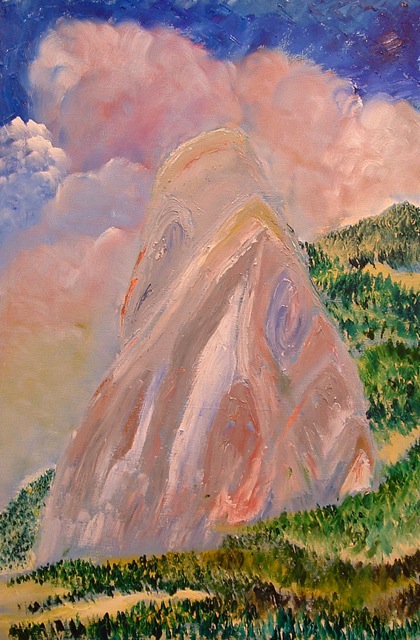 In the early years in Idyllwild, Steve got to know Suicide Rock and Tahquitz–also called Lily Peak–by climbing them. (Both were the stage for a famous big-wall climbing scene in the 1930s.)  Later on, back problems kept him from the peaks but he never stopped exploring them. “Although there’s magic in the dirt, rocks and botany of any place on earth, I think it’s especially close to the surface in our corner of the nation,” he wrote.

In the interest of my getting to know Steve, Jayne gave me a CD of his “last graduation”—his memorial service at Idyllwild Arts. “It starts slowly and quietly so be patient,” Jayne said. I put the CD in the car player and first heard some distant bagpipe music (Skye Boat Song). Dean of Arts Doug Ashcraft quoted Robert Bridges: “I too will something make and enjoy the making”, a line that expresses Steve’s humble, experiential approach to art.

As the service continued, a former dean said Steve’s mythology class was the most popular in the academy; student after student testified as to how this teacher helped launch them. “He made it easy and exciting to be a student and made each of us feel important,” said Erin Lattimer.

Another student, referring to the teacher’s lack of pretense, said he could go from discussing the Odyssey to Everglades swamp music. He loved baseball and Rembrandt equally. He wrote poems, played autoharp and dulcimer and drew goofy cartoons that appeared in the local paper. 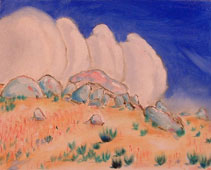 However, he was always happiest in the mountains, where he saw heroes, history and myth in every boulder. “That was the best for him—just to be outdoors,” Jayne says.

In recent years, after his ex-wife died, Steve became a fulltime caregiver for their severely disabled daughter and rarely left the mountain. He was seeing Jayne at the time and making plans to move into her house. With all his responsibilities, he’d gotten out of shape and Jayne fed him healthy food and took long walks with him. Their goal: to climb to the top of Mt. San Jacinto together.

In the last few months he was painting all the time. He never had much money but would haunt thrift stores and buy paintings for a dollar and paint over them. He was drawn more and more to the freewheeling visions of Willem de Kooning, Helen Frankenthaler, Franz Kline and Sam Francis. He experimented with cubism and abstraction and started listening to Chopin, Debussy and Brahms as he painted. 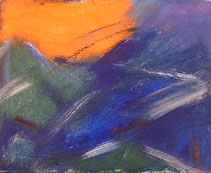 The Road to Kandahar

When Jayne found him dead at his home of a heart attack on July 7, 2012, the entire village of Idyllwild grieved. He was the very soul of Idyllwild Arts, said president Brian Cohen, in a memo to the staff and students. One student said she could not imagine the town of Idyllwild without Steve Hudson in it.

Jayne was left with Steve’s dulcimer and a collection of his paintings. I went to see her one day in her hillside aerie of a home. We stood for a moment before Steve’s Brahms’ Symphony # 1 painting hanging over the piano, and then we climbed the stairs to see what must his jubilant masterpieces, painted just before he died: Santa Rosa Fandango and Line Dance. 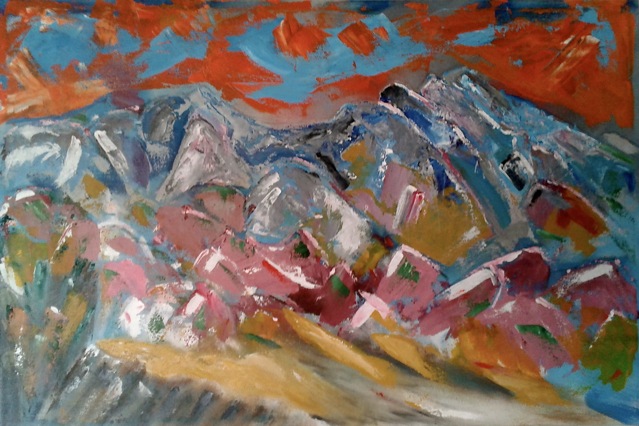 The day after my visit, Jayne woke up early and she and some friends hiked to the peak of San Jacinto and scattered Steve’s ashes. Steve had wanted to make it to the peak, and now he was there. 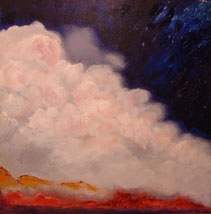 After hearing Steve Hudson’s story and seeing his work, of course I wondered why a painter with such an epic view of life and land wasn’t better known. As Brian Cohen wrote in the Huffington Post:  “He wasn’t painting to be remembered or even noticed, but I think his work will be.”

Rainmaker, a portrait of Steve Hudson by David Reid-Marr.