July 8, 2010–On a recent morning, Kim Housken and Don Graybill (volunteer sleuths from the Historical Society of Palm Desert) squished into my Subaru and we drove off through the stately pines and meadows of Garner Valley in search of Agnes Pelton’s cabin. 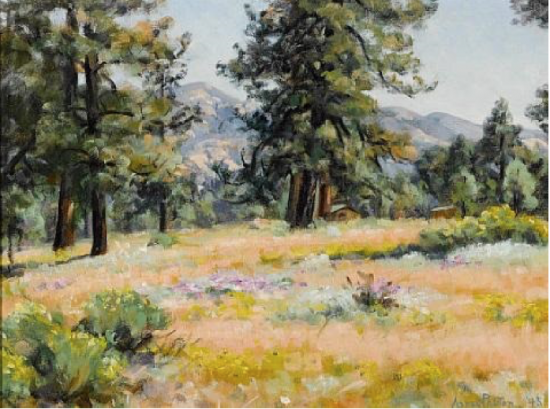 It’s well known that in 1941, at age 60, Pelton bought a cabin in the mountains above Palm Springs. Yet for all these years no one has known exactly where it was. Occasional inquiries to Pelton scholars and mountain historians over the years have turned up nothing.

Why did Agnes go to the mountain, anyway? After all, she had a fine view of her beloved San Jacinto peak from the porch of her Cathedral City home. Why buy a second place?  The prosaic explanation is—like everyone else who lives in the desert—she wanted to get out of the heat. On another level, Agnes Pelton was always reaching for transcendence, and in the last years of her life that transcendence was represented by Mt. San Jacinto. She wanted to get closer.

Her paintings tell us she saw mystical orbs and rays around and above the peak (not hard to do); and the inscription on the cover of her guestbook–“Hail San Jacinto!”–suggests the peak was central to her art and her heart. As she was growing old, Pelton went back and forth from the desert floor to her cabin just south of the mighty peak. When she died in 1961, friends scattered her ashes on “San Jac” as locals call it. The mountain mattered to this artist as much as Abiquiu to Georgia O’Keeffe. (The two artists’ names are forever linked due to similarities in their biographies and their work.) 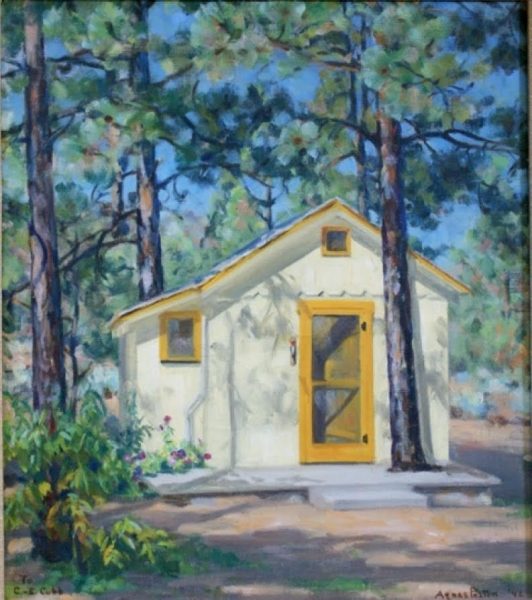 Agnes Pelton’s painting of her cabin, 1943. Courtesy of Kirk and Linda Edgar.

Those of us who love Pelton’s work knew we had a righteous art-historical quest on our hands. But first we needed a break in the case of the missing cabin.

The first came when Robert Hillery, first mayor of Cathedral City, and a family friend of Pelton’s, drew a map showing us approximately where the cabin had been: in the little cluster of dwellings called Thomas Mountain. Pelton bought her cabin from its builders, Claude and Edna Cobb, owners of the first market in Cathedral City. The Hillerys owned the cabin next door, and used to give Pelton rides up the hill. (She didn’t drive.)  Still, since Bob didn’t recall the address, we needed more clues.

The next break came when Long Beach art collectors Kirk and Linda Edgar e-mailed an image of a Pelton painting they’d just purchased—a white cabin with yellow trim. It was dated 1942 and inscribed: “To C + E Cobb.” I ran the painting by Bob Hillery and he said, indeed, it was the Cobbs’ old cabin, the one Pelton had bought from them.

Now Kim and Don and I had our motivation to drive up the famously serpentine Highway 74. After stopping to look in the busted windows of a historic roadhouse (this group loves ruins) we turned into a neighborhood crowded with humble abodes. We drove slowly down Barbara Lee Drive and started looking for a place that matched the painting. Specifically we were looking for a listing pine tree growing through a porch, a steep roof, an aura of genius.

The cabins were pressed close together, the old jumbled with the new and everything added-onto and remodeled.  Nothing looked like the cabin in the painting. I would have driven right by the place, given up and gone home, but Kim was equipped with a historic plot map and also a better eye for detail.

What tipped her off? “It was the combo of the shape of the cabin roof, the door and window and the tree; and I was darn certain that was it,” she said later. “The icing on the cake was the scalloped trim above the door.” 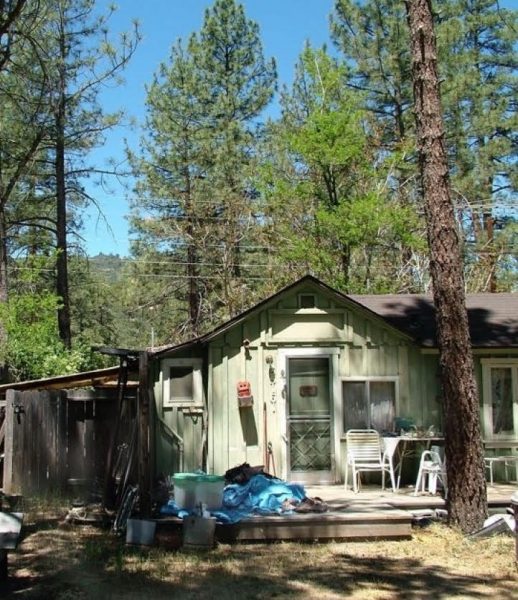 We parked in the shade of the pines and gawked at a house littered with blue tarps, multiple garbage cans, discarded lumber and trash. There was a pine tree in front. It wasn’t growing through the porch (the porch had been cut away and the cabin expanded) but it had the exact same lean as the tree in Agnes’ painting.

About the time I realized for sure this was Pelton’s cabin, a baby began wailing next door and the neighborhood dogs set to barking. The baby’s mother came outside and told us there was no one home at 35161 Barbara Lee (Pelton’s place) and it was alright to walk around the house. We stomped up on the porch like a team of zealous home inspectors, taking photos of the leaning tree, each other and details like the “Chipmunk Manor ” sign above the door. Don scraped a sliver of the original yellow trim hidden under more recent layers of paint. Kim found some old bedsprings stashed beside the house and wondered if she’d found a Pelton artifact.

We knew Pelton had taken strolls right out the back of her cabin and into the ribbonwood forest, so we drove around and parked on a back street. There was a big meadow between us and the back of Pelton’s house. We walked through a field bright with red Penstemon and purple lupine, and then paused in a clump of tall Jeffrey pines. We just knew this was Pelton’s private grove. For me, the sense of her presence was stronger here than it had been  around the Cathedral City house or on the porch of the cabin. 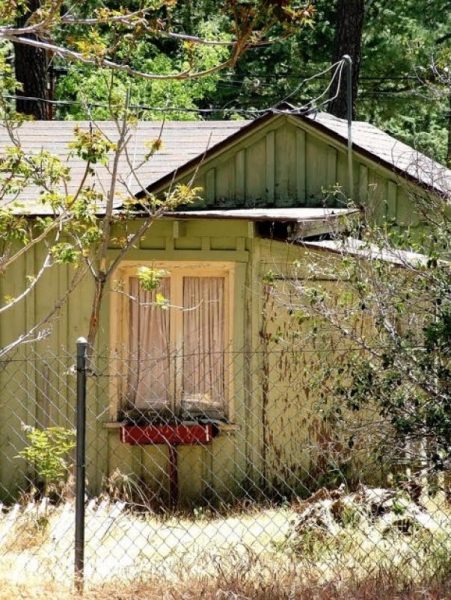 Pelton’s cabin from the meadow behind. Photo by Kim Housken.

Before we left I stuck a note behind the screen door and the next day the owner, Steve Moulton, telephoned. He’d never heard of Agnes Pelton and had no idea he was living in a historic residence. He told me he owns Bubba’s bookstore in Idyllwild and hauls trash for extra money (thus the trash around the house). Even with the more recent addition to the cabin, he says it’s only 450 square feet, which made us wonder how Pelton even managed to paint in there.

By not making changes to the house, Moulton is acting as a preservationist  in his own way. Pelton’s cabin will remain as you see it here.  “I’m not a fixer-upper,” he says. “The mice control the attic. This place will crumble around me.”

Sincere thanks to Steve Moulton for allowing strangers on his porch, and to Bob and Kay Hillery and Kirk and Linda Edgar for helping to solve the mystery of Agnes Pelton’s cabin. 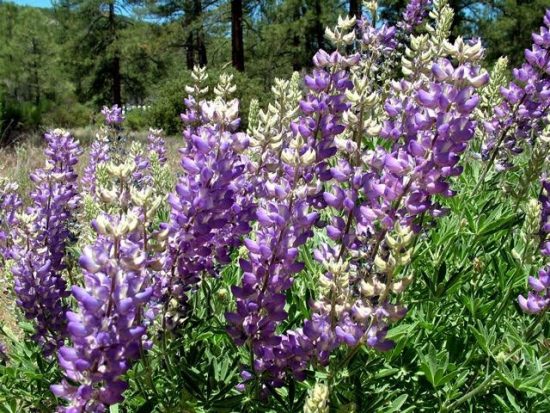 10 comments for “The Hunt for Agnes Pelton’s Cabin”