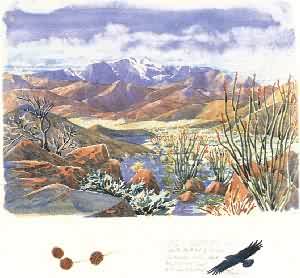 Tony Foster lives in Cornwall, England, surrounded by the sea, and breaks for tea every two hours when he’s out painting. Can this man truly be called a desert artist?

A Smoketree painter he is, for our purposes. Not only because he has painted Mt. San Jacinto from atop the Joshua Tree hills, but because he lives by the rules that governed the early desert painters:

–When you get there stay awhile.

When I first saw a book of Tony Foster’s enormous watercolors (Painting At the Edge of the World) at a gallery in Santa Fe I was stunned that I’d never heard of him. But many art followers have not. Here’s a fellow who has tramped the world’s great wildernesses for almost 30 years, keeping watercolor diaries along the way. He’s been too busy for a lot of self-promotion.

As I turned the oversized pages, I found intricate renderings of familiar landscapes including Anza Borrego, Death Valley and Joshua Tree. It was obvious Foster had lingered in each place. He was an instant hero of mine.

When I heard he would be returning to the Southwest for his latest project I wanted to know more and sent him an e-mail. Foster’s wife, Ann, replied from Cornwall, saying Tony was in New Mexico. Soon I was talking to the artist on his cell phone. He was wrapping up nine days of camping in El Malpais, where he had painted through downpours and a blizzard.

His southwest journey this spring will be a personal odyssey like all the others, in search of something he hasn’t completely defined yet.  He’ll be rafting the San Juan river in Utah, canoeing Lake Powell to paint Rainbow Bridge, then trekking to the Muley Point overlook to paint a large view of Monument Valley. If we’re lucky, something will draw him to the California desert. 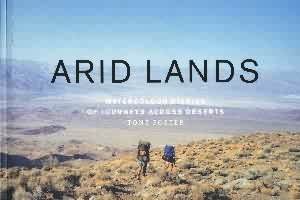 Foster has often been compared to the great expedition artists of the early West–men like Thomas Moran, who made some of the first paintings of Yellowstone, and Baldwin Mollhausen, who made watercolors of the California desert on a US Army expedition in 1858. “All art is about exploration,” Foster once wrote. “Cezanne was exploring apples when he made those great still-lives.”

Hiking as many as 12 or 14 miles a day, Foster carries two playing-card-sized watercolor paint boxes. Metal tubes hold the paper he uses to create his paintings, which are as  large as 6 feet. He keeps an expedition log and incorporates notes on weather, geology and moods in the paintings. His work is also annotated with feathers, pouches of volcano dust, packets of seeds and other found objects. 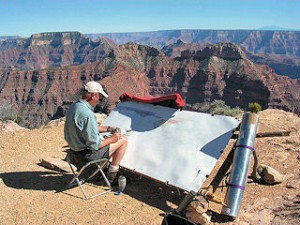 Tony Foster in the Grand Canyon, photo by Annis Englen

Foster has been everywhere grand—the Himalayas (There’s a documentary about his work there:  The Man who Painted Everest), the Maldives, the Andes, the Grand Canyon, Okefenokee swamp and the Greenland icebergs. In the manner of the great landscape painters of the early West, he’s always seeking to protect the places he paints.

He’s a fellow of the Royal Geographic Society, a distinction given to the world’s great explorers. He’s been dropped into volcanoes, and retraced the routes of Lewis and Clark. Yet he doesn’t have the mentality of an action adventure hero. “I never believe in conquering mountains,” he once said. “You might manage to scramble up one but it doesn’t mean you conquered it.”

The real struggle, of course, is always with himself. He is given to storms of doubt about his work. In his desert travels, the struggle sometimes involves seeing what there is worth painting. Like most people who didn’t start out in arid landscapes, he is undoubtedly used to more green and more drama.

There are added difficulties traveling in the desert. He must lug 8 lbs of water a day and watch his watercolors evaporate on the paper. Sometimes he tosses a shirt over a creosote bush to make enough shade to paint in.

Once the logistics are worked out, though, the artist’s task never varies: “I see nobody. I paint. I walk all alone.”

Foster’s recent Southwest watercolors will be displayed at Gerald Peters Gallery in Santa Fe in June and July of 2012, in an exhibit called “Sacred Places: Watercolour Diaries from the American South West”. 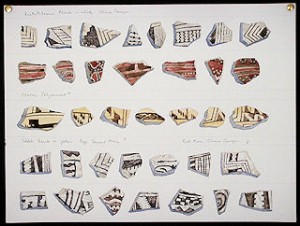