April 18, 2019–Ever since Agnes Pelton and Agnes Martin were paired in a 2009 exhibit at the Orange County Museum of Art, the two have seemed like sisters–though apparently they never met. 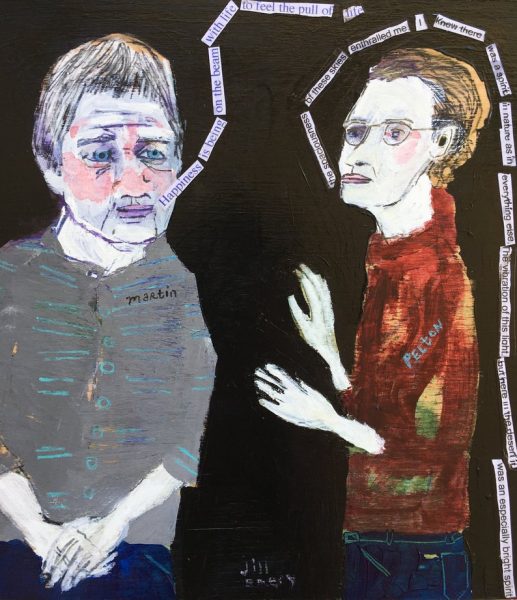 Jill Emery, The 2 Agnes alone together in the desert with their thoughts.

Both women sought vastness in the desert (Pelton in Cathedral City, Martin in New Mexico) and both peered beneath the sandy surface to arrive at their abstract work. They finally meet in Jill Emery’s  folk art piece: The 2 Agnes alone together in the desert with their thoughts.

Martin tells Pelton: “Happiness is being on the beam with life…”

Pelton answers: “I knew there was a spirit in nature as in everything else.”

The self-described outsider artist Jill Emery is a recent transplant to Palm Springs. She was the bass player in Courtney Love’s band Hole as well as the band Mazzy Star. For more of her work, see: https://www.etsy.com/shop/sallygotsthe

The KCET Artbound website is republishing select articles from this website, with updated content. Thank you to digital producer Carren Jao for bringing the stories to a larger audience. For a new look at the Araby rock houses see:

The current popularity of the desert has reaped billions of tourist dollars at the same time it has sucked away the enchantment that thrived here before Instagram. Dragons and mysteries tend to recoil from the spotlight. To restore the lost aura, look to Dan Bell’s Tolkien-style maps. The young British biologist and cartographer is re-enchanting National Parks, including Death Valley. 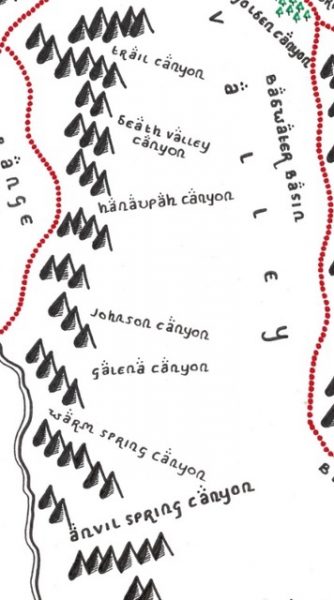 A section of Dan Bell’s map of Death Valley

I asked if he has a Joshua Tree map on the drawing board. “A map of Joshua Tree isn’t quite in the pipeline yet,” he said. “But I would very much like to draw it. I visited last year, and I have to say it fast became one of my favorite places.”

Joe De Yong: A Life in the West

William Reynolds’ in-depth new book on artist Joe De Yong (1894-1975) illuminates the life of Charles M. Russell‘s only protégé. Cowboy illustrator and artist De Yong is linked to Coachella Valley art history. In 1934 he joined the equestrian group Ranchos Visitadores and made treks to Palm Springs, enjoying the friendship of cowboy mayor Frank Bogert. In the early 1960s, De Yong’s drawings of cowboys and outlaws graced the walls of the Desert Sun newspaper offices. The artist exhibited at the Palm Springs Desert Museum (now the art museum) and the influential Desert Southwest Gallery in Palm Desert.

The artist was deaf due to childhood meningitis but left a big imprint on Western art and the movies he worked on as an illustrator and designer. 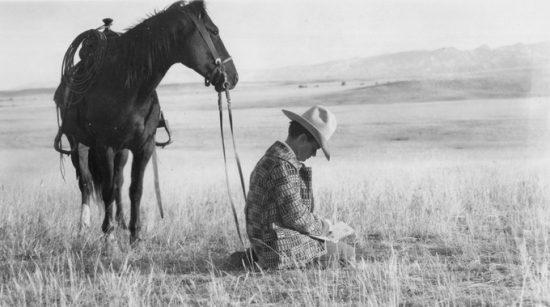 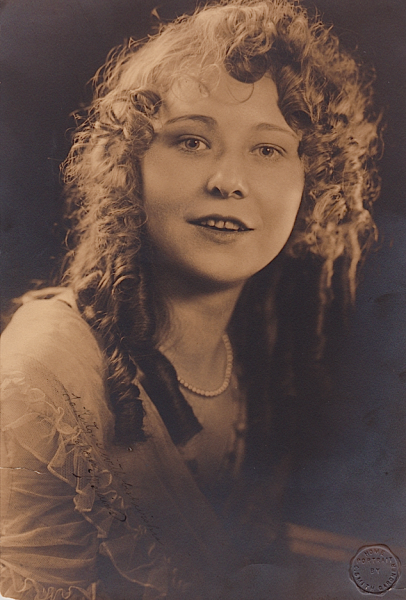 The daughter of Zorro creator Johnston McCulley, Beatrix lived in a modernist home at 74-375 Peppergrass, sharing the residence with LA art dealer Mildred Seamster. Beatrix, who died in 1983, specialized in portraits and was an active member of the Desert Art Center, the California Art Club and the Laguna Beach Art Association. Prior to her art career, she was a silent film star known as Maurine Powers.

Andes is writing a book about Johnston McCulley and is trying to locate any McCulley family papers that might have been sold with Maurine’s estate. If you have clues, please contact him via his website. https://zorrosghost.com/

A Tribute to Hermann Fischer

Hermann Fischer grew up in Germany and didn’t become a desert painter until age 70. Even with the late start, he was one of our best. His desert paintings have a force recognizable even to me, a non-artist. I visited with him and his wife Eva at their Palm Desert home for a 2014 article; I was sad to hear recently that Hermann passed away in July, 2018. I trust his work will reappear when we least expect it. It’s too good to vanish. For inquiries about Hermann’s paintings, call Eva Fischer: (760) 568-9030 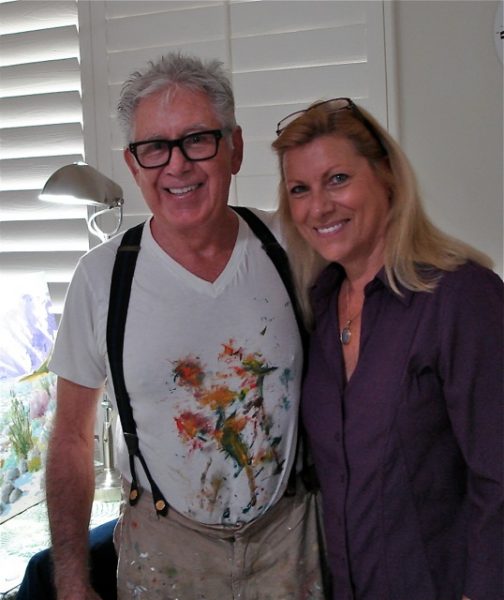 The 1940s school bus greeted generations of trekkers on the Mojave Road before it vanished in March, 2018. (It had been hauled off when the land where it rested was incorporated into the Mojave National Preserve.) In a joint effort of the Mojave Desert Land Trust and the Mojave Desert Heritage and Cultural Association, the bus came home on April 10th, 2019. 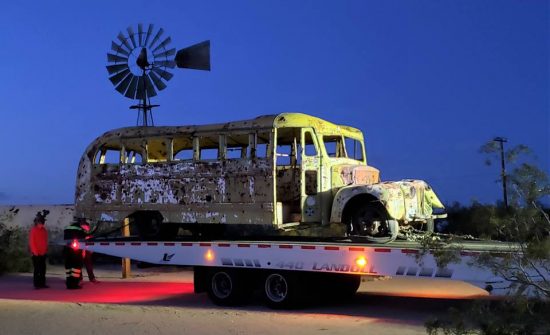 The heroes of the day were volunteer Steve Reyes and Steve Ward of A-Toe-Truck company. The bus will reside on the MDHCA campus “awaiting all future visitors who’d like to see or connect with this legendary artifact,” says executive director Laura Hammonds Misajet.

Diane McClary Back to Work

We reported here previously that the well-known La Quinta painter Diane McClary was forced to retire from painting due to health problems. In her January newsletter, though, she made the happy announcement that she has recovered and is back to work. Now living in Palm Desert, Diane is out painting the superbloom and teaching workshops. Happy Unretirement, Diane.

Archaeologist Jay von Werlhof and Brawley farmer and pilot Harry Casey worked together for 35 years to record the original land art of the desert: The Colorado River geoglyphs, giant rock alignments meant to be seen from the sky. 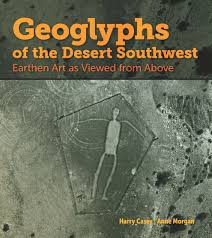 A former archivist for the Imperial Valley Desert Museum Anne Morgan worked with Casey (von Werlhof died in 2009) to present the works in a new book: Geoglyphs of the Desert Southwest: Earthen Art as Viewed From Above, out now from Sunbelt Publications.

In a new video about Erin Hanson’s Open Impressionism technique, the San Diego-based artist puts forth the revolutionary idea that landscape painters can shape the future with their vision. Watch this crowd-pleasing painter of deserts at work: 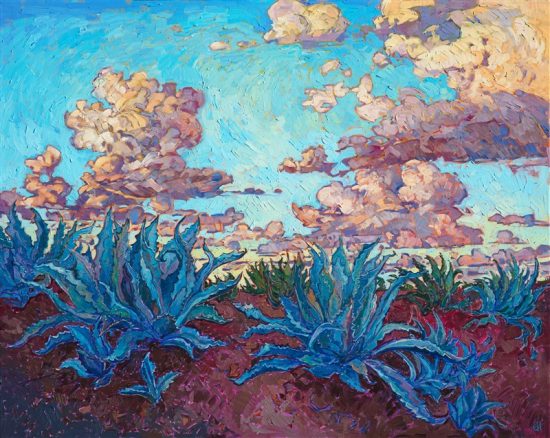 Each time I plan to post news about landscape photographer Michael E. Gordon, he’s on to a new discovery. I cannot keep up with his exuberant pursuit of  beauty. But if you care to try, I recommend Michael’s wondrous blog in which he discusses the benefits of soft focus when photographing the Sweetbush, the charms of the “funky-cool and not so common Desert Candle” and his rules of landscape photography: Step around EVERY plant you encounter, whether it’s alive or dead. And: “Don’t be a sheep with a camera.” 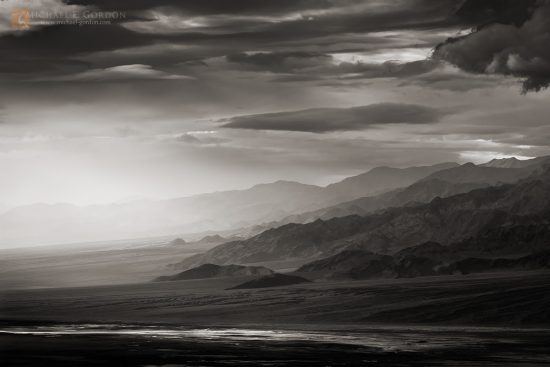