To explore the edges of California desert art, you sometimes have to leave the state. After all, the artists who painted Mt. San Jacinto didn’t pay much allegiance to state lines and many wandered over into Arizona. Arizona’s Pioneering Women Artists at the Museum of Northern Arizona in Flagstaff (now through May 12, 2013) introduces ten women who roamed the West from 1905-1940. Among them: Lillian Wilhelm Smith, illustrator of Zane Grey novels, and our own stagecoach artist Marjorie Reed. 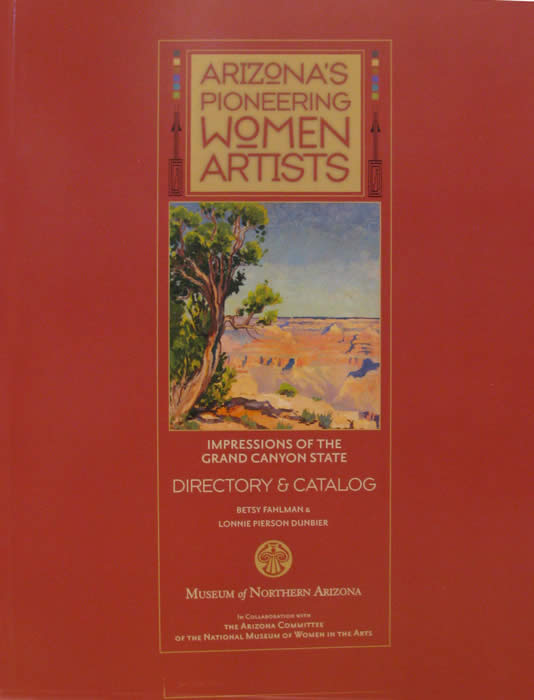 Exhibit collaborators Lonnie Pierson Dunbier, Betsy Fahlman and Fran Elliott have done tireless detective work to rescue the early artists from obscurity. The accompanying directory and catalog takes the project even further, as the team has uncovered some 450 women artists working in Arizona before World War II. The show and directory is a model for work that still needs to be done in the California deserts, where women were also left out of the official record. The eastern Coachella Valley, especially, nurtured a crop of farm wives stuck on remote ranches who spent their time painting what they saw around them.

The Directory is an excellent resource for collectors and researchers of obscure (and famous) desert artists. Many of the artists listed also painted in California. They include Marion Wachtel, Mary Maison, Evylena Nunn Miller, Louise Everett Nimmo and even Agnes Pelton—who is included for her Grand Canyon paintings.

For more on the Museum of Northern Arizona:

Is this mystery painting by William Darling?

Here at California Desert Art we sometimes receive requests to help identify mystery paintings and will from time to time pass the challenge on to you, the small but fervent pool of desert art fans. This request comes from Judith Bigham, regarding a possible William Darling painting of Tahquitz Canyon. She wrote:

“We feel we have an original by Darling, but it is unsigned and we have not tried to remove the original framework for fear of defacing it. In the ‘50s, my husband’s father, Orville Bigham, met Bill Haney [in Palm Springs] and did stone wall work for him. Bill gave him this painting and said it was a Darling painting. Bill Haney was very well-known in Palm Springs in the 1940s and did a lot of survey work in the canyon where they built the tram. Legend has it he killed a mountain lion there. I would love to know who did this painting.”

Can anyone help identify the artist? 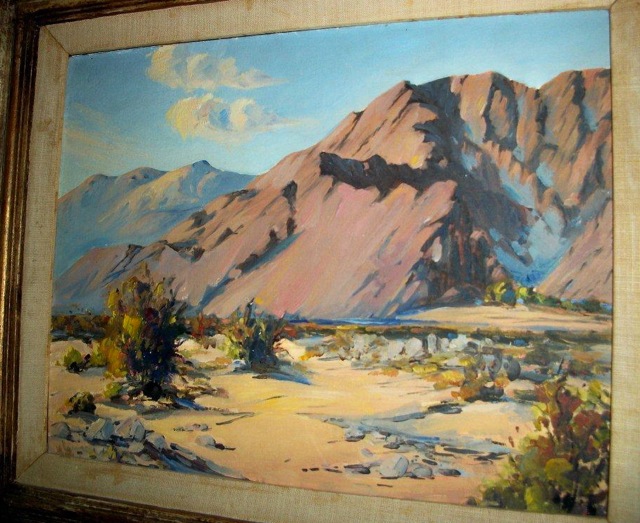 Now through February, 2013, The Pasadena Museum of California Art features one of the most stylish desert artists, wood engraver Paul Landacre, who died in 1963. While Landacre made his home in an Echo Park cabin, now a historic landmark, he frequently visited Palm Springs and was drawn to the geometric designs of  the local mountains. The artist and naturalist had a polio-like illness as a child that seemed to power his aesthetic curiosity. His fine art prints illustrated the cover of Westways and many books. From the titles of his works we know he visited Smoketree Ranch, Mount San Jacinto and the Palm Springs train station. In a coup for the Smoketree School of desert art, he even captured the ghostly smoketree in a stylized black and white print. 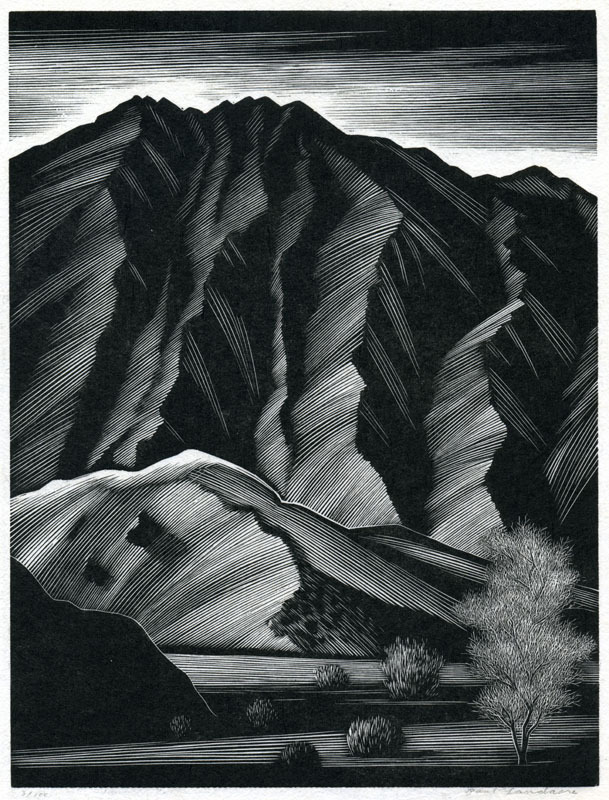 White on Black: the Modernist Prints of Paul Landacre through January 19.

Now that you have your 2013 calendars, put a big “X” through the month of April, when Desertscapes returns for a fourth year. Desertscapes is the Valley-wide extravaganza dedicated to boosting appreciation for historic and contemporary desert art. Look for a new website in coming weeks, with events scheduled throughout the month of April. The big news this year is an ambitious two-day event in Cathedral City honoring Agnes Pelton, with tours of her home, a major hometown exhibit of her work, and readings of works about  Pelton by Mari Coates and Nancy Strow Sheley.

We’ll post updates in coming months. In a small preview, here is Thomas Hollister and his sister Susan Seymour, with their three Pelton paintings. The siblings’ parents owned the Tramview Trailer Park in Cathedral City and the paintings came to them via their late parents, who undoubtedly met Agnes Pelton. You can view these paintings and many more Peltons at Cathedral City Hall in April. 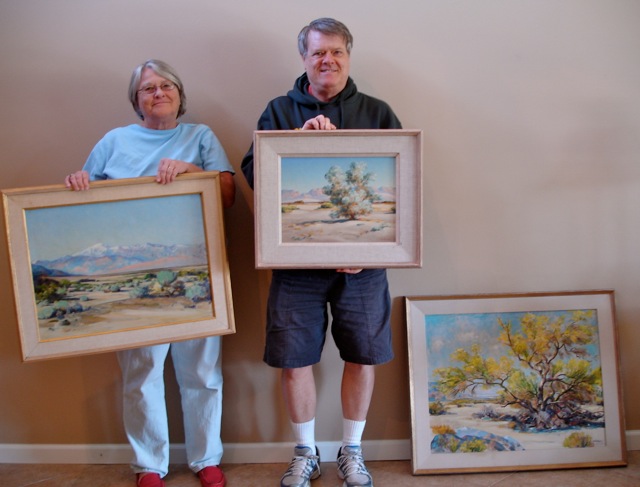 Watch for the schedule here: http://desertscapes.net/