Eric Merrell continues to be a primo ambassador for desert art with his new solo exhibition at American Legacy Fine Arts in Pasadena: Romance of the West—and the Western Spirit, July 16-August 13. The opening reception is Saturday, July 16, from 5 to 7 pm. 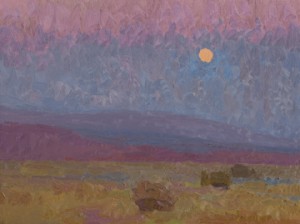 As historian for the prestigious California Art Club, Merrell seems to have channeled the souls of the early desert painters such as Sam Hyde Harris and Jimmy Swinnerton. A young man with charisma, authority and talent, he’s sweeping other painters along in his fascination with the desert, as well as early California painting in general. Merrell completed an artist’s residency in Joshua Tree National Park in 2009, and was included in a recent exhibit of Salton Sea painters, Valley of the Ancient Lake.

American Legacy Fine Arts is directed by Elaine Adams, executive director of the  California Art Club. Her husband, artist Peter Adams, serves as president of the CAC. The gallery, which is open by private appointment, shows contemporary-traditional fine art.

For more on the gallery, see: www.americanlegacyfinearts.com

For more on Eric Merrell: http://www.ericmerrell.com/