It seems the desert herself has elected an ambassador and sent her out into the world to represent us. Sharon Ellis–who works quietly in Yucca Valley–has a show, New Works on Paper, at the Kohn Gallery in Los Angeles through October 29th, 2022, along with seven paintings in California Biennial 2022: Pacific Gold at the newly opened Orange County Museum of Art. Then, starting December 10, 2022 (through January 28, 2023), she appears in the show Transcendent curated by Michael Duncan at Louis Stern Fine Arts. 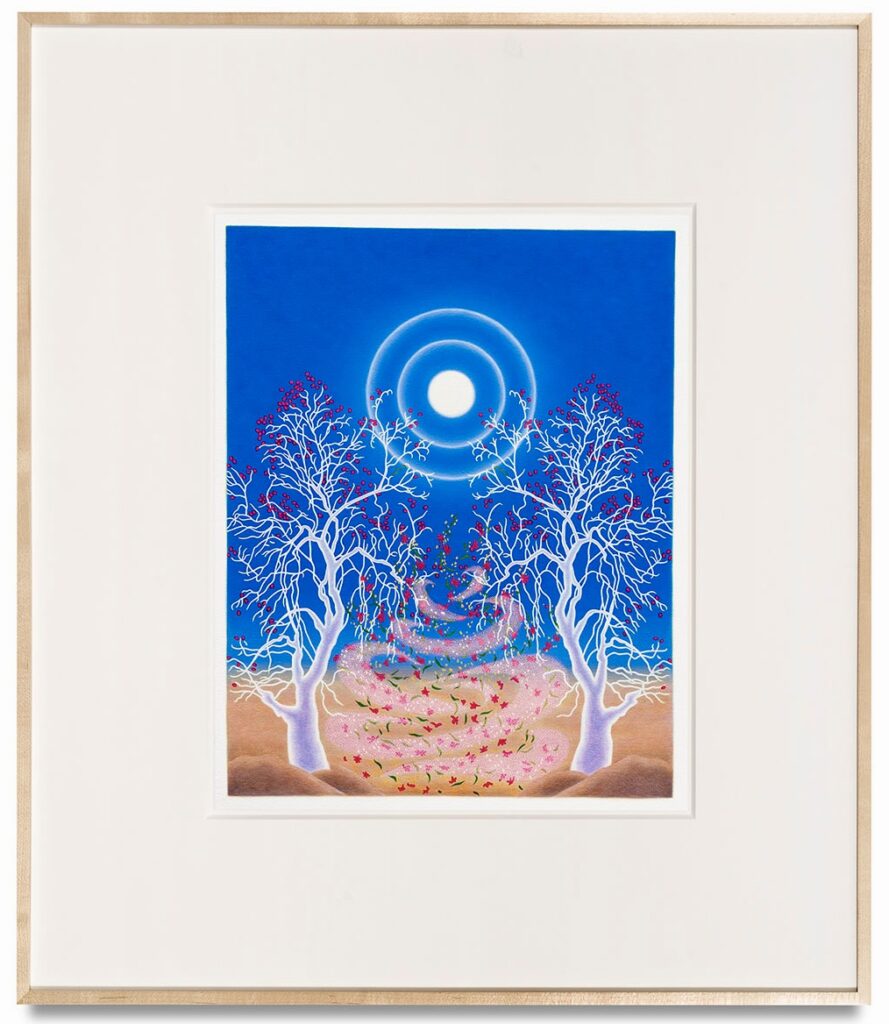 The California Biennial is curated by former Palm Springs Art Museum director Elizabeth Armstrong (she previously was a curator at the Orange County Museum of Art), along with Gilbert Vicario, who curated the star-making show Agnes Pelton: Desert Transcendentalist recently at the Whitney. Essence Harden is the third curator of the California Biennial.

Ellis herself was influenced by Pelton, as well as by her desert-rat aunts who lived in Wonder Valley. The forthcoming Transcendent show is a companion to the traveling exhibition also curated by Michael Duncan: Another World: The Transcendental Painting Group, opening at Los Angeles County Museum of Art on December 16, 2022. Being included in Transcendent places Ellis in the direct lineage of Agnes and the transcendental artists.

If all of these events are a lot for you to keep up with, imagine how the quiet ambassador feels. In between all the appearances she said: “Now I am deeply involved in laziness, hanging with my cats and following their example of how to live.”

Postcards from Mecca in Yucca Valley 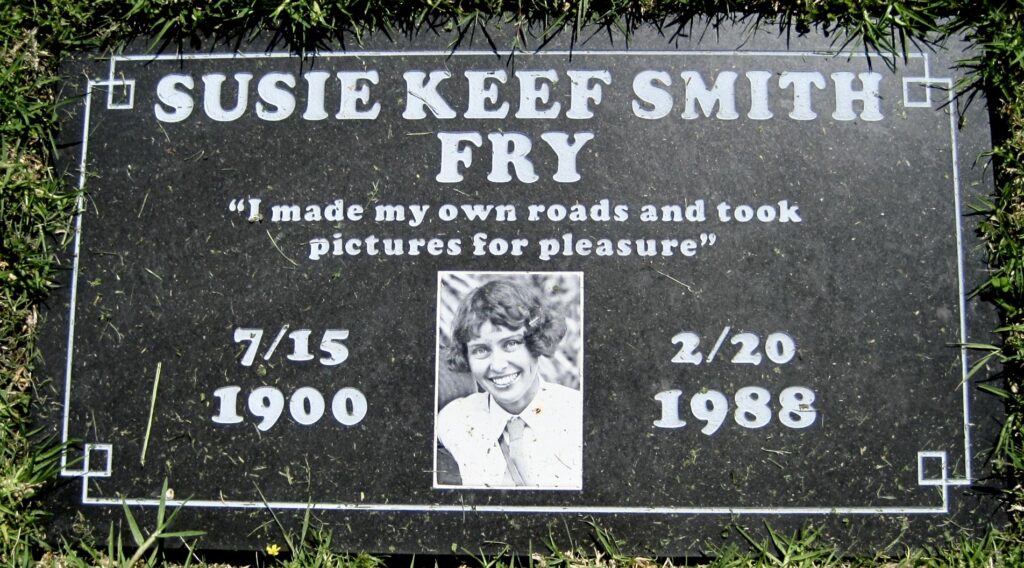 Those desert ambassadors of an earlier era, Susie Keef Smith and Lula Mae Graves, continue to spread the gospel of the Chuckwallas. The Postcards From Mecca exhibition–based on the book edited by Warner Graves III and myself–is currently on display at the Hi-Desert Nature Center in Yucca Valley (through October 29, 2022) and will make a future appearance in Park City, Utah, thanks to Exhibit Envoy, a California nonprofit that travels museum shows.

In another triumph for the duo, Warner Graves recently succeeded in his GoFundMe campaign to place a proper marker on Susie’s neglected gravesite at Eternal Hills Memorial Park in Oceanside.

Of all the names associated with desert wilderness, “Cactus Ed” Abbey has the greatest cred for his uncompromising advocacy in books like Desert Solitaire. As a fan of eco-outlaws and desert art, you’d think I’d know if there was a desert painter also named Abbey. But in all these years of writing on the subject, I never knew that the writer’s second wife—and mother of two of his sons–was a desert artist. Rita Deanin Abbey is such a well-kept secret that she’s been called “the most important unknown artist in Southern Nevada.” 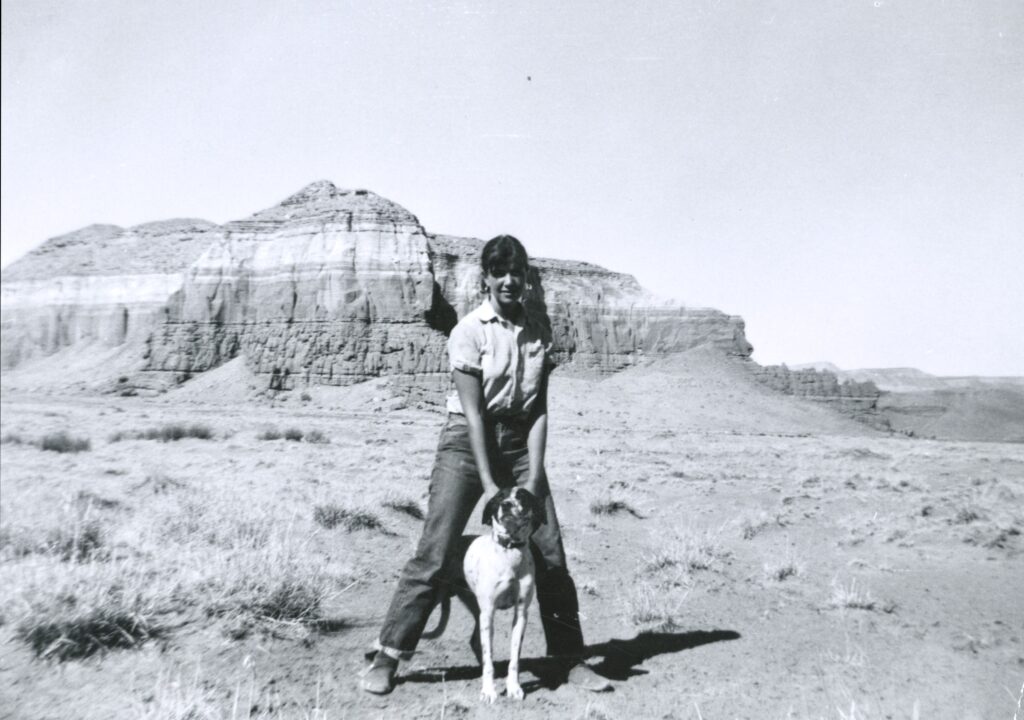 And now the well-kept secret has her own museum in Las Vegas. The curator of the Rita Deanin Abbey Art Museum, Katherine Hough, is former chief curator at the Palm Springs Art Museum and is well known in Palm Springs art and history circles.

Hough worked closely with the artist, who died in 2021. “Rita influenced her first husband, Edward Abbey, on how to perceive and look at the southwest environment through the lens of an artist,” Hough said in an email. “She was a big influence on his perceptions.”

Rita is linked to Palm Springs via a 1988 retrospective curated by Hough at the Palm Springs Art Museum. The museum has four of her works in the permanent collection, and also commissioned a limited print edition by Abbey—Spirit Mover—for their 60th anniversary.

“Rita and her second husband Robert Belliveau regularly visited our desert to hike, and Rita loved visiting Joshua Tree Park,” Hough adds. “We were great friends since the early 80s, and we’d hike with them in our desert and around Las Vegas.”

Abbey kept an intentional distance from the art world and worked in a variety of mediums, including desert abstracts. Her two major inspirations were the landscape and her Jewish heritage. 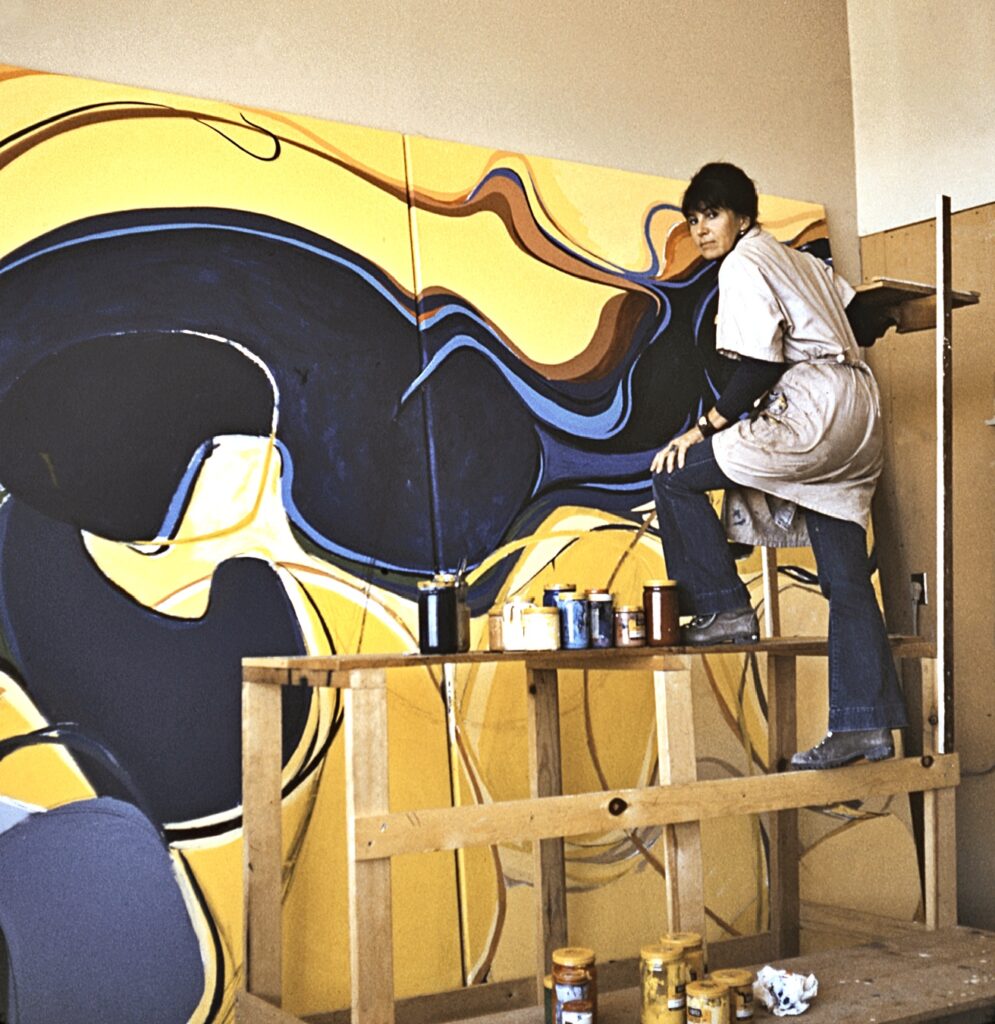 Borrego desert artist Edith Purer was honored this summer at the 50th anniversary of Miramar Mounds National Monument in San Diego. I didn’t know such a place existed, but now I want to visit the fragile and ephemeral vernal pools protected there. Wildlife biologist Chuck Black wrote to tell of the tribute: “I work on vernal pools in the same area Ms. Purer did her PhD work and our guest of honor at the celebration is 103-year-old Norris Bloomfield, who drove Ms. Purer to the vernal pools areas in 1937.” 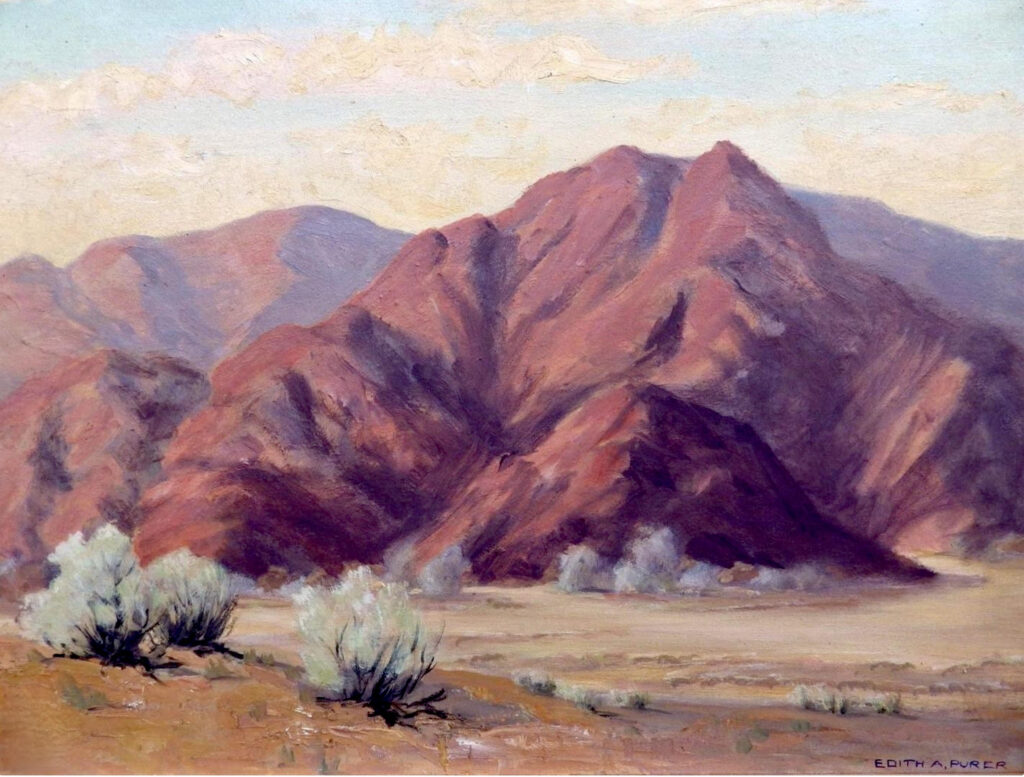 Edith A. Purer painted the Borrego desert, when she was not exploring vernal pools.

Purer, known as California’s first female ecologist, was the first to defend the nondescript little pools that appear seasonally, hosting an immense diversity of life from the fairy shrimp to coyote thistle to mesa mint. Chuck Black—he works for the Marine Corps Air Station Miramar–has become an admirer of Purer and is looking for her hard-to-find desert paintings. Contact this website if you have a lead for him.

Edith Purer illustrates the unbreakable link between the natural sciences and landscape art. It all starts in the dirt and muck and the occasional glimmer of life in a vernal pool.

The Palm Desert roadside painter Fred Chisnall was the quintessential loner in his later years. Well-loved by his painter friends, he nevertheless had a sorrowful aura and died of heartbreak. Yet Brian Utterback posted some rare family photos showing another side of his great-uncle Fred—this Fred was part of a large, loving clan. “Fred died when I was six and I couldn’t even tell you if I ever met him,” Utterback says. “I do know that we had a couple of Fred’s paintings in the hallway of our house when I was growing up, but that house was torn down nine years ago and everything in it sold off.” 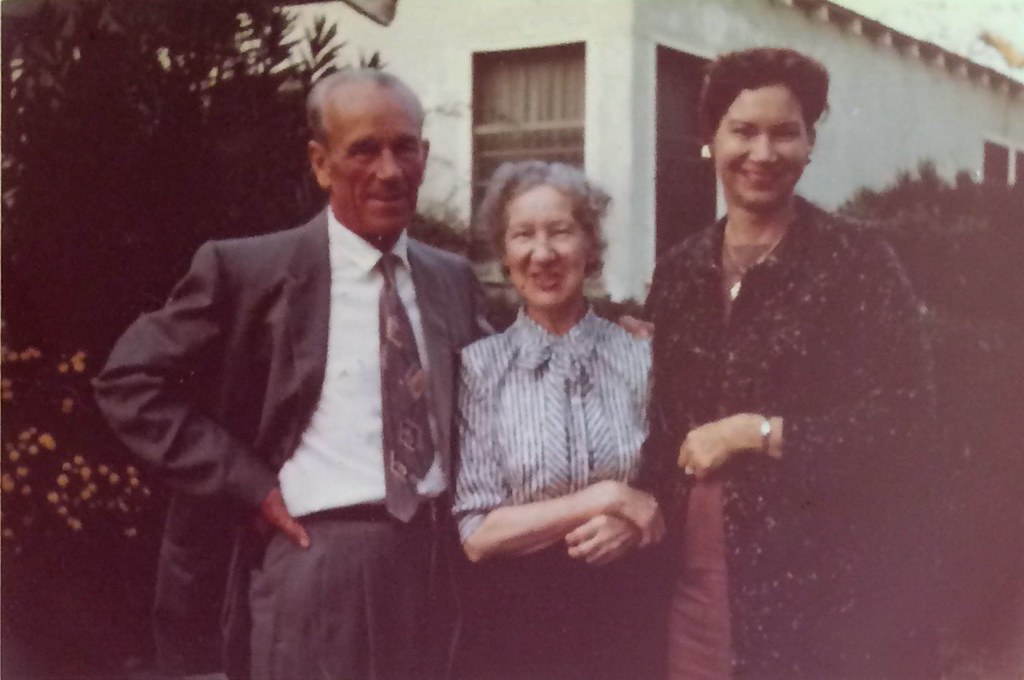 Utterback’s photo–taken at his grandmother’s house–shows Fred dolled up in a suit, posing with his sister, Lotty Buch, and Brian’s mother, Selma (Buch) Utterback. Brian’s Flickr photos show a sprawling and deeply connected family, with glimpses of Chisnall’s son, Walter. They suggest there is more to Ol’ Paint than we knew.

General George Patton seems unlikely company for TV artist Jon Gnagy, but the two are linked–online, at least–by the common interest of author Mike Province. Province grew up in a small Missouri mining town, went on to a 36-year career with the San Diego Union Tribune and subsequently began writing deep-dive books about his heroes—Patton and now Gnagy. You can read excerpts from his Gnagy book on his website (he’s founded the Jon Gnagy Historical Society), or order the book on Amazon. 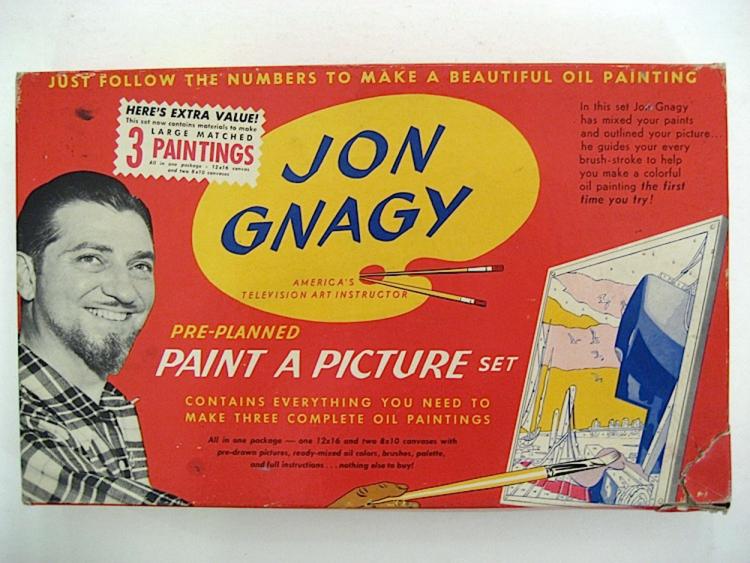 David Michaels: In the Spirit of the Old Ones

Sometimes it seems the old-fashioned desert artist is an endangered breed. Social media tends not to reward the required virtue of steadfast patience. Then along comes David Michaels, a Los Angeles-based TV sports producer and director turned “crazy, passionate” desert artist. He first met the desert on childhood trips to Las Vegas. “I was taken with the apparent vast emptiness of the Mojave and wondered what was really out there,” he said in an email. “My parents were always in a hurry to gamble so my ‘quest’ had to wait until I could drive.” 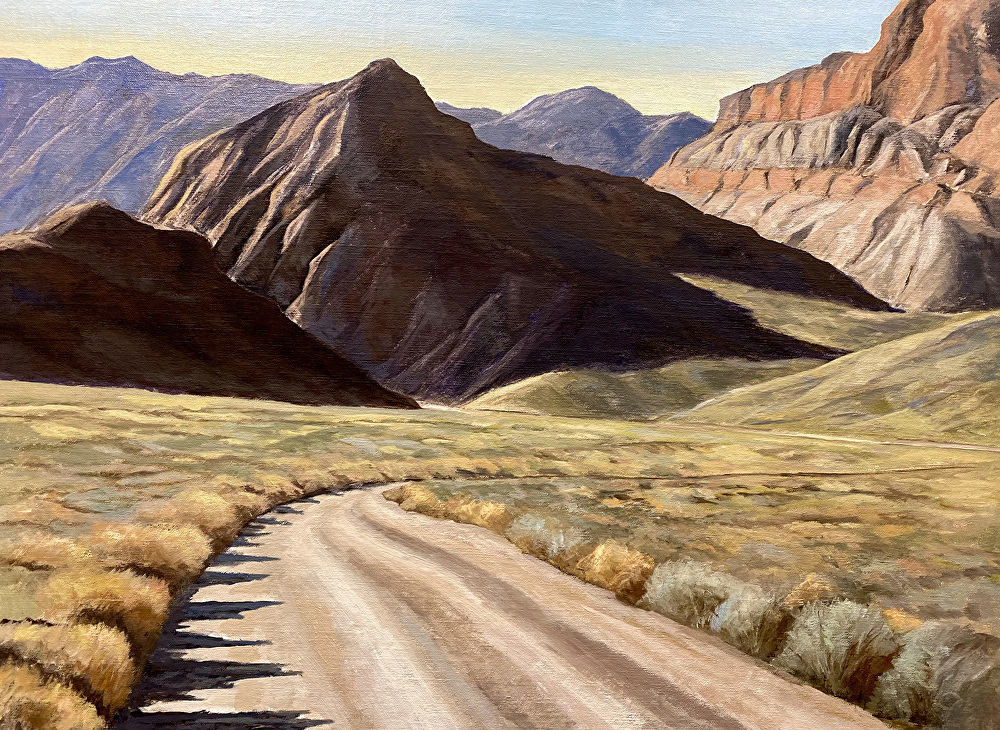 David Michaels, Road to the Back of Beyond

His work exemplifies an old-school sentimental love of hills and buttes, and the total immersion you see in all the greats. He devotedly studies Maynard Dixon, John Hilton, Victor Clyde Forsythe and Jimmy Swinnerton; instead of counting sheep at night, he imagines mixing colors. “Essentially,” he says, “I am a fanatic for magical light which colors the world, if only for brief moments, with a powerful message of hope and serenity.”

← Happy Are the Painters: How a Cocktail Waitress and a Roadside Artist Sparked a Desert Art Happening
Back to the Pleistocene: Adventures with a Forgotten Taos Modern   →