The tourists called it Tee-mah-COOL-ya, if they called it anything at all. There were only a few hundred people in Temecula in the 1960s, but located as it was halfway between the art towns of Laguna Beach and Palm Springs it was perfectly situated for a mini art explosion of its own. 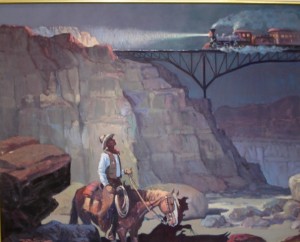 Travelers on the old three-lane highway braked when they saw a sign on a roof that read “Art Shack”. The windows of the sagging structure were filled with paintings of smoke trees and canyons; the sweet sounds of violin issued from within.

After the visitors had been charmed by Ralph Love–a beret-wearing, violin-playing ordained minister and student of Sam Hyde Harris–they naturally wandered a few blocks down the street to admire the paintings of horses and barns at The Art Stop. Here the upstart Roy Morrissey was drafting off Love’s roadside success–at Love’s invitation. “I think Ralph wanted company,” he said recently. 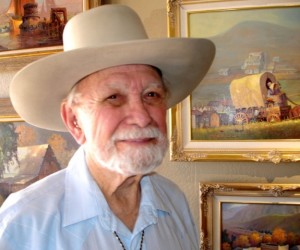 In the heyday, says Morrissey, he was making $1,200 a week–good money for an artist then. Every few minutes the cowbell rang in his studio, announcing a new guest. With the addition of Morrissey, Temecula had itself an art scene—a scene that thrives to this day in the galleries and festivals around town.

Love died in 1992. While the Art Shack is also gone, the restaurant that stands in its place, Baily’s, sports a “Love’s Courtyard” and a historical plaque recognizing the Art Shack. Love’s paintings now hang in museums and collections throughout the West. He’s known for his symphonic Grand Canyon scenes as well as the California classic trio of desert, sea and mountains.  Temecula honors the pioneer painter with its Ralph Love Plein Air Festival each year. 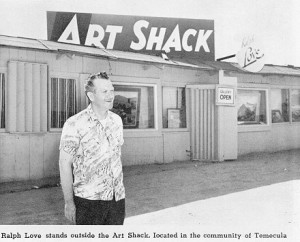 The second roadside artist, Roy Morrissey is now 85 and living in Hemet. On a recent morning I drove out to talk to him about the original Temecula art shack colony. His home was easy to spot because of the new yellow motorhome out front. Since his wife died just over a year ago, Morrissey has decided to hit the road once he can convince his black lab, Candy, to climb the steps of the motorhome. He’ll be setting off for Vermont to paint pictures of old houses.

A graduate of the California College of Arts and Crafts, Morrissey drew pictures since he was small. He started out his career doing window displays for JC Penney’s in San Francisco, then worked in illustration and advertising in Salt Lake City. He had returned to California and was teaching art at Palomar College in San Marcos 1966, when he and Ralph Love happened to be in the same art show.

When Love invited Morrissey to set up a studio in Temecula, Roy rode out on his motorcycle and saw there was not much there—just a few old Western buildings, a saloon and a cafe called the Swing Inn. Love’s Art Shack (his daughters kidded him by calling it Art’s Love Shack) was humble at best. “Let me say, if you have ever seen a shack, the Art Shack was the shack of all shacks,” Morrissey once said. Still, Ralph Love managed to persuade the younger artist. “He was like a rock star”, says daughter Lee Love Youngman of her dad’s compelling personality.

The man Morrissey called “Ralphus” was a traveling evangelist who turned his religious fervor to art and landscape when he opened his shack in 1959. His daughters Lee Youngman and Evelyn Love Norris remember painting expeditions to the deserts around Palm Springs when they were young. Youngman, a Calistoga art dealer, says their mother Bertha—also a minister–would unfurl a big blanket and the four kids would play while dad painted. On one occasion, 4-year-old Lee was stung by a scorpion. Bertha laid her hand on the child and willed away the poison, saying with conviction: “This is not going to hurt you.”

Love, an early member of the Laguna Beach Art Association, taught art classes in Palm Springs and Palm Desert. He was one of five artists commissioned to paint diorama backdrops for wildlife displays at the Living Desert.

Morrissey took up Love’s offer and set up in the old Stallion Hotel on Front Street; he later purchased a lot on the same street and hauled in a secondhand mobile home for his studio. While hanging out with “the painting preacher”, Morrissey also became a desert artist. The two traded tips with desert painters Burt Proctor, Bill Bender, Karl Albert, John Hilton, Jimmy Swinnerton and Sam Hyde Harris–Ralph Love’s one and only art teacher. Both Love and Morrissey painted covers for the High Country, a Temecula magazine, and showed at the Desert Art Center in Palm Springs. 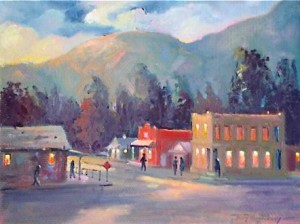 Old Temecula, by Roy Morrissey. His studio was in the building at left.

At first business was slow for Morrissey. His wife worked as a nurse and he brought in a small government stipend due to a spinal injury suffered while serving in WWII. The artist soon realized the paintings sold faster if there was a horse or barn in the mix, so Morrissey ended up adding lots of horses and barns to his landscapes. He frequently visited the hay barn on Temecula’s Roripaugh Ranch, at one time an empire of 6,500 acres of wheat, barely and alfalfa. He jokes: “I sold paintings of their barn so many times that I felt guilty and gave one of my paintings to Roripaugh.”

Morrissey left Temecula in 1978 when the town grew too big for art shacks. Collector Mark Wasserkrug of Palm Desert says the painter deserves to be as well known as his buddy, Ralph Love. “I believe he is one of those artists who didn’t get the press he needed to achieve the level of Ralph Love, Darwin Duncan and Fred Penney, all very collectible artists,” he says.

Morrissey’s subject has always been the West: Cowboys, Indians, trains, barns, shacks and the town of Tee-mah-COOL-ya. “There were cowboys right here in Temecula then,” he says. Today there are more artists than cowboys in Temecula, thanks to the colony-of-two. 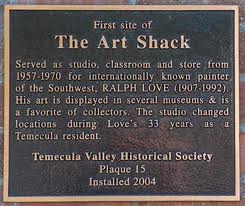 9 comments for “Ralph Love and Roy Morrissey: The Art Shacks of Temecula”