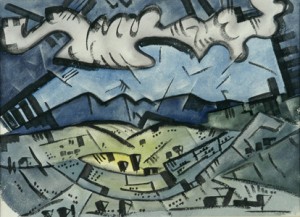 I’m no longer surprised when I hear about a hot Southwestern artist and then find he or she had ties to the Coachella Valley. In fact, I’ve come to expect those connections. The newest discovery is Henry Cady Wells, a modernist Santa Fe artist who lived in Palm Springs at one time. Georgia O’Keeffe once remarked that she and her friend Wells were the two best artists from their region. And while Wells has been relatively obscure till now, his day has come largely due to the efforts of Lois P. Rudnick, editor of a satisfying new book from the Museum of New Mexico Press: Cady Wells and Southwestern Modernism. Accompanying the book’s release is a flurry of exhibits. One opens December 17, 2010, at Aaron Payne Fine Art in Santa Fe, with a second exhibition opening January 28, 2011 at the University of New Mexico Art Museum in Albuquerque. A show of Wells’ santo collection (native New Mexican religious objects) opens January 21st at the Museum of Spanish Colonial Art in Santa Fe. 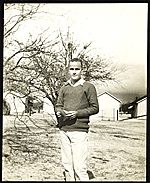 Rudnick, retired chair of the American Studies Department at the University of Massachusetts in Boston, concludes that Wells was one of the greatest Southwest modernist painters.  He was overlooked partly because he worked in watercolor, traditionally less valued than oil, and because he investigated darker themes triggered by his experiences in wartime. In addition, his career was short; he died at age 50, in 1954, of a heart attack.

Wells pushed the boundaries of traditional landscape with the aim of getting “under the skin” of the desert and mountains. He cast wide for inspiration, bringing in classical music, petroglyphs and pictographs,  Japanese calligraphy and the cubist expressionist landscapes of John Marin. Wells even brought cartography into his mix. During World War II, he’d worked with aerial topo maps in the First Army Engineering Corps. 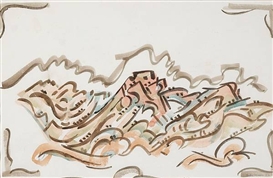 Born into wealth in an old East Coast family, Wells only felt accepted as a gay man and an artist when he moved to Santa Fe in 1933. He was quickly entrenched in the Santa Fe and Taos bohemian scenes, making friends with Mabel Dodge Luhan, Una Jeffers (wife of the poet Robinson Jeffers), and Edward Weston. He was acquainted with Ansel Adams and photographer Laura Gilpin. Rudnick says his friendship with Georgia O’Keeffe was “complex, loving and troubled.” One of his closest friends, choreographer Martha Graham, often stayed at his home in the Pojoaque Valley, two hours from Santa Fe, and shared his interest in Native American and New Mexico cultures. 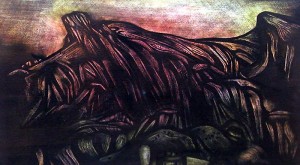 The artist first discovered the desert as a youth during a stay at an Arizona boarding school. He told a friend living in the desert was “like hearing music…The desert is such a revelation all the time.”

Later Wells painted in Death Valley (he said the sand dunes there reminded him of his six dachshunds rolling under a blanket) and lived in Palm Springs for a time. Biographer Rudnick said in an e-mail she was unable to find out much about Wells’ stay in Palm Springs—so there’s some research waiting to be tackled. In another tie to the Smoketree School, Wells had his first exhibit with Cathedral City artist Agnes Pelton (and also Raymond Jonson) at the Museum of New Mexico in 1933.

In yet another charming link to the California deserts, Wells gave a desert tortoise, Monica, to the legendary Marshal South family who lived like primitives on Ghost Mountain in Anza-Borrego Desert State Park in the 1940s. While Marshal South’s son, Rider South, says he doesn’t remember Wells, he did recall Monica and said she came to a sad end when she became wrapped in a chain while the family was away visiting at the Campbell Ranch. The multi-faceted Cady Wells was apparently a Johnny Appleseed of tortoises, as Rudnick says he also gave a tortoise to his friend Dorothy McKibben, who enlisted the animal to cart drinks on his or her back at parties.

Read Lois Rudnick’s Cady Wells and Southwestern Modernism for the good stories, but also because Cady Wells might make you look at the familiar rocks and arroyos in a totally new way. 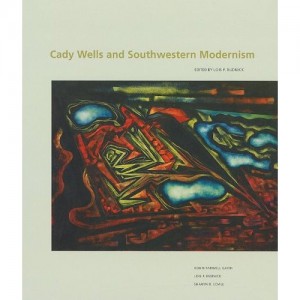 ← Ralph Love and Roy Morrissey: The Art Shacks of Temecula
An Appraiser Looks at Swinnerton →

3 comments for “Cady Wells and the Desert Modern”