Art and Theosophy at Lomaland

You don’t have to labor through Helena Blavatsky’s tomes to get a taste for Theosophy, an esoteric belief system that inspired Agnes Pelton and so many others. 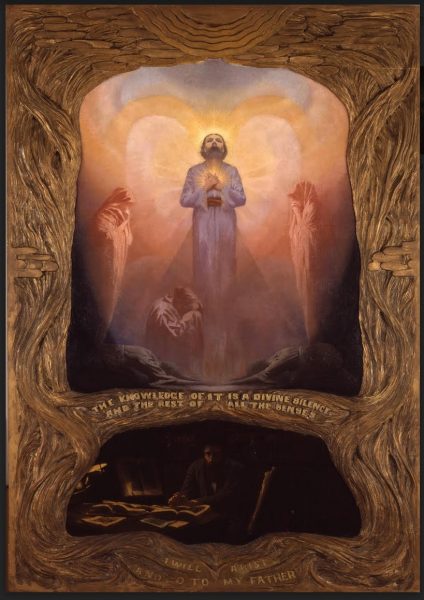 The teachings are notoriously opaque to modern minds, yet everyone can appreciate Lomaland, a romantic manifestation of the Theosophy craze. In 1897, on 120 acres of wild sagelands in San Diego’s Point Loma, workers broke ground on a school for “the revival of lost mysteries of antiquity.” At the commune’s peak, some 500 people (with many artists among them) lived in The White City, as it was called.

The utopian experiment that reshaped San Diego’s cultural landscape also infiltrated the desert. Many of the Lomaland artists–Maurice Braun, Kurt Reineman, Grace Betts, Amy Difley Brown–traveled the backcountry to Borrego Springs to paint desert landscapes. Theosophy, some say, jump-started all of modern art, given its appeal to trend-setting artists such as Wassily Kandinsky.

Many people in the Valley know Barbara Keedy Eastes as a living representative of Palm Desert history. Eastes’ father opened Keedy’s Fountain and Grill in 1957. What people don’t know, however, is that Barbara’s ceiling is also a piece of desert history.

The house where Warren Eastes (Barbara’s husband) grew up was built in 1947 [1927, corrected by Barbara –ed] on forty acres, across from the Polo grounds in Indio. It was known as the Robasan Ranch. Robason (first name unknown), an Army officer and friend of General George Patton, was incapacitated by an illness and hired a live-in nurse. In her free hours, the nurse set up ladders and boards and began painting the underside of the ceiling with Hopi and Navajo designs. The Eastes family bought the house in 1954 and Warren and Barbara later lived under the enchanted ceiling after they were married.

It’s a bounteous season for desert folk art. An unparalleled display of found objects–old gas pumps, bar stools, coke machines and more–was auctioned off last weekend as the entire town of Desert Center was dismantled prior to being sold. Among the big scores was the landmark Desert Center sign, a beacon to generations of parched travelers.

Founded in 1915 by Desert Steve Ragsdale, Desert Center is one of the most historic burgs in the region. The auction marks a mournful day for desert history fans. We can only hope that someone is building a museum and will put the town  back together. To see sold items:

Agnes Pelton’s relative Nyna Dolby is looking for some abstractions of the artist’s that have been identified in Pelton’s personal photos but have never been found in 3D. She writes:

“As I was going through things from my mother’s home I found among dozens of boxes of slides, a box that had resealed itself through neglect. When I ripped it open, I found dozens of slides of paintings that were clearly done by Agnes. I recognized a number of them from the current Agnes exhibit. But several were new to me. I sent notes to Michael Zakian and Michael Kelley to tell them about my find. They responded with remarkable enthusiasm and identified several of the images as paintings that were described in Agnes’ journals but that had never been found. At their prompting, I have been digging though family papers and family history to maybe track what happened to the paintings. I am praying for a miracle to unearth the missing abstractions that we now know existed at the time of her death.”

If you have an Agnes Pelton abstraction on your wall and think it might be one of the missing set, please get in touch via the contact page on this website and I’ll forward your info to Nyna Dolby.

After writing about the Araby rock houses, I’ve had stone huts on my radar. So I took note a few months ago when an Old Houses website featured a run-down rock house for sale in Desert Hot Springs. I asked Cabot’s Museum historian Judy Gigante if she knew who built it.  She didn’t but she was intrigued as well, and passed the question on to Marge Snell of the DHS Historical Society. This is how serendipity works in local history circles. 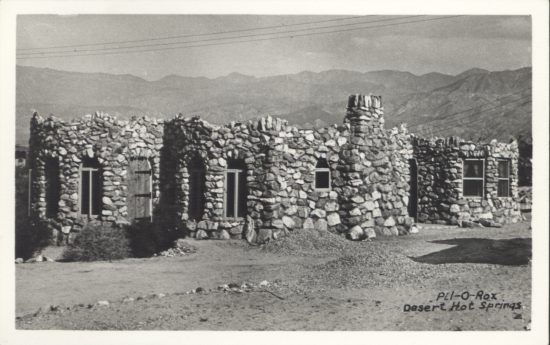 “I immediately called Breanna Sewell, Realtor and Historical Society member and she took us up to see the home,” Snell explained. “Another realtor bought it before we could, but contacting him, he was willing to flip it with a quick claim deed to us to preserve it historically and he is happy we are preserving it.  We contacted him before he made any changes in it and so it is in wonderful original condition.

“We have been doing a lot of research and from old Desert Sun articles have found out that Lee Watkins was the designer and built it entirely on his own single-handedly. He also built every single piece of furniture out of cholla cactus.  The home became a real place of interest in the desert, so much that he kept a guest book to record all who visited.”

The house is on its way to becoming Historical Society headquarters and a local  landmark folk art environment, kin to Cabot’s Pueblo. As a crew works to convert the house into a museum and event space, Marge Snell has been working on the application for designating it a historic site. She believes Watkins and Cabot had to know each other, as the Pueblo dates to 1941 and the Rock House to 1944-46.

Learn more about the plans for this newly discovered pride of DHS at the Historical Society’s annual luncheon, Sunday December 8, 2019, 2 pm, at the B-Bar-Ranch. For info and reservations: https://www.dhshistoricalsociety.org/

Diego Rivera in the Desert

A historian for the San Francisco-based Diego Rivera Mural Project, William Maynez is looking for any confirmation that Rivera might have spent time in Palm Springs. A celebrated figure in 20th century art, Rivera was once married to Frida Kahlo.

“Frida had gone back to Mexico early in mid-May 1931 to start her affair with photographer Nick Muray, so Diego was alone and had an extra week unaccounted for. He reportedly had an adventure with tennis star Helen Wills Moody in SF and I have thought possibly they reconnected in Palm Springs. For years the La Quinta Resort used to imply that Diego frequently stayed there.”

If you have information on Diego Rivera in the desert, contact William Maynez: wmaynez@ccsf.edu. Read about the mural project Maynez is working on for the San Francisco Museum of Modern Art here: www.riveramural.org

A Transcendental Gift to the New Mexico Museum of Art

A couple with Coachella Valley ties, the late William Dailey and Dr. Nicole Panter Dailey, recently made a spectacular gift of eight paintings to the New Mexico Museum of Art. The paintings are by members of the Transcendental Painting Group once based in Taos, NM, with an outlier–Agnes Pelton–based in Cathedral City.

I knew Bill Dailey as a rare book dealer, a fan of early desert books and a spa owner in Desert Hot Springs. He was tragically killed in a pedestrian accident in 2017. Nicole Panter Dailey—a psychologist and professor of film at the California Insititute of Arts—grew up in Palm Springs and was a dignitary of the early LA punk rock scene, managing the band The Germs. 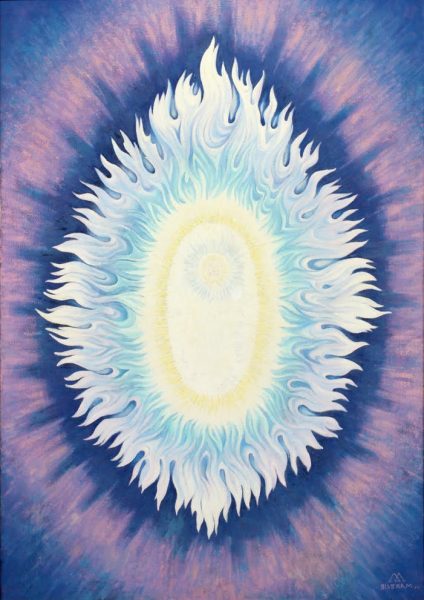 Emil James Bisttram, The Flaming One, 1964. Gift to the New Mexico Museum of Art from William Dailey and Nicole Panter Dailey.

When Bill Dailey was only 22, he traveled west from Indiana to have his  astrological chart done by Dane Rudhyar, a student of Theosophy and a key member of the TPG group. Dailey acquired a pencil sketch from Rudhyar and proceeded to collect other TPG paintings, a tradition he and Nicole continued after they met. “The only thing that makes life without Bill bearable is that I am able to do good with the resources he left to me,” Nicole said in an email. “Bill and I agreed that the paintings needed to be repatriated to New Mexico, but we didn’t get much further than that before he was killed. I did a lot of research and feel this is the exact right place for the work.”

Some of the couple’s paintings will appear in a forthcoming exhibition on the Transcendental Painting Group; details will appear on this website when they’re available.

Painter Freda Marshall lived on aviator Jacqueline Cochran‘s ranch in Indio, and was friends with Amelia Earhart. Claudia Remington, of West Jordan, Utah, inherited a Marshall painting with a note on the back that reads: My Desert. To Mr. Odlum. Floyd Odlum, Cochran’s husband, helped finance Amelia’s flights. The painting is thus a direct link to desert history as well as aviation history.

Ever since Rita Collier wrote Carl Zimmerman: A Granddaughter’s Quest for an Early Desert Painter she has occasionally heard from readers who own one of her grandfather’s paintings. A bigger prize came through, though, when a woman from Silver Star, Montana contacted Collier and said she had the circa 1915 carved mantel shown in the story. 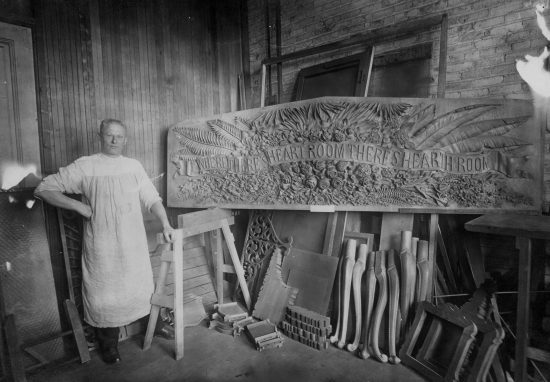 Carl Zimmerman with his carved mantel.

Along with painting Palm Springs as early as 1924, Zimmerman was a woodcarver in LA; he made the ornate mantel for a wealthy client in Pasadena. It disappeared when the house was torn down. Collier writes:

“Marilyn Dale and granddaughter Shannon Dale contacted me and wanted to know if I would like to have it. They were trying to figure out what to do with Lloyd Harkins’ [Marilyn’s father] monumental collection of mining equipment and other large items. At the time I was communicating with them, they could not actually access the mantel because it was wedged in among huge pieces of mining equipment in one of several warehouses on his ranch. I told them my son would be interested, but had no way to get such a large item to San Diego. I think they actually would have given it to me, if I could have arranged to somehow extricate it and ship it to San Diego.”

A 12-foot mantel–like Barbara Eastes’ ceiling–is an unwieldy piece of art. Collier lives in a high rise in San Diego and has no logical place to put the creation. Perhaps a fan of Big Art will one day bring it home.

Palm Springs artist Barbara Gothard‘s painting Renge 9 has been accepted for the 2019 Artists Council Exhibition at The Palm Springs Art Museum in Palm Desert November 7-22, 2019. Profiled here in 2017, she continues to define desert art for herself, incorporating elements of the environment, surrealism, dreams and the unconscious. The title, Renge, means Lotus and is inspired by Gothard’s intensive study of Buddhism. 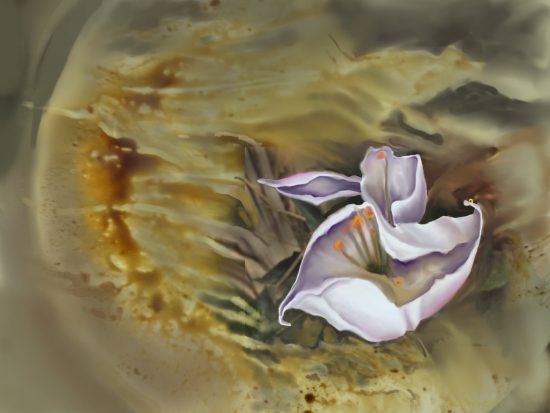