Ed. Note: Rita Collier shares her intrepid hunt for facts about her grandfather, a desert painter of the 1920s and 30s. While not all quests are this fruitful, Collier’s tale shows what can happen when you start looking. In the best cases, you can actually write an artist back into history.

Even though my grandfather, Carl Zimmerman (1870-1947), enjoyed camping and painting in other classic locations visited by the plein air painters of his era,  he had a particular love for the desert. One of his letters, written from Laguna Beach, mentions that he found it a chilly place to live during the winter and longed to make a trip to Palm Springs whose warmth better suited him. 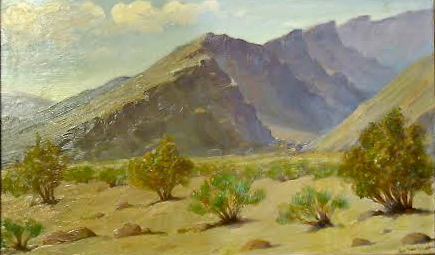 Starting in about 1924, he painted many scenes around Palm Springs such as Tahquitz Canyon, Dry Falls (Tachevah) and Andreas Canyon. His 1933 Tahquitz painting appeared in Desertscapes – Early California Desert Painters, an  exhibition held at the College of the Desert in April 2010.

As a very young child I was occasionally taken to visit his Laguna Beach home/studio on the Coast Highway. I remember being fascinated by the many dabs of colored oil paint on his artist’s palette and by a pair of small wooden shoes with my initials on them that he carved for me. 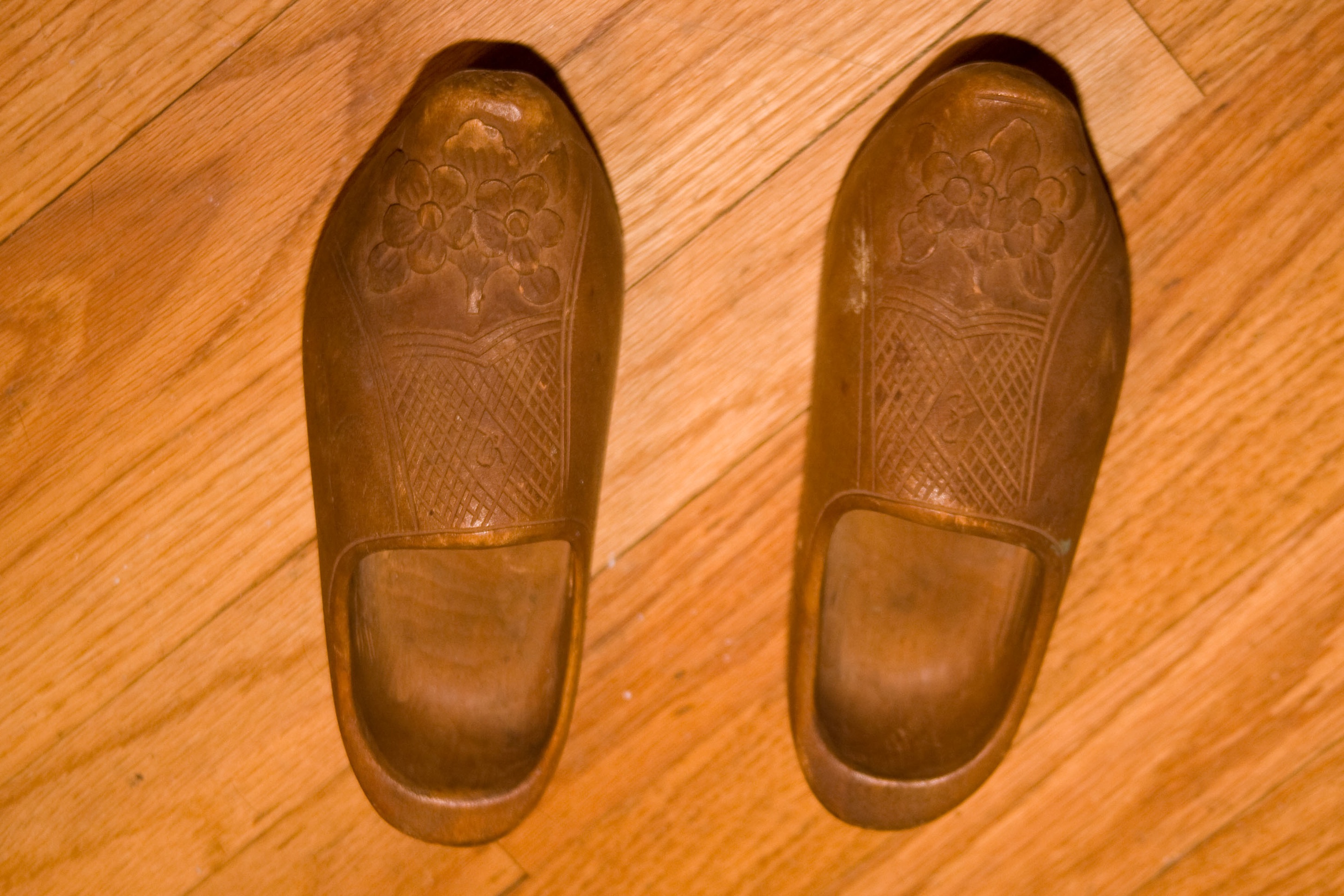 Carl Zimmerman carved these shoes for his granddaughter, Rita.

His principle occupation was that of a very skilled woodcarver and he made his frames himself. I’m told he earned more money as a woodcarver than as a painter. His business form says: “Woodcarver, Interior, Fine Furniture, Lighting Fixtures, Ornamental Patterns, Models, Designs” and then in smaller print below that, “Sketches in Watercolors, Decorative Paintings in Oil.” I’ve never seen any of the watercolors. 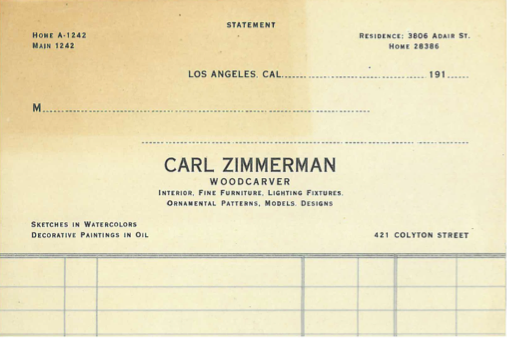 Trained in Austria as a woodcarver and painter, he immigrated to the United States in 1906. He was then 36 years old and may have initially intended to work in Northern California. However, by the time his only American child (my father) was born in 1910, Carl was well established in Los Angeles.

I suspected he first went to San Francisco because of work available after the 1906 earthquake. That guess was finally confirmed in a Nov. 3, 1936 article from the South Coast News: “Chooses Laguna as Home Because of Love of Art.” 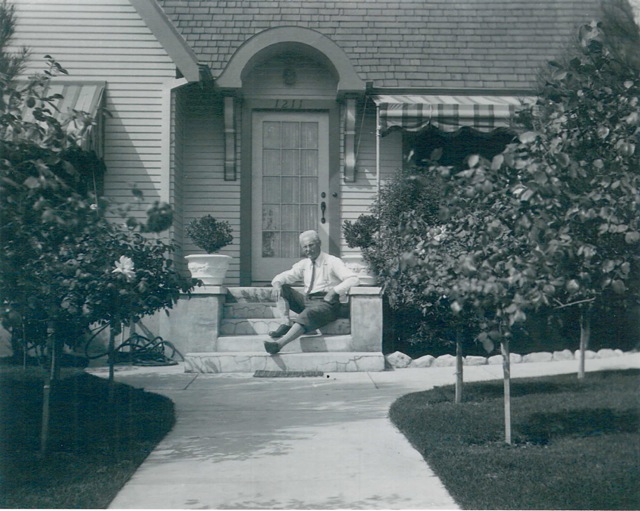 He lived and worked in both Pasadena and then Laguna Beach. My mother mentioned to me that he had friends who ran a hotel in Palm Springs. Apparently, while visiting the hotel in the 1920s he painted desert scenes which were then displayed and sold through the hotel. I have not been able to find the name of the hotel or its owners but I suspect that they were also Austrian immigrants. Was this possibly the Desert Inn? Any suggestions are welcome.

My real hunt for CZ (as I call him) began when my father died some years ago and I began clearing out his apartment in Northern California. I started finding little bits of information on Carl, and one large painting in poor condition, neither signed nor dated.

More recently I rediscovered a box with dozens, if not hundreds, of letters from CZ to his son (my father) and other family members. Unfortunately, the oldest ones are in old style German script, and many are in German, a language I do not know. However, there are also several dozen in English written by CZ (from 1927 to 1945) to his only California born son, my father.

In a letter dated Feb. 17, 1940, CZ writes, “It will interest you that I have again sold a Desert painting, Spring in the Desert, a 28 x 38 oil to a Dentist, retired, at Portland. He paid for the picture but left it with me for a while until he comes back from a trip to the Desert. This money comes in handy for the taxes, second half, next April.”

Tips about where to look for more information came from notes, letters, and other ephemera I found in my father’s chaotic apartment after he died. Over the years my father had also sent me various packets with odds and ends of information when he moved from place to place. He lived in various places all over the country and even overseas – although he started and ended life in California. We didn’t see each other for years at a time. 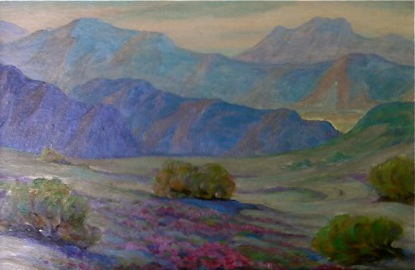 The hunt became even more compelling when I discovered that many works that were clearly by my grandfather were being attributed to the Cincinnati artist, Carl John Zimmerman. Now my job included setting the record straight regarding the mistaken identities.  For instance, I contacted the John Moran Auction House in Pasadena and they now agree with me that a painting they sold some years ago and attributed to Carl John Zimmerman is really my grandfather Carl Zimmerman.

My search led to exchanges with dealers and collectors as far away as Australia, into many obscure archives and even to a visit with the renowned California art collector and dealer Edan Hughes. Anyone can start such a search by using Google and eBay and inquiring with archivists.

My finds included a 1933 review in the Los Angeles Times in which Arthur Miller said my grandfather’s Tahquitz Canyon painting had “real charm and truth”. I found a catalogue for an art exhibit at the 1938 California State Fair, at which my grandfather displayed his work alongside paintings by Maurice Braun, William Wendt and Millard Sheets. 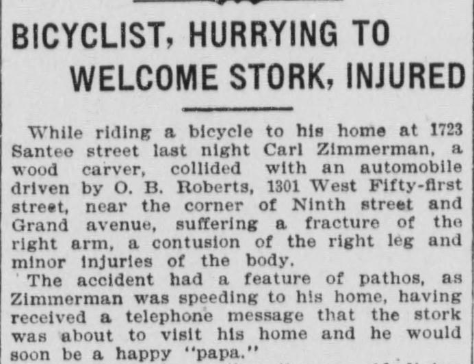 In an April, 1910, edition of the LA Herald, I found a small item in which “Carl Zimmerman, wood carver, collided with a automobile.” Then in a CZ letter of 1942 to his son, I found a reference to that same accident:

Next week it will be 32 years since you were born in that small rear house on Santee Street Los Angeles. I remember it so clear if it would have happened yesterday! I stood there – with my right arm in a sling – for the day before – I was knocked down by a speeding motor cycle. Things looked quite gloomy for us – the arm was fractured – the chance to go to work again might take months – and then still dangerous – we wood carvers use the mallet in our right hand. There was only a small savings account in the bank. But it turned out not so bad as we imagined; in three months – we could start all over again.

A useful source was Nancy Dustin Wall Moure’s “Index to Articles on California Art and Artists Found in Newspapers Published in Laguna Beach, Hollywood and Pasadena”. Moure, a renowned California art historian and curator, steered me to South Coast News articles about CZ. This in turn led me to the Orange County Archives. While not all archivists or contacts are helpful, the OC Archives came through for me big time.

I discovered that prior to 1920 Carl Zimmerman had a woodworking workshop at 421 Coylton Street, Los Angeles, in a building that I think is still there (per the “street view” shown by Google Maps for that address). I believe that is where he is shown in the attached photo with a commissioned mantel piece probably carved between 1916 and 1920.

He carved this very ornate mantel for a wealthy client who installed it in two successive Pasadena residences. I tried to track down that mantel a few years ago but Pasadena Heritage told me those particular houses, built in 1921 and 1928, had been torn down. They were on the Hotel Vista del Arroyo site. 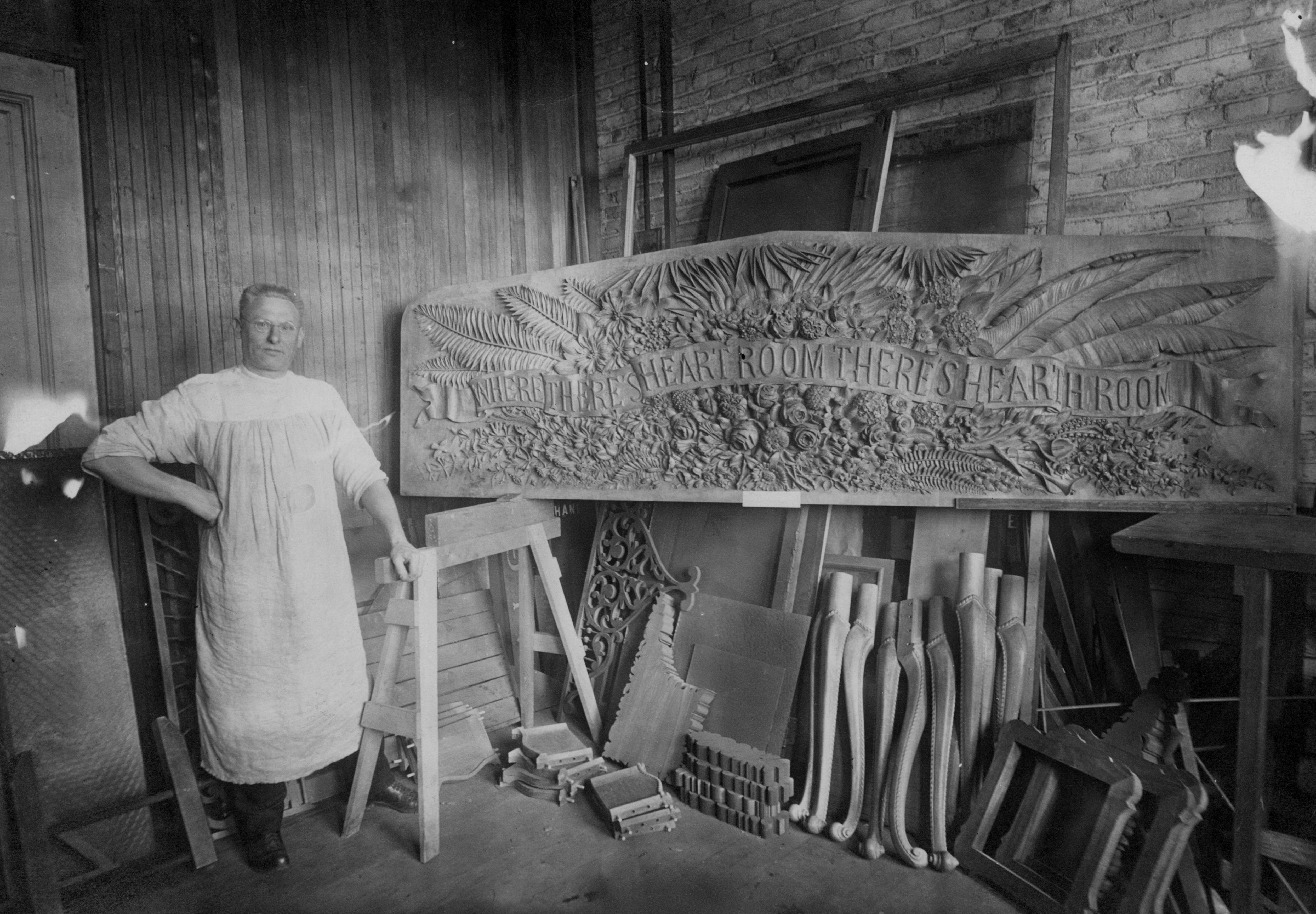 Carl Zimmerman in his LA studio, with a commissioned mantel piece.

By the mid 1920’s the Zimmermans relocated to a newly built home in Pasadena from which Carl had ample opportunity to work on architectural carvings for the interiors of fine buildings, to paint views of the nearby Arroyo Seco, and to make visits to the Palm Springs area.

I continued my search with a visit to Edan Hughes at his townhouse in the Mission District of San Francisco. Hughes is the author of the definitive guide to California art: Artists in California, 1786-1940.  I wanted to see a large CZ painting he had listed on his website. He had been in poor health – unfortunately– and seemed subdued in his conversation. But he was gracious during our visit. 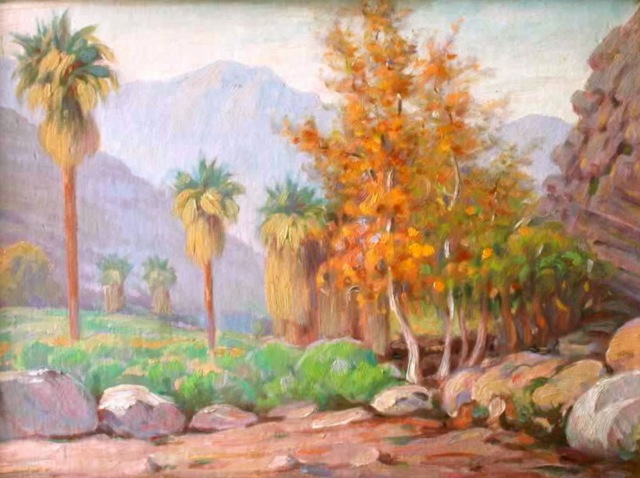 His town house is absolutely crammed with paintings on all the visible walls. From what I could see down the hall there were additional rooms that had floor to ceiling racks of paintings. Although he has a very small CZ, it wasn’t out for me to see. I was pleased to hear Hughes comment that he thought my grandfather’s paintings were underappreciated.

In 1936 Carl Zimmerman moved with his Austrian-born daughter (who immigrated in 1932) to the artists’ community of Laguna Beach where he lived until his death in 1947. Early snapshots taken of his home at 1130 North (Pacific) Coast Highway show paintings hung on its exterior – undoubtedly because the home was well situated for catching the attention of potential buyers passing by. 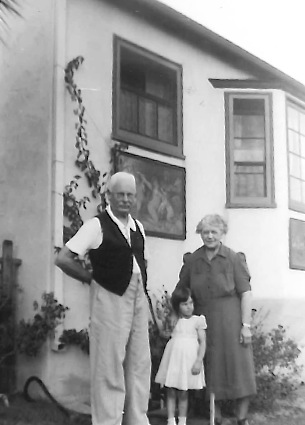 Today I know a lot more about my grandfather and I also have five of his paintings — three of them small sketches on board and two larger ones on canvas. One was done on a visit to Switzerland in 1925, but all the others were painted in Southern California.

Although my search has been long, I believe there are many more Carl Zimmerman desert paintings yet to be rediscovered. Can you help me find them?

Rita Zimmerman Collier lives in San Diego with her husband of many years, a Professor of Biology (now retired), who like her is a native born Californian. If you have clues for Rita, please leave a comment below or send an email to annjapenga@gmail.com, to be forwarded to her. 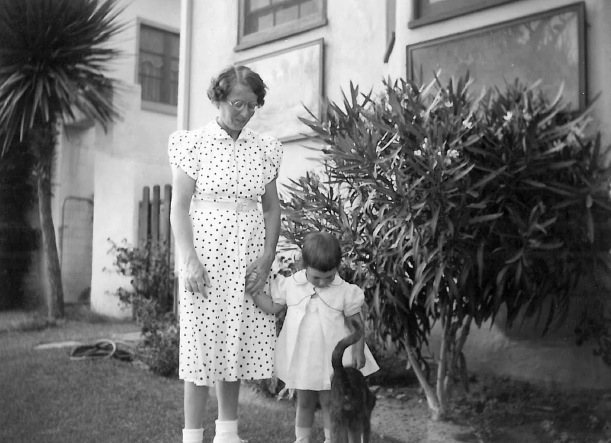 11 comments for “Carl Zimmerman: A Granddaughter’s Quest for an Early Desert Painter”