When a fox named Fresno encounters three border-crossing foxes from Mexico, they all wind up partying at a palm oasis–in a series of enchanting illustrations by British-born artist Anthony W. Parr. “A fox knows no borders, just how to have a good time in the desert,” proclaims this parable, available now on Amazon in English and Spanish. 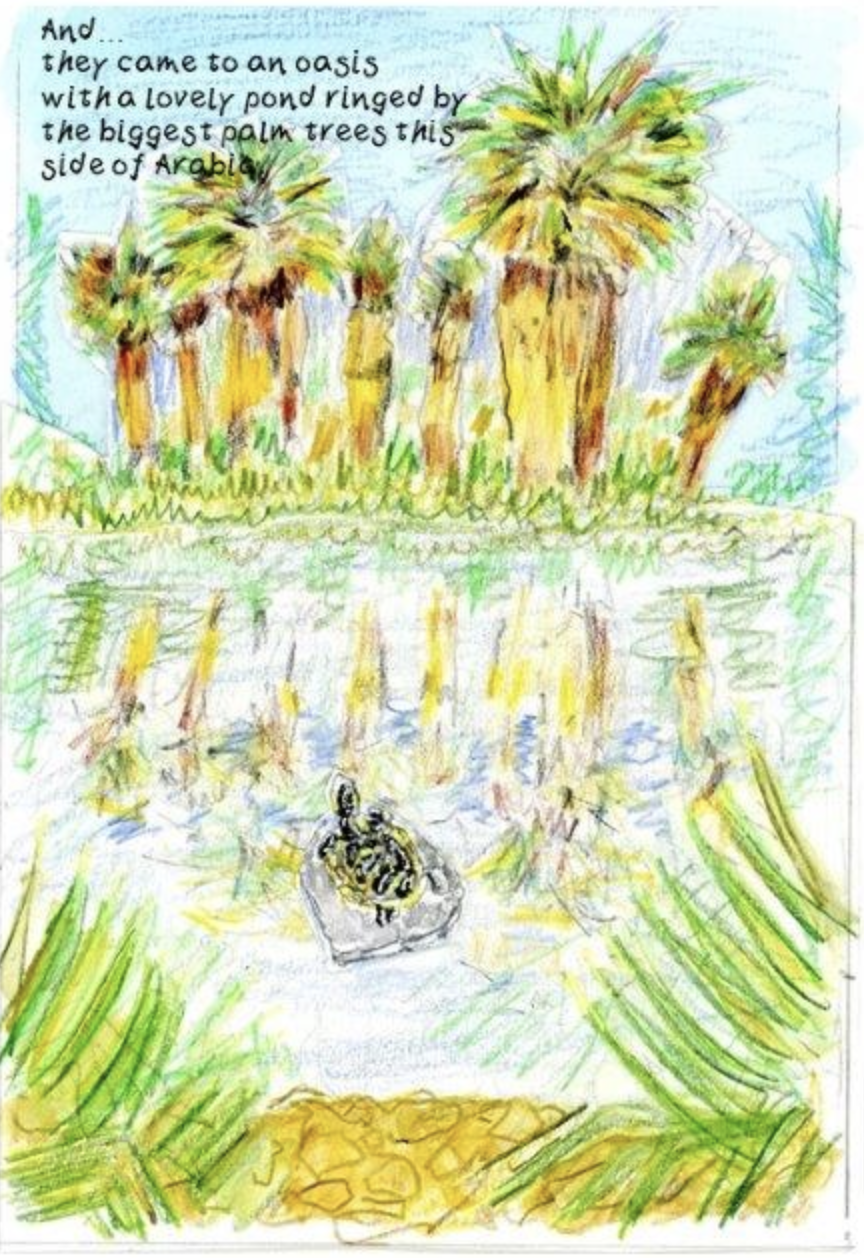 Parr’s first book, Somewhere Near Casa Grande, shows his talent as a desert artist who has extensively hiked and painted near his part-time home in Palm Desert (he lives the rest of the year in Bellevue, Washington), as well as the backcountry near Tucson where his tale is set. Parr worked in the aerospace industry and now has his own company manufacturing computer-controlled  machines. But he’s also a stealth plein air artist who has taken classes with Elaine Mathews locally. The book was inspired by his daughter Kristina Parr (“Why don’t you write about foxes?”) and is the first of several from his own Ginkgo Leaf Publishing company.

Parr tells readers of California Desert Art that he will send a free copy to teachers or anyone wishing to learn the fate of the furry comrades.

Each year about this time Elaine Mathews unfurls her list of destinations for the season’s paint-outs–open-air fests for the free-spirited. The Desert Art Center, sponsor of the paint-outs, is closed until January, 2021, but Elaine and her co-host Andrew Gillespie are forging ahead on these dates:

Since Elaine won’t be teaching her usual Tuesday class, she says: “I will probably (weather willing) get out early and paint with anyone willing to join me.” Contact her if you want to go along on Tuesdays or on the paint-outs: elaineartist@yahoo.com 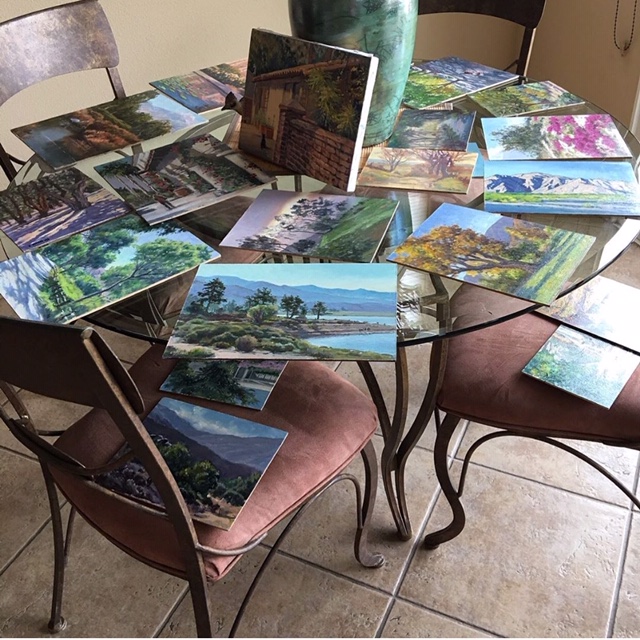 Elaine Mathews’ table: “What happens when you stay home too much.”

A few years ago Ann Tompkins found a stash of 900 letters and cards exchanged between Paul Grimm and her parents. Now in a similar find, a series of cards and letters discovered by Timothy Long establishes that Palm Springs’ best-known painter excelled at friendship. Long says the Grimms were friends of his great uncle and aunt, Ed and Maude Pilkington, during the years Ed and Paul worked at MGM in the 1920s, until the time his aunt and uncle passed away. 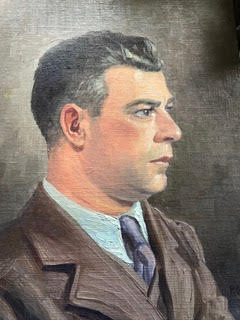 “Both couples were childless and spent quite a bit of time together,” says Long, who lives in Chula Vista. Among the items is a portrait of his uncle, Ed. Researchers who are studying the decline in modern friendship could make a case study of the Grimms, who made friends for life and left a historic record.

There’s an ancient, dependable rhythm to desert painting that endures even in a pandemic–walking, looking, sketching, walking some more. Here’s what some of our local heroes have been up to:

Mark Kerckhoff avoids elaborate artist statements, calling himself a Chauncey Gardner (the simple-minded hero of Being There) when it comes to verbiage. 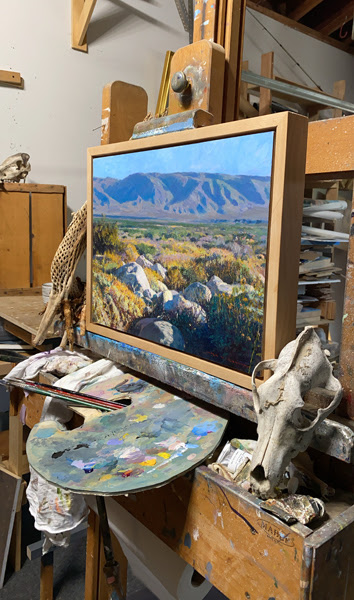 He will say only that this majestic new painting of the Banning Pass–a place being ravaged by fire as I write this–is about “visual pathways through the seen out to the distance.” Pretty good for a Chauncey Gardner.

Juliette Vos is back in the Netherlands where she lives most of the year, but as always she spent the springtime in Palm Springs. The riveting work here, Theotokos, started as a “grizzly bear ghost painting” but then morphed into the Virgin Mary (Theotokos are religious icons of Mary.) “I have reimagined the Virgin and the grizzly ghost together as one, lit by candle light and shimmering in gold,” Voss says. 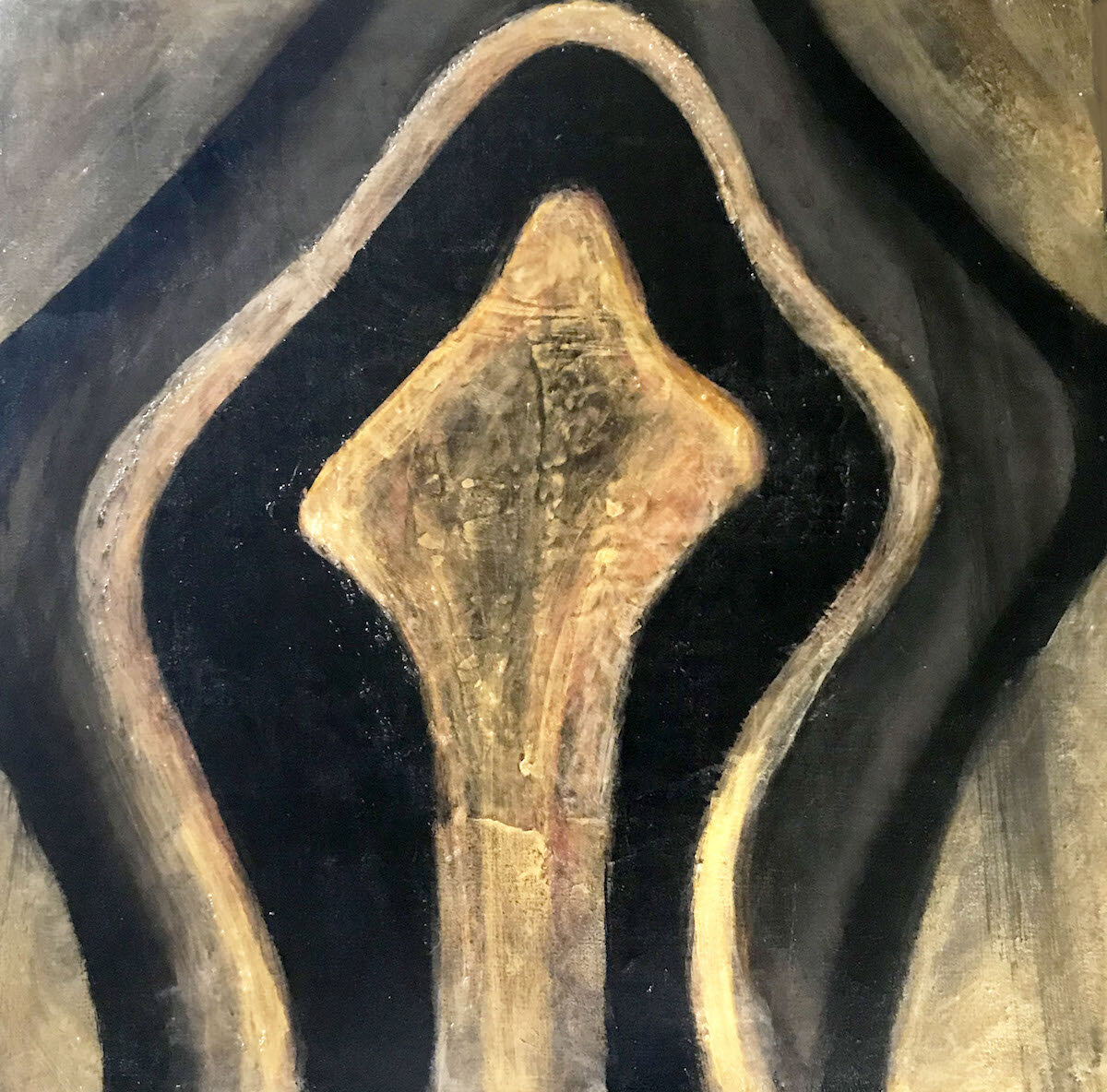 For her next visit to the desert, she has in mind a “fairly grand scheme. I am planning to ‘wrap’ the Valley in a visual sense. I am hoping to obtain photographic imagery of the entirety of the Coachella Valley then–using four color separation–screen print large (really large) artistically rendered images on paper or perhaps aluminum.”

When his spring show was delayed, Wonder Valley artist David Greene spent the time binging on videos of the old masters, learning about glazing and grisaille. “With the lockdown, I was able to put that all to good use–having the time for layers of glaze to dry instead of rushing to the finish line,” he says. 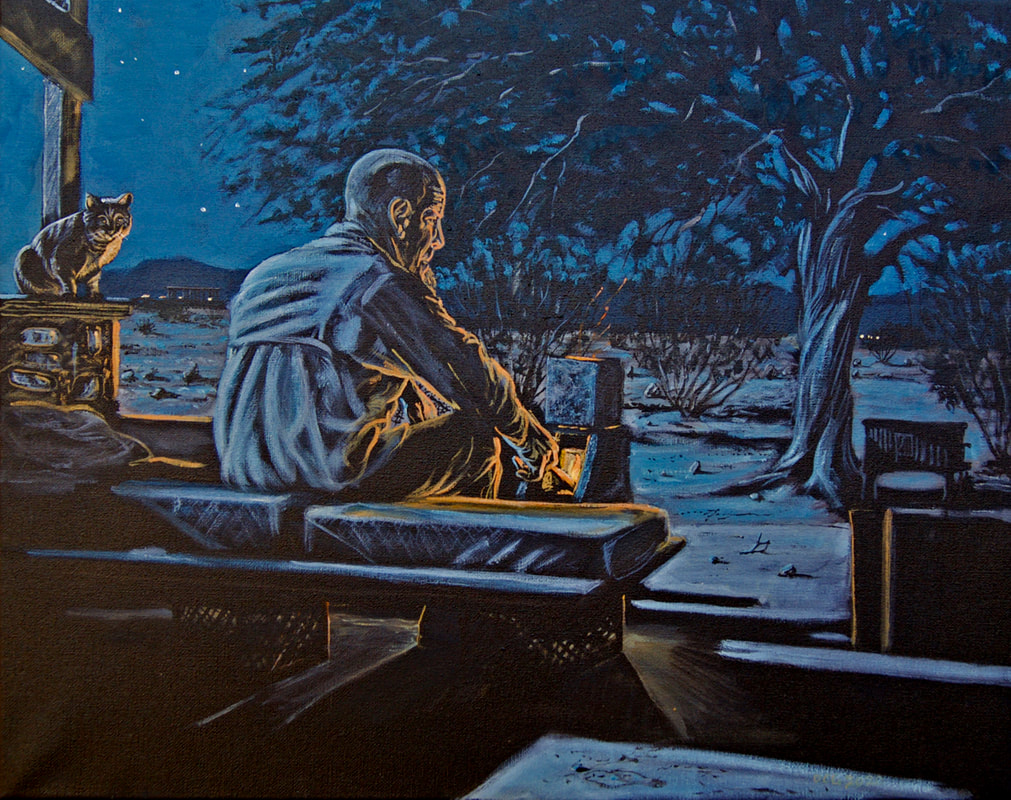 Known for his nighttime landscapes of the Joshua Tree desert, Greene has made big leaps in his new work, on view at the 29 Palms Art Gallery in October, 2020. His latest Mojave Noir show is subtitled: A Decade In the Dark. A major new triptych to be unveiled is a tribute to his mentor, James Beoddy, of Columbus, Ohio–Greene’s home turf.

On Saturday Oct. 17, 2020 the artist will teach a workshop on creating nighttime works of art.

Eric Merrell was working on pieces started during a residency at Mojave National Preserve–for a show at Kelso Visitor Center–but since the visitor center closed he switched to printmaking, most recently a Zzyzx print that has the indubitable Merrell stamp. https://www.ericmerrell.com/prints

He also has a new show–Oblique Land–open now through October 4, 2020, (by appointment) at Tenderfoot Projects, a new gallery in Yucca Valley. The work reflects Cabot Yerxa’s maxim: “The first rule of the desert is quietness.”

People who appreciate Jimmy Swinnerton are generally not the same people who grok Desert X. One desert resident who nimbly crosses the traditional/contemporary divide is Steven Biller, editor-in-chief of Palm Springs Life magazine. It was from Steven that I first heard the name “John Frost” and he is also on the board of the trendy biennial Desert X. Learn how the old and new worlds collide and sometimes coalesce in Biller’s day-long class: The Art History of the Coachella Valley. The October 25, 2020, class starts at the Living Desert and moves on to the studio of Phillip K. Smith III in Palm Desert and then proceeds to Armando Lerma’s studio in Coachella. Sponsored by the Desert Institute at Joshua Tree National Park.

Palm Springs native Nicole Panter Dailey–a noted LA punk rocker and later a film professor and psychologist–now adds arts writer to her résumé. In the winter edition of the New Mexico Museum of Art’s magazine, El Palacio, Dailey drew on her background in psychology to explore Pelton’s work, arguing that Pelton’s art is the product of childhood trauma, including “the inherited trauma of a disastrous family narrative.” Dailey got acquainted with the Transcendental Painting Group (Pelton was a member) when she and her late spouse, William Dailey, donated eight works by the group to the New Mexico Museum of Art. 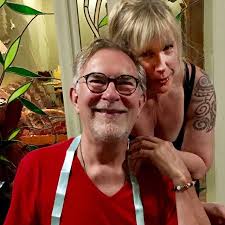 For fans who might have missed this significant contribution to Peltonia, the link is below. The major Agnes Pelton exhibition organized by the Phoenix Art Museum has reopened at the Whitney Museum and comes to the Palm Springs Art Museum in November, 2020.

It’s bad enough to be forgotten by history, but to have your decades-late comeback interrupted by a pandemic… This happened in the case of Agnes Pelton, of course; another casualty is pioneering Arizona artist Effie Anderson Smith. 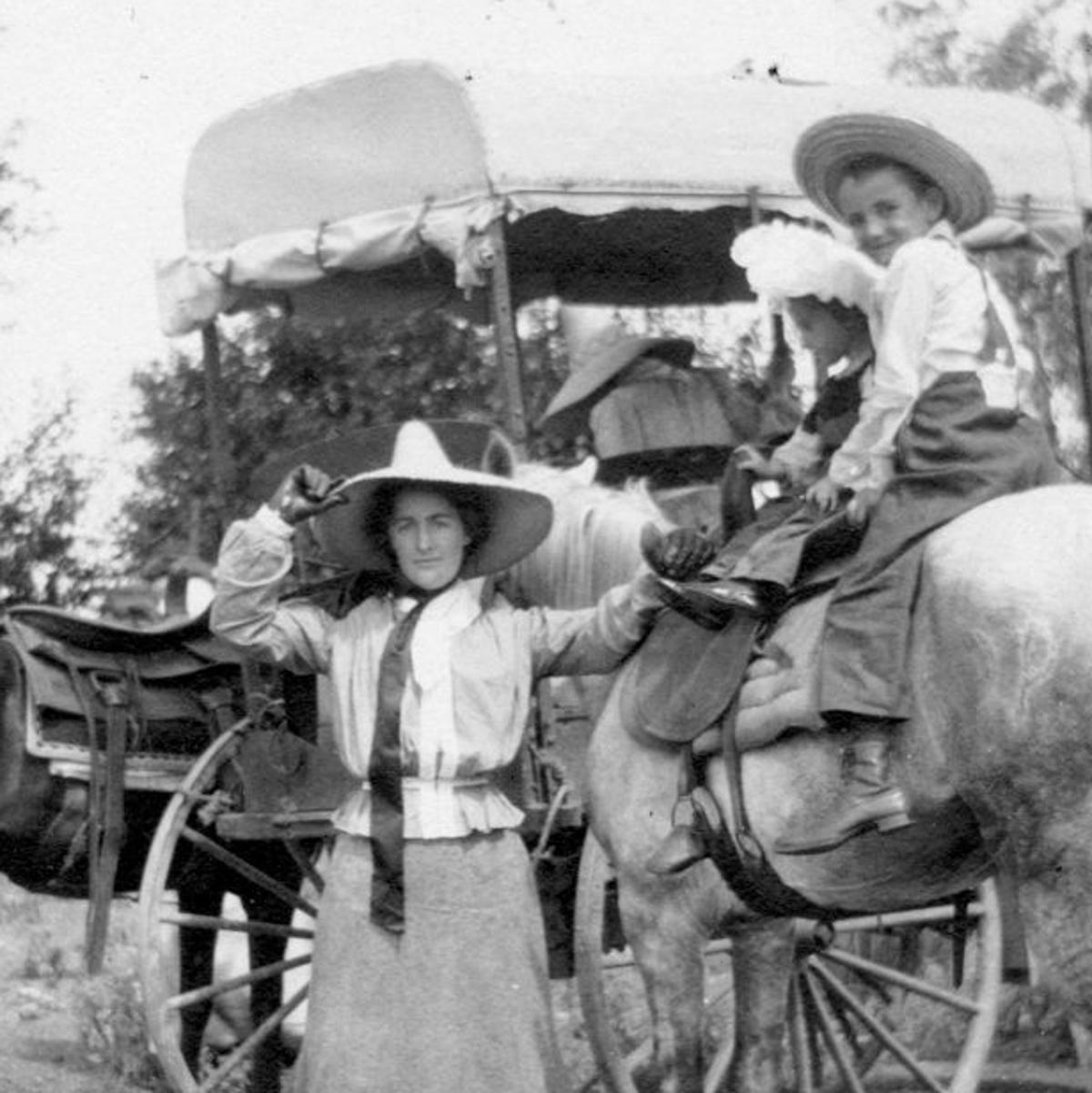 Effie Anderson Smith. E.A. Smith Archives. Effie once said an artist “owns” all the scenery she ever paints: “an uncontested title with no taxes.”

Her great grandnephew Steven Carlson has worked tirelessly to champion her return, culminating in a show called Effie! at the Tucson Desert Art Museum in 2019. Plans for exhibits in Effie’s home state of Arkansas were shut down by the pandemic and are rescheduled for 2021. Carlson is seeking sponsors to help transport Effie’s paintings to Arkansas, where her work has never been shown.

To keep up with Effie, see: http://www.effieandersonsmith.com/web/home.aspx

Michelle Jarvy of Riverside was going through old photos of her great grandmother, Stella Clarke, when she found one showing her and her artist friend, John Hilton. The photo appears to be taken at Hilton’s Valerie Jean gem shop in 1950. 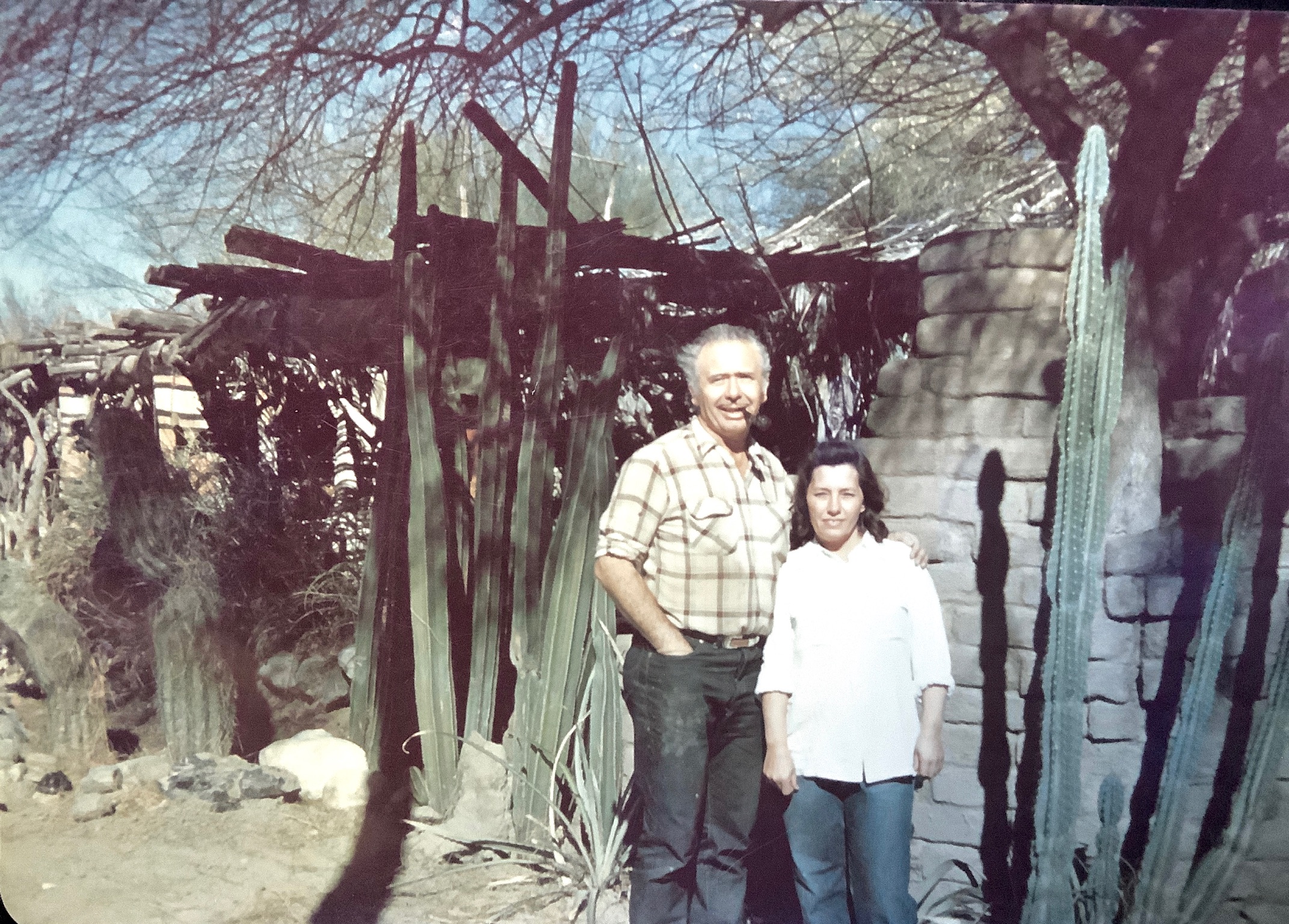 A second photo shows John Hilton and a young girl. Jarvy writes: “Well it wasn’t until I zoomed in on the pic that I realized the little girl was holding something. After looking up calcite mines, because I’d never heard of them, I knew then it was calcite she was holding. I said to myself: Wow this picture is amazing. I need to find out who this little girl is.”

After some research Jarvy concluded that the photo shows a young Kathi Hilton holding the rock specimen, which Hilton mined in the Borrego desert. The crystal was used during WWII to make bombsites. El Monte resident Stella Clarke died in 1952, soon after the photo was taken. Michelle Jarvy never met her great-grandmother but has this recent discovery to remind her of her relative “who was absolutely in love with the desert.” 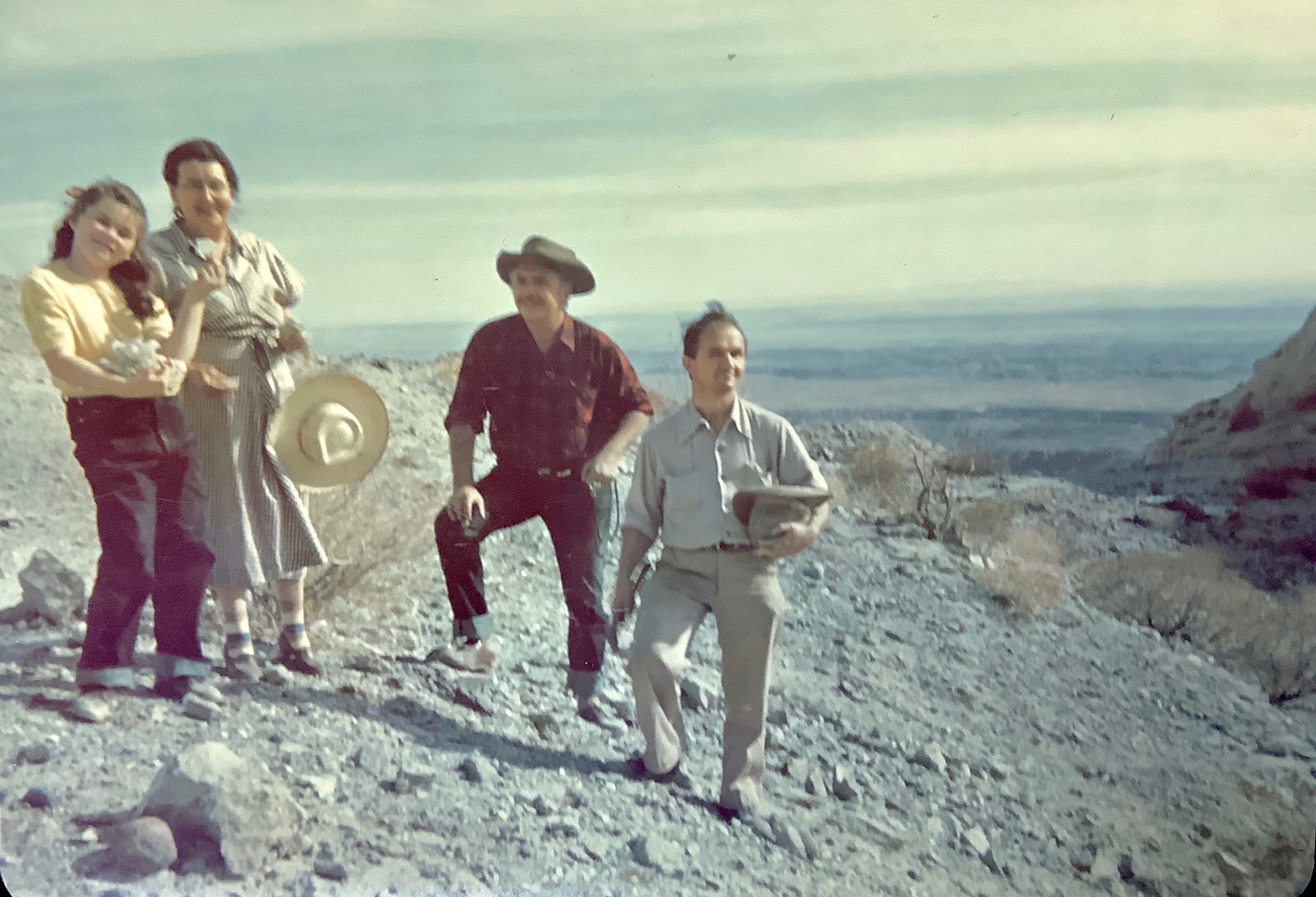 Herman Clarke, at right with John Hilton in hat. Kathi Hilton is the girl holding a chunk of calcite, 1950.