Moving from Ohio to the alien landscape of Wonder Valley, David Greene encountered many wonders—not the least being the desert night.

Greene had been working in a toilet factory in Ohio (hand-painting ceramic bath ware), and had never traveled east of St. Louis until friends moved to 29 Palms. He and his artist wife, Lorelei, decided to follow, settling in the hipster outpost east of Joshua Tree in 2005. 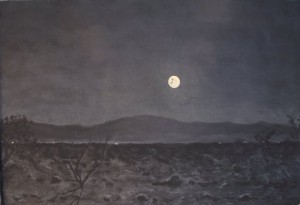 Full Moon on My Neighborhood

Back in the Ohio metro area, the night did not entice. There, street lighting obliterated the starlight and moonlight. But in his new home, Greene would walk out after dark and find even a quarter moon was enough to throw shadows on the landscape. Transfixed, he began asking himself: “OK how do you paint this?” 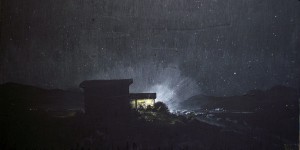 With that question, he was on his way to joining a very small club of painters who have specialized in the night.

Nocturnes are a sideline for most artists. Many of the early desert painters—such as John Hilton–would dash off a night scene or two just to show they could do it. Then they’d retreat to the more familiar daylight. Historically a few artists—Rembrandt, Frederic Remington, Frank Tenney Johnson—have specialized in nocturnes. (The Western artist Johnson shared a studio in Alhambra with the well-known desert painter Clyde Forsythe.)

But no desert painter had really staked out the nighttime as his or her turf until this guy from Zanesville, Ohio came along. 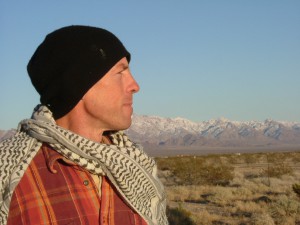 The self-taught artist got his start copying Peanuts characters in kindergarten. He gorged on TV Westerns and studied his parents’ Dictionary of Artists, steering his future course while still a boy. In college, he was inspired by Zap Comix.  Later, he was embroiled in the Columbus arts community and his eclectic work was shown in many Ohio galleries and museums.

Once he moved to Wonder Valley, his path was decided when he was adopted by a hyper Border collie mix. Now there was another reason to go out at night. Greene was constantly walking his one-acre property, he and his dog Sparky scanning the horizon.

There were only a few houses to the east, and wilderness toward the Sheephole Pass in the north: “The big empty,” he says. “It really strips you down of the unnecessary.”

Greene was intrigued by nocturnes he’d once seen in a George Bellows exhibit. He admired the stark, high-contrast palettes and scenes with few highlighted elements. “I wanted to do paintings that evoked the feeling I got from those two paintings,” he once wrote. “But I wasn’t sure how to approach it.”

It was while he was working on a portrait of Tab Hunter for his series Movie Star Zombie Love Affair (paintings based on zombie movies) that he stumbled on a technique that allowed him to paint the night. When the painting was complete, he looked at it in surprise: “Hey that’s a nocturne. I know how to do nocturnes now.”

The secret he said is underpainting. “At nighttime you don’t see all the details. It’s much more impressionistic. The desert is really stripped down to begin with. At night it becomes even more abstracted. It’s this truncated dream world.”

As for why so few artists zero in on the night, Greene says darkness can be intimidating to painters, interfering as it does with their most important tool: their sight. “As an artist you’re really dependent upon what you can see. That’s one of the stumbling blocks. To have enough light to see your easel, you lose your night vision.”

For his night paintings on recycled plywood, Greene sometimes works from memory, from photos or from sketches. Sometimes he just stands outside in the dark, straining to see.  His most riveting paintings capture tiny flecks of presence—a lit window of a distant homestead cabin or far-off headlights—in a sea of blackness.

His dog Sparky appears in several of the night paintings. In those examples, it’s the warmth of a canine providing the light in the vast desert.

Greene does sometimes go out in the daytime, and he paints a wide range of subjects. His Hy Desert series was inspired by California orange crate labels; he has a series of small nature paintings—cricket, moth, rat skull–and has even ventured into cubism, modernism, surrealism and mural painting, completing six murals for the Holiday Inn Express in 29 Palms.

But, irresistibly,  he is drawn back to the night. There’s lots more still to see out there, he says. “Every night’s different.”

Greene’s work is also on display at the Pioneering Spirit group show at the 29 Palms Visitor Center and Gallery through the end of October.