The first-annual Agnes Pelton Birthday Tea–on August 22, 2011–was hosted by Peter Palladino and Simeon Den, the new owners of Pelton’s former home in Cathedral City. Though Pelton died in 1961, her presence at the gathering was as strong as if she had just gone out for ice cubes. 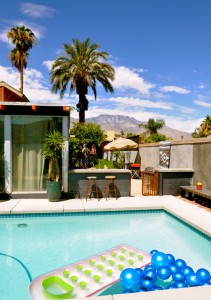 The backyard of Agnes Pelton's house with a view of Mt. San Jacinto. Photo by Christy Porter.

The event marks a hometown revival for the artist. For years the city paid little notice that one of the West’s most visionary artists spent her working days here. Recently there’s a growing awareness that Pelton is as important to Cathedral City as Georgia O’Keeffe to Abiquiu.

A transcendental artist who also painted classic desert landscapes, Pelton has often been compared to O’Keeffe—though some critics say she is better than the New Mexico master. For more on Pelton, see: https://www.californiadesertart.com/?p=226

The revival started with an accidental purchase. Photographers Peter Palladino and Simeon Den were looking for a second home in Cathedral City last year (they live part-time in the downtown LA arts district) when they found the duplex at 68-680 “F” street. The home was originally on “E” street before the entrance was switched to the rear of the home. 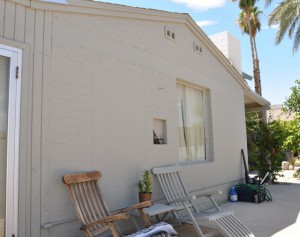 The back of Pelton's house was once the front. Photo by Christy Porter.

It wasn’t until after they’d cemented the deal that real estate agent Kris Rain told them they’d just purchased the former home of a great artist. Rain, too, had been unaware it was Pelton’s home when she sold the house. That’s how far Pelton had fallen out of local consciousness.

When Pelton completed her house in 1939, Cathedral City was a tiny outpost. The artist bummed rides from her neighbors (she didn’t drive) and was involved in small town life. She lived in the house for 20 years, incorporating the views of Mt. San Jacinto and stars over the mountains into her most famous works. 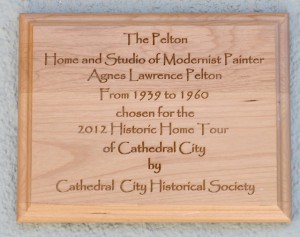 When Rain told Palladino about the artist, the new homeowner went online and looked at her paintings. He is not big on abstract art so he was stunned by his own reaction. “Those works just resonated with me. They were true. They were real.”

The studio where Pelton painted looked the same as she left it, with the same distinctive fireplace and diamond-scored concrete floors.

To honor the artist, Palladino had reproductions of some of her paintings made (the originals are hard to come by) and hung them in her former studio. He plans to eventually display all the paintings she made in that room. “They were created here. They were born here.” 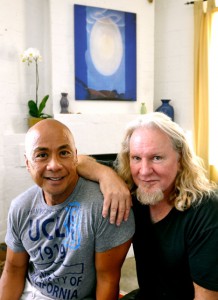 Normally a linear, left-brain kind of guy, Palladino has become more right-brained and mystical under Pelton’s influence. He began having dreams of the house. One dream–of the kitchen and an antique flour sifter–was as intense as “a dream of your first love.” He’d be in LA working and suddenly feel called back to the house so strongly “I could hardly stand it.”

Fiercely protective of original features of the house, he instructed workers digging a pool in the backyard to avoid a remnant of an old desert willow. When they tore out the tree anyway, Palladino was so chagrined he planted a piece of the trunk and a new willow in front of the house.

“I don’t see ghosts here at all, but sometimes Pelton’s sensibility overcomes me,” he says. “Her spirit is alive in this house.” When it comes to the house, especially, Pelton speaks to Palladino. In discussions with Simeon about decorating, Peter sometimes blurts: “She wouldn’t like that…”

As close as he now feels to Pelton, Palladino is especially saddened by the fact that she had to leave her home for the last year of her life because she was broke. She moved to a smaller house in the same neighborhood. 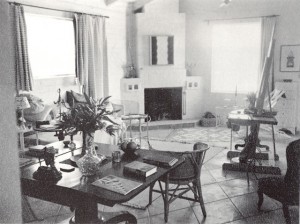 Among the guests at the birthday tea was Kris Rain, the real estate agent who sold the house, and her companion, the artist Snake Jagger. Pelton scholar Nancy Strow Sheley drove all the way from Long Beach. Cathedral City resident Michael Petit tentatively showed around his new desert landscape painting. Artist Nancy O’Donnell took guests–such as fellow artist Joné Dupré– to see her work in her apartment next door. (The Pelton house was turned into a duplex at some point; and Nancy rents part of it).

O’Donnell is the newest player in the Pelton revival story. She had just ended a relationship and was not sure what to do next, when she went looking for an apartment on Craigslist and ended up on “F” street. “The minute I saw this place I said: ‘I want it.’ 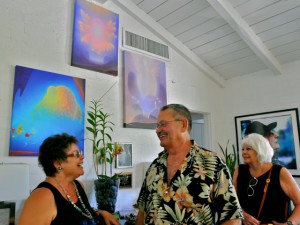 “I just feel this place has protected me,” she adds. “The work is flowing and it’s coming in a different direction.”

O’Donnell is a desert painter herself; she had a gallery for 10 years in Wickenburg, Arizona. Since returning to the Coachella Valley, she has had a show at the Palm Desert Visitors Center and has been focusing recently on large commissioned pieces.

Thanks to Pelton’s influence, she started reading about Agni Yoga (a fascination of Pelton’s) and has started meditating again. She’s even experimenting with abstractions. 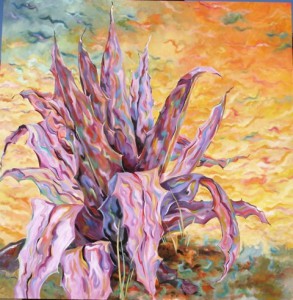 Century One, by Nancy O'Donnell

Between O’Donnell and her landlords, Pelton is not likely to be forgotten again. As Palladino says: “I’m driven to make more people aware of who she is. It’s my job—correcting an injustice.”

To that end, he’s created a Facebook page for Pelton and is working on securing historic status for the house. The home will be part of the Cathedral City Historic Home Tour in 2012, and Palladino is open to hosting more events honoring the genius of “F” Street.

For more on Peter Palladino and Simeon Den, see:

Nancy O’Donnell can be reached at odonnellnancy50@gmail.com 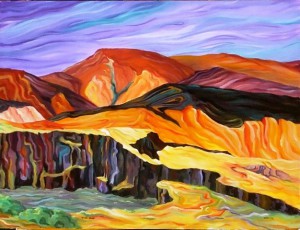 The Gap, by Nancy O'Donnell