For R. Brownell McGrew’s first ever one-man show in 1967, Ginger Renner packed nearly 1000 guests into her Desert Southwest Art Gallery in Palm Desert. The crowd spilled onto the then-deserted Highway 111, high on art and the owner’s infamous Fish House Punch. “You mix a goodly amount of fresh squeezed lime juice, Chablis, syrup and a pint of cheap brandy,” Renner explained. “You let that mellow and pour it quart for quart with champagne. It sure sold a lot of artwork.” 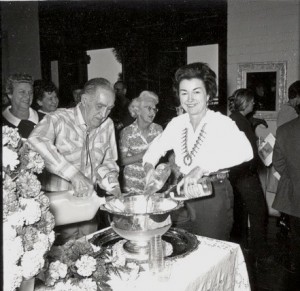 Renner, who died on March 27, 2011 at age 89, was a PTA mom from Riverside who transformed the world of California desert art. Without her there would be no Smoketree School–or at least not one we’d want to chronicle.

I visited with the legend at her Phoenix home in 2009 and she filled me in on the little-known story of her Smoketree days. Renner was a huge name in Western art; her fame as the world’s premier expert on Charlie Russell eclipsed her achievements in the desert. Few in the cowboy art crowd even know that she got her start as director of the Palm Desert gallery, housed in what was until recently the LG’s steakhouse building.

On the afternoon of my visit, I sat on Ginger’s couch with a view of Camelback Mountain. A small lizard ran across the couch cushions, making me immediately feel at home. The walls held a dazzling array of Swinnerton field sketches and cartoons, Wieghorsts and other Western painters. I looked around for a bare wall where I could pose Ginger for a photo. There were no bare walls. 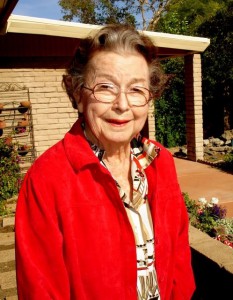 Renner appeared fragile (she had heart bypass surgery in 1986 after 50 years of smoking) and wore bright red lipstick. You could mistake her for a demure lady, until she started talking. Then her Rock ‘n’ Roll spirit came through.

The smoky-voiced arts patron called people “honey” and—in her heyday–wore fringed jackets and beaded belts. This single mother of four was the Coachella’s Valley’s own version of Mabel Dodge Luhan, the patron and muse to the Taos artists.

Renner led me into her study, opened a cabinet and bid me to dig around behind old kid’s puzzles, board games and photos of trips to China—where I’d find mementoes of her desert days.

I contorted myself into a cramped space beside a sofa and groped in the dark corners of the cabinet till I dragged out a series of black binders with names in white ink on the back: Wieghorst, Swinnerton, Rishell and more. The artists of the desert gallery days were precious to her, and—just like a proud parent–she’d taped news stories and opening announcements into these scrapbooks.

As I looked through the binders—a Who’s Who of now famous Western artists–Renner told me she’d been imprinted with a love of the West and art while growing up in Silver City, New Mexico. She lived a conventional life in Riverside until 1956, when she accepted an invitation to move to Indio and take a job as Jacqueline Cochran’s campaign manager in the pioneer aviator’s run for Congress.

When Cochran was defeated, Renner went to work for the Sunkist company, living in a rundown house on Cochran’s ranch off Monroe Street in Indio. Around this time she bought her first Goya etching, for $25 down and $25 a week. “To me it made that house livable,” she once said in an interview. An instinct–art makes ordinary lives better–stirred in her. (She was then known as Ginger Neveau, and also—briefly–as Ginger Schimmel).

Next she bought a Burt Proctor painting and started to realize she had a knack for spotting first-rate paintings. In 1963, her boss at Sunkist, Don Stevning, offered to go in with her on buying a gallery. She didn’t get into the art business until age 40, but then she never slowed down.

As the home of Desert Magazine, the adobe building on Highway 111 had legendary allure even before Renner arrived. The magazine spread the creed of treasure hunting, mirage-seeking and jackrabbit homesteads to the urban masses nationwide. The building’s art gallery had some formidable leaders prior to Renner—Marie Ropp, starting in 1948, and then Harriet Day, who also once ran the Desert Inn gallery in Palm Springs. Renner complemented the vision of editor Randall Henderson by selling the mystique of the desert via art. “A promoter—that’s what I am,” she said.

She started out wearing respectable dresses and pearls, but soon graduated to Western-style turquoise bolo ties, boots and vests. “That was a grand gallery, it really was,” she said. “It was a life-changing experience for me.”

Soon after opening day, Renner had a revelation that would shape her career. “I had this dream that Western art was going to go big,” she says. Always one to trust her hunches, she started recruiting painters like Charlie Dye, Joe Beeler, Johnny Hampton and George Phippen. These were the same men who would found the Cowboy Artists of America in 1965.

She was often the only woman in a crowd of boisterous, towering cowboy artists—and she seemed to like it that way. Renner introduced the work of artists like Ed Borein, Maynard Dixon, Carl Oscar Borg, Frank Tenney Johnson and E.I. Couse to desert audiences.

Sitting on the floor in Renner’s study, I threw out the names of artists she’d worked with and Ginger free-associated:

Of R. Brownell McGrew and his beloved Navajo and Hopi portraits, she said:  “He was kind of a genius, a real intellect.”

Jimmy Swinnerton: “He was so big in my life. I have all kinds of stuff that Swinnerton gave me.”

Ted DeGrazia, the Arizona pop-artist: She gave him an annual show in Palm Desert. (If you are ever in Tucson be sure and visit DeGrazia’s Gallery in the Sun.)

Robert Rishell: He was a favorite of Renner’s and one of her best-sellers. She sold out his first show, but the late painter so far has not achieved the status of Swinnerton and Wieghorst. 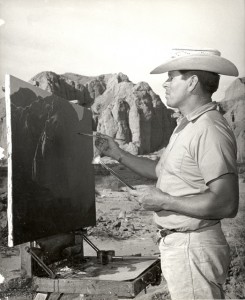 Robert Rishell in the Mecca Hills

Olaf Wieghorst: He would sit at Ginger’s desk when she was on the phone and she’d shove a piece of paper at him to keep him busy, as if he were a wiggly kid. Many of those original pen and ink sketches were on her wall.

Clarence McGrath: One day a new artist came in wearing sharply creased Levis. Renner was busy paying bills, but stopped what she was doing to get down on her hands and knees to look at his work. (Her policy was to never turn down an artist cold. If they were “pretty bad”, she’d at least hand them some advice.)

This artist, an unknown named Clarence McGrath, was not bad at all. In fact she guessed he was going to be huge. 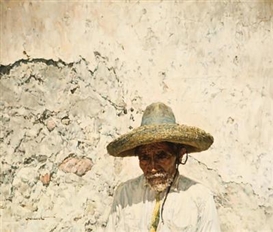 Renner wanted McGrath to drop everything but painting, so she made him an offer: “How much do you need to live on from now till March?” Supporting him until he could get a show together, she then sold out his exhibit in 4 days. McGrath’s career was stalled by a series of tragedies. Losing two wives and a child in separate accidents, he succumbed to his grief and addictions. Ginger lost touch with the promising painter and McGrath died unknown, in Mexico, in 2007.

Her relationship to the artists—like all good muses–was that of a mother and a shrink. “Artists are almost all emotionally unstable,” she told me that day in her study. “They’re always sure they’re never going to paint another masterpiece. If they don’t have a good spouse it’s tough, it’s really tough. I’d sit ‘em down and talk to them like a Dutch uncle and give ‘em a pep talk.”

A regular customer at the Palm Desert gallery was President Dwight Eisenhower. After playing golf he’d come by the gallery, but he had an unsettling habit of pawing the paintings.

One day, Brownie McGrew had just delivered a still-damp painting and Ginger hung it in front with a “Do Not Touch” sign. When she walked in to greet Eisenhower, she found him looking over the McGrew and wiping his fingers with a handkerchief. Renner fretted over the damaged painting, but then decided to raise the price from $12,000 to $15,000. McGrew’s painting The Dinae presumably still bears twin finger scrapes.

In 1965 Renner bought a second gallery in Jackson Hole, Wyoming. (Her Trailside Galleries, under new ownership, still operates today in Jackson Hole and Scottsdale). She bought a 32-foot airstream trailer and she and her kids made endless trips back and forth from Palm Desert to Jackson Hole, spreading the gospel of desert and Western art, and throwing parties whenever possible. Renner’s daughter, Amanda Stine—now a chef in Sedona—helped serve at the parties when she was a child.

One memorable bash was Jimmy Swinnerton’s 94th birthday. Renner took a 30×40 painting of Agatha’s needle (a sandstone spire in Monument Valley) to an old German baker in Mecca and asked him to replicate the painting on a cake. The painting was worth $6,500 at the time, so the baker was instructed not to slop the frosting. 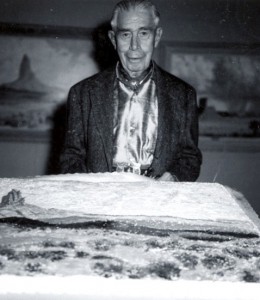 Jimmy Swinnerton and his birthday cake

Another landmark event was Ed Ainsworth’s memorial. The LA Times columnist Ed Ainsworth was a friend of the artists and of the gallery. Renner put up the money for his book The Cowboy in Art. Unfortunately Ainsworth died five days after the book went to the publisher. They decided to have a party, of course, and installed a boulder with a bronze plaque dedicated to Ainsworth in front of the gallery. (Ainsworth’s Rock can now be seen at Moorten Botanical Garden in Palm Springs.) 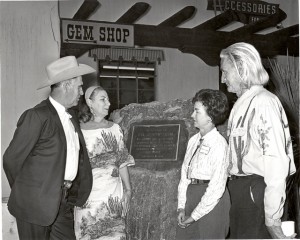 In 1973 Ginger married Frederic Renner, who grew up near Charlie Russell in Great Falls and was an authority on Russell’s art. Ginger left the desert and she too, became a fixture in Western art circles. After Fred Renner died in 1987, Ginger took over as the leading Charlie Russell expert. She was often called on to authenticate alleged Russell paintings. Sellers dreaded hearing Ginger’s words: “It’s a helluva painting but it’s not a Charlie Russell.”

The Western art Renner promoted has become more and more popular and profitable, with early masters selling for millions of dollars. Contemporary Western painting, too, has become big business, partly due to Renner’s promotional genius. Desert art lags slightly behind but—thanks to Renner and others—the two genres will always be linked.

Renner’s impact had been pretty much forgotten in the Coachella Valley until one day the artist Bill Bender said to me: If you really want to know about the Desert Magazine gallery you should track down Ginger Neveau (her name at the time.) My eternal thanks to Bill Bender for sending me in search of Renner, who is survived by two children, five grandchildren and four great-grandchildren.

Desert Magazine ceased publication in 1985 and the gallery, at 74-225 Highway 111, shut down. The building operated for years as LG’s Prime Steakhouse, until the restaurant closed in July, 2011. To date, no gallery owner has had as much influence on the Smoketree School as Ginger Renner—with her magical brew of swagger, great taste and Fish House Punch. 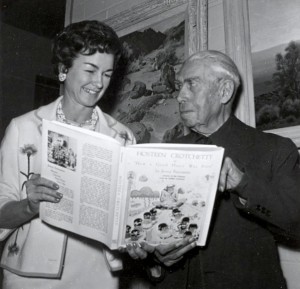