Since founding this website I can now attest: The world is not really going to Twitter. People are still going deeper and deeper into the land, abandoning their glowing screens to seek beauty. The ranks of contemporary desert painters are replete with people who value great light over a killer app any day.

I was reminded of this fact again recently when a Palm Desert acquaintance, Eric Vogt, told me about an old friend of his, Glenda Nordmeyer. If you like desert painting you’ve got to see her work, he said. 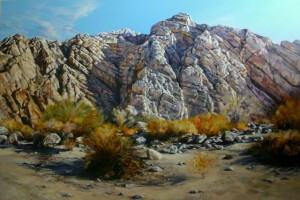 From Palm Springs I drove east on 1-10 to one of those new developments creeping up toward the Indio Hills. I took a wrong turn or two and kept my expectations muted. What were the chances that a modern day Swinnerton lived out near the fake water-ski lakes?

Glenda Nordmeyer, a small and gracious woman, answered the door and invited me into her modern, airy living room. Trying to avoid the eyes of an enormous ox-like beast on the wall (Glenda’s husband, Stan Mroz, is a big game hunter), I looked around for something else to focus on. 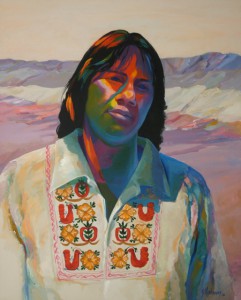 I was riveted by a painting of young man’s face. His expression held the gravity of the ages, and he seemed almost to merge with the familiar multicolored hills behind him.

Glenda told me he was a farmworker protesting in the Coachella grape strikes of 1973. The colors of the Mexican flag saturated the man’s face and the colors of the American flag played in the Mecca hills around him.

As we strolled the rooms of the house, it was like walking through a secret diary. There was a coherent story here, a lifetime’s travels, a career’s worth of sophisticated work lining the halls and stacked in the studio. While Glenda is represented by Adagio Gallery in Palm Desert–and previously worked with galleries in Lake Tahoe, Sedona and Scottsdale–self-promotion and recognition have been the last things on her mind. “I’ve done myself a disservice by not hanging out,” she says. 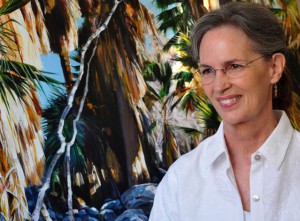 For 40 years, Glenda has relentlessly roamed the Coachella Valley canyons. She grew up in Mill Valley, began her art training in Washington State, and then moved to Southern California in 1970. She was busy raising three daughters (Cathie and Lisa are also artists today; Kim is a teacher) but found time to take lessons at College of the Desert in the early 1980s.  In addition, she had the lucky break of finding Val Samuelson teaching at an old date ranch in Palm Desert.

Samuelson was a commercial artist who worked so hard at his trade that his eyes hemorrhaged, blinding him. After giving up art temporarily, he recovered and came to Palm Springs to work as art director of The Villager, a stylish predecessor to Palm Springs Life magazine. He also contributed covers to the old Desert Magazine, once published in Palm Desert and still cherished by groupies today.

The late artist taught Nordmeyer about dunes, shadows and the possibilities of abstraction. Once she had the artistic grounding, she began spending more and more time in the places that called her: 1000 Palms Oasis, the Mecca Hills, and the Little San Bernardino Mountains. 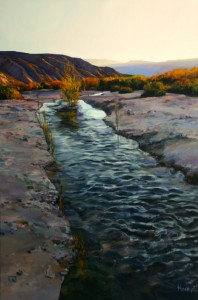 In the early days Glenda would stroll up Fargo Canyon on Sundays with her late husband, Bill Nordmeyer. They each wore a whistle around their necks. Glenda would wander and paint “until it got too hot or the light was no good.” Then one of them would blow the whistle, signaling it was time to go home.

Her greatest sorrow is when the places she frequents—such as the dunes where Indian Ridge Country Club is today–fall to development. “I cursed when they built that place,” she days. “I cried when they built it.”

We continued into the hall, lined with massive paintings six feet and more across: a tunnel of rock. (“I can’t paint small,” Glenda says). Sculpture classes at COD, or “hanging out with clay”, helped her to know how to paint rock—an obvious specialty. My favorite: a hawk hovering over a stack of rock in Joshua Tree. 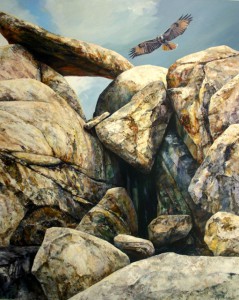 Her style mixes intricate realism with exuberant bursts of Impressionism. “I load the brush up and bash it on and see what happens,” she says. “What I most want to offer the viewer is, in a word, transportation.”

It’s not all a trip to the desert. There are soulful portraits of her guides on a trip to Botswana, African animals, and the transparent waters of Lake Tahoe, a place she’s painted almost as often as the dunes. 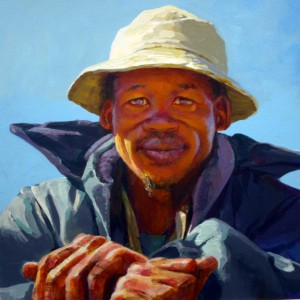 Among the collectors of Glenda’s work are Indio attorneys Melanie Fesmire and George Williams. The Nordmeyer landscapes displayed in their windowless boardroom help transport viewers to the open spaces just outside town. There are blues and gold and deep colors on the desert, but not everyone can see them, says Fesmire, a former Indio mayor: “Glenda captures them better than anyone I know.”

The artist can tell you the colors in  Tahoe granite versus Joshua Tree granite, but she doesn’t talk much about favorite artists and styles. We’re sitting in the living room under the snout of the Giant Eland again, a good place for truth-telling. Glenda, a grandmother of six, says she’s never been too keen on art world talk, theory and trends.

“I’m not clever,” she says. “People are seduced by cleverness in painting, and I think: ‘OK, fine be seduced’. I don’t have to bare my soul in my paintings. If you see I love that place, it’s good enough for me.” 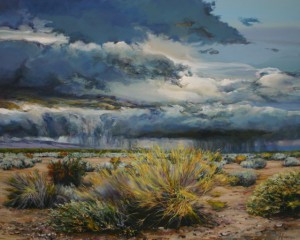 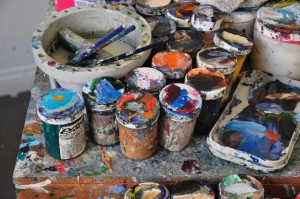