Scholarship on The Smoketree School made big strides in the spring of 2011  with the release of three new books covering unexplored corners of desert art.

California Light: A Century of Landscapes is the long-anticipated history of the California Art Club, the venerable group that has fostered so many artists over the years. The release coincides with the hundred-year anniversary of the club. The text is by Molly Siple and Jean Stern, executive director of the Irvine Museum, with a chronology provided by club historian Eric Merrell, a dedicated painter of deserts—among other subjects—and known for his recent exhibits of Salton Sea and Joshua Tree art. 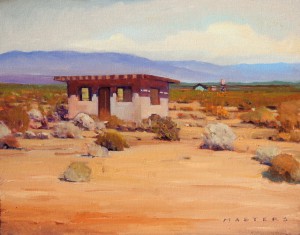 The section devoted to Desertscapes includes a painting of a Wonder Valley homestead by Palm Springs’ own Terry Masters. California Light is especially heartening when it comes to the future of landscape painting in the state. Many contemporary painters of light and landscape are introduced. We invite them all to test their skills on the disappearing dunes and increasingly elusive patches of purple verbena. 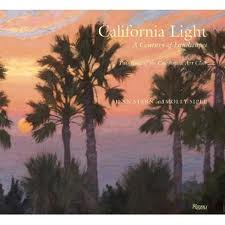 If you’ve seen the Stephen B. Chase Collection of landscape paintings at the Living Desert, you’re probably familiar with the name Jean Mannheim. The German-born painter was among the earliest wave of artists to paint the desert—visiting as early as 1919—and was a friend of painters Benjamin Brown and William Wendt, the so-called dean of Southern California landscape artists. 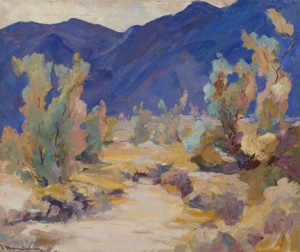 Mannheim’s story has been little-known, but–thanks to the painter’s great- grandson, Richard Reitzell—we now have a vivid collection of Mannheim’s work: From a Versatile Brush: The Life and Art of Jean Mannheim. Mannheim was active in the early years of the California Art Club, so the book intersects thematically with the previously mentioned California Light.

On a recent golf getaway to Palm Springs, Richard Reitzell stopped by the Palm Springs Museum café to talk about his book. An executive for a pharmaceutical company and an enthusiastic explorer of California art, he previously edited a book on the art of the Jonathan Club, the elite 100-year-old social club in downtown LA. When Reitzell’s father died five years ago he inherited a trunk full of Mannheim’s letters and exhibition catalogues. That set him on journey to scour archives and find out everything he could about his great-grandfather.

The painter lived in the Arroyo Seco neighborhood of Pasadena, one of two major colonies that incubated desert artists, the other being Artists’ Alley in Alhambra. With an introduction by Jean Stern, the book includes an entire chapter on Mannheim’s desert work. 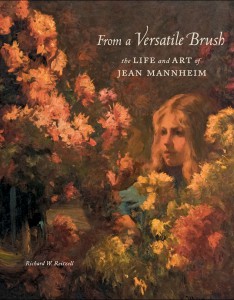 “We know he had at least three good friends who had ranches in the area,” says Reitzell. On his frequent visits, Mannheim painted classic desert subjects—Point Happy, Box Canyon, the Santa Rosas, the Salton Sea and (again and again) Mount San Jacinto.

His desert painting “Magic Moment” was selected by Gardena High School’s senior class for their 1923 gift to the school. The Gardena Collection is an important cache of early California art and was featured in a 1999 exhibition called Painted Light.

Mannheim’s strongest work—including many portraits—was done in the teens, Reitzell says. As he grew into his 70s, he spent more and more time in the Coachella Valley, relying on friends for rides. (Like desert painter Agnes Pelton, he didn’t drive.) Mannheim was one of the most respected artists of his day; but after he died in 1945 he was somewhat overlooked. With this book, Reitzell hopes to again remind the public of Mannheim’s scope. 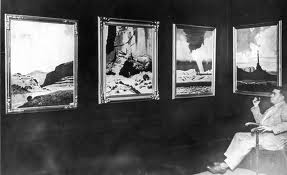 Stendahl began dealing in paintings in 1911. He has been called the most important art dealer in California and one of the most influential in the world. What he liked mattered in the art universe, and one thing he liked was the desert and its artists.

Dammann said via e-mail that Earl Stendahl and his wife Enid spent springtimes in Palm Springs throughout the 1950s, renting the well-known Cary Grant house, a 1920s Mediterranean in the Movie Colony. The men in the extended family came down for the weekends and the kids were enrolled for the spring semester in Palm Springs schools. Undoubtedly, the art dealer invited artists he represented to visit. And what would they do here but paint?

“I believe the charms of the desert–color, air, light, mountains, native plants–drew the plein air painters,” Dammann says. “But once there, I have no doubt Enid and Earl hosted, entertained and amused them.” 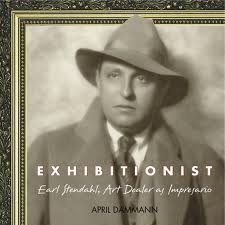 Opening his gallery first in the Ambassador Hotel and then in a larger space on Wilshire Blvd. , Stendahl sold to distinguished collectors and institutions including William Randolph Hearst, Frank Lloyd Wright, George Gershwin, Vincent Price, Edward G. Robinson and even the Louvre. The gallery, still in operation in a different location, celebrates its 100th anniversary this year.