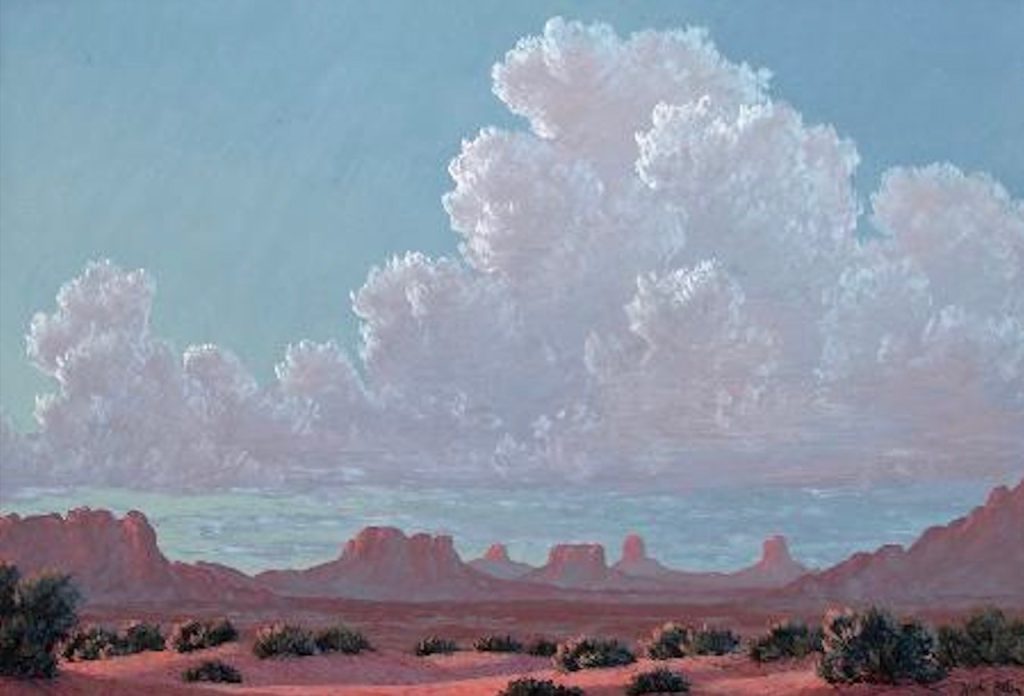 The painter Kathi Hilton Garvin, art dealer Dan Rohlfing and I had just finished dinner at the 29 Palms Inn. The sky was turning pink then blue, like a Technicolor Hilton painting, when Dan suggested that we try to find John Hilton’s old 29 Palms homestead, playhouse to movie stars and desert artists.

As we crammed into my Subaru, I wasn’t so sure about this plan. It was getting dark and no one really knew where we were going except that it was out in nowhere. Dan, co-owner of Bodega Bay Heritage Gallery on the Sonoma coast, had never been to 29 Palms and Kathi—a former resident–hadn’t been back for 30 years.

We turned off Amboy Road onto a dirt track; the lights of the old five-acre homesteads were far between. The street signs were sandblasted and unreadable, even when I aimed the headlights directly at them–and Kathi didn’t remember the street names anyway.

We blundered along for awhile, until a dark structure loomed ahead on a hillside. Kathi said: “Pull in here by this row of trees.” A strange orange moon was rising over “the loneliest little house on a hill,” as John Hilton once described it. The place now looked like a scary tweakers’ den with shredded toys and junk strewn everywhere.

Kathi pointed and said: Here was my dad’s garden. Here was the mineral water pool where James Cagney came to swim; here was the studio where I painted when I lived here. Sometimes my dad’s friends flew in and there were two Lear jets parked on the landing strip out back. 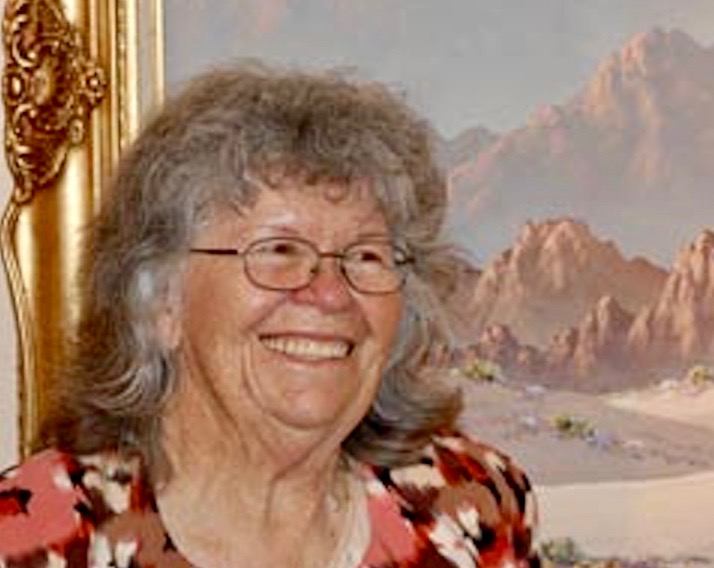 Kathi Hilton at a reception in 29 Palms. Courtesy of Bodega Bay Heritage Gallery.

The three of us sat in silence. I made a U-turn on the old airstrip and drove back to town, awed by this glimpse into the mythic life of the first family of desert painters. Kathi—who now lives in Roosevelt, Utah–deserves to be written about without mention of her dad on occasion. She has an art career all her own. At Dan’s Bodega Bay gallery, co-owned by his wife Linda Sorensen, customers often prefer Kathi’s pastoral paintings over the work of John Hilton. Still, you can hardly talk about one without the other.

The Hiltons shared a devotion to the palette knife, a love of pink skies and a heaping of family lore and myth. Names like Agnes Pelton, Clyde Forsythe, Maynard Dixon, Nicolai Fechin and Bill Bender weave in and out of John’s life and Kathi’s childhood memories.

Like many stories of dads and daughters, this one has its share of sorrows. While John Hilton gave Kathi a calling and a name, he also abandoned the family when she was young and did not always encourage her art. When she entered a poster contest as a young woman he remarked: “It’s good, Kathi, but you really can’t draw.” 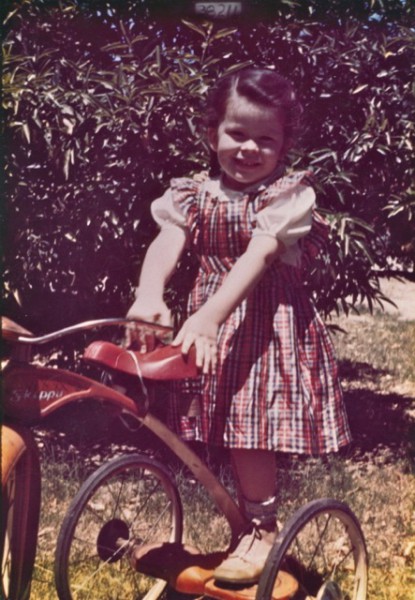 This sometimes-difficult dad also happens to be the best-known of the desert artists, not just for his paintings but also for his shtick. Hilton’s early years spent in China with missionary parents infused him with a love of the exotic, and he later mined the themes of old souls, reincarnation, and the occult to win audiences.

The man mined calcite in Borrego, captured Gila monsters in Baja, sang in Cahuilla and had a poltergeist named Felica. (“Felica was my friend too,” says Kathi.) His story is told by Katherine Ainsworth in The Man Who Captured Sunshine with the tall tales left unchallenged.

One such tale: Hilton was friends with Cathedral City’s Agnes Pelton, but he was no fan of abstraction in art. To make his point, he once painted a gag Pelton, slapped on the title Cosmic Metamorphosis, and sold it instantly for $350 (or so he said.)

In another bit of stock showmanship, Hilton held a ceremony each year in which he burned his rejected paintings in a big bonfire in Box Canyon. The bonfire routine was not unique to Hilton but was practiced by other theatrical painters such as Tucson’s Ted de Grazia.

Born in North Dakota, Hilton first came to Valerie Jean corner in Thermal in 1931. Valerie Jean’s was the famous date shop where old Route 86 meets Ave. 66. Hilton opened his gem and art shop across the street. The ruins of the gemshop were leveled a few years ago; the date shop building still stands. 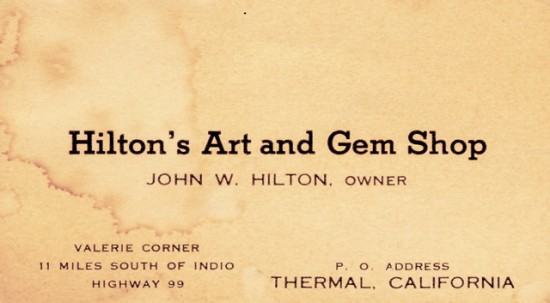 Hilton’s first wife was Eunice, a nurse. The couple’s daughter Kathi–named after Katherine Ainsworth, Hilton’s biographer and wife of newspaperman Ed Ainsworth–was born in a Mecca doctor’s office in 1939 and spent her early years in the art and gem shop amidst Chuckwallas, geodes and magnetic rocks.

Her brother, John Philip Hilton, also an artist, died as a young man. Kathi was born into a perpetual party. An early photo taken at the Thermal home and gem shop shows her mom and dad seated on the bed and presiding over an artists’ party. Is that Maynard Dixon in the corner with the black hat? Kathi says she doesn’t know. Dixon was on the scene at the time, but she was just a kid and often hid under the bed while famous painters sang along to John’s guitar. 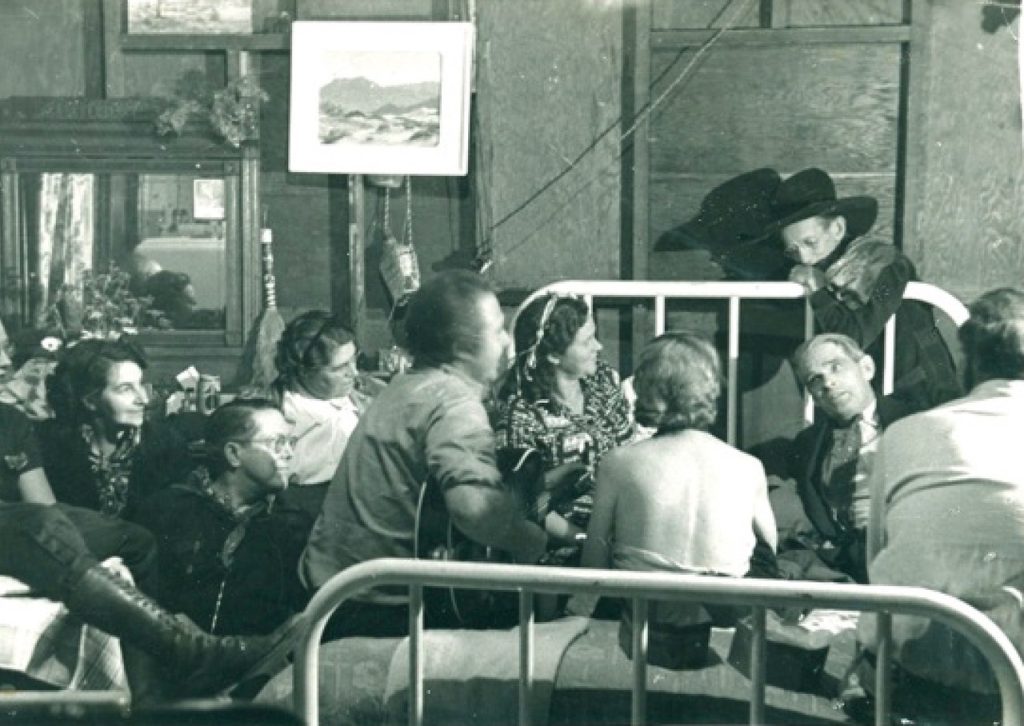 John Hilton with guitar, Eunice Hilton (with dark-hair) seated on bed at the Thermal art and gem shop.

Of her father’s friend Maynard Dixon all she remembers is: “I loved his voice.” She remembers Clyde Forsythe as the man who brought her peppermint candy. Marjorie Reed was her sometimes-baby sitter. And, yes, for all you desert art gossips, her dad did have a fling with the legendary stagecoach painter.

The PT Barnum of California art, John palled around with guys like Zane Grey, President Dwight Eisenhower (a fellow painter) and General George Patton and was always going off hunting mummies or on other adventures with LA Times reporter Ed Ainsworth.

Hilton’s career was helped along by Ainsworth, author of the classic on the Smoketree School,  Painters of the Desert. Hilton supplied the stories Ainsworth needed and in turn Ainsworth gave Hilton and friends ink. 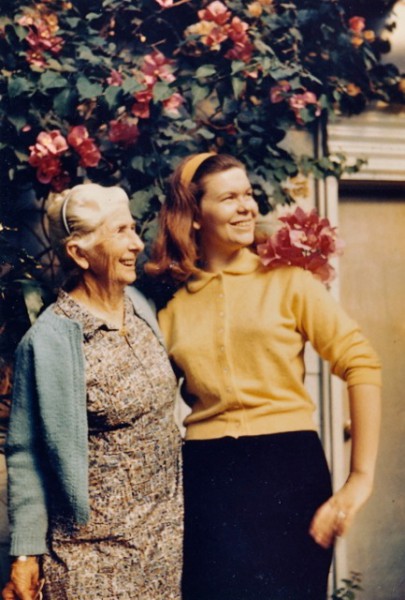 Kathi and her grandmother Hilton in 29 Palms

Hilton moved out of the family home when Kathi was nine; he and Eunice divorced when Kathi was twelve. She didn’t see her father for four years until she showed up unannounced at a show he had at the Palm Springs Museum. His absence had to hurt, but Kathi was stoic as she told the story over dinner in 29 Palms.

Hilton moved to 29 Palms in 1951 after the divorce, choosing the remote town as a place to regroup. He met and married Barbara Hollinger, and became the founding president of the 29 Palms Art Guild and a founder of the 29 Palms Gallery. 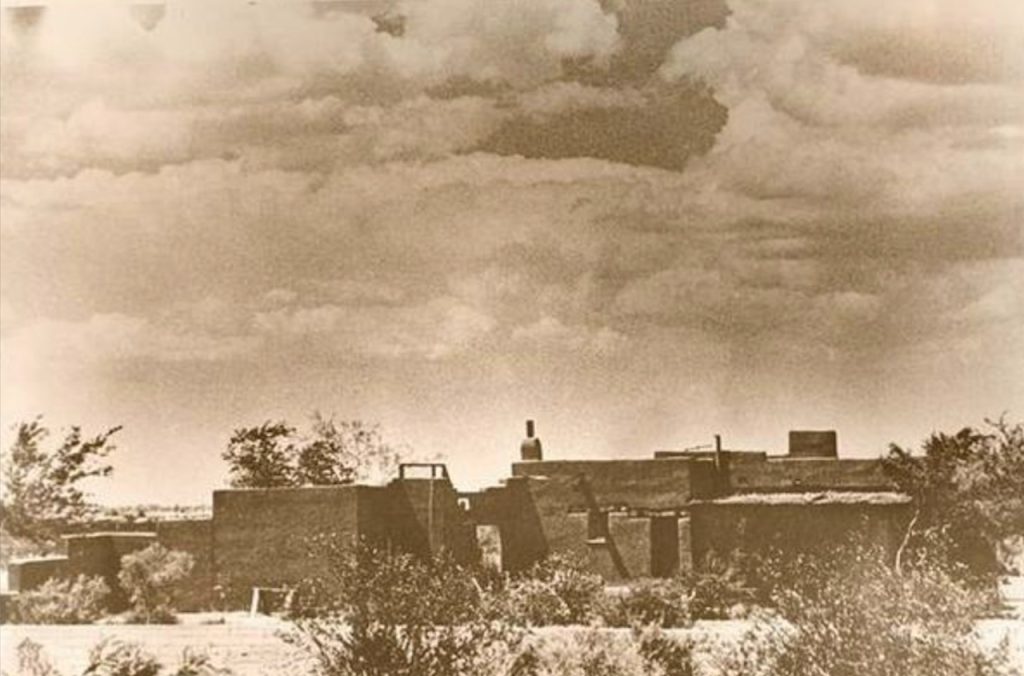 Meanwhile Kathi’s youth was itinerant. She went to school briefly in Alamos, Mexico; her dad wrote about those years in his Sonora Sketchbook. She attended the bohemian Desert Sun School in Idyllwild, then a private school in Sherman Oaks, made a foray into modeling in Beverly Hills and took classes at UCLA.

John’s party life continued. There was always revelry going on at the new house in 29 Palms, and though Kathi became friendly with Barbara, she was on the periphery of the scene.

Only after moving to 29 Palms did Kathi finally become a painter herself, despite her dad’s initial discouragement. She was 30 years old at the time and recent spinal surgery had left her immobile and dispirited. Her friend Ute Mark encouraged her to paint. 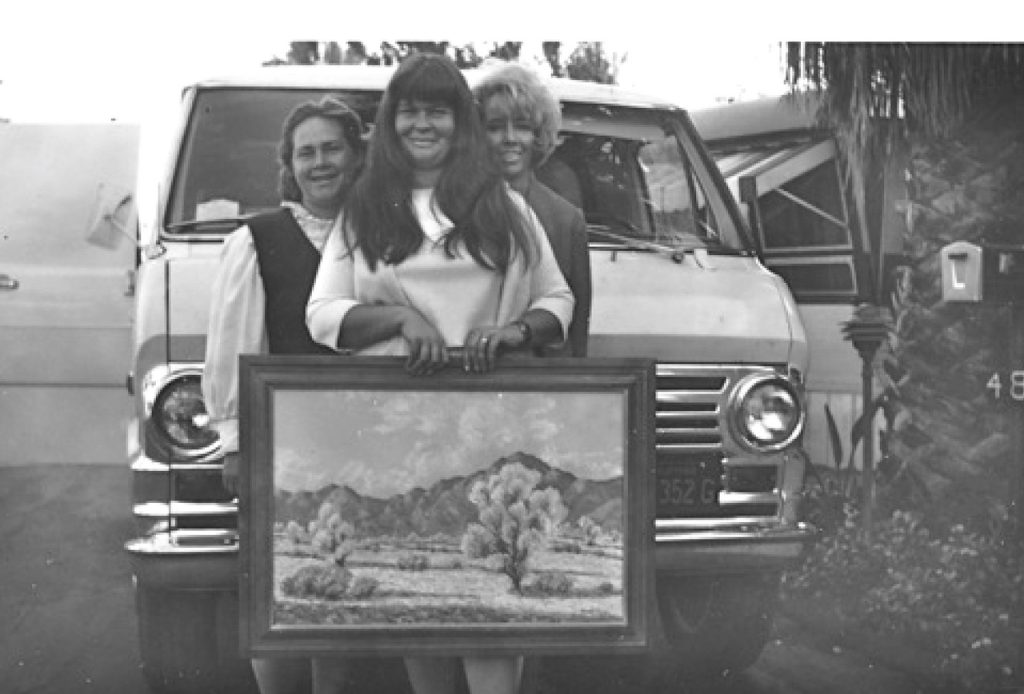 Lee Lukes Pickering–author of Colorful Illusion, a valuable history of the 29 Palms art guild–helped her with colors and convinced her to change her name to Kathi with an “I”. “There’s a lot of Kathy’s out there,” Pickering advised.

When she began painting Kathi found mixing colors came easily to her, a genetic gift.  Her paintings, made with palette knife, oils and fossil wax, looked remarkably like her father’s. “We found out we had the same mind’s eye,” she says proudly.

Kathi’s very first show was at the 29 Palms Gallery in 1970. Her father sent orchids and antheriums from Maui, where he was living at the time. While initially the senior Hilton had not welcomed her foray into art, he now began to appear in father-daughter shows with her. They even sometimes worked on the same canvas together: a Hilton-Hilton.

After Barbara died in 1976, Hilton charmed a waitress named Janna. Kathi recalls her dad carried gemstones from his gem-collecting days in his pocket and used them to woo women. Yet Janna, Hilton’s new wife, was an unfortunate choice. “She didn’t understand who he was,” says Kathi. When Hilton died in 1983, she discarded his files, photos and letters, a complete history of the Smoketree School of desert art.

Bill Bender, a respected desert artist who lives in Victorville, has mixed memories of John Hilton. He sometimes annoyed his friends with his swagger and tendency to hog the spotlight. Yet he brought the impoverished painters needed attention. Painting landscapes is not inherently newsworthy so the desert artists needed a promoter. Hilton was it.

When Bender invited John to Manila and Guam as part of the US Air Force artists program, John took credit for the trip. “As long as he was on stage he was happy,” Bender says. “Still we remained friends right down to the bitter end.”

Kathi Hilton moved to northwestern Utah in the late 1970s and moved into a geodesic dome with her husband, Boyce Garvin. She showed her work widely in the West, exhibiting with the Death Valley 49ers and the Women Artists of the West, among others. Boyce died in 2007; Kathi still lives and paints in the dome. 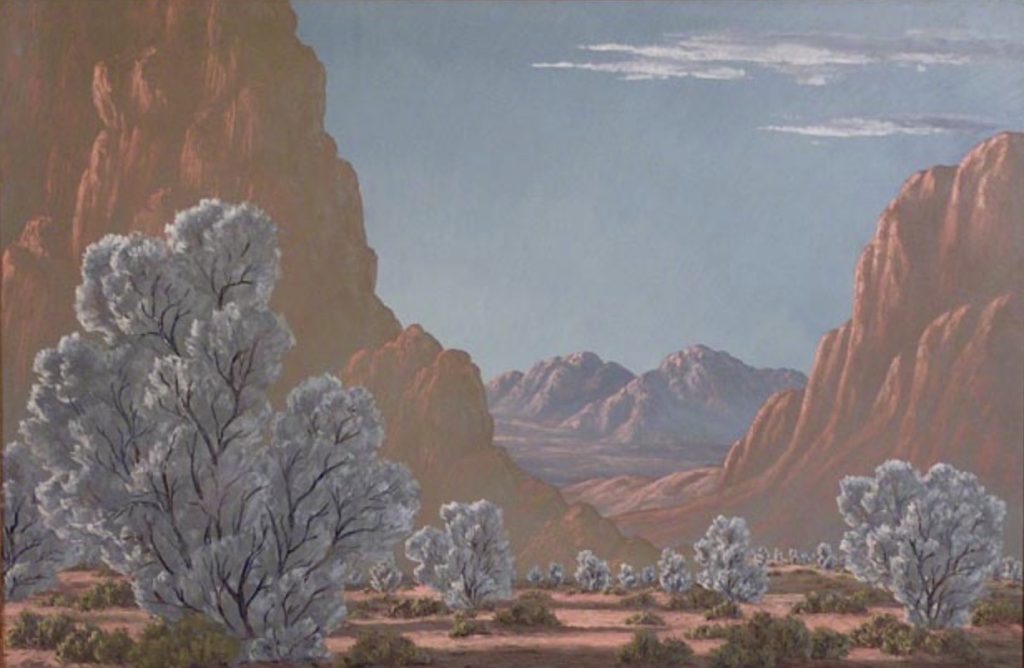 When Kathi returned to 29 Palms recently after decades away, it was like the reunion scene from the Wizard of Oz.  She held court in the adobe gallery–scene of her very first show–surrounded by her small bronzes of yucca and palms, her own paintings, and a few of John’s. The walls were lush with images of verbena, dunes and smoke trees glowing nearly white.

A parade of indistinct faces approached Kathi. Her smiles dawned slowly as she recognized people from the past. In a greeting typical of others, 29 Palms historian Pat Rimmington said to the artist: “I haven’t seen you for 100 years!”

Along with people from the early days, there were many new devotees who hold the name “Hilton” in near-reverence. Gary Cardiff of Palm Desert asked Kathi to sign his books on the early painters, and also purchased three of her paintings. He told her his grandmother, Pearl “Mona” Stuart, worked in the Desert Magazine gallery, one of the places John Hilton got his start.

As Kathi greeted well-wishers in the crowded room, her father was never far from anyone’s mind. There are photos and a bust of her dad, done by Cyria Henderson of Palm Desert, in the gallery hallway. Even John’s remains are here. When Hilton died Kathi flew her dad’s ashes back home and placed them in a compartment under the bust.

It took many years for Kathi to comes to grips with a disjointed childhood and the overpowering influence of the Man who Captured Sunshine, but in the end the sunshine on display in 29 Palms belonged to her alone. As Desert Magazine said in 1978: “Kathi creates a luminosity of her own.” 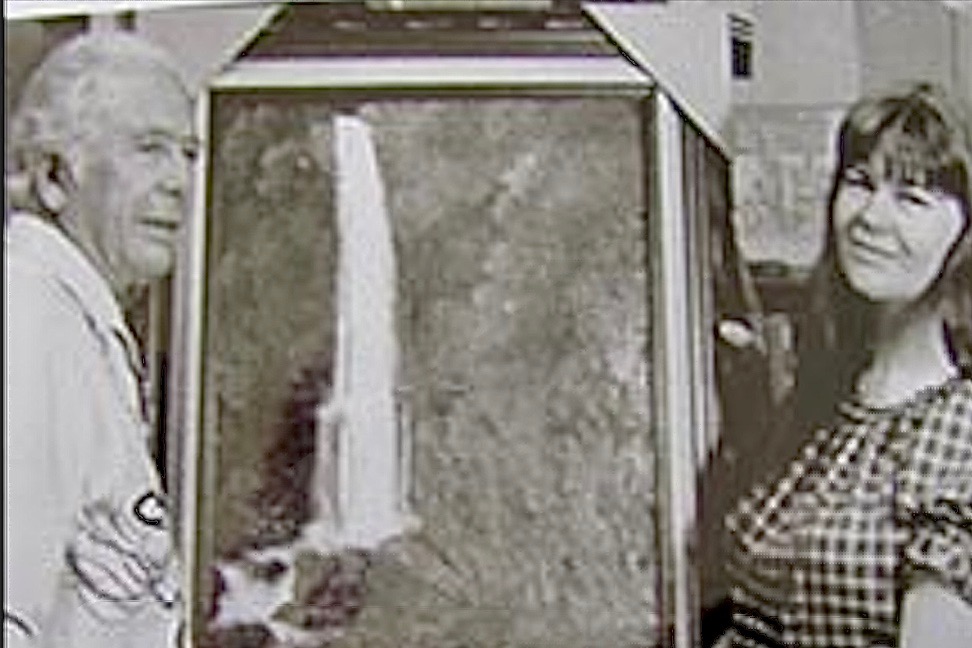 John and Kathi Hilton in a father-daughter show at Saddleback College.