Ed. Note: This article first appeared in the Fall, 2012, issue of The Sand Paper, the newsletter of the Anza-Borrego Desert Natural History Association.

If you meet a woman in Surprise Canyon who can name 40 different wildflowers, or a man in rapture over the strata of the Wind Canyon cliffs, you might mistake them for scientists. But in fact these are contemporary landscape artists Kirsten Anderson and Victor Schiro. 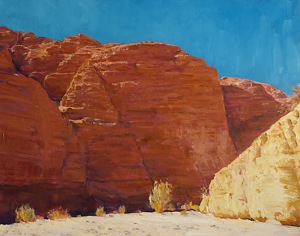 Any wash or slot around Borrego these days is likely to harbor an artist. They’re part of the statewide revival of landscape painting, spurred in part by the renewed vigor of the prestigious 100-year-old California Art Club.

With the explosion of outdoor painting and the opening of a major new gallery by the Borrego Art Institute this winter, Borrego seems destined to be an arts destination. Local collector Jim Anderson says Borrego has everything it needs—isolation, iconic scenery, artists—to draw art fans. “We should definitely promote it as an artist’s retreat, like Bisbee (the eclectic mining town in Arizona),” he says.

For painters, the desert is one of the “California classic” essentials to be mastered, along with the Sierras and the coast. Like traditional naturalists, landscape painters bring intense observation to their study of the desert. As Victor Schiro says: “I do this for no other reason than to record the natural world.”

For Anza-Borrego Desert Natural History Association members, getting to know the local artists and their styles can be as rewarding as getting to know the names of 40 wildflowers. For every “known” painter there are ten discoveries waiting to be made. Due to space limitations, only a few of the best contemporary painters are profiled here.

How do you decide who is good? That’s the fun part as there are few experts. You have as much chance as anyone of finding the next Maurice Braun. Shannon O’Dunn, owner of O’Dunn Fine Art in La Mesa, says what you should look for is “a soul connection, a reverence.”

Lindemulder moved to Borrego Springs in 2007 after the Fallbrook fire destroyed her home and four years of accumulated artwork. Following the fire, she faced hip surgery, nearly died from anesthesia and was in serious need of a refuge. “I think I need a womb,” she said.

So she and her dog moved to Borrego Springs. Her paintings contain human traces such as trailers, roads, housing tracts and agricultural fields. She is especially taken with the trailer communities of Ocotillo Wells. Still, she says, “I consider myself basically a landscape painter—we all live in the landscape.”

It was a good day for the Borrego arts community when Lindemulder moved to town, as the painter supports her fellow artists and brings a sophisticated presence to the local scene. She would be right at home at any urban art opening, yet she’s a true desert rat who even appreciates the annoying desert wind. As she wrote in a poem, she loves the sound of “sticks and rattles and bones.” 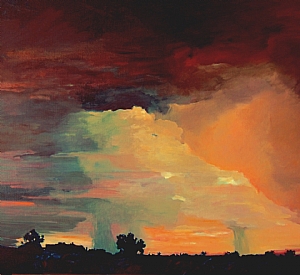 Schiro discovered the Mojave desert as a toddler, romping across 120 acres his uncle owned. He studied art at California Institute of the Arts and exhibited his work widely as a modern painter. Later, while working as a producer and writer in the movie industry in LA, he developed a love for California history and the early exploration artists who toted sketchpads to uncharted places. When he took up traditional landscape painting he says he did it “for the same reason those guys did it.” Experiencing a place is paramount for him; painting it is secondary.

The Camarillo-based artist has been expeditioning in Borrego in recent years in his 4-wheel Land Cruiser, with his beagle and Jack Russell as crew. He plans to spend the next few years concentrating on the region—the rocks, crystals, geology and landscape. When he paints the Wind Cliffs, you can feel the grit. He once wrote about his quest for precision in his paintings: “If I buried a doubloon there, I’d want you to be able to find it.”

Stone belongs to an exclusive subset—artists who actually grew up in Borrego Springs. “The whole park was my playground,” he says. The Brawley-born artist moved to town at age four. His late mother, Barbara, and father Herb were both schoolteachers. Geoffrey’s grandmother, Catherine Stone, was a watercolor painter who took him on painting trips. “I would splash the paint around,” he says. She was always looking at the “long vistas” and instilled the same habit in him. (Catherine and her husband, Joe, were active in ABDNHA; Joe edited The Sand Paper for years.)

Geoffrey later worked as a State Park aide and also studied animation and illustration at San Jose Sate University, where he earned an MFA. Defying recent trends, he is not big fan of painting outside. He jokes that “plein air” is French for: “Painting outside while wearing a big hat and ignoring tourists who want to come up to you while you’re desperately trying to determine the correct shade of blue….”

Look for Geoffrey Stone to take desert art in unexpected directions as he is now working on a study of Borrego life and residents, inspired by his background in illustration and animation.

Anderson has a demanding job as a radiation therapist, competing in outrigger canoe races in her spare time. She’s lived in Alaska and rafted all over Utah. Formerly married to a desert tortoise researcher, she has read widely in  Chemeheuvi Indian and desert history. “I am a renaissance person who likes to paint,” she says.

Based in Long Beach, Anderson has attended the Borrego Plein Air Invitational three times. Her subjects include iconic landscape features such as Palm Canyon and Indian Head—but also airstream trailers and roadside motels. Like most of the artists featured here, she’s dedicated to conserving the lands she paints. “Contemporary plein air painting is about recording the landscape before it’s built on or torn down,” she says.

Watch this artist in the future for her brainy, ceaselessly reaching paintings incorporating her wide interests in history, mythology, environment, science and nature.

Director of the Borrego Art Institute, Nickerson lives part-time in Borrego Springs. In the hot months she’s found with husband Jul aboard their yacht, Sounder, in the Pacific Northwest. Working in Sumi and watercolor, Nickerson has painted classic Borrego subjects such as Font’s Point, the mudhill formation called the Elephant’s Knees and the resident comedic ravens. She brings texture, contemplation and a primeval feeling to any subject she tackles.

Nickerson, who has a BFA from the Art Institute of Chicago, is teaching a class in Gravity Painting this season. If you’re a budding desert artist, sign up and learn to work with paint that moves in a landscape—some would say—that moves as well. 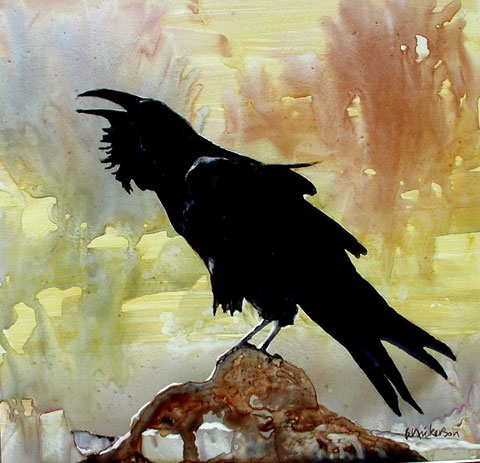 Kerckhoff and the next artist profiled, Eric Merrell, are active members of the influential California Art Club. Both teachers as well as painters, they are introducing new landscape artists to Borrego and influencing others with their distinctive styles.

A sixth generation Californian based in San Juan Capistrano, Kerckhoff is known for his elegant abstract realist landscapes. He likes to make a solo camp along the Borrego-Salton Seaway and paint “the best arroyos in the low desert for color and design”. A true naturalist-artist he can tell where he is by the color of the sand (a pink cast means he’s near the Arizona border). Kerckhoff likes working in the Arroyo Salado, Truckhaven Rocks and Palo Verde washes and a place he christened “Blistered Lip Arroyo” in honor of his own parched lips. 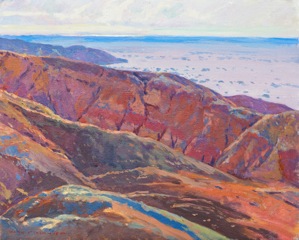 Merrell is the historian for the California Art Club and is increasingly well-known around the state as an envoy for California art. A desert aficionado, he has completed an artist’s residency in Joshua Tree, and participated in an exhibit of Salton Sea painters, “Valley of the Ancient Lake”. He came to Borrego Springs for the first time recently as a judge for the Plein Air Invitational sponsored by the Borrego Art Institute. It was an immersion experience as the young artist was stuck in the sand at Coachwhip Canyon, impaled by a cholla on the Earth Narrows Trail and soaked up Borrego ghost stories about a driverless stagecoach each evening.

He aims to return soon to visit the Pumpkin Patch and the Ocotillo Wells region.  Until then, Merrell and the other highly-regarded artists featured here are Borrego’s best ambassadors–exporting images of this lesser-known desert region to LA art circles and the world. 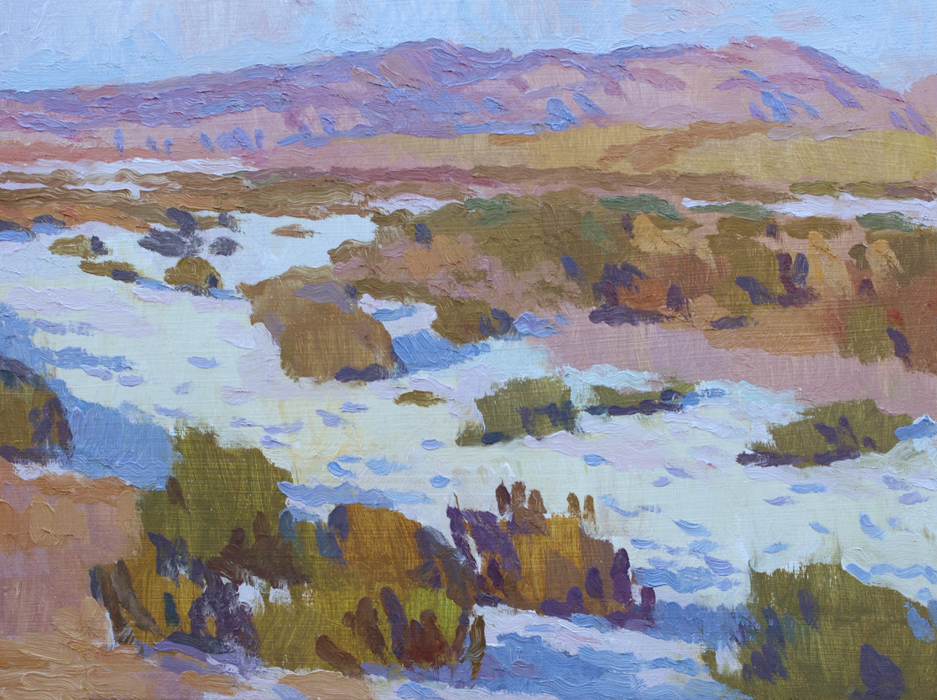