When I heard there was a surrealist living off of South Palm Canyon Drive, near my favorite Indian Canyons haunts, I felt like a botanist who’d discovered a rare desert lily. In Palm Springs we have installation artists, landscape painters, post-modernists and tiki artists–but surrealists? Those are from Paris and New York. 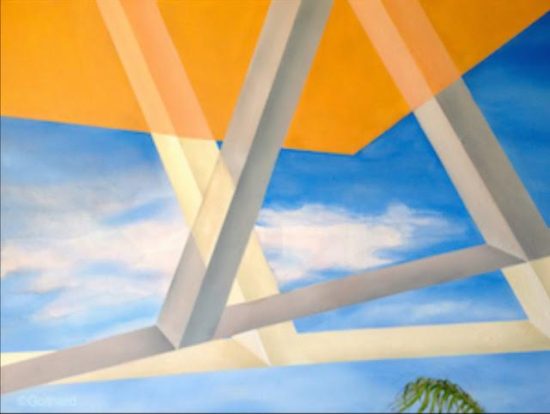 Hurdles in Conflict, by Barbara Gothard

Well, not all of them. There were some noted surrealists inspired by the California desert, including Dorr Bothwell–who lived in Joshua Tree in the 1960s–and Helen Lundeberg, who spent time in Palm Springs and Death Valley. I’d always admired these bold painters and never thought I’d encounter their like in modern Palm Springs. So I set off with anticipation one wintry day to meet Barbara Gothard in her upstairs apartment. She was preparing for an exhibit in San Diego and on every wall there were her big optimistic canvases, many with architectural beam-like elements. The paintings draw you from an interior space confined by bars, toward openings and into a spacious sky. 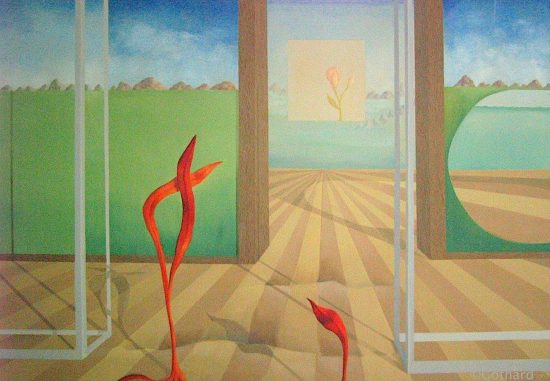 League of Leaves, 1998. Note the brown hills on the horizon.

Gothard sat down at her laptop and showed me her early surrealist efforts. A slight woman dressed in black, she seems supremely focused, as befits someone who calls herself a practicing Buddhist. As we looked at her early paintings, I began to see jagged lines of brown hills, like the mountains you see driving to Blythe.

Yet Gothard grew up in the flatlands of Springfield, Illinois. She had never seen a desert when these desert hills started showing up in her paintings. Surrealists draw on dreams and the subconscious and here it was apparent something like a desert was showing up in Gothard’s inner world. In fact, desert or moonlike landscapes show up in many surrealist paintings. It’s fair to say that–for many artists–a desert lives in their dreams.

As Gothard scrolled back through her life, she told me her father was a carpenter who gave her an affinity for tools. (If you need a Barbara Gothard painting hung, you know who to call.) Her mother encouraged her artistic pursuits. “In response to my winning an art contest in the second grade, she enrolled me in Saturday morning art classes, and encouraged me to pursue my art throughout my childhood,” Gothard says. “She was a marvelous role model who always reminded me that education is something no one can ever take away from you.” 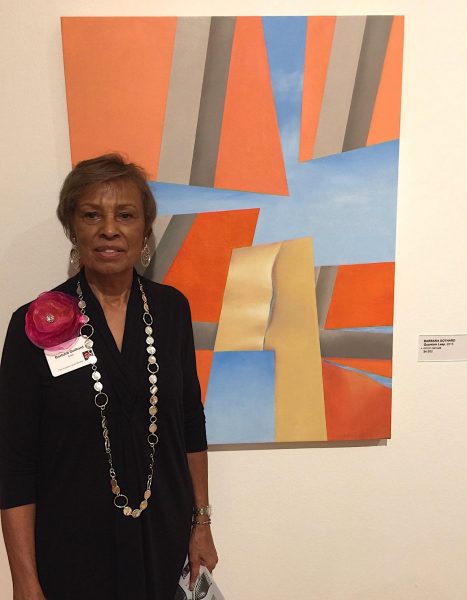 Gothard earned a bachelor’s degree in art from Mount Mary College in Milwaukee, Wisconsin, a master’s degree from Long Island University in Greenvale, New York, and a Ph.D in Educational Administration from Michigan State University. She worked as an artist and art teacher, then as a school principal while raising her son and daughter. Then she made a career detour, working in the corporate world for Burger King Corporation and Dow Chemical Company in South Africa. 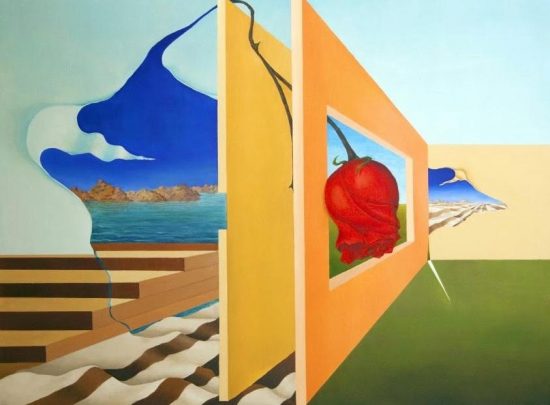 Throughout her life, she painted. She painted on airplanes while traveling for business, and painted in the hospital while her son was having a liver transplant. “It’s one of the only things I ever wanted to do,” she says. She names among her enduring influences Hieronymus Bosch, the Dutch masters, Georgia O’Keeffe and Magritte.

She returned to painting full-time nine years ago. While living in San Diego in 2011, she sometimes traveled to Palm Springs to visit friends. She soon decided she wanted to live here, and moved to the desert in 2012. Not long after, heavy rainstorms flooded her apartment. Her home was quarantined due to mold, many of her possessions were lost, and Gothard had to move from place to place for two years before finally getting resettled. The dislocation spurred her to work even harder (she calls herself a “fighting optimist”), resulting in an explosion of new work that will be on view in San Diego this month (January, 2017). “All of my work is autobiographical,” she says.

From her current studio you look toward the Indian Canyons and one of my favorite vistas–the graceful line where the Santa Rosas meet the San Jacintos. This is a dynamic place where the clouds bunch up on the way from the coast to the desert, and Gothard has a prime viewing seat. On her easel when I visited was a huge new painting, Hurdles Expanding. The color, the expanse and the peace of the Canyons have all worked their way into this painting, Gothard says, looking out the window at the overcast sky. 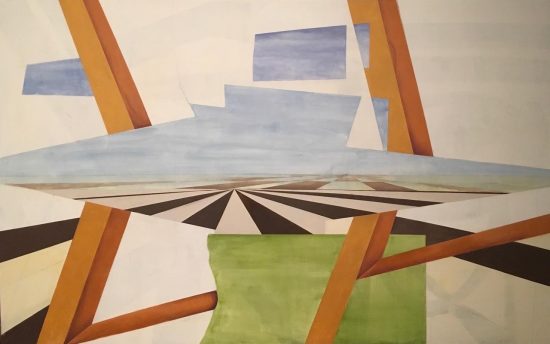 Hurdles Rising, a painting in progress.

From the kitchen window of her apartment there’s an equally inspiring view–of Oswit Canyon, a place where bighorn sheep roam and where Cahuilla Indians once gathered eagle feathers for ceremonies. The canyon is now threatened by development; a well-organized resistance is petitioning to save Gothard’s view.

When the sun hits the rim of Oswit in the mornings, Gothard sees a wash of orange light on the peak. This tangerine hue has found its way into her paintings.

Along with the natural elements, there are man-made girders that recur in her paintings. They are hurdles, Gothard says, representing the obstacles she’s encountered in life. The prevailing feeling is of relief and space. Looking at a Barbara Gothard painting is like gazing into the Indian Canyons when you’ve been at the computer too long. 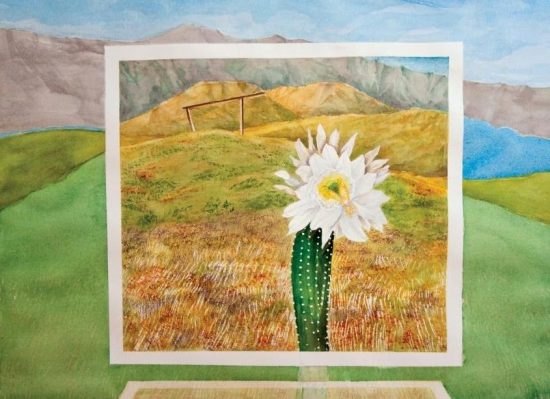 Barbara Gothard, first panel of Journey From the Desert triptych.

It’s not a bad time to be a woman artist exploring these genres. When surrealism was founded by the French writer Andre Breton in the 1920s, it was a boys’ club. In the last four years, though,  women surrealists have been in the spotlight with exhibitions at Sotheby’s in New York and at the LA Country Museum of Art. Frida Kahlo was the most famous woman surrealist; also well known is Dorothea Tanning who advised artists: “Keep your eye on your inner world.”

Gothard keeps an eye on her inner desert, but increasingly she’s taking in the real desert, too, on walks into the Indian Canyons and Oswit. So the next time you go walking there, watch for surrealists and bighorn sheep–and look beyond every hurdle to the opening sky.

Gothard is represented by the Jorge Mendez Gallery in Palm Springs. 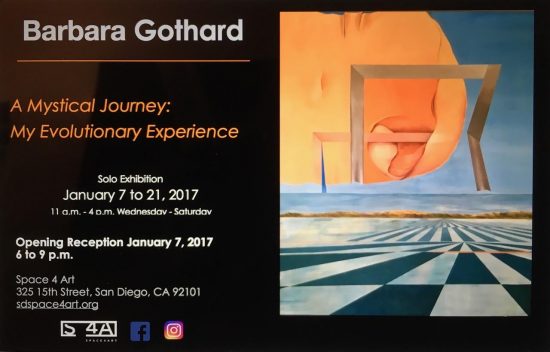 4 comments for “Barbara Gothard: Surrealism and the Desert of Dreams”