California is a vast and picturesque region with a great variety of landscape.  From the snow-capped peaks of the Sierra Nevada Mountains to the dazzling beaches and coves of the coast; from the flower-covered hills and secluded tree-lined valleys to the isolated splendor of the Mojave Desert; all these vistas were ideal subjects for the landscape painters who came to California over a hundred years ago.  The enthralling beauty of California is the principal reason that, from the last part of the 19th century to the early decades of the 20th century, California art was characterized by a large number of light-filled landscape paintings. 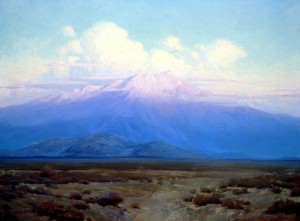 Victor Clyde Forsythe, "As the Desert Awakes", 1922. All images are courtesy of the Irvine Museum.

The clear and intense light of California, that appears so often in these paintings, defined the landscape.  The biblical analogy of light as the creative instrument is appropriate to the California landscape and the way artists addressed it, for without that unique light and the divine energy it represented, the land would not exist.

Thus, for the artist, the objective was to capture this visually striking light on canvas quickly, before the light changed.  The only way to truly capture this light was to be a part of that same landscape, that is, to get out of the studio and to paint outdoors, or to use the original French phrase for this art style, en plein air.

Of the many varieties of landscape available to the artist in California, very few places offer such intense and consistent quality of light as the desert.  This unique light, approaching a crystalline purity, allows one to see mountains as far as a hundred miles away and more.  Yet, that same light can be deceptive, especially when heat radiation, invisible at close reach, produces illusionary lakes and non-existing forms in the distance.

Desert temperature can rise as high as 140 degrees in the summer, due not only to direct sunlight, but also hot blowing winds and heat reflecting off the extremely hot desert sand and rocks.  Taken together, the unwavering heat and blinding glare of the desert affect the apparent color of everything in sight.

There are numerous tales of artists battling difficult desert situations to paint outdoors.  On one of his first trips to the Grand Canyon, William R. Leigh (1866-1955) had to stop painting because it was so hot that his paints melted and rolled down the canvas. 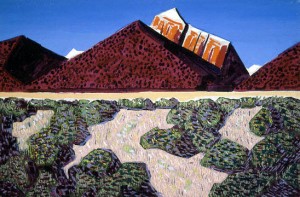 In the United States, the relatively unexpected emergence of the desert as subject for artists occurred in the late 1800s.  Prior to that, some desert scenes that found popularity were views of North Africa and the Middle East, presented as mysterious and uncivilized places, tinged with the flavor of adventure and peril.  The great boom of American desert painting came with the development of the railroads in the 1870s and 1880s.  The Santa Fe Railway offered free passage and board to any artist willing to travel the route and paint views that would later be used in advertisements and calendars to beguile tourists to take the train to the Southwest.

Today, the artist comes to the desert to paint its solitary beauty.  Of the large numbers of painters who paint the desert, relatively few of them confront it head-on, or en plein-air.  This Renaissance of traditional painting styles and interest in the beauty of landscape coincides with society’s growing awareness and concern for the natural environment, a mutuality between society and the artist that has become more and more clear.

At the same time, the vast and timeless allure of the desert as a subject for art endures.  Today, artists throughout the country come to the desert and take up the challenge posed by this picturesque, yet unyielding natural environment, with its oppressive heat and its intense, vividly lucid and at times fickle natural light.  There is little doubt in my mind that several of these current artists will one day reach the distinguished level of Paul Grimm, James Swinnerton, John Frost, and others of the previous generations.

Jean Stern is Executive Director of the Irvine Museum. 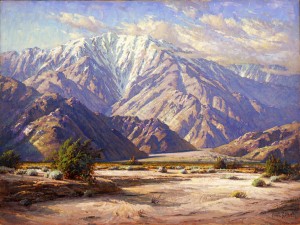 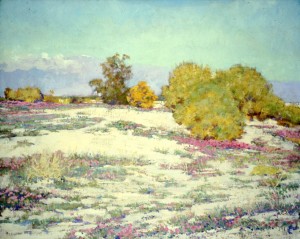 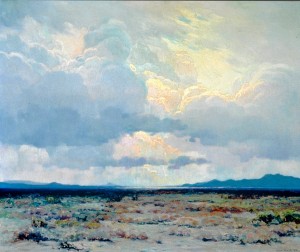 9 comments for “Plein Air Painting in the Desert”