During a fifth grade field trip in 1966, Sharon Ellis’ class shuffled into the San Diego Museum of Art and listened dutifully as a docent told the children why they should admire a painting featuring a young girl as the subject. Sharon wasn’t so sure. She decided she didn’t like the painting–or the girl in the painting. 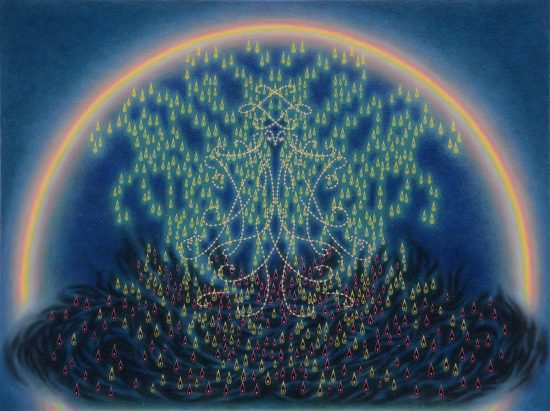 Unnoticed by the others, she escaped to a side hall and stood rapt and alone in front of an urban street scene by Charles Burchfield. She had been drawing for years and knew that the goal was to make a building look like a building. But here the building was overshadowed by the moods of night and rain. Physical reality was no longer the highest goal. “I felt like I understood something I hadn’t understood before,” Ellis said recently.

The moment propelled her into a career as an acclaimed contemporary landscape painter. She takes the elements of nature–stars, clouds, wind, Joshua trees–and makes them spin and hum. Ellis has appeared in a gallery show alongside her childhood hero, visionary watercolorist Charles Burchfield, as well as sharing wall space with Agnes Pelton and Georgia O’Keeffe. She has herself been compared to Pelton and Burchfield, as well as to the contemporary art world box office star Vija Celmins. “Sharon is a kind of in-house, ‘best kept secret,'” says University of New Mexico art history professor Libby Lumpkin. “Artists revere her.”

Lucky for us, the child-rebel is now living in Yucca Valley. Her move from LA was prompted partly by memories of childhood visits to her great-aunt who lived in Wonder Valley, as well as a craving for “big sky views of the desert.” 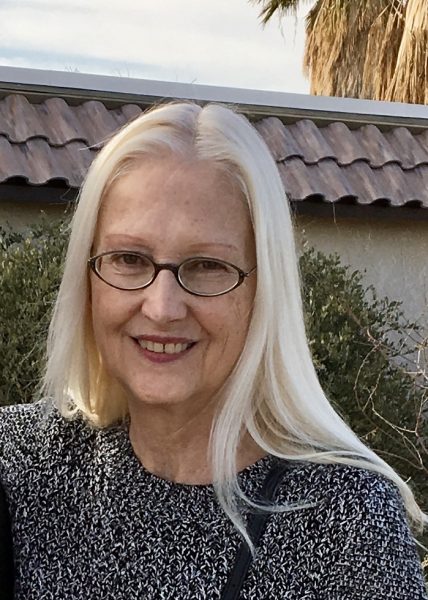 As I drove up Hwy 62 to meet her one day recently, I felt as if I was approaching the mountaintop lair of a guru who held the key to a pressing question. I’m not an artist and I wasn’t looking for tips on technique. But I’d give a lot to see the world as Agnes Pelton or Sharon Ellis sees it: a paradise, as close to the divine as we can get. How can I see like that? I can’t ask Pelton but I thought maybe Ellis could tell me.

I parked in front of a mid-century home on a hillside with a view of Joshua tree-dotted hills below. Ellis met me at the screen door. Any apprehension I felt about approaching a sage was dispelled by a committee of seven roving house cats. A crew of talkative pigeons—caged in a sun porch overlooking the backyard—further conveyed the message: Be at ease. The beasts are in charge here.

Ellis is blonde, friendly and down-to-earth; she bears an unmistakable—and oft-noted—resemblance to Meryl Streep. Her home is modern and spare, with few paintings on the walls. One of the exceptions is her Night’s Regent, which hangs by the dining table. We sat beside the painting of Joshua trees, lightning, and glowing datura inspired by a poem by Charlotte Smith, a writer who influenced Wordsworth. Many of Ellis’ paintings have roots in nineteenth century Romantic poetry, which celebrates nature and imagination. “Tumult in earth, calm in heaven,” Ellis says, summing up the poem’s message. 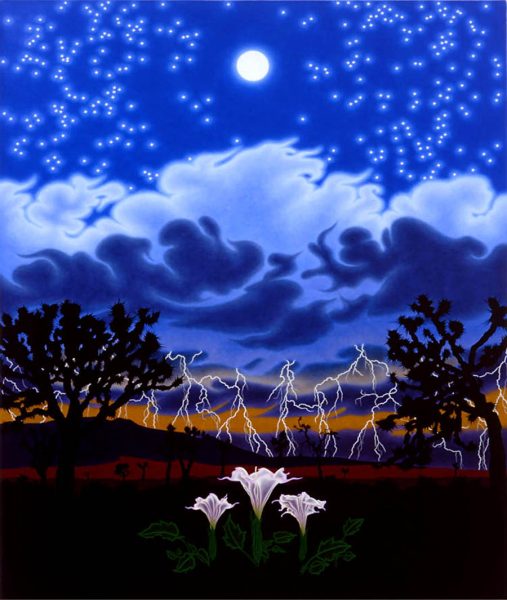 As the pigeons cooed and fluttered, Ellis told me she previously lived in Silver Lake. She and her husband, assistant sound editor Chris Weir, moved to the desert six years ago. She hasn’t been out in the community much, as she was consumed with caring for Weir as he battled the lung disease pulmonary fibrosis. He died on Christmas Eve in 2016 and Ellis is now attempting to return to her painting routine. 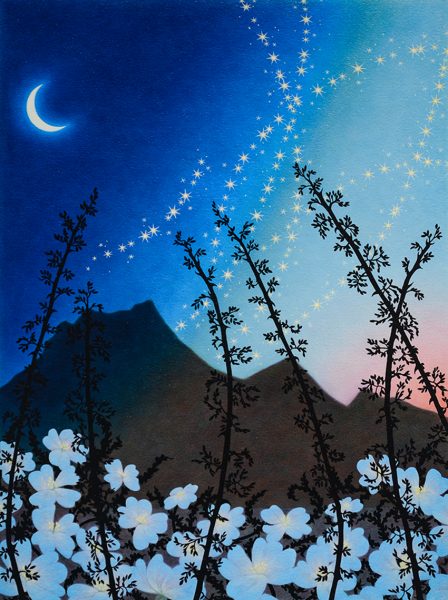 Blue Hour, 2017. From a series Ellis painted following the death of her husband, Chris.

She grew up in Virginia where her father was a chief petty officer in the Navy; her mother, a former schoolteacher, stayed home after having children. “My father was a huge fan of the National Park system,” she says. “I got to see lots of big things.” With five kids crammed in the back seat of a hot station wagon, Ellis got her introduction to nature via the Great Smoky Mountains, the Grand Canyon, Muir Woods, Yosemite and Big Sur. 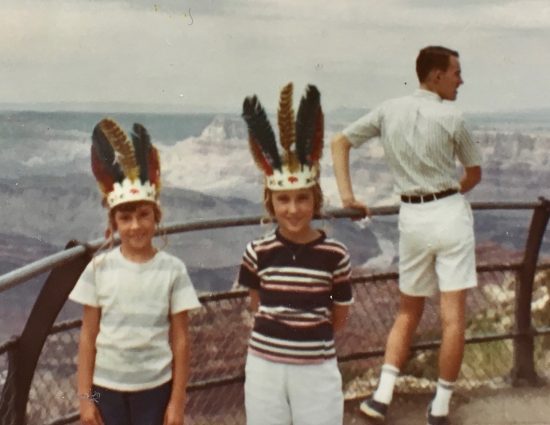 Sharon Ellis, right, with her younger sister Becky and her brother David at the railing. Grand Canyon, 1964

She decided to be an artist in the second grade and by the fifth she was drawing relentlessly and studying her brother’s Time-Life art books. The family had moved to San Diego by this time, and she was soon introduced to the desert via her father’s aunts, Daisy Culbertson and Leila Ellis.

Daisy taught third grade at Twentynine Palms Elementary School and went rock-hunting on her days off. Ellis remembers being impressed with her desert rat relatives, the great empty spaces and the tiny homestead shacks (cabins left over from the Small Tract Act of 1938). “Who lives in these little houses?” she and her sister wondered as they visited Daisy in Wonder Valley. 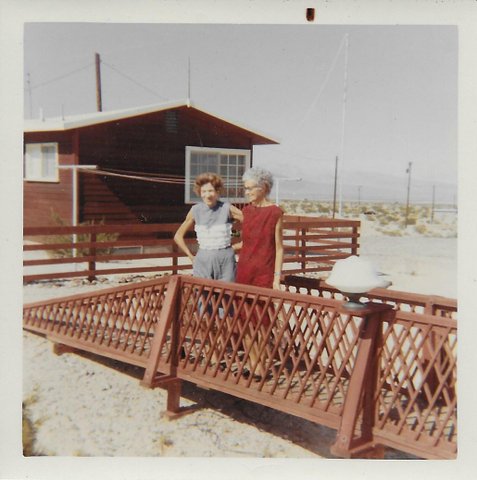 Leila once waved a shotgun to shoo off Hells Angels. Daisy owned a complete set of National Geographics and a brand new Dodge Dart, white with red leather interior. It all made an impression. “I still think of the desert as being romantic and wild,” Ellis says.

She met her husband-to-be, Chris, at UC Irvine where she earned her BA. The couple later lived in Berkeley, where Ellis completed a Masters of Fine Arts at Mills College. She and Chris were visiting the Oakland Museum one day when she saw her first Agnes Pelton painting–Orbits. “What is that?” she wondered. “It really struck me as an oddball painting–beautiful but weird.” Pelton has remained an inspiration over the years. 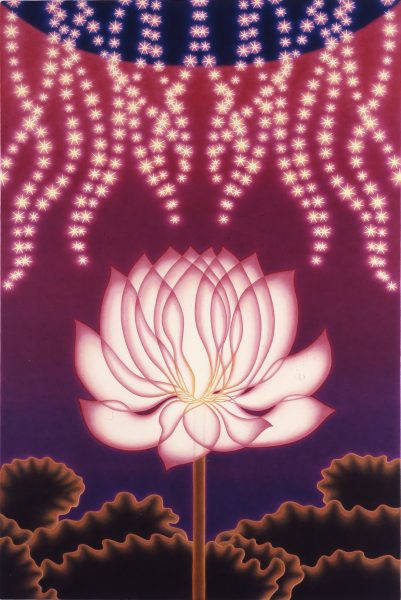 The couple moved to New York in 1984 so that Sharon could pursue her art career, but she found her classroom peers were obsessed with conceptual art and had no time for landscape. Once again parting from the herd, she turned resolutely to landscape, a move that has slowly brought her respect and even adulation. Before moving to the desert, she lived in LA for 25 years and exhibited widely there. In 2002, the Long Beach Museum of Art staged a ten-year survey of her work.

Her technique involves placing dozens of layers of alkyd—a fast drying paint—on paper or canvas in a process that can take as much as a year for one small painting. (Regarding Night’s Regent, Ellis says, “that easily has 60 layers of blue.”) Her work has been called meticulous and time-consuming. For all the time and thought she gives to the paintings, she seems to give none to self-promotion. “I want to make enough money to keep painting; that’s all I care about,” she says. 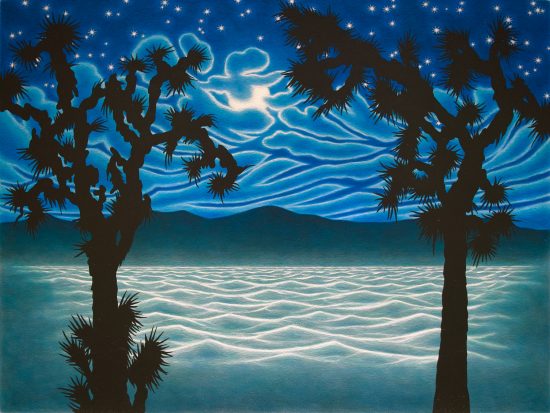 To art historian and curator Libby Lumpkin, Ellis has things in common with Vija Celmins. “Both artists spend many, many hours laboriously producing relatively small paintings and drawings of nature,” Lumpkin says. “I used to hear artists say the same thing about Vija that I now hear them say about Ellis—actually the very same words—she’s an ‘artist’s’ artist.

“Ellis seems to draw on nearly the whole history of landscape painting, at least since the German Romantics,” she adds, citing early 19th century artists Otto Runge and Caspar David Friedrich, along with the American Luminists; toss in Charles Burchfield and his “animated landscapes” and even Light and Space artists James Turrell and Robert Irwin. She blends these strains and “somehow makes the genre of landscape relevant when hardly any other artists are even trying to do so,” Lumpkin says. 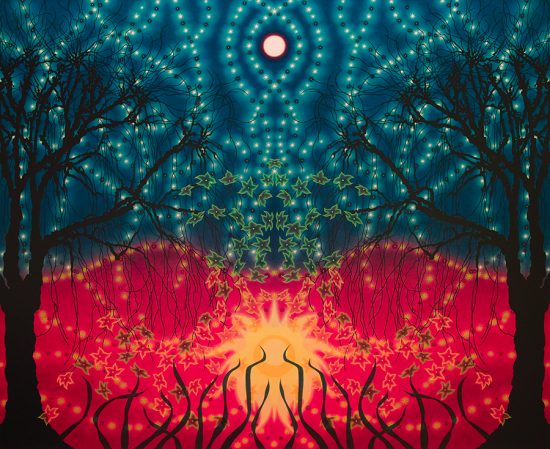 Over the years, critics have put many labels on her work–Luminist, post-Symbolist, transcendent, visionary, mystical, paranormal, abstract, etc. All that is fine, Ellis says, but just don’t be too sure: “After all, I don’t completely understand myself.”

We’ve been visiting for awhile and I haven’t yet asked the artist how she can look at a tree and see an invisible world twined in the branches. As we’re sitting next to a painting featuring moonlit datura, a hallucinogenic plant—and because her paintings have been called psychedelic—it seems a good moment to broach the subject: Does her vision come from psychedelics? Is that the key? No, she says matter-of-factly, she only took LSD once and she was afraid of it. So, no epiphany via drugs.

Then how about religion? Is that the source of her expanded perception? She says she grew up in a strict Southern Baptist home and—predictably—she rebelled. These days she considers herself a spiritual person who intensely dislikes religion. 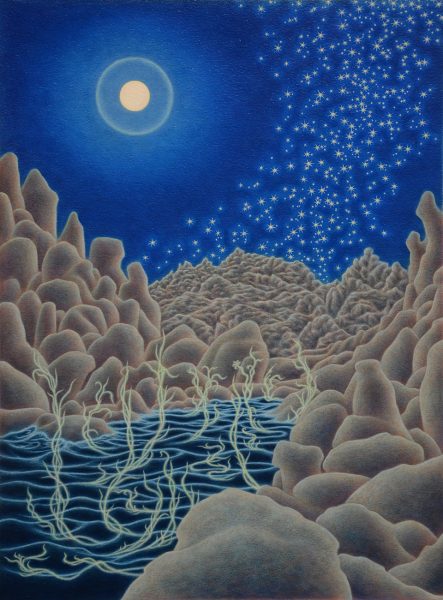 If not LSD or religion, then how does she see the world in such sublime beauty? The revelation: “I don’t exactly see it that way. I make it up.” Her process is not unlike a fantasy writer—say Ursula K. Le Guin—who also “makes other worlds,” she says.

My worldview shifts. What if people like Agnes Pelton and Sharon Ellis don’t have special sensory apparatus? Instead, they rely on imagination. Ellis uses hers not for ornamentation but to tap into the essence of things. Imagination itself is a product of nature, she says.

Collectors Hal Nelson and Bernard Jazzar concur: “What has always fascinated us about Ellis’ work is its direct engagement with nature. While her paintings initially appear to be imaginary—fantastical and somewhat surreal—they are invariably grounded in landscape and often allude to the vistas and skyscapes surrounding her home in California high desert.” Nelson was director of the Long Beach Museum of Art at the time of Ellis’ survey exhibition there. Jazzar, curator for prominent Los Angeles collectors Lynda and Stewart Resnick, has acquired several Ellis paintings for the Resnick Collection. 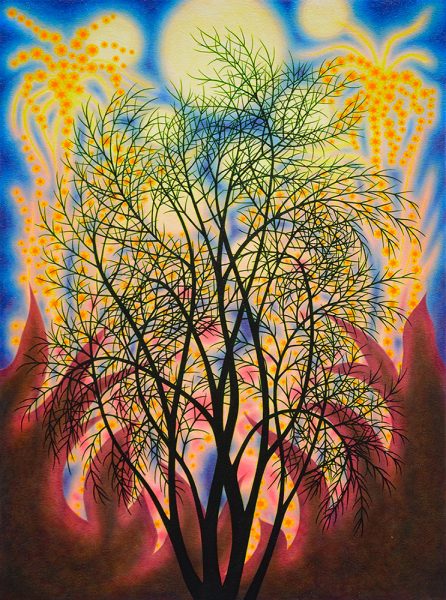 Imagination can trend ecstatic or dystopian, but in Ellis’ case, joy wins every time. “Sharon Ellis may be making the most positive, least needy paintings in the world,” wrote the influential art critic Dave Hickey.

The question for Ellis is the one Albert Einstein famously posed: “Is the universe a friendly place?” Despite the loss of her husband—which on some days still leaves her feeling “worthless”—she says: “I have to believe it is. Maybe I make it a friendly universe?”

I left Sharon’s house with a new appreciation for imagination, for nineteenth century poetry and for sci-fi and fantasy, genres I’d previously overlooked. I was clutching a list of writers Ellis enjoys, intending to explore them for myself: Philip Pullman, Algernon Blackwood, Clark Ashton Smith, Tanith Lee, Philip K. Dick, Neil Gaiman.

Of course the best prompt for my new worldview is Ellis’ work itself. If I study a painting like Night’s Regent long enough, I might be able to take a walk through my mid-mod Palm Springs neighborhood and see the lightbursts and glowing threads that were there all along: a friendly and electrified universe.

Sharon Ellis is represented by the Kohn Gallery in Los Angeles: 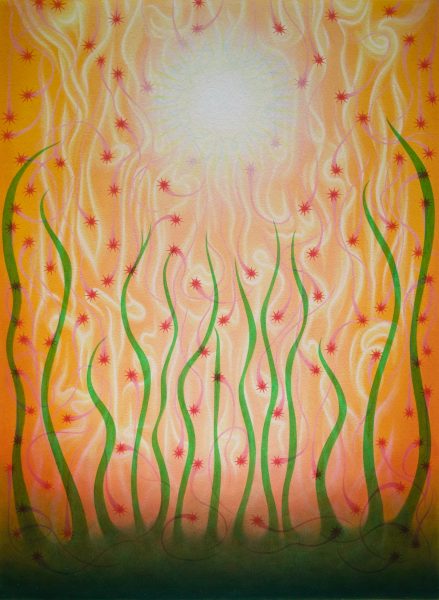 6 comments for “Friendly Universe: The Electric Landscapes of Sharon Ellis”