Editor’s note: Agnes Pelton would have been pleased by the mass adulation coming her way. But she would be just as delighted by the personal tales that are cropping up. Pelton’s paintings seem to accompany select people in their lives, leaving a far more intimate imprint than a show at the Whitney. Here is one such story by a California woman who asked to remain anonymous due to security concerns given the current value of Pelton’s abstractions. 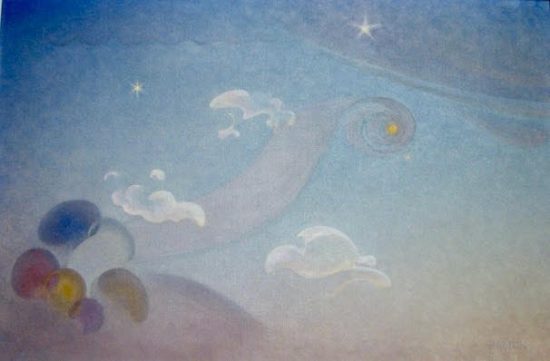 My Agnes Pelton journey began in the late 1970s in Santa Monica/Venice.  I ventured into a shop that specialized in vintage items from the ’30s and ’40s.  To the best of my recollection, two women managed the place and it was called In One Era. They had a great eye for quality items—furniture, vases, artwork and more—all in superb condition.

I was drawn to two intriguing paintings hanging on the wall to the left as I walked in—both by an artist named Agnes Pelton.  I loved the paintings, but could barely afford one.  After much dithering and indecision, I finally purchased the piece called “Voyage.”  I liked the painting’s sweeping movement, the sense of ascendancy to the heavens.  I paid $200.

The proprietors said that Pelton was a California artist of the art deco period.  But otherwise it seemed that little was known about her work.

I relocated to NYC shortly after buying “Voyage” and a series of odd coincidences followed–coincidences that I’ve always associated with this painting.  I took a chance and moved there without a job or a permanent place to live and few friends.  A gruff recruiter arranged for an interview at a prestigious corporation, although I was warned that my chances of landing the job were slim at best.  To my great surprise the HR person in charge of hiring for the position was someone I’d met several years before, in another city thousands of miles away.  Thus, I was hired.

In spite of the challenging rental market, I found an apartment within a week or two after answering a small ad in The Village Voice for a sublet of a sublet.  The actual lease, I discovered months later, was held by someone I’d met at a Christmas party—again, in another state several years before.

Someone at work handed me a flyer about a weekend workshop featuring leaders in the human potential movement: Willis Harman, David Spangler, Barbara Marx Hubbard, and Jay Ogilvy.  I didn’t know anything about them, but the subject matter sounded intriguing so I registered. There I struck up a conversation with a lovely person who happened to sit next to me in the auditorium. (I subsequently learned he was immersed in Theosophy and Alice Bailey, an early writer on theosophical subjects.)

He urged me to contact a friend of his in NYC.  I scribbled the name and number in my notebook and after a month or two gathered up sufficient nerve to make the out-of-the blue call.  The connection was instantaneous; we married a year later.

My husband at the time was studying with “K,” a spiritual/meditation teacher steeped in Theosophy–a subject close to Pelton’s heart.  My husband introduced me to the Roerich Museum in NYC.   I bought a copy of Agni Yoga, which is still in my library today.

From there I began to explore Roberto Assagioli’s active meditation techniques, the meditation on the unfolding rose being one of his most well-known. The rose also figures in Pelton’s work, as in the painting “Incarnation”.

Eventually we relocated to the West Coast, where we enrolled our child in a Waldorf School.  Through various moves and stages “Voyage” stayed with me.  Friends sniffed at it, called it tacky.  But no matter—the painting continued to occupy a prominent place in our home.

Fast forward to 1997 or 1998.  Mother’s Day.  We stopped by the Oakland Museum to see their wildflower exhibit.  The day was bright and warm, so we wandered into the cool, dark galleries.  One painting looked very, very familiar.  My jaw dropped. It was a Pelton titled “Orbits.”  That evening, I called the museum and left a message for the curator.

He returned my call the next day.  Possibly I spoke with Michael Bell (or perhaps George Neubert) but to the best of my recollection it was Michael. 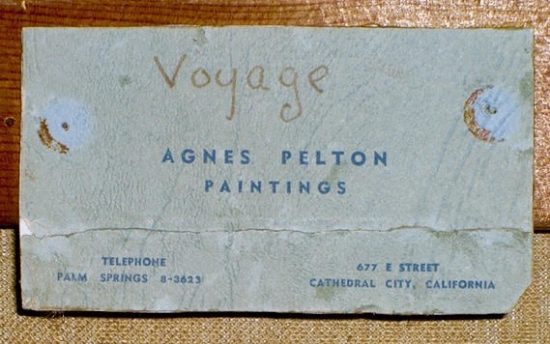 The business card attached to the back of Voyage.

He asked how I came to acquire the painting.  When I told him about the shop in Santa Monica/Venice many years ago, he said (paraphrasing): “We bought ‘Orbits’ from the same second-hand shop.  There were two paintings hanging on the wall.  We tried to buy the other, but were told it had already sold.”

Michael recommended that I take the painting to Penny Perlmutter for an assessment.  Eventually, I drove to San Francisco with “Voyage” wrapped in a clean cotton blanket and talked with Penny—a collector who had written a thesis on Pelton’s work—for two hours.  It was an enlightening visit to say the least.  This was when I first learned of Agnes Pelton’s life-long interest in the occult.

Penny mentioned that Pelton had been affiliated with the I Am movement in Pasadena.  By coincidence, “K” was also part of the I Am group in Pasadena, probably in the late ’30s onward.

Penny snapped some polaroids and documented “Voyage” as an authentic Pelton.  She said she was unable to find any reference to the painting in Pelton’s notes and “Voyage” is undated. On the back of the painting, the title was written in lovely script. Agnes Pelton’s card was attached, listing her address and phone number in Cathedral City. Sadly, Penny passed away a few years later; I don’t know what became of her archives.

These days “Voyage” is displayed in my living room above the sofa. The focal point of the room, it’s always in view. Agnes Pelton is a quiet, steady presence in our lives.

Since 1998, I’ve learned that Pelton’s paintings were expressions of her spiritual explorations. It’s astounding to me how she was able to capture the ineffable so energetically through her art.  I’ve been extraordinarily blessed to have one of her works in my life.

6 comments for “Voyage: One Woman’s Journey with a Forgotten Agnes Pelton Painting”