(This article first appeared in The Sand Paper, the newsletter of the Anza-Borrego Desert Natural History Association.)

Around 1930 a young botanist from Chicago came to the Borrego desert to dig in the sand and collect native plants. At some point hunting for tansy-mustard and tidy-tips wasn’t enough for her, so she took out her easel and began painting the dunes and smoke trees.

Last month I picked up one of her 1930s Borrego paintings on eBay for $99. When I hung the painting on my bedroom wall, it immediately connected me to Edith Purer herself (she became California’s first woman ecologist), as well as to the plants, topography and mood of Anza-Borrego. I live in Palm Springs, but the last thing I see at night is the Borrego desert. 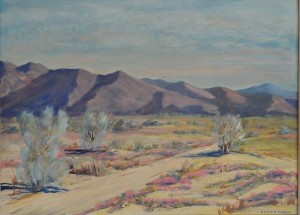 Painting of the Borrego desert, circa 1930s, by botanist and ecologist Edith Purer

That’s the beauty of the early desert paintings: Their ability to connect you to landscape and history. Though desert paintings are soaring in popularity with collectors, you can still scour thrift shops and online sales and pick up lesser-known artists for less than $100.

The early California artists, also known as plein-air painters (plein air means “in the open”), are the original conservationists. The paintings of Albert Bierstadt and Thomas Moran, for instance, showed the world what was worth saving in Yosemite. In the Coachella Valley where I live, the early artists preserved in paint fields of verbena and cholla that are gone forever due to development.

In Borrego, you are lucky to have many of the original landscapes intact. In many cases, you can still locate the precise arroyo a painter captured, or stand in the exact spot the artist stood.

After landing an original Edith Purer, I started to wonder what other painters may have worked in Borrego. The only name I knew of was the irrepressible stagecoach painter Marjorie Reed, but there had to be more. After all, many now-famous painters captured the deserts just over the hill in the Coachella Valley—Jimmy Swinnerton, Paul Grimm, John Hilton.

North Shore art collector Allan Seymour told me the Palm Springs artists for the most part did not travel to Borrego. “The toe of the Santa Rosas made it a much longer journey for Palm Springs, LA or Laguna painters to journey all the way to Anza-Borrego,” he said. “This made the area a San Diego painters’ Mecca.”

Fortunately for Borrego history, San Diego was a hotbed of landscape painting in the early decades of the 20th century; and the most famous artists—Alfred Mitchell, Maurice Braun and Charles Fries—fell in love with the Borrego desert.  At the time Edith Purer was scouting the dunes, Charles Fries was sketching at Coyote Wells while dodging falling boulders, coiled rattlesnakes and gem smugglers.

Alfred Mitchell brought carloads of his lady art students over from San Diego; some became avid Borrego painters themselves. William Bartko, who died in Borrego Springs, was out painting the favorite plant of the painters—smoketrees. While the coastal painters worshipped the eucalyptus, the desert painters could not get enough of the scrubby, shape-shifting smoketree.

Another San Diego painter who frequented Borrego, Charles Reiffel was compared to Cezanne and Van Gogh for the boldness of his imagination.

Maurice Braun, most revered of the San Diego artists, was heavily influenced by the School of Theosophy at Point Loma (known as Lomaland). With the mystical tenets of Theosophy guiding them, Braun, Alfred Mitchell and other Theosophists ventured over the hill to the desert. Amy Difley Brown, one of those who attended the Theosophy school, often camped in the desert with her granddaughter, Lynne Salmon, in a little teardrop trailer. Salmon, who lives in La Mesa, told me one of their most memorable campouts was going to visit Brown’s friend, Marjorie Reed, at Campbell Ranch.

What I’ve told you here is just an overview—and hopefully a temptation. There is plenty more to be discovered about the Borrego painters. A good place to start is The Journal of San Diego History (many editions are available online) and the website www.AskArt.com that compiles information about thousands of famous and obscure artists.