Art experts predicted that Agnes Martin’s painting “The Desert” would bring $4-6 million at a Sotheby’s auction in May. Instead, the minimum price was not met and the painting remains unsold—though other Martin paintings sold at Sotheby’s and Christie’s auctions in May. Some critics said the large work did not sell because it’s too overwhelming to be appreciated outside a gallery setting.

Agnes Martin as a young artist in New York

Martin lived in the New Mexico desert most of her life, dying in 2004 in Taos. She is linked to the Cathedral City painter Agnes Pelton by a shared first name, a devotion to the desert and a joint exhibition at the Orange County Museum of Art in 2009, which brought renewed attention and prestige to both artists.

Martin’s paintings are an intensely abstract take on the desert, a vision built around lines and grids. The New York arts critic and feminist author Jill Johnston called the paintings “mystical geometries”. For a vivid and forgotten portrait of Agnes Martin, don’t miss Johnston’s essay about a road trip to visit Martin in New Mexico (from Johnston’s book “Gullibles Travels”). 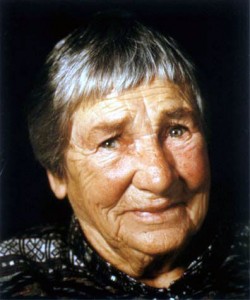 Johnston knew Martin when she was an artist living in a New York loft, then years later resolved to make the trip to the tiny town of Cuba, NM, where Martin was living as a hermit in an adobe hut. Johnston reveals her awe of Martin’s talent and describes the artist’s fleet of five vehicles “in perfect working order”, including a 1948 Chevy pickup that doubled as the artist’s bedroom.  During the visit, the New York intellectuals spent time plinking at cans with Martin’s BB gun.