UPDATE:  Louise Tennyson Goble died on July 15, 2010, in Palm Springs. She is survived by her husband, Floyd Goble of Palm Springs, and son Gary Pierce of New York City, along with other relatives.

This June CDA recognizes two classic desert painters associated with the venerable Desert Art Center in Palm Springs. Sally Ward turned 101 this month, and is still painting. She moved to Tucson in 2006 and is now living at the home of her daughter, Sue Ward. 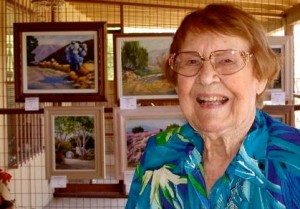 Sally Ward’s friend, Louise Tennyson, had a gallery in downtown Palm Springs in the 1980s and is known for her sweeping landscapes characterized by John Hilton-style pastel tones. A large Tennyson landscape hangs in the meeting room of the Indian Wells City Hall. In recent weeks, Louise Tennyson has been hospitalized and is in poor health. 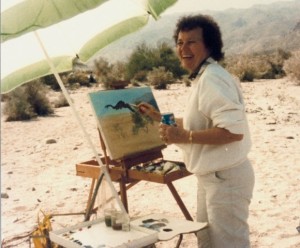 The Montana-born painter Sally Ward moved to Palm Springs in 1973 and became part of a pack of avid desert painters who roamed the dunes and boulders. Louise Tennyson joined the pack in 1976.  The two friends often painted with the late and noted painters Darwin Duncan and Karl Albert.

Louise Tennyson can tell you all the best places to paint, having long led the Desert Art Center’s paint-outs. Decade after decade, painters have returned to the same choice spots. Shaver’s Well in the Mecca Hills, for instance, is a favorite of Tennyson’s as well as Jimmy Swinnerton’s before her. And Sally Ward can show you how to keep trying. “I try everything to get that light,” she said not long ago.

We thank both painters for their dedication to the desert and their contributions to the Smoketree School.