I’m sitting at Gramma’s restaurant in Banning, California, with the 92-year-old artist Carl Bray across the table from me. The legendary “smoketree painter” of Indian Wells, Carl is one of the last of the early desert artists. With his huge railroadman’s hands, he pushes aside the plates and unfolds a map of New Mexico to show me where he first steered “Brownie”–the esteemed Western painter R. Brownell McGrew–into Navajo country. (Brownie lived in Cathedral City in the 1950s and then in La Quinta—read more about him here soon.) 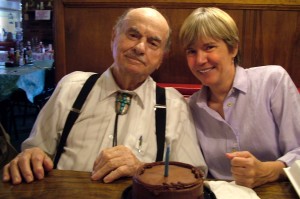 Carl Bray and Ann Japenga at Gramma's restaurant in Banning. Photo by by Kim Housken.

You go down into what they call the Checkerboard country, Carl says, and there’s a trading post there called Counselor’s, named for a Kentucky-born pelt trader. Carl and his late wife Luella often traveled to Navajo country with their church group and Carl did odd jobs for the families on the reservation. His “honey do” list had him driving around on unmarked roads in a big old Chrysler with air let out of the tires for desert driving. He was often lost.

Knowing Brownie was looking for Indians to paint, Carl once said: “Come with me out to Checkerboard country.” There Brownie found his muse. His mystical, almost psychedelic paintings of Navajo Indians draped with turquoise now sell for more than a home in the suburbs. 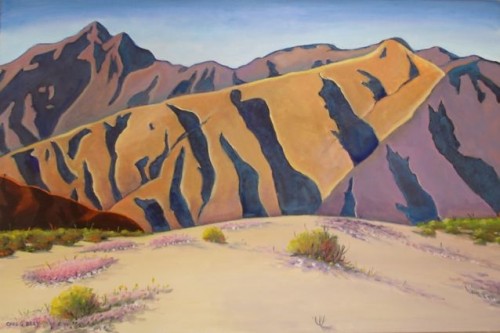 Carl had a gallery in Taos for 40 years, spending summers there and winters running his gallery in Indian Wells. The Indian Wells gallery still stands —but barely. The City of Indian Wells has been working overtime to tear down this roadside landmark on Highway 111.

Carl and I continue our conversation on long drives to a little apple pie place in the mountains above Banning. He likes to go to lunch at a favorite café where he used to go with Luella. With a friend at the wheel, I’m squished in back with Carl and the other passengers, leaning one way and another on the turns. The art talk rotates with train talk. Carl tells us how to get a train up the infamous Beaumont Pass (it’s nothing to have ten helper engines), then shares the fact that the painter Fred Penney cooked up weenies in his VW camper on paint-outs to feed the starving artists.

From talking to Carl, the picture that emerges is of a great brotherhood (and occasionally a sisterhood), a bohemian enclave, a rich roiling cast of landscape painters in the Coachella Valley, the big names all connected through a complex genealogy. Most of them were of modest means or downright poor. Bill Bender camped under an Ironwood tree where the Living Desert is today; his dinner was a bag of grapefruit. Some of the others sold their art on the roadside out of trucks that doubled as homes.

I first learned of Carl– like so many others—from the palette-shaped sign outside his roadside home and gallery on Highway 111: “Painter of the Smoketree”. While Indian Wells once revolved around a date shop, a snake barker, a House of Purple Glass and other humble attractions, Carl’s home and gallery is today the last remaining scrap of the original village that would morph into one of America’s glitziest resorts.

One day years ago I stopped in at Carl’s gallery and agonized over whether to drop $100 for a painting. I’ve never regretted the purchase.

Bray’s paintings are bold and full of a special language—the language of Carl. Railroads strain (don’t say “chug”; the railroad guys hate that) through outsized passes, with no other hints of civilization. Just a hardworking engine, a line of track, open desert and a smoke tree—that’s it. The colors are sometimes childlike and wistful. Collector Allan Seymour says Carl’s folk sensibility has earned him the status of a Grandma Moses of the desert.

His style is seemingly uninfluenced by trends or other artists, though Carl did know many of the big names: Maynard Dixon, John Hilton, Marjorie Reed, Sam Hyde Harris and others. In his private vocabulary, messages come up canyons to show you the way. I have a painting of his, “Voices Up the Canyon”, in which a Navajo girl sits on horseback near dark, waiting for a message telling her which way to go. You know the answer will come. In Carl Bray’s world, there’s always a right way to go.

As I get to know Carl, I find he does live in a world of distinct messages and clear right and wrong, all influenced by his religious upbringing. He and Luella sang in their church choir; and he loves to point out his church on those drives to Oak Glen. Once I asked him if he was troubled by the possible demolition of the Indian Wells home he built by hand. “I’ve got higher things on my mind,” he said.

Carl Glen Bray was born in the Ozarks, and never lost his slight Okie inflection and warm country manner. Add a turquoise bolo tie and other Taos touches, and you have an amalgam style. The first thing you notice when you meet him is his massive Casey Jones hands, and his wry wit. He tests a stranger right off to see if he can joke with you; after that you’re good friends.

He came to Indio in 1936 and got a job on the Southern Pacific railroad, working as a switchman, brakeman, herder (the man who links and uncouples engines) and just about every other thing. He started painting on the job. Somewhere there are Carl Bray sketches on boxcars and even on switch shanties along the line. His son, Patrick, also a railroad man, tells me those shanties have probably been hauled off or demolished, but if anyone has an old switch shanty adorned with an original Carl Bray in their garden–please get in touch.

Around 1940 he was working on a railroad bridge along the track in Mecca when he saw a scrawny painter sketching outside a small shack. He had heard the name—Maynard Dixon. Shyly, the fledgling painter Carl introduced himself. Dixon’s advice to the wet-behind-the-ear’s artist? “Get out of this business while you can.” Dixon only stayed in the place called Desert Camp or Desert Kitchen briefly, but he painted some well-known scenes there such as “Destination Unknown”.

The obscure railroad siding by the Salton Sea took on an aura of painterly magic, becoming a place of pilgrimage for many artists—for reasons no one has quite figured out. Fred Grayson Sayre lived there and his landlady accepted his paintings in exchange for rent. The writer Ed Ainsworth (author of the pivotal book “Painters of the Desert”) later bought a place there, and Bill Bender, John Hilton and others of the Smoketree School all hung out.

Carl and Luella bought a plot of land along the highway in Indian Wells in 1953 for $1,000. He built his home there, reinforcing the pumice stone walls with discarded steel from the Indio railyard and hauling in stones from Berdoo canyon for the two-sided fireplace. He and Luella raised four kids in that home, with the spirits of Kavinish keeping them company out back. Kavinish was a major Indian Village, home of the famous walk-in Indian Wells. The Bray kids were always finding little arrowheads and piece of pottery in the yard.

Carl sold the gallery in 1999 and moved to Banning. Despite the city’s fervent efforts to tear his down his homeplace, it has hung on thanks to the Indian Wells Historic Preservation Foundation and devoted locals. It stands as a true monument to the Smoketree artists. It was right here, for instance, that Fred Chisnall came to die of a broken heart. Like Carl, Fred found something magical in the Indian Wells cove by Point Happy. He was always looking for the stagecoach loot hidden in the jagged hills. When Carl and Luella took him in, he’d been living on carrots and sleeping in the back of his truck, paintings tucked around him. They nursed him in his sickness; and he died in their upstairs room.

For generations of travelers, their first exposure to the beauties of a desert painting (or the desert itself) came on a stop at Carl’s highway gallery. The painter was something of a stand-up comic and entertainer; he liked to paint out front with a crowd around him. He’d paint a scene upside down and see if anyone noticed, or crack jokes about how  he painted with a palette knife–“the trowel and error” method.

Carl was always known as painter of smoketrees—it said so on his gallery sign–and in fact all the desert painters painted this scrubby bush, nondescript most times of the year, except when it erupts in gorgeous indigo blooms. Just as the coastal painters of Laguna became known as the “Eucalyptus School” the desert painters were the Smoketree School.

One day at Gramma’s I think to ask Carl why they all liked the plain little smoketree so much. He stops joking for once and goes into a reverie. “They get these silver tops on them and it looks like a halo. The shapes of them look like people dancing. And they’re so rare. The only places they grow are the Coachella Valley and Baja. They’re called spinosa…something. [The technical name is Dalea spinosa  –ed.] It used to just rattle off my tongue.”

Driving home from lunch I think about how much I owe to this man. He is my window to the desert artists and he’s taught me a lot about family, painters and trains. May your influence live on, Carl. Thanks for giving me a peek at a lost bohemia, and pointing out that the smoketree looks like people dancing—with a halo.

40 comments for “Carl Bray: Grandpa Moses of the Desertlands”