The most significant brick-and-mortar monument to the Smoketree School of desert painters is the Carl Bray home and gallery in Indian Wells, Calif. As well as being the last remaining scrap of the original village of Indian Wells, Bray’s gallery was home to the original Smoketree painter himself, a man who knew Fred Chisnall, Maynard Dixon, R. Brownell McGrew and many of the original desert artists. At age 93, Carl Bray still lives and paints in nearby Banning, California. 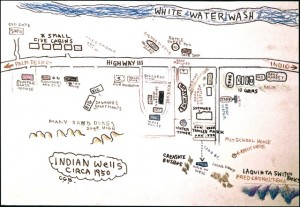 The City of Indian Wells has been trying to tear down Bray’s home for years (even while he was still living there) because its down-to-earth charm conflicts with their vision of a uniform and ultra-rich main drag. Fortunately, the Indian Wells Historic Preservation Foundation stepped in recently and the City was forced to comply with federal laws by preparing a report on the building before demolishing it.

The report says the home and gallery have been deemed “significant historical resources”, and further says the buildings “are in good overall structural condition”. The City of Indian Wells has the funds to save this structure, but the City fathers (no mothers) have been slow to catch on to the importance of the Smoketree Painters.

Now you have a chance to submit comments and help save the historic gallery. The recirculated Draft Environmental Impact Report is available online, and at the Indian Wells City Hall:

Written comments will be accepted through July 19 and should be addressed to: