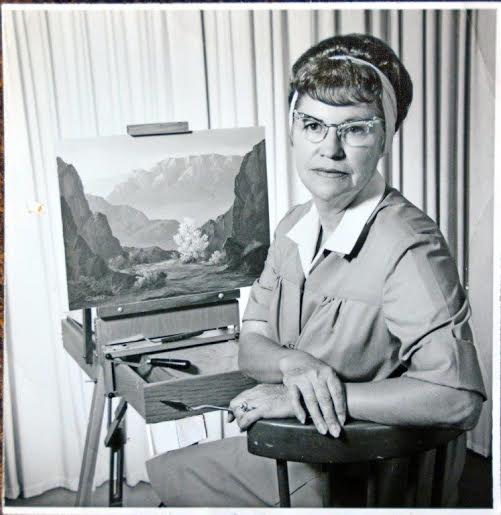 The weekend ritual of Ron Hurst’s youth involved driving from La Mesa through the San Diego backcountry to the Borrego desert, where he and his parents would head down a dirt road and make camp. His mother would set up her easel and he and his father would go off to practice tracking and rockhounding.

While learning all about obsidian, jasper and quartz, young Ron also unknowingly absorbed the texture and light of the desert. He was learning via the eyes of his mother, the desert painter Martha Eleanor Nicholson Hurst (she went by Eleanor Hurst). That buried knowledge came back to Ron recently as he embarked on his own career capturing the desert in painterly photographs.

“I had no idea I had learned some of this through osmosis,” says Ron. “It’s my mother who gave me the ability to see.” 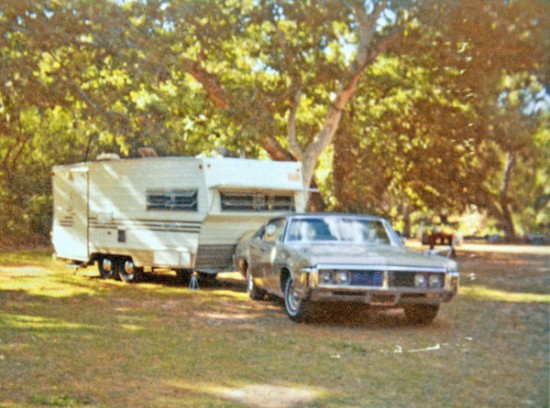 Eleanor Hurst is one of those names that haunts the margins of the Smoketree School. I’d heard of her in connection to Borrego artists, and now and then someone would say they’d found an exceptional Hurst painting…and did I know more about her? I did not. Until one day I got this note: “My name is Ronald Allan Hurst and I am the son of Martha Eleanor Nicholson Hurst.” Thanks to Ron we now have more of her story and a scrapbook documenting her career. 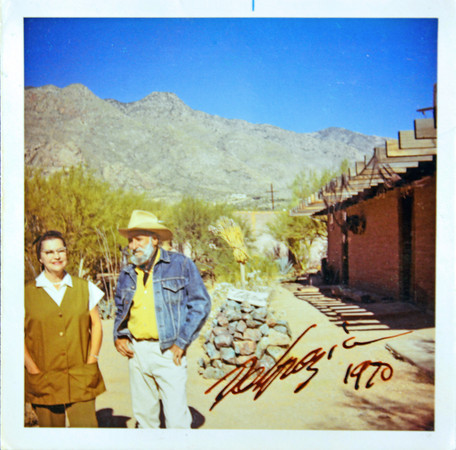 Eleanor was born in Ohio in 1913 and studied with Andrew Wyeth—along with Olaf Wieghorst, John Hilton, Ted DeGrazia and Gare Barks (wife of Donald Duck creator Carl Barks). For an undersung artist, these are some impressive friends. She married Ron Hurst, a woodcarver, and they settled in La Mesa and El Cajon. Ron senior was a desert rat who operated a steam shovel for the railroad, and later went on to work as an engineer on the Atlas Missile Program.

A woodcarving by Eleanor’s husband, Ron.

While raising her son, Eleanor showed her paintings in Borrego Springs galleries and with the La Jolla Art Association and the Desert Art Center. When Ron came home from school each day she’d whisk him into her studio to show him what she’d been working on: “Look at this, look at this.”

“She knew Olaf Wieghorst well and showed with him in El Cajon,” he says. “She showed and swapped paintings with Ted DeGrazia [the charismatic Tucson artist]. Mom studied with John Hilton and told me the sad story of him losing his sight in his later years. She was in love with his sand dune technique and of course–as you can see–his smoke trees.”

She worked mostly on masonite; her favorite subject was the San Diego backcountry from Julian to Borrego. The only hitch in her career as a desert painter was a desperate fear of snakes. During one class, she told the instructor that every time she backed up to look at her painting from a distance she heard a funny noise. “Upon closer examination,” Ron says, “the instructor discovered a large diamondback rattlesnake coiled up in the shade of the bush.”

The family also lived in Sedona for a time, at the base of Coffee Pot Rock, where Eleanor was acquainted with Western artist Frank McCarthy. “Both Mom and Dad worked for Don Hoel in his phenomenal jewelry shop there,” Ron says. 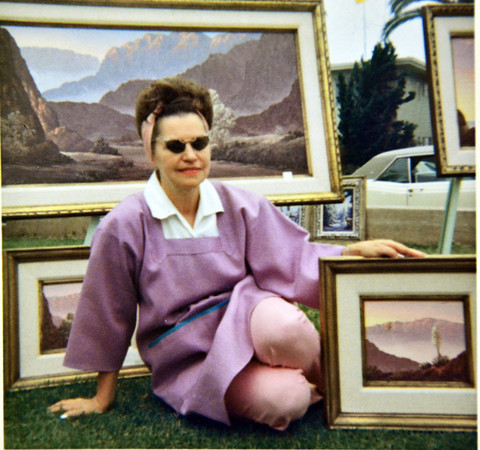 The younger Ron (he went by Rick at the time) went on to work as a communications specialist in the Navy, earning a bronze star for aiding wounded crew members during the 1967 attack on the USS Liberty. He recently retired from the Mare Island Naval Shipyard, where he was the nuclear supply director and a photographer for the base closure group.

Today, in the Napa Valley home he shares with his wife Debbie, Ron’s walls are adorned with paintings by his mother (she died in 1988) and her friends–Frank McCarthy, Olaf Wieghorst and others, as well as a book inscribed by Andrew Wyeth. The McCarthy print “Lone Sentinel” narrowly missed landing on Ron’s head during the recent 6.0 Napa earthquake.

At age 66, Ron has just started his own journey back to the desert. “I have so many memories of Borrego as a child,” he says. “For awhile, it seemed like we lived there because Mom would want to go every weekend—even in the summer.” 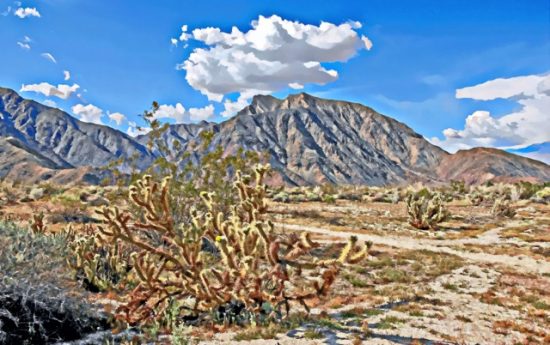 Ron recognized he didn’t have the painting chops of his mother but he knew what a desert painting should look like. Following the back roads of his youth, he studied Old Rain in the Face (Indianhead peak) and Font’s point just as his mother did. He takes photographs and uses digital technique to add texture and brush strokes. The results—looking something like the old colorized postcards–achieve the atmospheric range of his mother’s paintings. 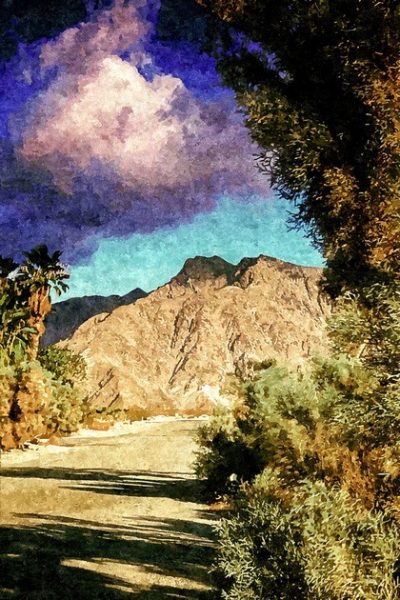 “I’m now visiting Borrego any chance I get, especially if the flowers are blooming,” he says. “I feel my mother is looking over my shoulder, helping me with my work and guiding me like she did when I was a boy.”

For more on Ron’s photography: 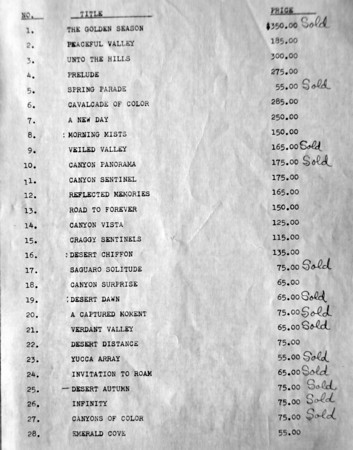 ← Hermann Fischer, Karl May and the Desert of Imagination
Gary Fillmore on Appraising Desert Art →

5 comments for “Eleanor and Ron Hurst: A Mother and Son Walk the Smoketree Path”