Oregon photographer Lin Moore explores the properties of desert rock in an exhibit at Maturango Museum in Ridgecrest through May 4th: “This Goodly Frame: Reveries Among the Origins of Order.” Moore has written about the link between poetry and photography and is especially inspired by the poet Robinson Jeffers, who lived in a rock tower in Carmel and could not say enough about rock: 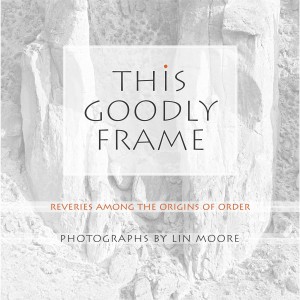 Starting with the basalt cliffs at Smith Rock near his central Oregon home, Moore graduated to the advanced academy of rock, the California desert. He had been working on ideas about scale (it’s an illusion, he says) when he first visited Death Valley last year. “Well, my mind exploded when I saw the place,” he wrote in an e-mail. “Especially the quality of that light. It’s like being in a soup of light. All of that infinity of surfaces reflecting an infinity of light—it’s more than I could have ever hoped for.”

In an introduction to the catalog accompanying the exhibit, Moore speaks of geology and geomancy—divination by signs in the earth. These twin tools are leading him into other areas of the desert; with luck we’ll see more of his explorations in the future. 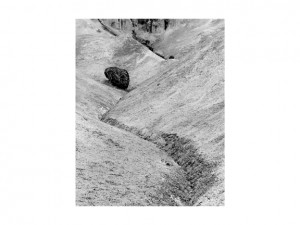 His current work appears in the Maturango Museum’s Sylvia Winslow galley. Winslow was herself a legendary desert painter who flew around Death Valley with her husband Slim, a bush pilot, in an airplane named Buttercup.

For more on the exhibit, or to order the catalog or other books by Moore, call the Maturango Museum (760) 375-6900 or visit their website: http://www.maturango.org/