Jolene Biss died suddenly on February 10th, 2011, after dropping off paintings at the Indio Date Festival, where she won three medals. Biss was a longtime member of the Desert Art Center in Palm Springs, an institution that has nurtured many important desert artists. 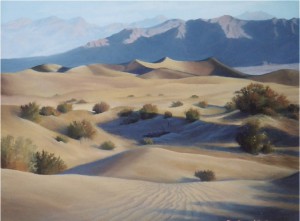 Biss was living with her husband, Don, in the same Banning cottage where her parents raised her. Before returning to Banning recently, the couple had lived for years in the Klamath River region of Northern California, where Biss discovered the basketry of the Karuk Indians and started painting baskets and the basket-makers themselves. “She just kind of leaned into it,” says Don.

Known for her intricate still-lifes, landscapes, and desert scenes, Biss also specialized in the baskets, which honed her abilities at capturing texture and light.

At the time of her death, Jolene was in discussion with a childhood classmate, Ernest Siva, about painting a mural of Indian life in Banning’s historic post office.  A well-known Cahuilla/Serrano elder, Siva is cultural advisor to the Morongo Band of Mission Indians. Biss also was scheduled to teach a pastel class at the Banning Center for the Arts; she had several desert paint-outs marked on her calendar.